FAKE EWES (YOU SEE WHAT I DID THERE)

It's from the Sunday Sport so I assume it's fictional but personally I'd just like to meet a man who can eat a whole sheep in 63 minutes.   His resemblance to Rishi is neither here nor there.

Posted by GeoffNIcholson at 5:14 AM No comments: 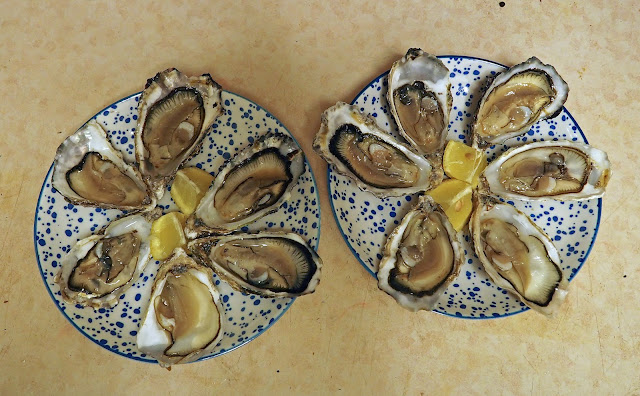 I’ve been slightly worried about the fish man down at the market.  The last few times I asked him for oysters he didn’t have any and he said he was having trouble getting them.  Well, the oyster shortage is over, at least for now, and on Saturday I bought a dozen and they were very fine.

They were £1,50 each, which was what I expected to pay, but it did cross my mind that 18 quid for two starters was a bit steep; though when you think you can expect to pay several quid for a single oyster in a restaurant, it seems a lot more reasonable. Bibendum is currently charging £4.50 for a Maldon oyster (which is what I believe my fish man sells) and they’re charging £8.50 for a Gillardeau.

All of which, naturally, reminded me of Brillat-Savarin and his oyster anecdote.  In the transaltion I have in front of me this reads.

‘In 1798 I was at Versailles as a commissary of the Directory, and frequently met M. Laperte, greffier of the count of the department. He was very fond of oysters, and used to complain that he had never had enough.

‘I resolved to procure him this satisfaction, and invited him to dine with me on the next day.

‘He came. I kept company with him to the tenth dozen, after which I let him go on alone. He managed to eat thirty-two dozen within an hour for the person who opened them was not very skilful.

‘In the interim, I was idle, and as that is always a painful state at the table, I stopped him at the moment when he was in full swing. "Mon cher," said I, "you will not to-day eat as many oysters as you meant—let us dine." We did so, and he acted as if he had fasted for a week.’

I’ve often had ‘enough’ oysters but I’ve always thought I could manage a couple  more, though perhaps not another 32 dozen. 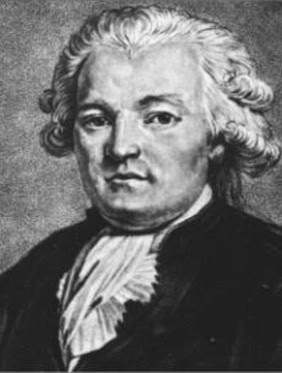 Thirty two dozen is 384 – that’s a lot of oysters, and quite an expense even at £1.50 each, let alone at Gillardeau rates. I don’t know how much money a commissary of the Directory earned in 1798, or whether he had a generous expense account, but the final bill would surely have stung.

I was also taken by that line ‘the person who opened them was not very skilful’ which reminded me of the food writer Christopher Hurst, who I used to meet one in a while though I haven’t seen him for years.  When he was writing for the Independent I think it was, he got roped in to an oyster-opening contest, at Bibendum.  It may have been for charity.  He was strictly an amateur and he found himself up against the professionals. I’m pretty sure Tom Parker Bowles was one of them – he seemed a nice lad. 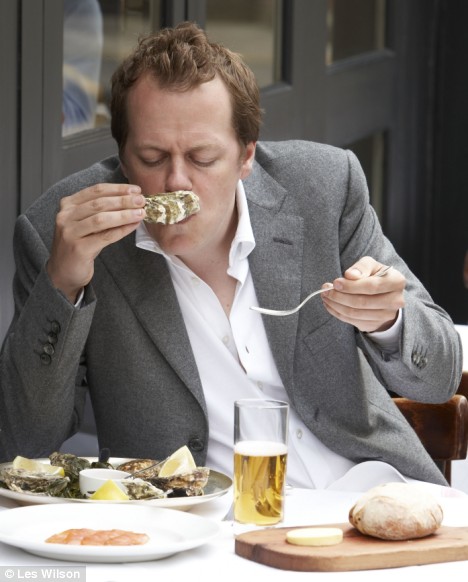 Of course the pros trounced poor Christopher, and I do remember Christopher looking ashen and humiliated afterwards, and saying the whole thing was jolly unfair. Which it was.  I imagine he’s got over it by now, though on the night it looked like something he might never get over at all. 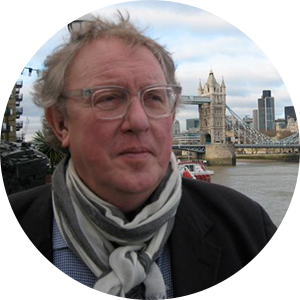 Posted by GeoffNIcholson at 9:28 AM No comments:

NO TONIC FOR THE TROOPS 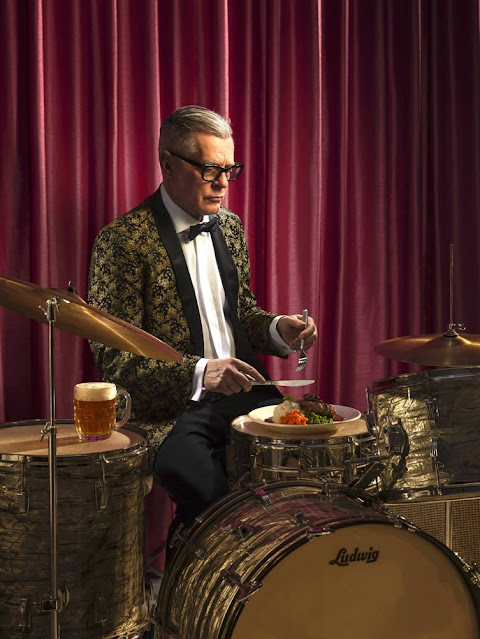 So the great Rodney Graham, conceptual artist, which in this case included being a

photographer, filmmaker, sculptor, musician and much more besides, has become the 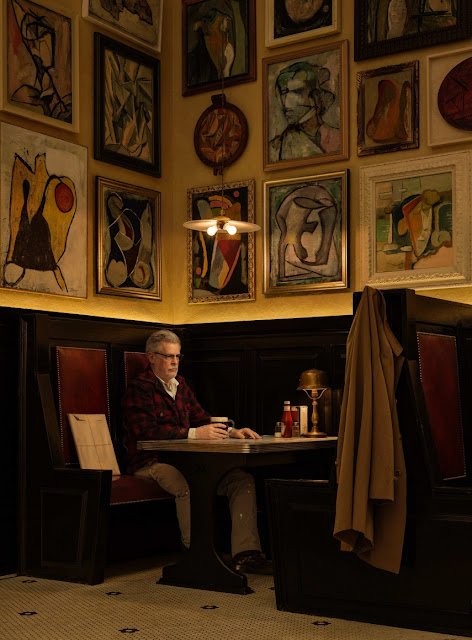 You may remember him from such art films as Lobbing Potatoes at a Gong in which he sits on a chair and throws (or lobs) potatoesat a gong some distance away.  This was apparently inspired by Nick Mason of Pink Floyd. 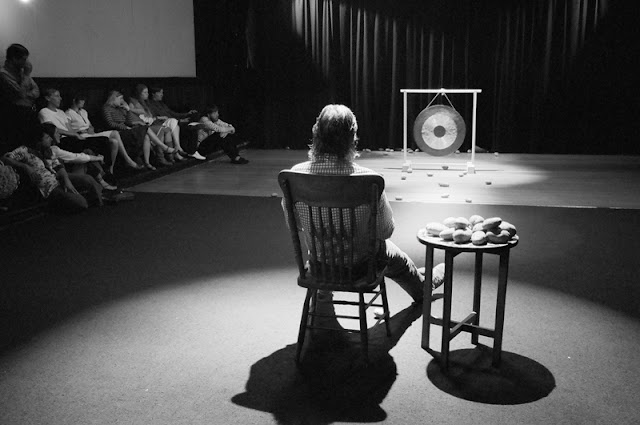 Some of the potatoes hit the gong, some inevitably missed, and the ones that hit were supposedly distilled into vodka. 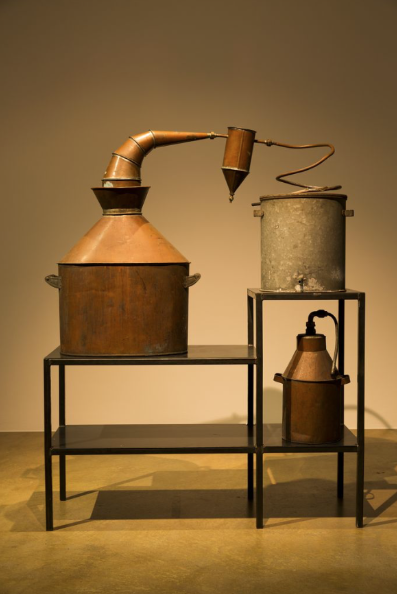 But I do wonder how, after the lobbing, anybody could look at all the potatoes on the floor and tell which had hit and which hadn’t.  Maybe there was a system. Or maybe that was the joke. 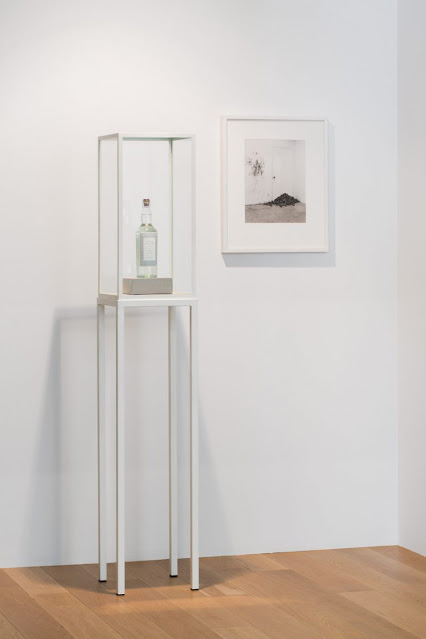 Now, some people might say that’s an awful lot of trouble to go to for a bottle of vodka. But then some people just don’t understand art.

Posted by GeoffNIcholson at 2:43 AM No comments:

And yes, since you ask, I have been doing some cooking.

(The vast majority of these pics are by Caroline Gannon)

First, a proper recipe, from Times Easy Dinners, Chicken Traybake with Balsamic Roast Potatoes.  Not much to go wrong but I'll use more balsamic when/if I do it again. 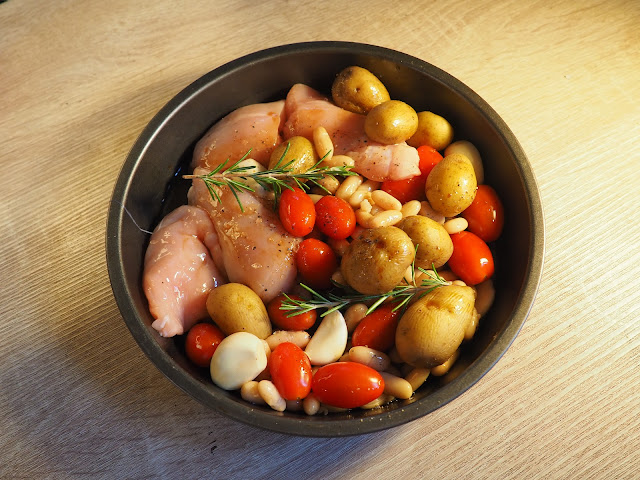 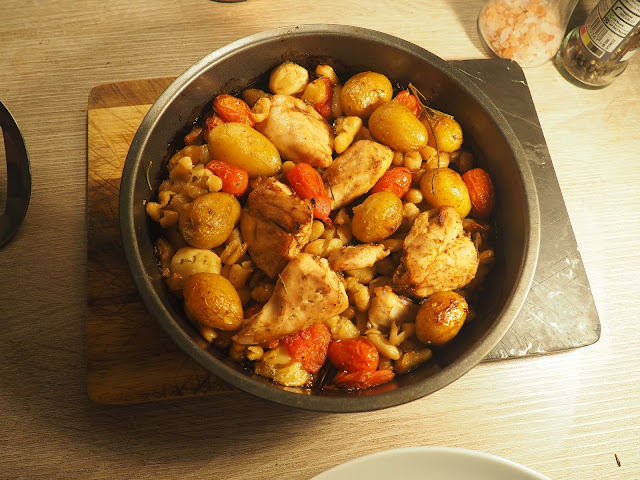 After that I busked it recipe-wise, Bream: 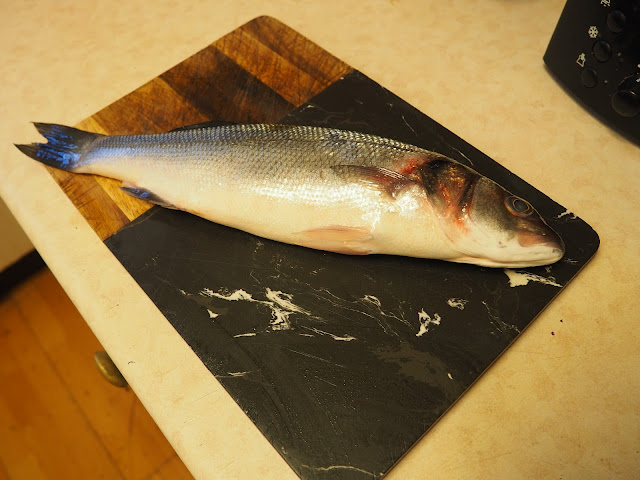 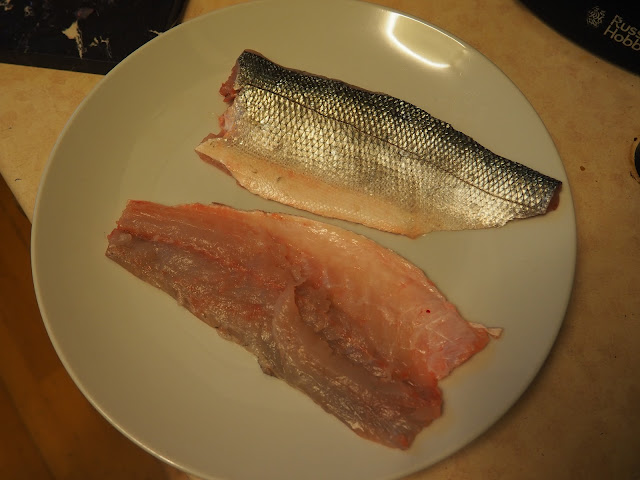 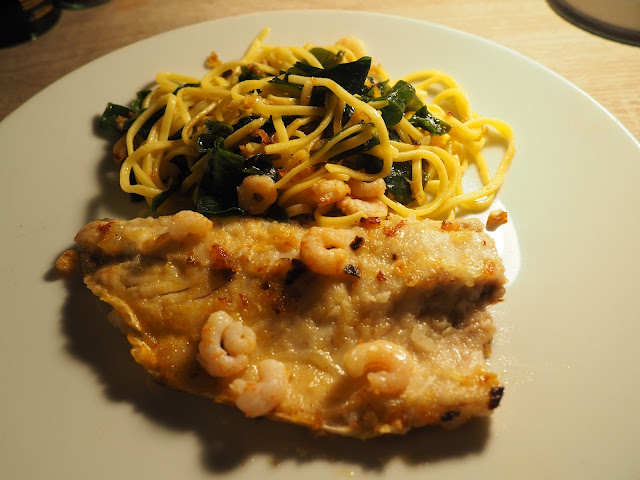 Then Rabbit - very local, shot just up the hill (though not by me): 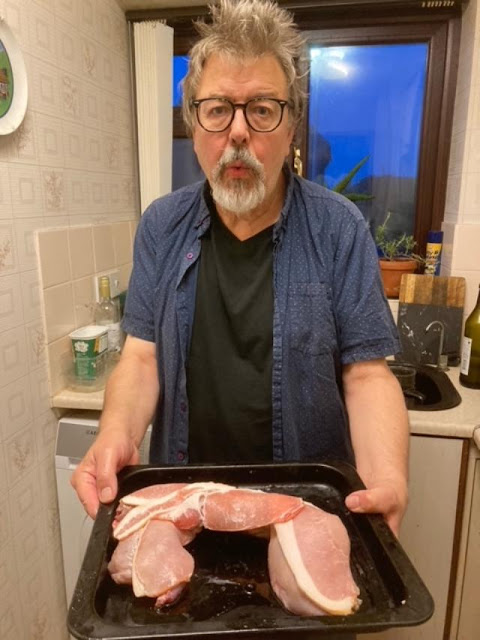 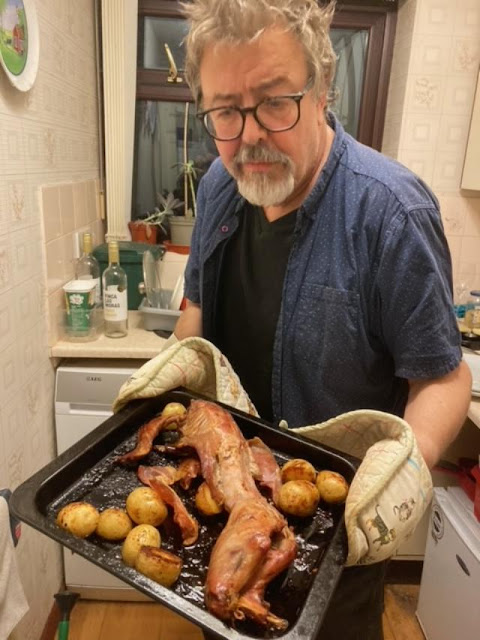 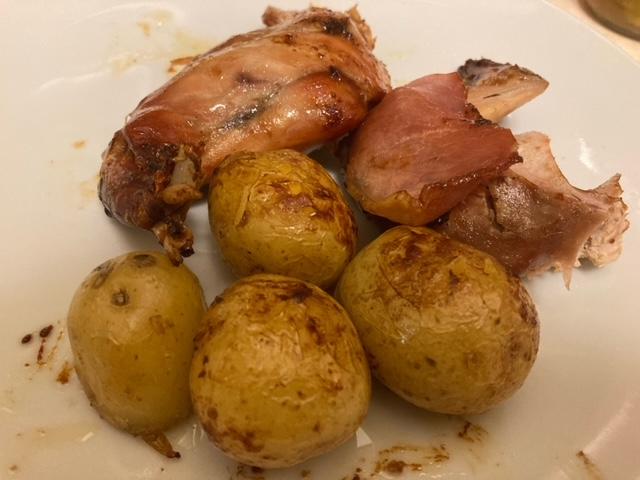 And then risotto with the leftovers: And when all else fails Steak Tartare: 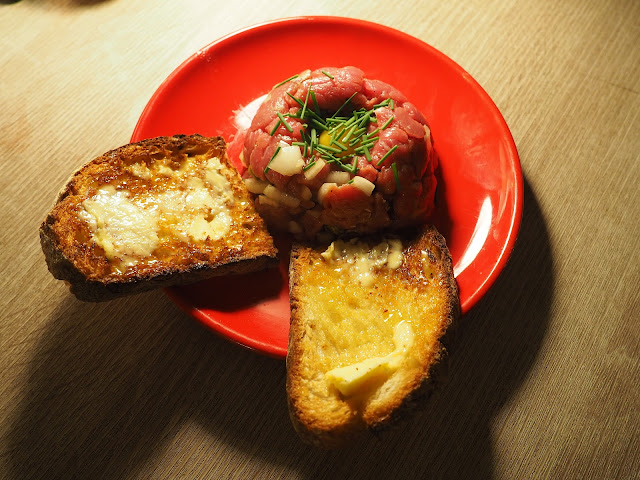 It was all perfectly decent if not totally fantastic. But you know, we can’t all be Fergus Henderson, much as we’d like to be. 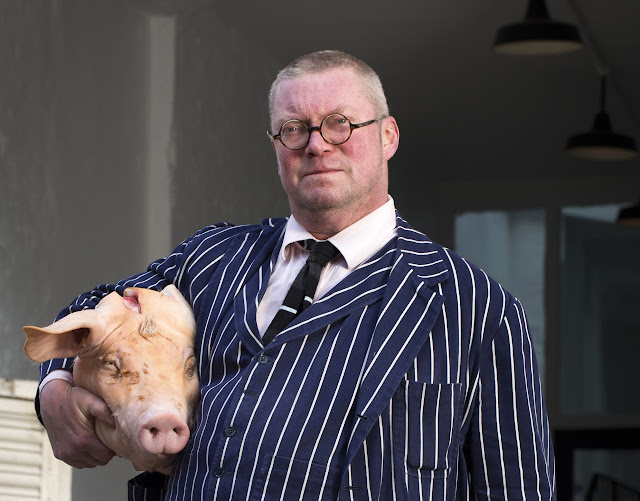 Posted by GeoffNIcholson at 7:10 AM No comments:

Heston Blumenthal is back, apparently. 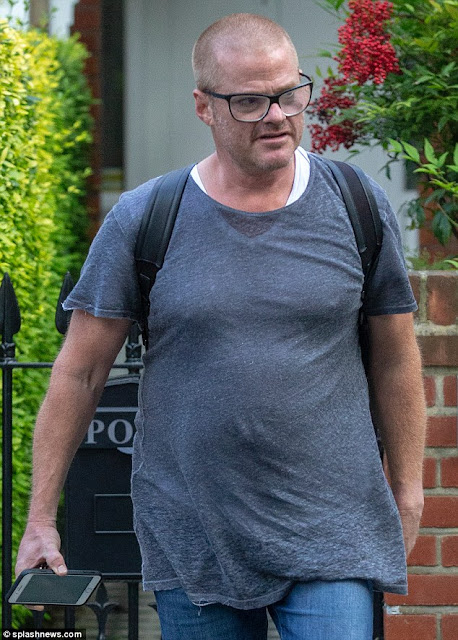 Personally I hadn’t noticed that he’d been away but it seems he has.  And in his absence he’s been working on himself and he is, as he told us repeatedly in an interview in the Times last weekend, much improved.

‘I am more energized, more imaginative.  I have more clarity in my belief, a richer more fulfilled life.’

It doesn’t end there.  He continues, ‘I can’t think of a better therapist on the planet than me because I ask questions.’

And finally he goes all Donald Trump. ‘My body heals and repairs itself at an unusually high rate. I have broken so many bones, but the rate at which they fix is unbelievable.’

And the end result of all this hard work and self-knowledge?  Heston has come up with a Prawn Cocktail Salad Sandwich.  I won't insult you by giving the recipe.  It looks like this: 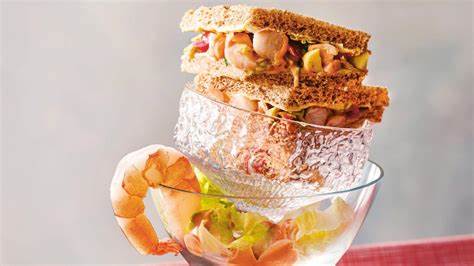 Is there no end to the man’s talent? Simple answer: yes.

Posted by GeoffNIcholson at 12:58 AM No comments:

THE EEL AND I

A year or three back, the inamorata and I went to a restaurant in London’s Chinatown, and 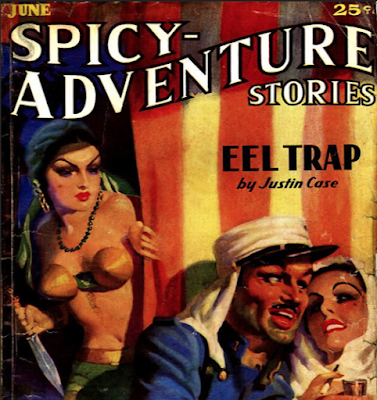 It was really good, and as the days went by we thought about it and decided it was one of the best things we’d ever eaten. So a few weeks later we decided to go back to the same restaurant and have the eel again. But either the restaurant had gone or we were looking in entirely the wrong place, or our minds had been so clouded by the joy of the eel that we’d become totally disoriented, but whatever the reason, searching then and later, we failed to find the restaurant.  At times I wondered if I’d dreamt the whole thing. 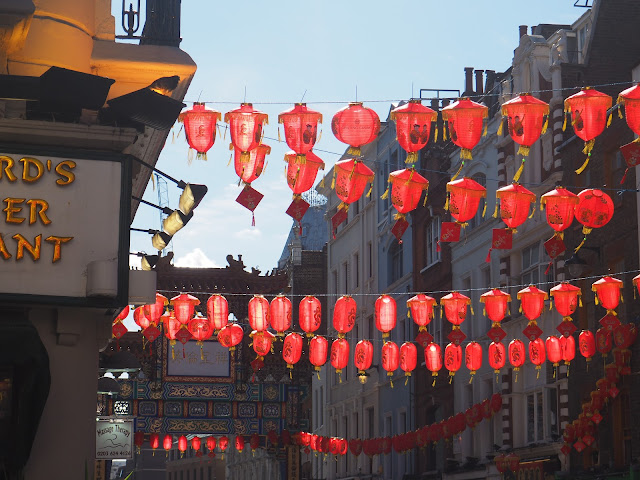 And you might say we could have looked through our bank and credit card records but we’d paid cash and we hadn’t kept a copy of the bill because we didn’t think there was any reason to - we thought we knew exactly where the the place.  We gave up on our search for the restaurant though we didn’t give up on salted eel.

On recent summer meanders through Chinatown, the whole area has looked like a tourist refugee camp, with long queues to get into many of the restaurant.  And OMG have you seen the prices?  25 quid seems about standard for half a Peking duck.  They’re having a larf aren’t they? 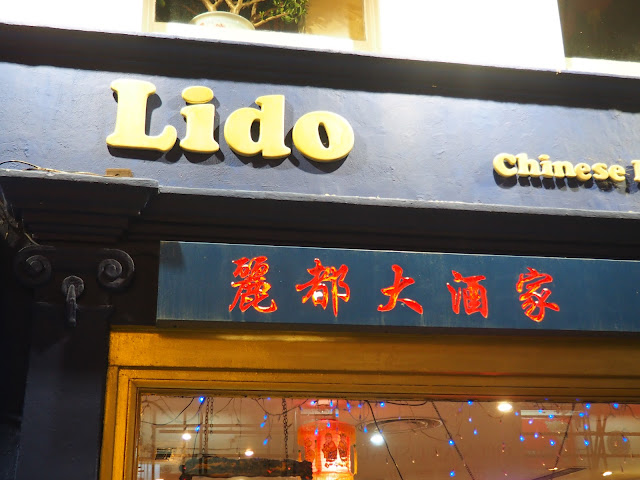 So it was that we ended up recently in a Chinatown restaurant called Lido, where there was reasonably priced salted eel on the menu, and there was also salted squid so we had that too, along with some noodles. 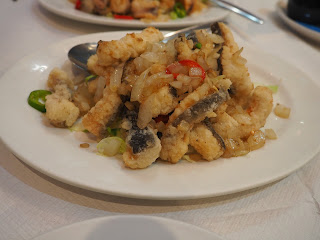 The eel and the squid, and indeed the noodles, were all very good.  Was this the salted eel of my dreams?  No, but then I suppose it couldn’t have been.  That’s how it is with dream food.

Posted by GeoffNIcholson at 11:24 PM No comments: