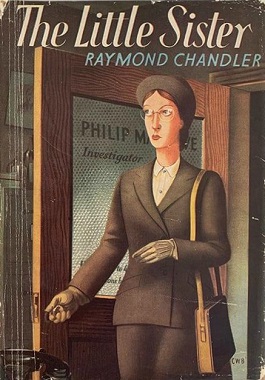 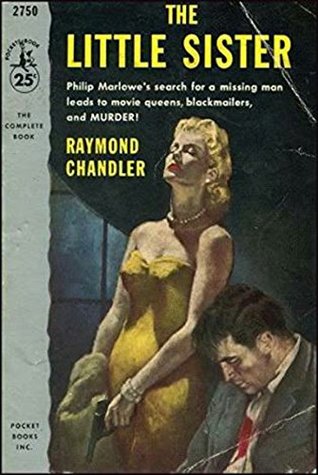 As we know, Chandler liked a drink and so did many of his characters. In The Little Sister we meet Dolores Gonzales – a faux ‘Mexican spitfire’ who at one point says to Marlowe ‘I wear black because I am beautiful and wicked – and lost’

Reader, I’d be tempted to marry her.  Of course she also turns out to be a murderess, but in Chandler we pretty much expect that.

She was played in the poorly regarded film adaptation of the book, titled Marlowe, by Rita Moreno, who was born in Puerto Rico. 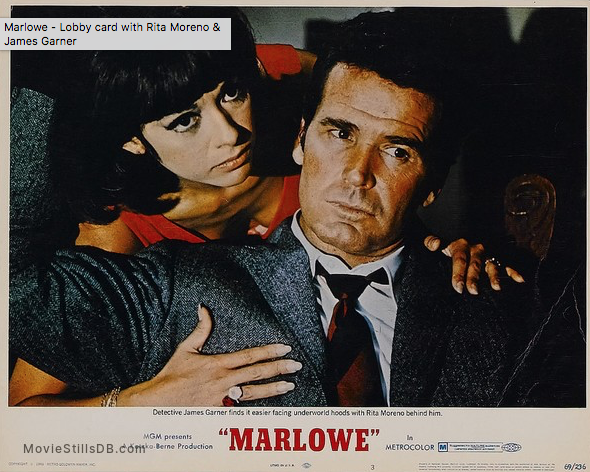 In the novel Dolores also says, ‘We will have a drink … The goddamedest drink we will have … Scotch?  Or would you prefer a mixed drink?  I mix a perfectly loathsome martini.’ 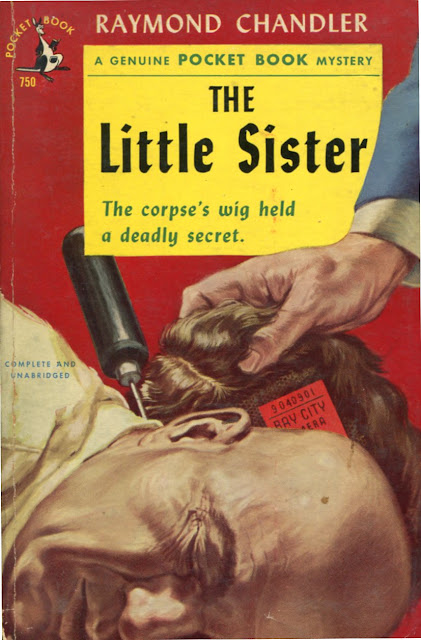 But Marlowe isn’t only about booze. He goes for something to eat

‘Down at the drug-store lunch counter I had time to inhale two cups of coffee and a melted cheese sandwich with two slivers of ersatz bacon embedded in it, like dead fish in the silt at the bottom of a drained pool.

Here’s one I made earlier – ersatz-free. 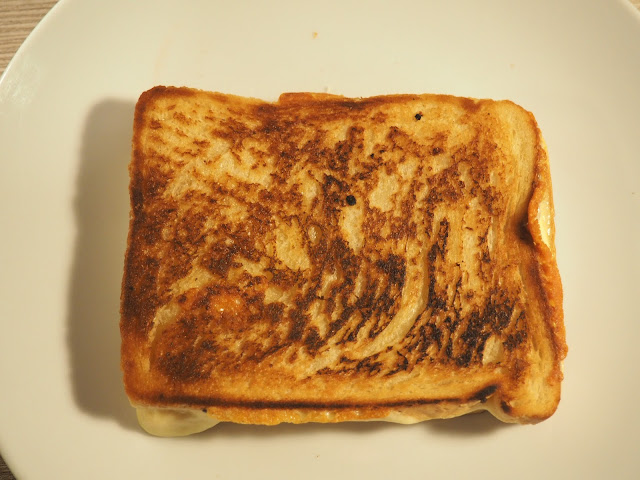 Posted by GeoffNIcholson at 4:09 AM No comments:

We went to Southend, chiefly to see Jah Wobble and the Invaders of the Heart.  Jah looked like this:

The gig was ace but you'd expect that.

Now, I don’t know what Jah (or John as I like to call him) currently likes to eat but I remembered, and have now tracked down, an old interview he did with David Honigmann the Financial Times a long time ago (2009).

It runs in part, “I had guineafowl, with cranberries and pumpkin, very acidic …” Jah Wobble is on a roll now, eyes turning upwards in ecstasy. “And it was the best meal I’ve ever eaten. It was a …religious moment!” Briefly, the memory of eating at the Chelsea Arts Club reduces him to uncharacteristic silence. “And then I spoiled it. Next day I had the same thing again, and it was good, it was still really good, but it just wasn’t perfect.” He is rueful. “I should have had the lamb.”

The man is a philosopher but we’ve always known that.

I can’t tell you whether or not guineafowl is to be had in Southend today, very probably it is, but I didn’t come across any.

On Saturday afternoon on the prom we eschewed the jellied eels, and had some cockles, whelks and octopi.  I suspect the ‘old’ Southend would have balked at the octopi. 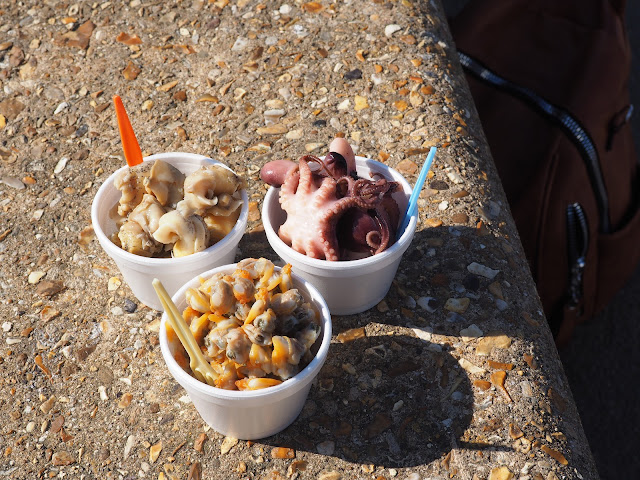 But times change.  There was even a tapas bar on the Esplanade.

But next morning, in search of authenticity, we went to a place called Café Munchies which looked like this from the outside. 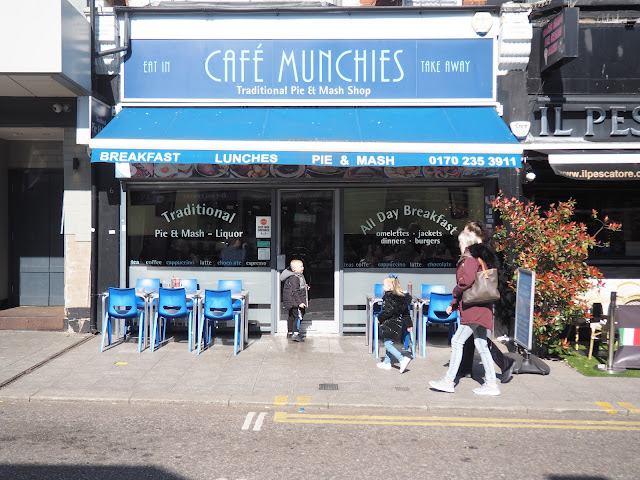 And inside there was pie and mash. We had a choice between gravy and liquor, but when you're looking for authenticity that's really no choice at all. 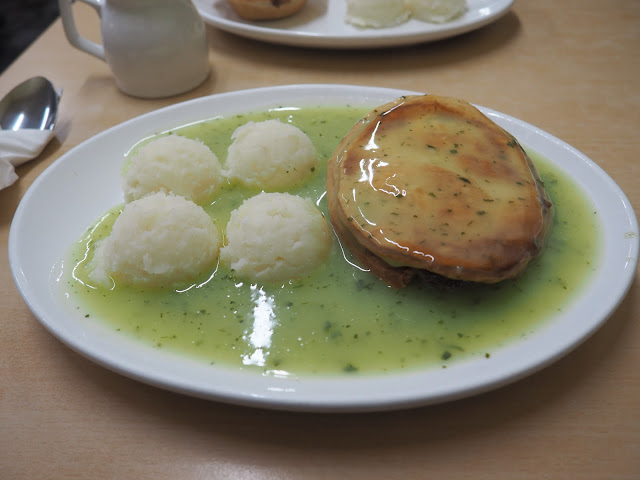 Posted by GeoffNIcholson at 1:19 PM No comments:

IS THERE NOTHING A SANDWICH CAN'T DO?

I never met anybody who thought making a sandwich was a sin,
but I don't get out much.  The other stuff, I really couldn't say. 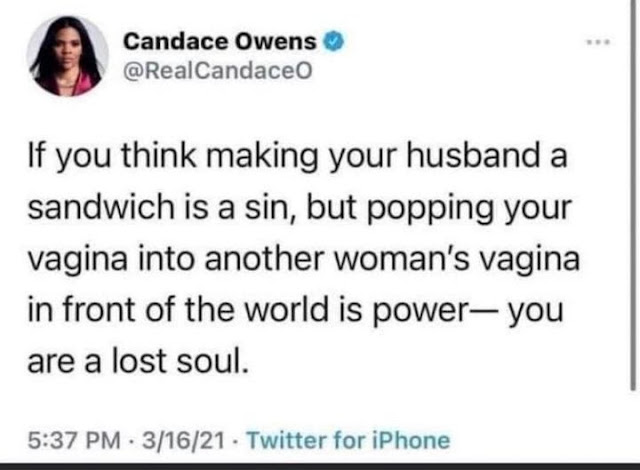 Posted by GeoffNIcholson at 12:44 AM No comments:

Email ThisBlogThis!Share to TwitterShare to FacebookShare to Pinterest
Labels: Sandwich

THE RIGHT SIDE OF HISTORY

Yes, Cadbury's Flake is on the right side of history: 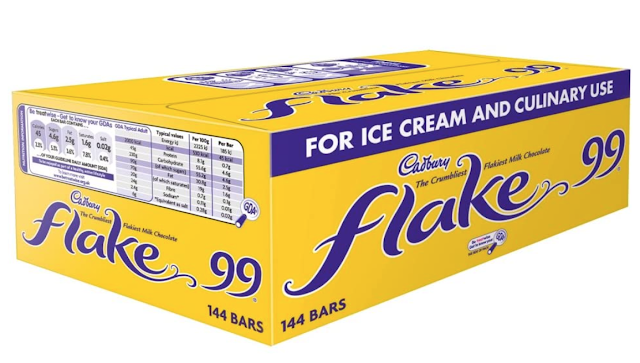 Posted by GeoffNIcholson at 11:52 AM No comments:

Email ThisBlogThis!Share to TwitterShare to FacebookShare to Pinterest
Labels: Flake, right side of history 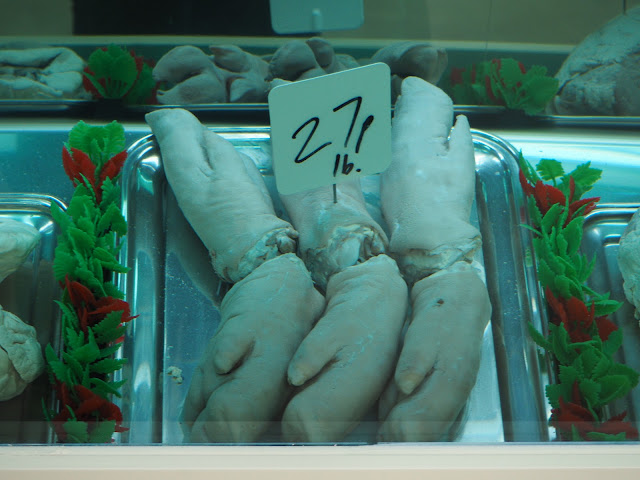 Do you eat less meat than you used to?

In fact I thought everybody was eating less meat, but apparently not.

According to a Times review by Christina Patterson’s of Rob Percival’s The Meat Paradox, the ‘average’ person in the UK ate 78.6 kgs of meat in 2013, but by 2017 it was 84.9 kg.  And apparently we’ve all been eating more meat during Covid.

Given that increasing numbers of people are supposedly vegan or vegetarian I wonder if this means that the people who do eat meat are eating more to compensate.  Or are people simply exaggerating the extent of their veganism and vegetarianism?

Incidentally Rob Percival is head of food policy at the Soil Association which not everybody thinks is the most wonderful institution; see Jonathan Meades passim - “It is difficult for instance to imagine that such titans of contemporary thought as Prince Charles and Mr Sting will be dissuaded of their support for the Soil Association because its founder, Jorion Jenks, was a member of the English Mistery and British Union of Fascists …” 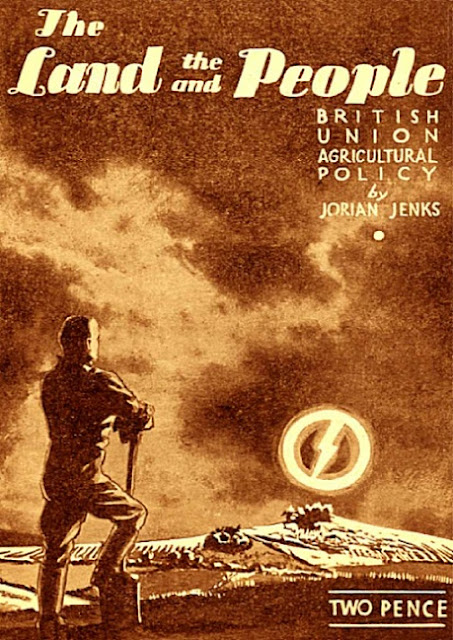 Meat was on my mind as I went to the Damien Hirst exhibition at the Gagosian Gallery in Britannia Street, London.  There on view were various meaty (and occasionally fishy) exhibits of cows, sheep, a pig, sausages, and of course a shark, some of which I’d seen before. 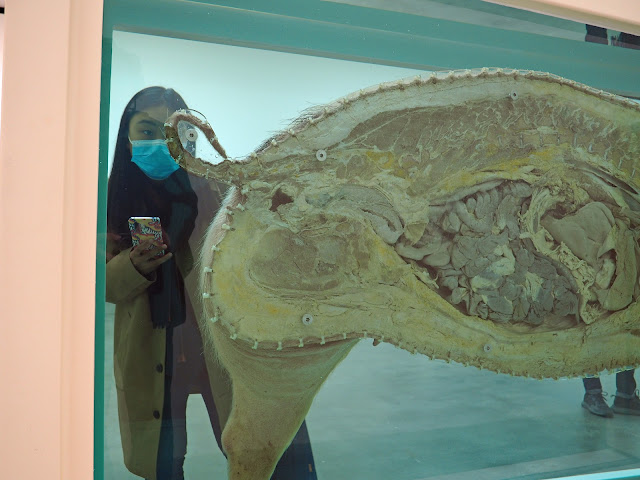 But I hadn’t previously seen a sort of replica butcher’s shop with the phrase ‘Shut Up & Eat Your Fucking Dinner’ painted in cursive script its front wall.  This is from 1997. 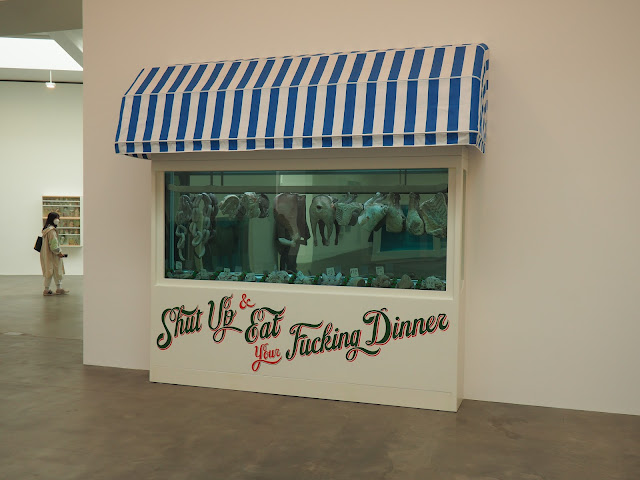 And in this faux butcher’s shop window were what looked like faux pieces of meat that might have been made out of plaster or even wax, though since the press release insists these are ‘formaldehyde sculptures’ I guess it’s actual preserved meat. 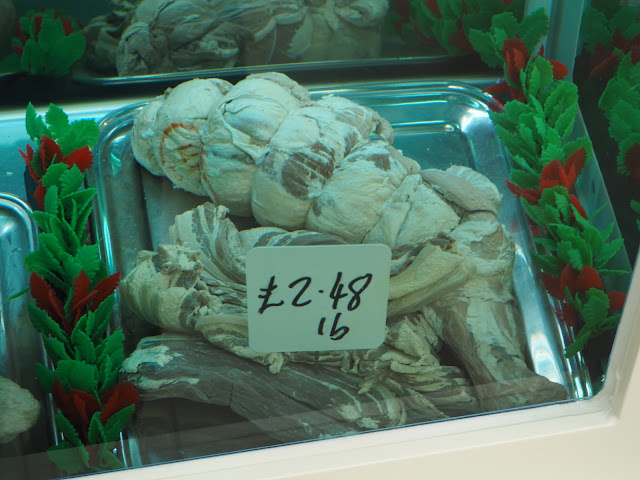 The visit to the Gagosian was in anticipation of dinner at Fergus Henderson’s St John restaurant the home of nose to tail eating, which certainly used to a be place where you might spot the occasional Young British Artist.

I always say that St John is my favorite restaurant in the whole world and sometimes, when I haven’t been there for a while, I fear that I’m over-rating the place.  And then I go there and all is well and I realize I was right all along.  It’s good to feel right.

The room isn’t the loveliest in the world and yet the ambience is terrific – and not a bad place for people watching. I’ve always found the service excellent though some Tripadvisor reviewers would beg to differ.

But of course it’s the food that counts – it was impossible to resist the old classic of marrow bones with parsley and caper salad,

And this was the special.  When you see deep fried tripe on a menu you have to order it.  It was fabulous and meaty and chewy.  Damien would have loved it, I imagine.

There were other delights too – sliced lamb with lentils, and roast Middle White.  And sure it’s a menu to scare off the vegan: pigeon, potted pork, devilled kidneys - but fish eaters are well looked after.

I also – and why oh why hadn’t I done this before – I ordered one of their martinis.  It was exactly as a martini should be, only more so.

Posted by GeoffNIcholson at 4:14 AM No comments:

It supposedly gets its name from the Tartars (Mongols) who tenderized meat by keeping it under their saddles, and then eating it raw.  This is almost certainly apocryphal, but here is Ghengis Khan – the world’s best known Mongol. 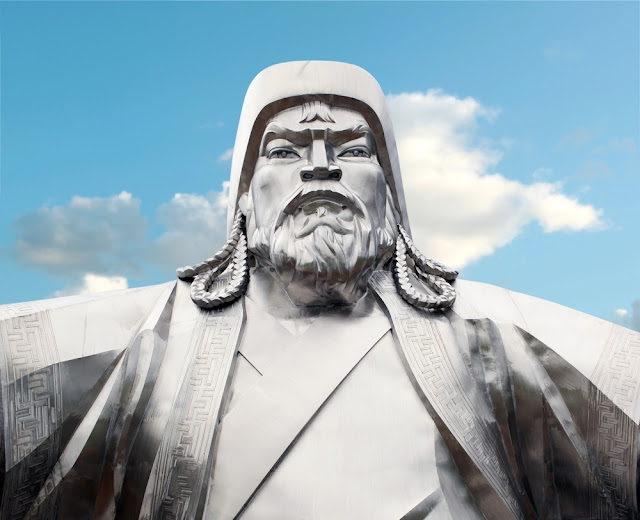 A friend of mine, American, worldly, a very good French speaker, used to tell the story of her first time in Paris when she went into a somewhat fancy restaurant and saw steak tartare on the menu.  So she ordered it and asked for it well done.  French hilarity ensued.

I don’t disbelieve her but according to Alan Davidson inThe Oxford Companion to Food, the French term for steak tartare is steak à l'Americaine, which spoils the story, and I’d no more argue with Alan Davidson than with Ghengis Khan. 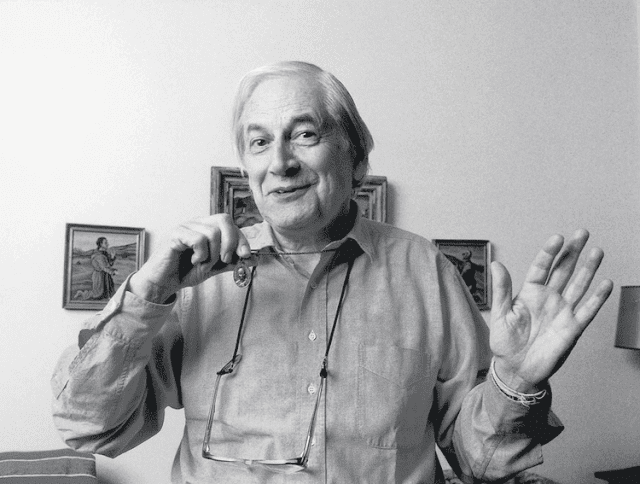 Anyway I’d been thinking a lot about steak tartare. I wasn’t craving it exactly, but I was feeling I’d like to have one if the opportunity presented itself, and it did a couple of weekends ago when I found it on the menu of the Bear in Rodborough, Gloucestershire.   Naturally I ordered it.  It looked like this:

It wasn’t a standard issue tartare, and actually you know I’m not sure there is an absolutely standard recipe.  Everybody seems to have their own version.  Beef, gherkins, lemon juice, capers, onion, Dijon mustard, Worcester sauce, and a raw egg are pretty much always involved, but some include horseradish and Nigel Slater even favours anchovies but then he’s a maverick.  The menu description at the Bear read ‘Native dry-aged beef tartare, shaved black truffle, Tunworth soft cheese, sorrel oil, beef dripping toast.’ There was no mention of raw egg for example, for which I was on balance grateful. I mean I’ll eat it if it’s there, but if it’s not there I don’t feel deprived.  It came looking like this (it tasted better than it looked):

Under the garnish, there was a reddish goo, which I suppose must have contained the cheese since I couldn’t detect it in the beef.  Could there have been ketchup in there too?  And possibly an egg yolk?  As for sorrel oil I never knew there was such a thing but I suppose it would be tart and zingy and much like oil and lemon juice, which was fine by me.  The whole thing was pretty good, though I could have done with a bit less salt.

When I got home, having the bit between my teeth, as it were, I decided, a few days later, to make my own steak tartare. Perhaps surprisingly even to me I’d never done this before.  I mean it ain’t rocket science.

Being pathologically incapable of following a detailed recipe I consulted multiple sources; the likes of Nigella, Gordon and Martha: the usual suspects. My perfectly ordinary version was much as described above steak, gherkins, lemon juice, capers, onion, Dijon mustard, Worcester sauce, salt and pepper.  No egg.

The result was pretty damn good if I say so myself. In retrospect I think I could have added a bit more of each of those seasonings, but I didn’t want to go too crazy on my first time.  The Platonic ideal of the steak tartare remains elusive but time is on my side.

Posted by GeoffNIcholson at 9:24 AM No comments:

I was in Janes Pantry in Gloucester: no need for an apostrophe. 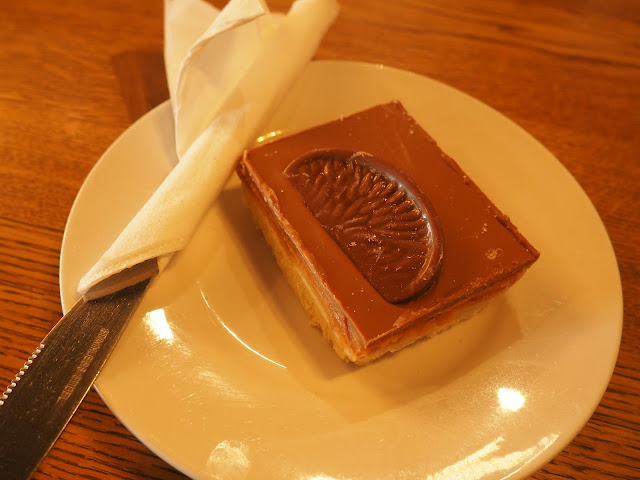 I had the Billionaire’s Shortbread – it’s the segment of chocolate orange welded to the top that adds the zeroes.

You know I absolutely used to ADORE Terry’s Chocolate Oranges.  I’m still drawn to them whenever I see them but somehow they never quite live up to expectations.

Having ordered the shortbread at the counter I sat down at a table and got a look at a proper printed, laminated menu. In many ways it was standard issue apart from one item I’d never seen before anywhere ‘Synthetic Iced Buns.’ 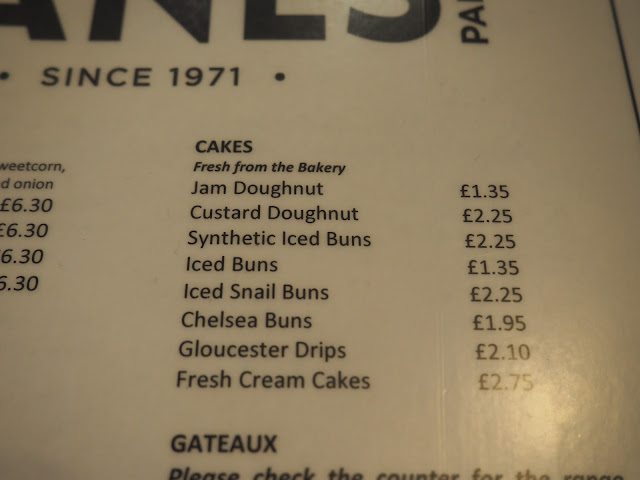 I’m guessing it’s a vegan thing but I’m not sure, so I went online to try to find out more about synthetic iced buns and all I came up came up with this: “Instant Glitz Synthetic Hair Bun Sweet Rolls Classic Glazed (S)” 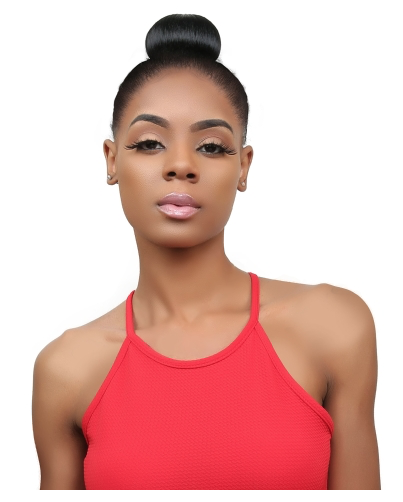 I think this is a joke, but I’m not sure at whose expense.

Want to show your support for Ukraine without really doing anything (i.e. pretty much like everybody else on the internet)?  You could always eat some Ukrainian Buttercream (not synthetic).

Posted by GeoffNIcholson at 3:36 AM No comments: