My review of Medium Raw, as it appeared in the San Francisco Chronicle. 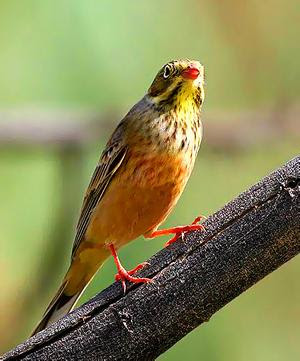 In the interests of full disclosure I should say that, about a decade ago, Anthony Bourdain gave one of my novels a snippy review. He described it as “always clever, seldom fun.” The wound has healed, but as you see, I still remember the line, because let’s face it, it’s a damn good one. Today I can also console myself with that knowledge that by Bourdain’s standards, I got off very lightly.

His new book Medium Raw, is subtitled “a bloody valentine to the world of food and the people who cook,” and much of it reads more like a poison pen letter than a love note. Sandra Lee is the “hellspawn of Betty Crocker and Charles Manson.” The movie No Reservations makes him want to “vomit blood.” Rocco DiSpirito’s TV series is a “reality-show driven abomination.” (p106) Alan Richman starts out as a douchebag, but then Bourdain upgrades him to the c-word. Even the saintly Alice Waters is dissed for her “crude and obvious blend of self-aggrandizement and genuine good intentions.” 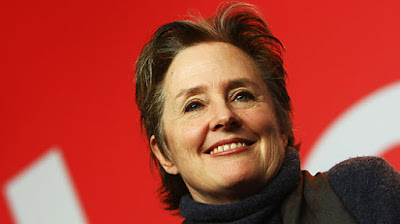 Elsewhere, Gael Greene, Alain Ducasse, Wolfgang Puck, and many more, come in for varying degrees of evisceration. This, of course, is all great fun, even if some of it’s the shooting fish in a barrel variety. But just in case you’re wondering whether Bourdain can take it as well as he can dish it out, he turns his verbal knife skills on himself. “A loud, egotistical, one-note asshole who’s been cruising on the reputation of one obnoxious, over-testosteroned book for way too long,” “the angry, cynical, snarky guy who says mean things on Top Chef”, “the very picture of the jaded, overpriviledged ‘foodie’.” Well, he makes some good points.

He also approves of many people too: Thomas Keller, Ferran Adria, Jamie Oliver and Jonathan Gold among them; but it’s probably inevitable that the compliments tend to be rather less memorable than the blazing though finely-honed putdowns. 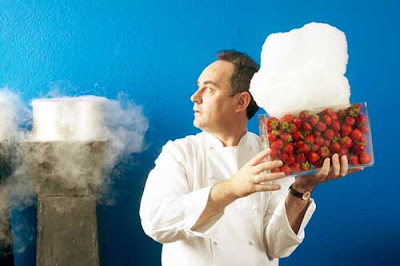 But actually, Bourdain’s at his best when he isn’t playing the part of gastronomic insult comic. He writes, “I like making things. And I like telling stories,” and this shouldn’t come as news. His breakthrough book Kitchen Confidential wasn’t a success only because of its revelations about bad behavior on the countertops. It was an engaging and skillful narrative that beckoned and seduced you into the world of the professional chef.

Medium Raw is being marketed as a “follow-up” to that first book, though to me it reads more like a collection of magazine articles and opinion pieces. So we have lip-smacking descriptions of eating pastrami at a deli on Houston Street in New York, waiting for the first batch of pain raisin at a bakery in Paris, consuming freshly made blood sausage in a village outside Prague. These are fine as far as they go, but the book is better when Bourdain goes further.

The prologue describing an illegal ortolan feast involving some of America’s greatest chefs could be the first chapter in a suspense novel. Who are these people (Bourdain doesn’t name names), why exactly do they wear “shrouds” while eating, and what kind of man enjoys the taste of “figs, Armagnac, dark flesh slightly infused with the salty taste of my own blood”? 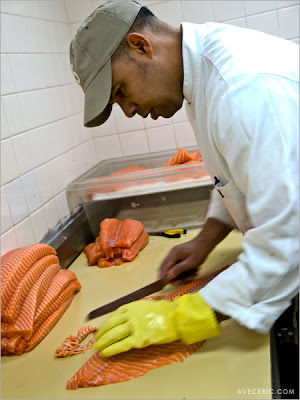 But for my money the stand out chapter in the book is “My Aim is True” which describes the work and life of Justo Thomas, who cuts and portions at least seven hundred pounds of fish every day at Le Bernardin, the New York seafood restaurant. The man is a brilliant craftsman and a force of nature, and when he goes on vacation, three people have to be employed to do his work. Bourdain observes and describes Thomas in wonderfully fine detail. We “see” the way he employs different methods for different fish, how he uses his knives, the way he removes skin and bones, how he’s able to cut absolutely identically sized pieces. Then we learn about his background in the Dominican Republic, and the role he still plays in his family there. And finally, in a masterful flourish, Bourdain takes Thomas to eat at Le Bernardin. It’s generally unthinkable for kitchen staff to eat in their own restaurant, but for Justo people make exceptions. By the end of the piece I felt I knew Justo Thomas better than I know most of my own friends. You have to hand it to Bourdain; this is really good writing, not just really good food writing.

Bourdain says he spent twenty-eight years as a professional cook and chef. By my reckoning he’s spent fifteen years as a professional writer. Will it surprise you that he doesn’t think much of writers? He says, “hanging out with more than one of them at a time is about as much fun as being thrown in a cage full of hungry but toothless civet cats.” (p48) Just once in a while, even Mr. B overcooks his similes.
Posted by GeoffNIcholson at 9:47 AM No comments: 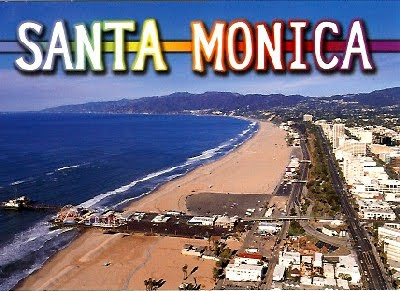 An old friend from England was in town; author, anthropologist and all round style tribe guru Ted Polhemus. He was here to lecture on the semiotics of denim (don’t ask).

When I say “in town,” he was actually in Santa Monica, a place I don’t know all that well, and so when we set off to find somewhere for lunch, for one reason or another we ended up on Santa Monica pier at theme restaurant called Bubba Gump’s. It’s a chain, and maybe you’ve heard of it, but I hadn’t. It was evidently inspired by the movie Forrest Gump, and although I’ve seen the movie, it was a long time ago, and I’d more or less forgotten about the shrimp boat part.

Of course the food snob in me hesitated at the prospect of a heaving, theme restaurant, a tourist place, full of large family groups with howling children and a lot of dropped shrimp on the floor. But you know, food snobbery is unattractive in anybody, and especially in a food blogger. So I decided to go with it. 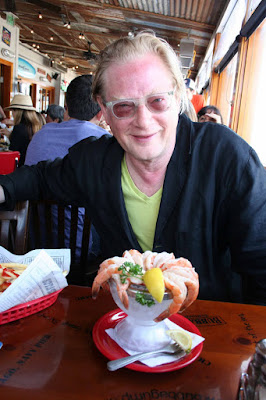 And you know, really, the food wasn’t bad. Ted (see above) had the Shrimper's Net Catch “Our best Peel'n'Eat Shrimp steamed in Beer - You and your crew will be begging for more!" I had the Dixie Fishwich “Forrest and Lt. Dan had one everyday!”

And the ambiance? Well yes, it was loud and hectic, but if you got the right table, which we did, i.e. one by the window, you can see all the way north along the coast of Santa Monica Bay, with the mountains in the background, so you get a million dollar view to go with your ten dollar fish sandwich. That’s really not such a bad deal.

The waiting staff was efficient and efficient, and seemed supernaturally happy, which can’t be easy. But the best feature of all was a thing on the table that looked like a car’s license plate. When you sit down it’s in this position, 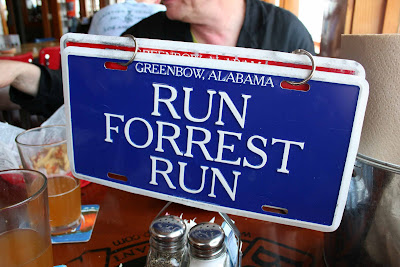 That means you don’t need anything from the waiting staff and they can run right by you. But then other times you can flip the plate up and reveal this one underneath. 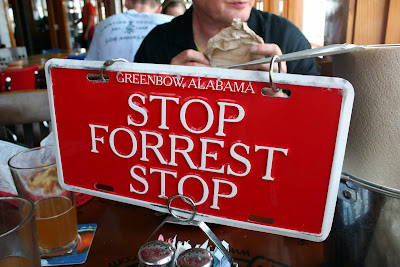 This means that any waiter who happens to be passing – not just yours – will stop and ask what you need. “Another Hefenweizen, please.”

I think this is the most wonderful dining innovation: no more trying to catch the eye of some distracted waiter. The sign, the signifier if you will, is right there on the table. Of course, given some of the restaurants I’ve been in, a license plate might be too subtle. How about a light, like on the roof of a taxi, and maybe it should be flashing, or the could be flag you could raise, or a small distress flair you could launch, that could return to earth by parachute, with the message, “Actually, make that two Hefenweizens.” 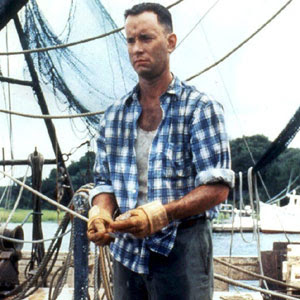 Posted by GeoffNIcholson at 10:47 AM 2 comments: 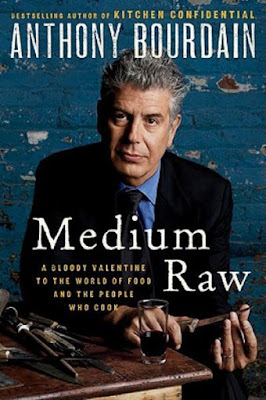 I’ve been reading Anthony Bourdain’s new book “Medium Raw” to review it for the San Francisco Chronicle. It’s a lot of fun, and especially if you have negative feelings about Alain Ducasse, Rocco DiSpirito and Wolfgang Puck, among many others. They all get a lashing from Mr B.

Among the many provocative statements in the book is this one: “The care and feeding of the Fourth Estate – and their bastard offspring, food bloggers – has become an important skill set for any chef looking to hit the Big Time ... ‘turning’ a journo is usually a pretty simple matter. Just feed them for free. You’ll never have to remind them about it later. Believe me. They’ll remember. It’s like giving a bent cop a Christmas turkey.”

Now, I'm an odd kind of journalist, an especially odd kind of food journalist, though I think my bastardly blogging credentials are real enough. Even so, nobody has ever tried to ‘turn’ me. The nearest I came was having a chat (rather than an interview) with Fergus Henderson, when I was writing about his restaurant St John for Bon Appetit magazine. (The piece got spiked, but I got paid – a triumph). Fergus insisted that he never gave free meals to journalists, and I certainly wasn’t asking for one, but he did give me a glass of Poire William liqueur to go with my espresso. 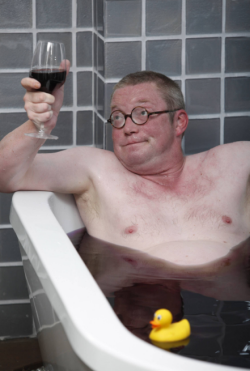 For what it’s worth, St John is my favorite restaurant in the world, and I think I can look into my heart and safely say that it wasn’t a single glass of Poire William that made me feel that way. It takes more than a single shot of liqueur to corrupt me. How much more, I don’t know. Perhaps somebody would like to try a few experiments.