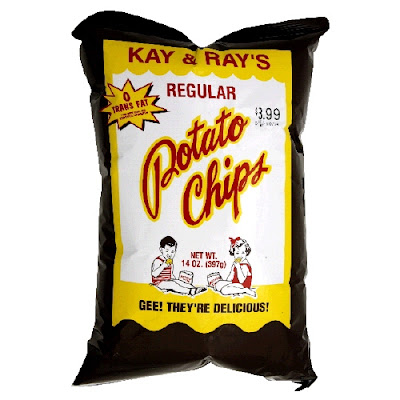 So, what’s been on your mind lately, Geoff?  Well, I’m glad you asked.  Quite a few things, actually.  First I got a comment on an earlier post about Kay and Ray’s potato chips.  The original post is here:

http://psycho-gourmet.blogspot.com/search?q=potato
and you’ll see the comment runs:  “Kay and Ray are my cousins, my Aunt and Uncle Charlie and Ruth Heckendorn had this business for a while. Just this past weekend, the news broke that they may be going away!!! Apparently they were made by Martins/Gibbles and Gibbles went out of business. SOMEBODY needs to make these chips!!!!!!!!!!!!!!”

Well this is sad news indeed.  Kay and Ray’s were fabulous.  The article in Lucky Peach magazine that alerted me to them said the business had passed from family to family for generations, and the name Kay and Ray’s dated to the mid 50s.  The next part of the story, as far as I can piece it together, is that the Heckendorns, sold the business to Gerald Lehman in 1976. Lehman sold it to Donald Carr in 1987. Carr sold it to Martin’s Famous Pastry Shoppe Inc. in 1996, and in December 2012 Martin’s sold the line to Gibbles, owned by Dieffenbach Foods who just announced that they’re closing down the Gibbles snack food line altogether, including Kay and Ray’s, as well as some other favorites I’d never heard of, including Gibble’s Puffys, and the “legendary” Gibbles Red Hot Potato Chips.  Dieffenbach’s say they’ve discontinued these brands to concentrate on other potato chip lines; i.e.  Dieffenbach’s. 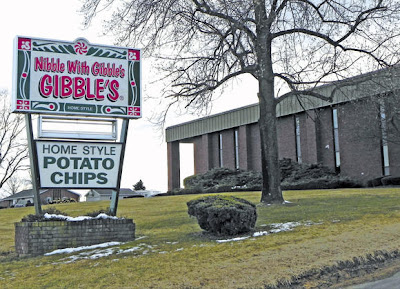 So the Loved One and I tried a little desperately to obtain some Kay and Ray’s, or even some Gibbles, going as far as calling the factory, where we spoke to a rather tearful woman, who said the distributor’s truck was on its way to collect the last of the chips, so they couldn’t sell us any.  It appears that people are selling Kay and Ray’s and Gibbles at a premium on eBay, and we were slightly tempted, but we just didn’t want to get involved with potato chip scalping.

The unique selling point of Kay and Ray’s potato chips was that they were fried in lard; and if you don’t find that intriguing and a Good Thing, then I suspect there’s no hope for you.  Anyway we have swept into action (if you can call ordering things on line action) and ordered some other lard fried potato chips – all from Pennsylvania – some Good’s and some Zerbe’s lard fried potato chips are on their way. 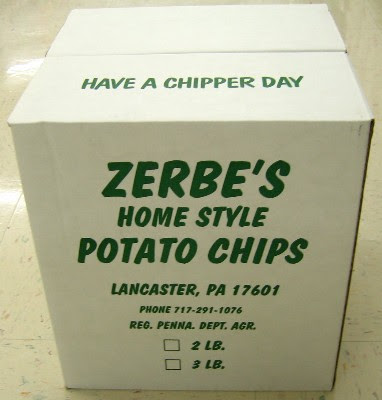 Actually certain companies are a bit shy about their use of lard, some use the word “shortening” or they call them home style: this includes Deiffenbach’s (who may or may not be the great Satan in all this).  Most of their chips are cooked in vegetable oil, but they make some called “Old Fashion” which are indeed fried in lard.  For the hell of it we ordered some of them too.  Expect a major tasting in the near future. 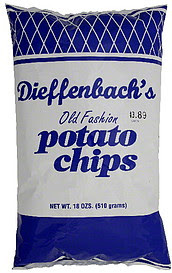 Meanwhile the March issue of Los Angeles magazine had an article written by David Hochman (not some literary foodie prank as far as I can tell, though I hope it was) about Totoraku, a “secret beef restaurant” run by one Kaz Oyama, on Pico Boulevard in LA.  The restaurant has no sign outside, or rather it has the sign of a different restaurant (The Teriyaki House Pico), and attempts to get a table there result in multiple humiliations.

Hochman, having used his contacts and spent a couple of weeks leaving messages at a secret number, gets a call from Oyama:
“Do I know you?” he asks when I say hello. I say no. “Oh, then I cannot let you come. But maybe you can find someone who knows me.”
Hochman adds, “The only way to eat at Totoraku is to call the handwritten cell number on Oyama’s flimsy business card. But the only way to get Oyama’s card is to eat at Totoraku.”
Ah me. Will it surprise you that the foodies and A-listers of LA absolutely salivate at the prospect of this Zen annoyance?  Benicio del Tor is a regular apparently.  The place is unlicensed but if by any chance you get to eat there you’re expected to turn up with a bottle of very good wine.  Hochman says Whoopi Goldberg brought a "vintage magnum" of Chateau Margaux, though my understanding is that there's no such thing as non-vintage Chateau Margaux: the thing we want to know is what year .
The food is apparently wonderful, but I know that if by some miracle I got to eat there I’d be so blazing with resentment that I wouldn’t enjoy it.  On the other hand I do sort of understand Oyama’s point – as a restaurant owner I can see why you might prefer to choose your customers. rather than have your customers choose you; which is obviously why I will never be a customer there.  Stay with me - I’m going somewhere with this.

OK, then I read an article in Vanity Fair by Corby Gummer, complaining about the tyranny of celebrity chefs in general, and the tyranny of the tasting menu in particular.   No protest from me.  I’ve never been a fan of the tasting menu, and have avoided them where possible.  On the few occasions I’ve had them I come away feeling like I haven’t quite had a meal.  And there was a hideous occasion at a well know restaurant in New York where I ate two consecutive courses of thin, bland, dreary soups. 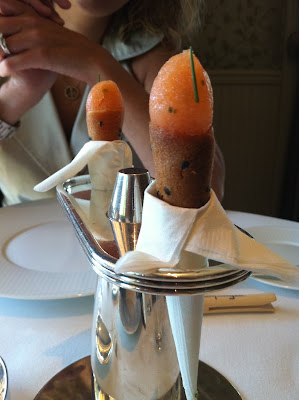 I guess I hadn’t realized just how absurd things had got.  According to Gummer, El Bulli used to have 50 courses, and the French Laundry still does 40 plus, though I see their website currently offers just nine, with a few options, such as a choice between asparagus on the one hand, or pea porridge with black truffles on the other, although since the latter comes with a $100 supplement in addition to the basic price of $270 you might think that’s not all that much of a choice. 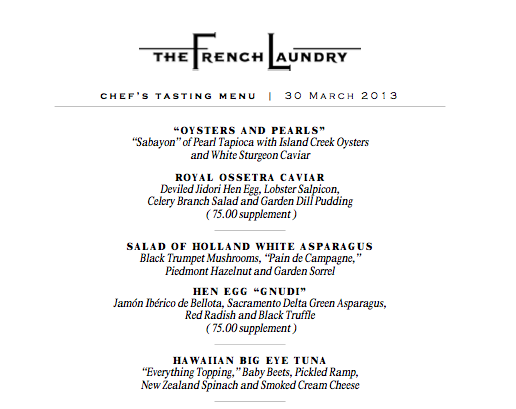 It always seems to me that the real, and obvious, problem with a tasting menu is that somewhere along the line you’re bound to find something you don’t like much.  Why not, you know, order three things you’re sure you’re going to like?

Worse still, I can never escape the feeling that tasting menus are done for the restaurant’s convenience, not mine.  When the customer has no choice, the kitchen knows exactly what they’re going to serve, and since these fancy restaurants are so always full, they know exactly how many covers they’re going to serve. Makes life easy.   I was going to say no fuss no muss, but I guess that’s not right.  No muss, despite a great deal of fuss. 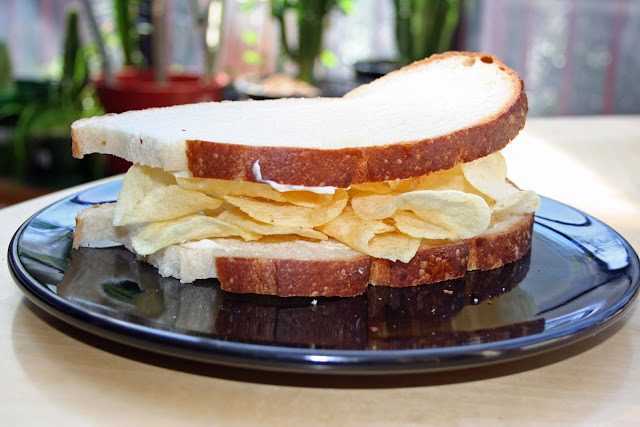 And so I fantasized that I might develop my own secret restaurant.  Obviously there’d be a rigorous vetting process of potential diners; perhaps based on literary tastes and choice of footwear.  But if you were you’re lucky enough to snag a reservation at Chez Nicholson you’d be given the no choice tasting menu, which would consist of preciely one dish, the lard-fried potato chip sandwich.  Don’t like it?   Go and eat at Totoraku.  Oh that’s right, you can’t can you?
Posted by GeoffNIcholson at 8:30 AM 4 comments:

QUAFFING WITH KEEF (BY PROXY) 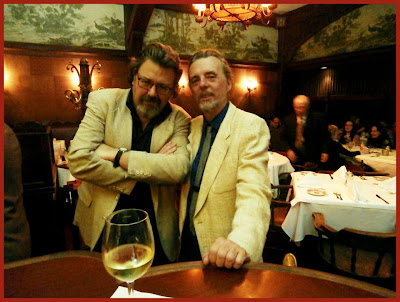 Last Thursday I helped a man lose his virginity twice in one night.  The man was J. Michael Walker, all round top artist, and the two losses came more or less simultaneously.  That's him on the right, above.  He had never been to Musso and Frank, and he’d never drunk a martini:  a sheltered life indeed for an Angelino. 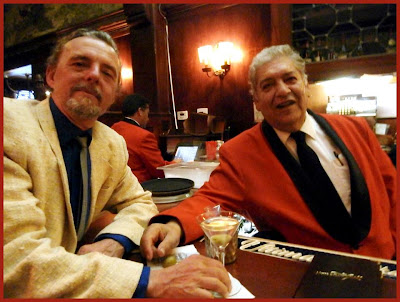 Anyway this was all quite easily corrected thanks to my favorite barman Ruben Rueda (again, above, on the right).  The best thing about the Musso martini is that you get a full martini glass accompanied by a miniature glass flask containing pretty much the same again; so it’s essentially two for one. 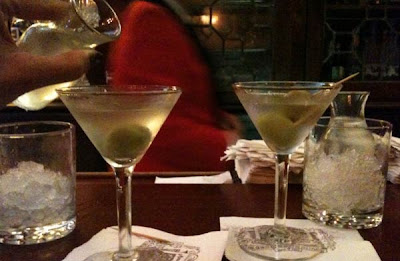 Ruben is clearly a large man but he wears it well thanks to the generously tailored Musso jackets, and of course having been there a long time  - well over 40 years - he’s met many of the great and the good, as well as the not so great and the positively bad.   These include Keith Richards (and you can argue among yourselves about which category he fits into).  I found this little gem on the Musso website. 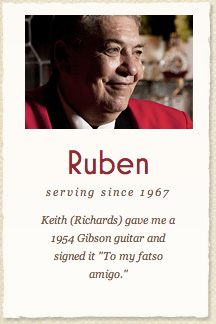 Hey Keith, no need to be hurtful, is there?

Posted by GeoffNIcholson at 12:04 PM No comments: 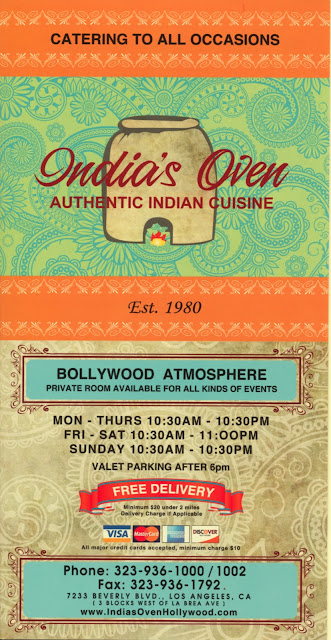 Here in the Psychogourmet Mansion we love a good menu.  We love a bad menu too, and sometimes it’s not so easy to tell the difference.  The other day the above menu got put into the letter box here, from a restaurant called India’s Oven, which is in fact some miles away, so delivery charges would definitely apply, but of course I was taken by the notion of a restaurant with Bollywood Atmosphere, or is that just in the private room?

I never like to mock people’s use of the English language on menus.  Which of us could go to Dehli and write a menu that the locals wouldn’t find completely absurd?  But on India’s Oven menu there are things wonderful as well as absurd, here in the naan section. 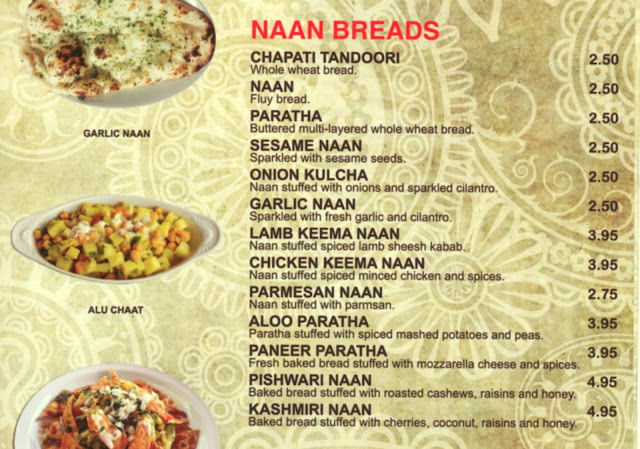 I’m guessing that most people may be a little bit suspicious of “Fluy bread” – as they would be with, say, Sinusy spinach. But who could resist the garlic naan “sparkled with fresh garlic and cilantro” and onion kulcha “naan stuffed with onions and sparkled cilantro.”  You know, I think from now on I want ALL my food to be sparkled.

I notice incidentally that the online menu doesn’t offer these sparkling choices, which is a shame. 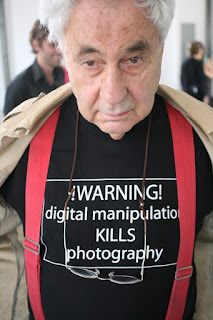 And here’s another small equine thing.  Elliott Erwitt, the great photographer, that's him above, American, though a Russian born in Paris, found himself aged 16, living in a house on Fountain Avenue, in Los Angeles.  He took over the lease after his father left town, and took in boarders at $6 a week.  This would be sometime in the 1940s.

One of the guys who lived there was Eugene Ostroff, who eventually became the curator of photography at the Smithsonian Institution.  He said in an interview, "Those were times when we were down to one meal a day. We knew somebody who owned a pet shop and he sold horsemeat. When we were able to get enough money together we'd buy some horse fillets, get a few bottles of wine and have a banquet." 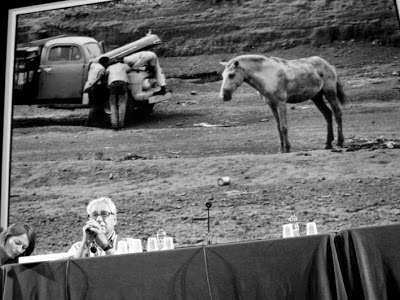 I do hope that there’s currently some emancipated 16 year old out there, living independently, with the lease on a house, and with access to horsemeat and wine, but you know, somehow I doubt it.
Posted by GeoffNIcholson at 9:38 AM No comments: