TOUGH GUYS DON’T EAT SANDWICHES. OR DO THEY?

I was doing one of my periodic rereads of Raymond Chandler, and inevitably new things leap out at you every time.  (Of course the sexual weirdness just seems weirder and weirder.)

This is the only picture I've ever seen of Chandler with a drink in his hand: 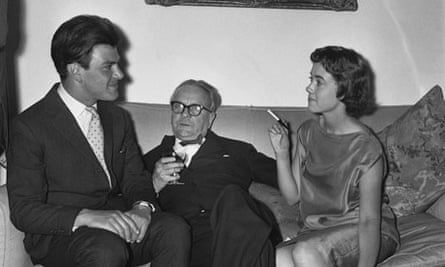 I’m well familiar with the martinis, the gimlets, the (surprising) Yorkshire pudding, but this time I was struck by the sandwiches.

In the High Window Marlowe says to some poor counter hand, ‘’Give me a cup of coffee, weak, and a very thin ham sandwich on stale bread.  No, I better not eat yet either.  Good-by.’

Earlier the book he goes to the Tigertail Lounge, orders ‘a martini and a sandwich’ and sits in ‘a shallow booth.’  What kind of sandwich goes best with a martini?

And then, The Long Goodbye he goes into overdrive

‘I went to the drugstore and ate a chicken salad sandwich and drank some coffee. The coffee was over-strained and the sandwich was as full of rich flavor as a piece torn off an old shirt.  Americans will eat anything if it is toasted and held together with a couple of toothpicks and has lettuce sticking out at the sides, preferably a little wilted.’

This seems extremely harsh on Americans and the American sandwich, and also (if you ask me) inaccurate.

Many of us have done a lot of pondering about which actor would be the perfect Marlowe.  Bogart’s OK by me, but I still think Mitchum is the MAN.

I can’t imagine Bogart’s Marlowe sitting down to a sandwich, much less making one. 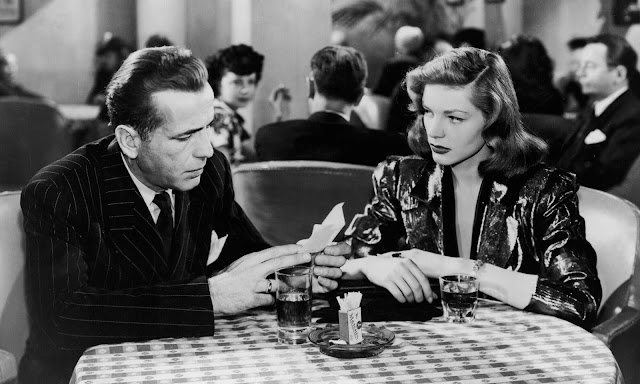 But here’s Mitchum in the Michael Winner version of The Big Sleep, doing some sandwich construction.  Hard to tell if tooth picks are involved, but he is in England. I'm guessing not. 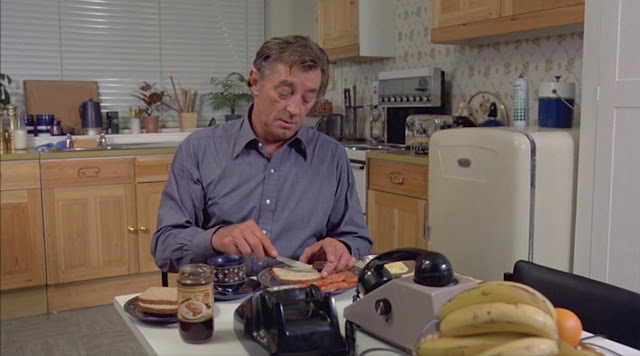 Posted by GeoffNIcholson at 10:47 AM No comments:

LONDON - NO PLACE FOR FOOD RUBES

The other weekend my very distinguished movie-world pal was in town from Berlin (not chiefly for my benefit) but we met on Sunday afternoon along with the lady friend, and after a walk in Regent’s Park we felt the need for cheesecake.

After much searching we ended up in EL&N, Market Place, just north east of Oxford Circus, very possibly in Fitrovia. They’re all over the place – one at least in Dubai. 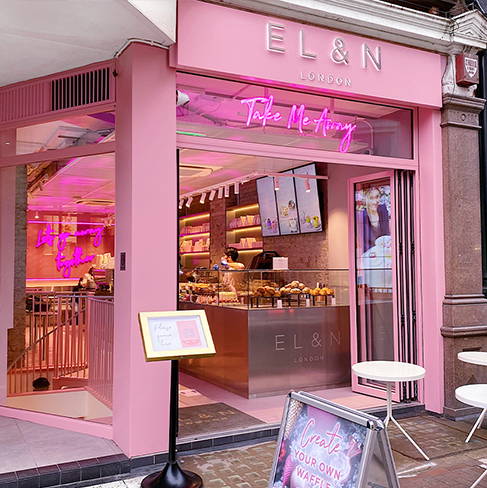 It was, I think you’d have to say, a gendered space, all pink, and full of girls with low cut flowery dresses and spray on tan.  But I’m the kind of dude who can cope with that. 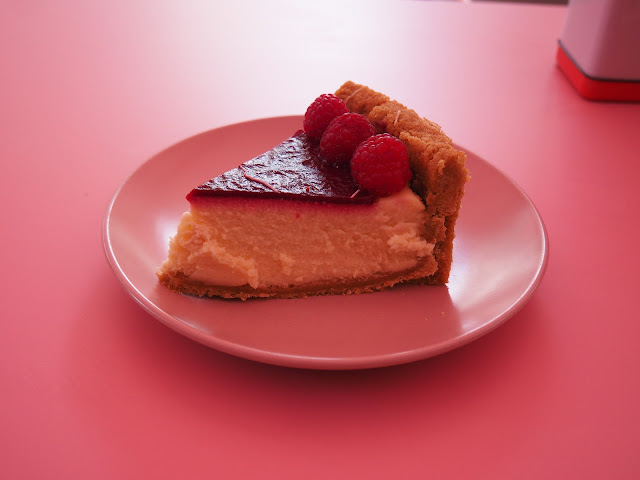 The shoutline of EL&N according to its website, is ‘Most Instagrammable café in the world.’
So obviously I didn’t put the above pic on Instagram, not least because frankly it didn’t look all that fabulous.

It tasted fine but since it cost 8 quid I did feel mildly ripped off, like I was some rube who’d fallen into a hideous tourist trap.  Which I suppose I was.

It was that kind of day.

Later four of us went to possibly the least authentic Japanese restaurant I’ve ever been to, Tonkotsu on Dean Street, Soho: 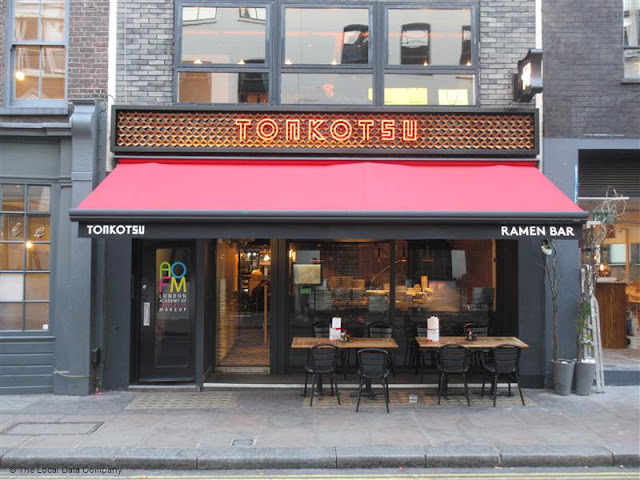 There was not a Japanese person in sight either as staff or customer, though the food was perfectly OK. The 'seasoned egg' tasted much better than it looked. 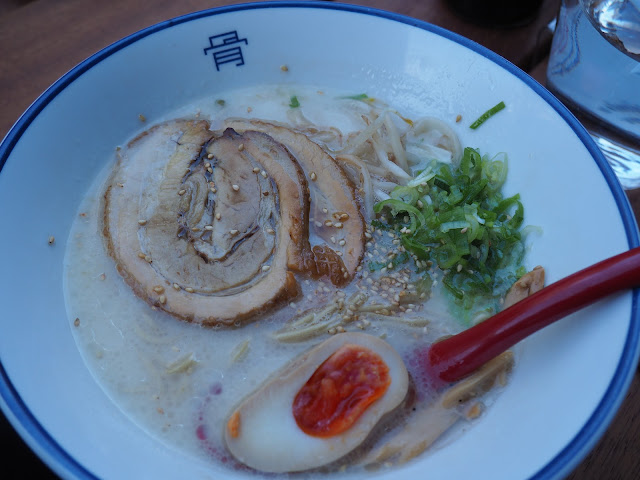 But our waiter – name of Fernando (I know because it said so on the bill) - charged us for a course we sent back because we hadn’t ordered it.  We only realized this after we’d paid up and left.  Of course we were fools not to have scrutinized the bill for waiterly malfeasance at the time, but sometimes you don’t want to have to do that. Call me a rube.  Perhaps you already did. 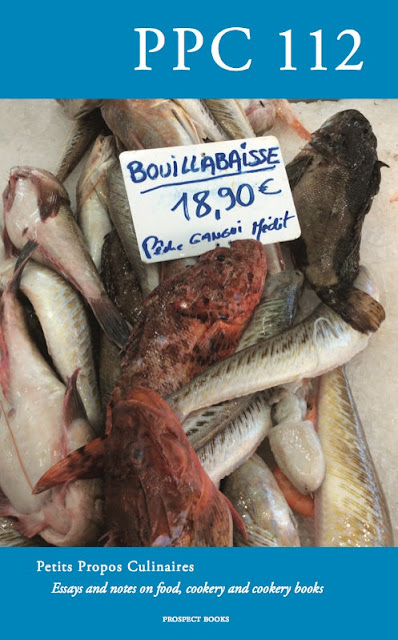 that’s ‘Petits Propos Culinaires’ – a title guaranteed to keep out the riff raff, and

Inside, among others, was an extraordinary article titled ‘Chinese Chopsticks’ by A.R.T. Kemasang who I’d never heard of but is apparently, or was in 2018 when the magazine was published, an Indonesian writer and researcher living in London.  I think it’s a man though I can’t be 100% sure.

Kemasang is very pro-chopstick especially the Chinese version. He’s less keen on Japanese chopsticks because they have pointed ends.  He writes, ‘The Japanese most probably use the pointed ends of their chopsticks as the prongs of a fork, to stab some of the food especially the spherical shaped meat balls.  It is, as you may guess, an action natural to predators of all kinds.’

Well I probably wouldn’t have guessed that, but it’s when we come on to noodles that Kemasang gets especially intense. Yes, we know that chopsticks can be used to eat noodles, he says, but why haven’t the Italians invented an equivalent for eating spaghetti?

(I wish he’d listed the strawberry huller, one of which I bought for my mum and I think it was the most successful present I ever gave her.)

Kemasang seems to think this inventiveness is in some way a bad thing, but if these things are uniquely Occidental, I do wonder how the Chinese open oysters or crack nuts.  Not with a chopstick surely.

And in any case I had to look up a few of these ‘tools’ – not least sucket fork and mote spoon.

The mote spoon, I learn, is a kind of tea spoon with a perforated scoop to filter loose tea from a cup, and also had a spiked handle to unclog tea from a teapot spout.  I had no idea.  It looks like this 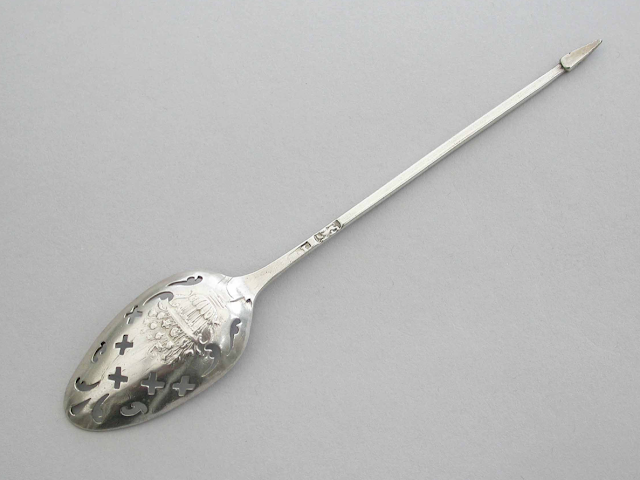 Likewise the sucket spoon was for eating sucket - a 17th century desert consisting of dried fruit and citrus peel in a syrup.  But as you see below the sucket spoon has a bowl at one end and a two-pronged fork at the other, which I’d say makes it a spork (op cit). 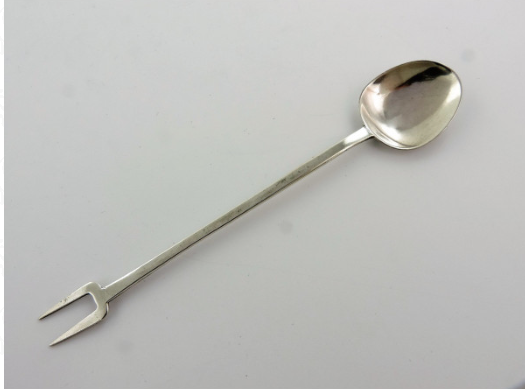 I never knew there was any such thing as an onion knife or a marrow spoon though I can see that they would both occasionally be very useful. 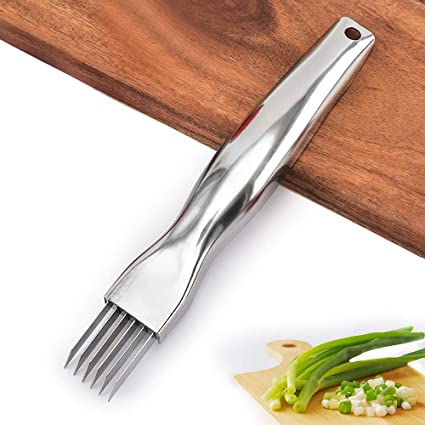 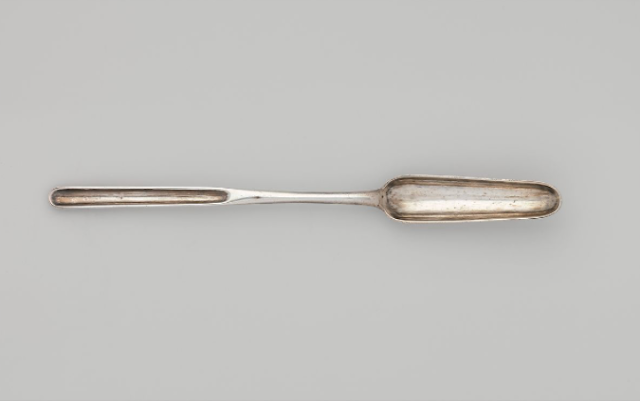 It also seems to me that inscrutable those Occidentals have indeed devised an implement or two for eating spaghetti. 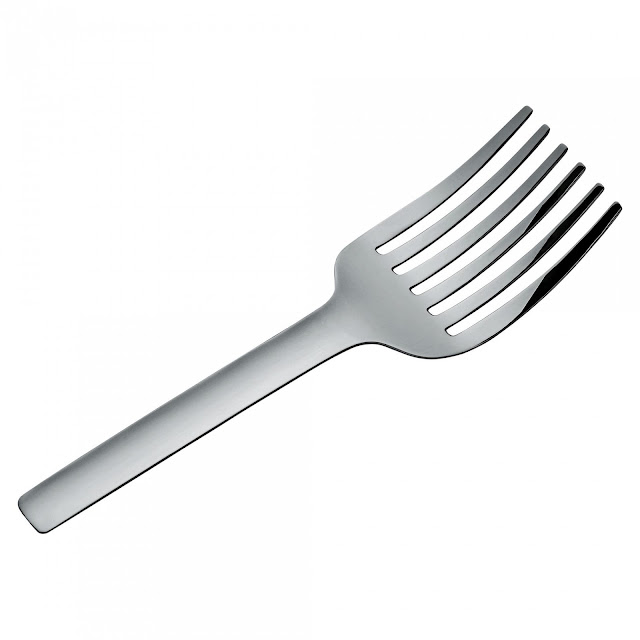 and more commonly the revolving, wind up fork: 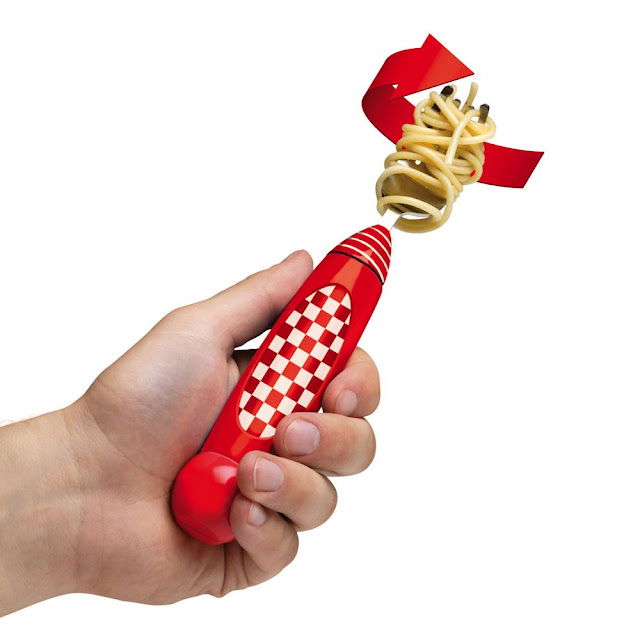 I’m not sure how well these work. Personally I’ve always been pretty happy with an ordinary western fork for eating spaghetti but I’m glad I don’t have to eat it using chopsticks.

But wait – OMG – my researches reveal the existence of something called a chork – a cross between chopsticks and a fork.  I don’t want or need one and yet I feel pleased to know  that such a thing exists. 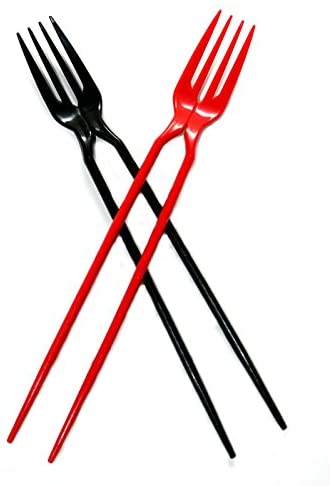 Posted by GeoffNIcholson at 3:44 AM No comments:

A man contemplates a big sandwich

It's a New Yorker from the caff at the Wellcome Collection, run by Benugo - cheese, turkey, bacon, in small quantities with a positively minute quantity of salad, though no shortage of bread. 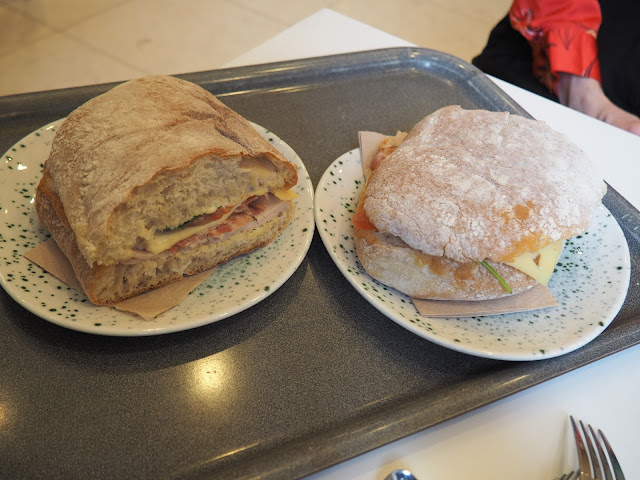 The man knows it is by no means the world’s biggest sandwich, which according to the Guinness Book of Records would be this one: 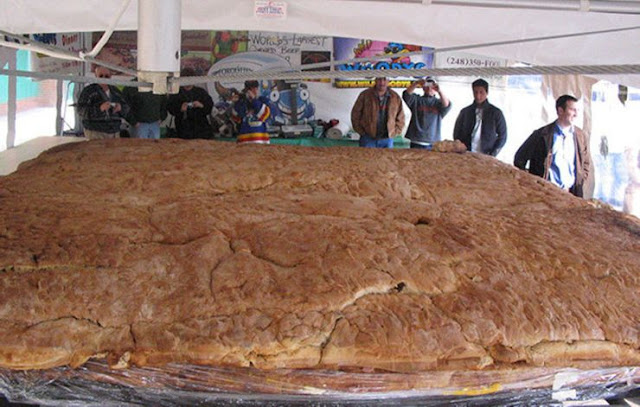 from Wild Willy’s Chill and Grill, in Michigan which weighed over 5000 pounds,  but of course that's not a sandwich that anybody could buy and eat.  It was sold off in pieces - and a piece of a giant sandwich is just a small sandwich.

Nevertheless the man thinks he has never before bought a sandwich like the New Yorker, with such a ridiculously high bread-to-filling ratio.  Much of the bread remains uneaten.

Later that same weekend the man watches a video of the Queen and Paddington Bear comparing marmalade sandwiches.  The Queen keeps hers in her handbag. 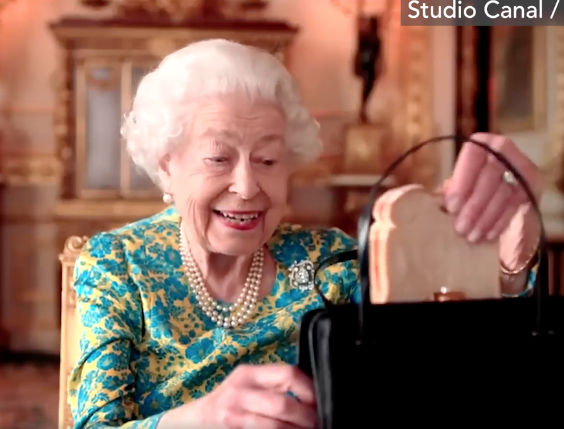 He keeps his in his hat. 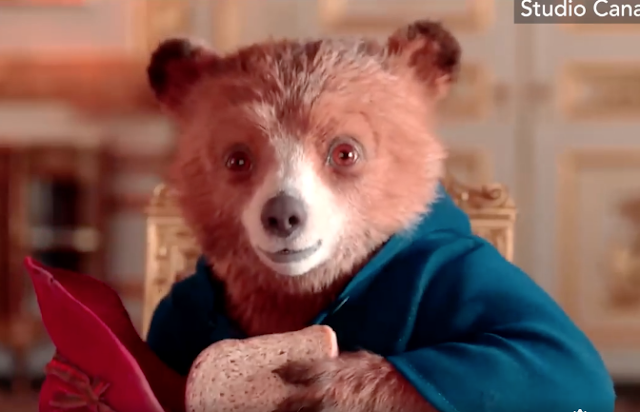 Neither sees the need for wrappings. Are her handbag and his hat full of leaked marmalade?  We don’t know, and we can only guess at the bread-to-filling ratio.

Posted by GeoffNIcholson at 9:09 AM No comments: