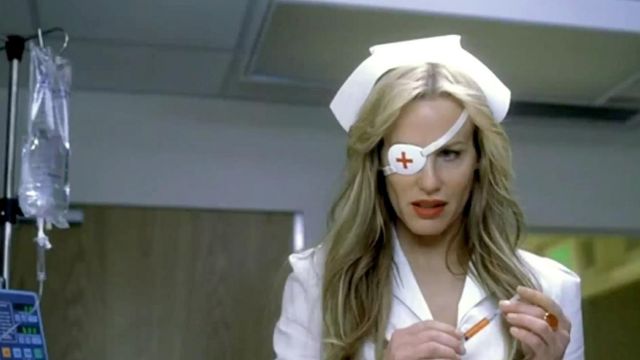 It so happened that I spent last weekend in Colchester General Hospital being ‘observed’ – a word that in medical terms covers many, many possibilities.  The story is ongoing and will either turn into farce or tragedy (I mean tragedy for me, not for you, obviously).

Weekends in hospital are rather muted experiences, not an awful lot happens medically speaking, but the staff do their best to cheer people along, not least in the food department.  On Sunday they served a roast lunch.  It looked like this: 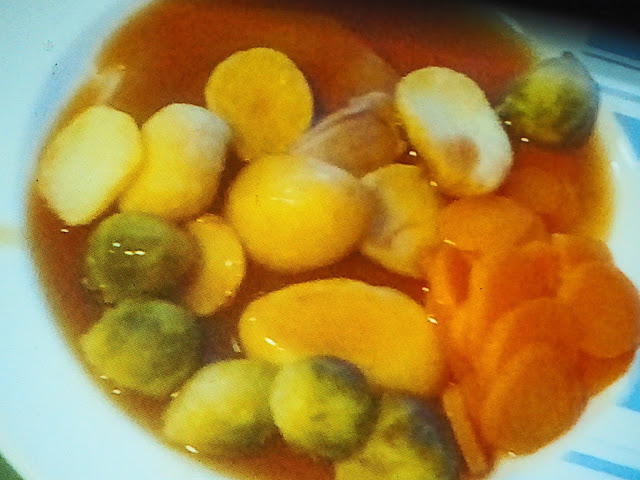 There’s a thin slice of pork under that gravy, and those roast potatoes are no worse than  you’d find in many a pub lunch.  The veggies were pretty grim, but all in all you have to admire the hospital kitchen for trying.

Other meals served up during my 'stay' included a sausage hotpot which really wasn’t bad at all, and also smoked haddock, which was in a sauce poured over pasta with fried potatoes on the side.  And there were lots of deserts; jelly and cream, sponge pudding, that kind of thing, which on this trip I couldn’t face.  It’s hard to work up much of an appetite when you’re in bed for 20 hours at a stretch.

Now, fortunately I have been in hospital very few times in my life, with long gaps between each visit, but one thing has remained constant: the food has always been sort of OK, and sometimes quite tasty, but it’s never seemed very healthy.

Once a day a trolley came round, pushed by a volunteer, and from it you could buy magazines, newspapers, and some food – mostly snacks, chocolate and biscuits, but one day I did manage to score an apple!!  An actual piece of fresh fruit.  Another day I got a banana.

I had to buy these myself, and they were very reasonably priced, and I seemed to constitute the whole of the market for them, but the notion that a hospital might regard fresh fruit as a luxury extra – well, I’m still scratching my head about that one. 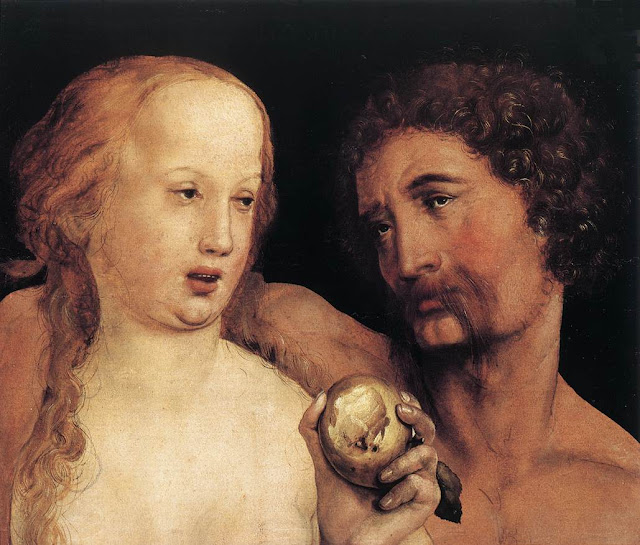 Posted by GeoffNIcholson at 1:36 AM No comments:

Meanwhile, I’ve been thinking about food expectations. Now, in one sense low expectations are always going to work in your (and a restaurant’s) favour, because if you go into a place and you think it’s going to be terrible but it turns out to me more or less OK, then you tend to think you’ve come out ahead; although this obviously doesn’t seem to be a reasonable way to go through the world. 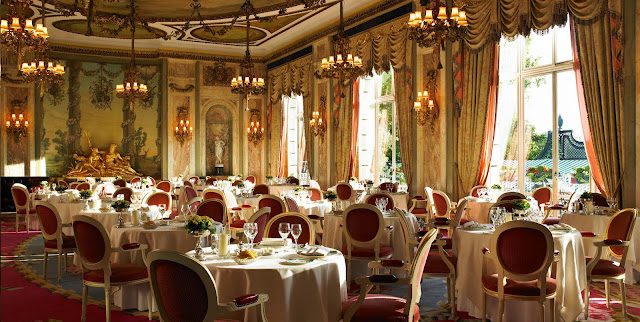 I was once taken, by my ex father in law, to the Ritz (with others), and many things were wonderful – the room, the view, the service, the plates and cutlery – but the food was ordinary.  Was I disappointed? Yes.  Had I expected too much?  Possibly.

But last weekend I was in Bristol, not on a foodie jaunt and I wasn’t expecting anything at all, and so on Friday night we ended up in a quasi-railway-themed pub called The Sidings, down by the station.  This is from the website, the gal on the left actually served me! 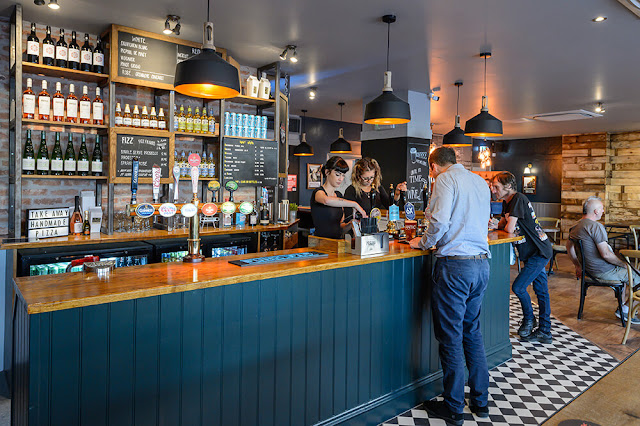 We were hungry and weary, we couldn’t be arsed to go roaming the streets looking for food, and so we ordered the Heidi Pizza from the bar – tomato, olives, pesto, goat cheese and it was really quite good, by which I suppose I mean surprisingly  good.  It exceeded expectations. Had it been served to me at the Ritz I might I have been disappointed; but it wasn’t, so I wasn’t.  It looked like this: 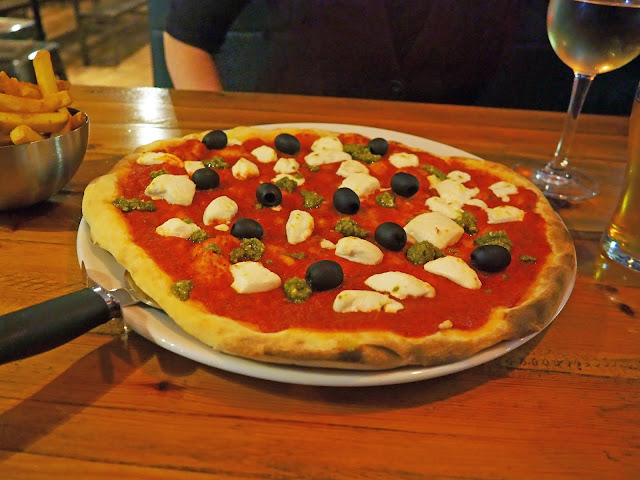 And then on Saturday afternoon, while out on a psychogeographical drift, we ended up in a pub called the Lodekka – which is the name of a kind of a kind of Bristol bus, apparently.  The pub was part of the Hungry Horse chain, owned by Greene King, but horse was not on the menu.  I mean it would have been amazing if it had been, but I hadn’t expected it so I wasn’t disappointed. 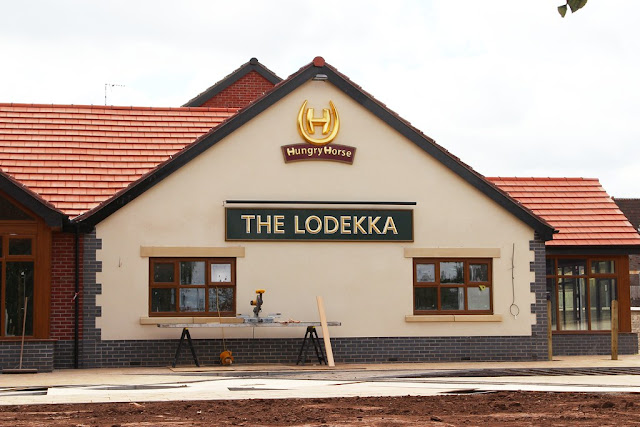 The place was full of children in the throes of sugar-rushes, and also rugby fans watching the game on a big screen. We ordered the miscellaneous fried fish platter, and it took a while to arrive, but when it came it wasn’t bad at all and way better than expected.  It  looked like this: 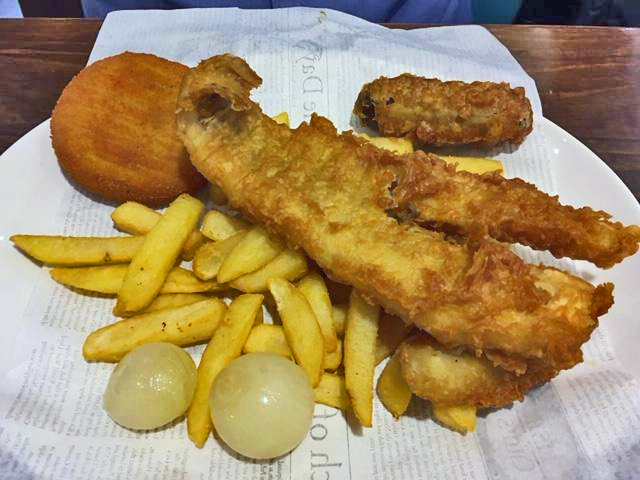 There’s all kinds of stuff in there; fish and chips, a fishcake, battered sausages, and even battered pickles, thus: 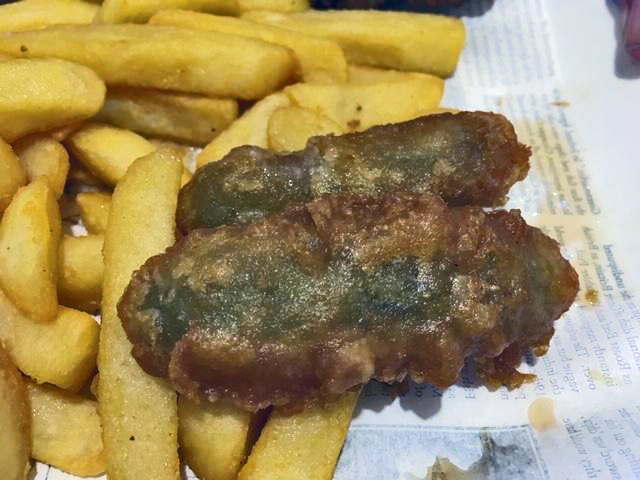 And then back in London on Sunday night, and eating in central London on a Sunday night can be a real disappointment, so we ended up in Dirty Dicks (no apostrophe) in Bishopsgate  – a decent enough historic pub. 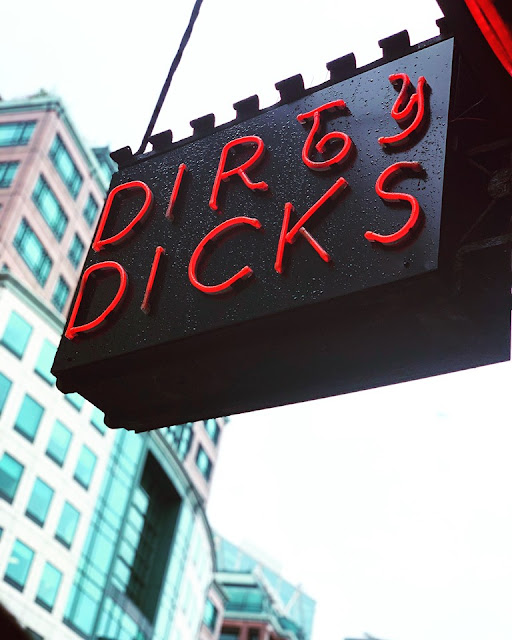 We weren’t even expecting to eat there, but we looked at the menu and it didn’t seem bad so we ordered one of the sharing boards’, Sussex Charmer Cheese, Suffolk chorizo, pork pie, sliced sausage roll with all the trimmings; pickled onions, chutney etc.  It was really good.  But - and here’s the thing - it wasn’t just better than expected – it was better than it needed to be. 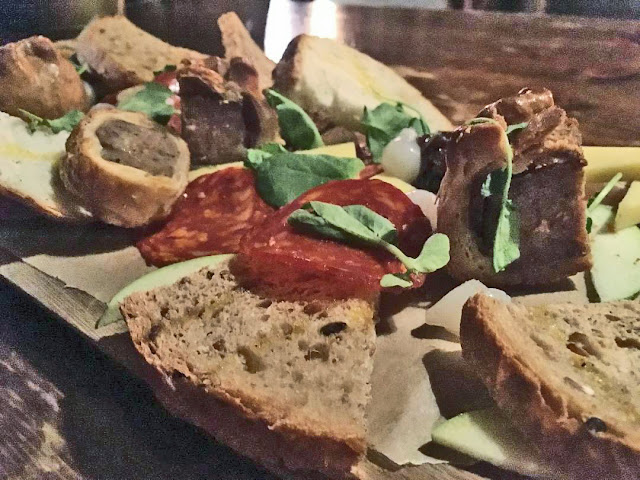 This may not be the absolute benchmark of a decent restaurant, but it’s a damn good start.
Posted by GeoffNIcholson at 2:55 AM No comments:

I AM NOT PRINCE HASLET, NOR WAS MEANT TO BE 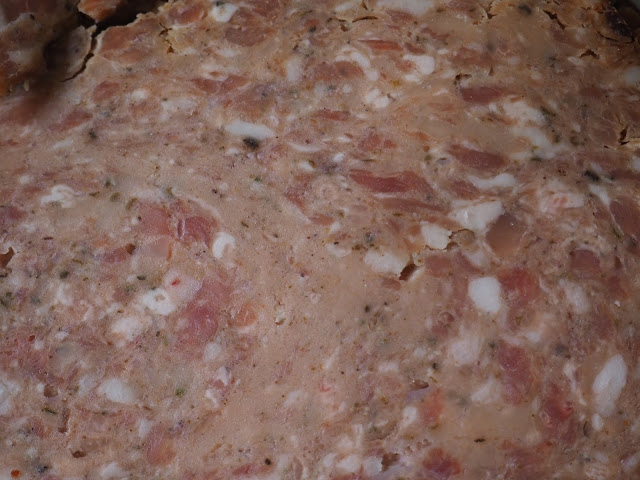 Our family ate a lot of processed meat when I was growing up – roast pork, boiled ham, even tongue sometimes, and once in a great while, haslet. 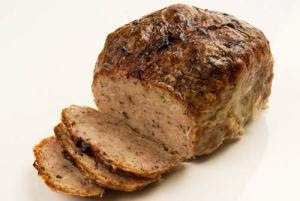 I didn’t know what haslet was at the time, and didn’t think about it much, but now I know it’s a kind of meatloaf made from left over pork bits mixed with bread crumbs.

I gather it’s a Lincolnshire speciality.  We lived in Sheffield, not a million miles away from Lincolnshire, and ours came from the local butcher.  It sounds like peasant food through and through, although I used to have a rather posh father-in-law from Hampshire who was a big fan of haslet, so obviously it has some social mobility.

Discovering that my local Co-op was selling sliced, packaged haslet, made (or at least packaged) byThe Taste of Suffolk, in Bury St Edmonds, I bought some and made a sandwich and it wasn’t bad, but it was awfully dull-tasting. Fortunately some pickled onions were at hand, and were much needed. 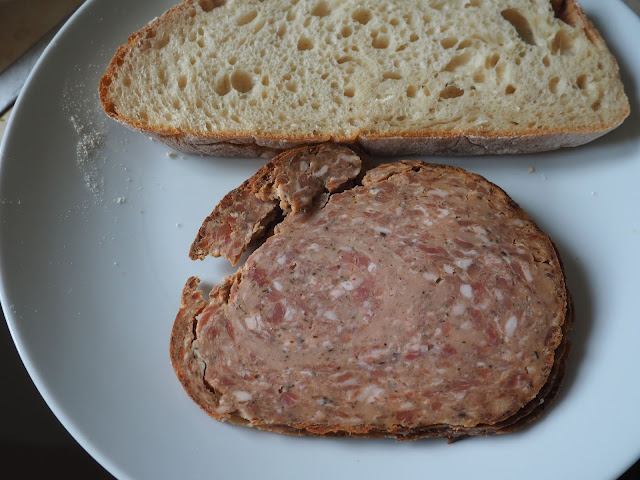 Of course I read the list of ingredients in the haslet:uncured pork trim, cured pork trim and cooked pork rind among them.  Also something they call ‘haslet seasoning,’ salt and sage being among them, but also kibbled onions.  I had never heard of kibbled onions.  I’d heard of Kibble and Bits, as in the pet food, but I didn’t know what they were in that context either.  Best as I can find, kibble is just ‘ground meal shaped into pellets’ but in the case of kibbled onions it means coarsely chopped, which looks like this apparently: 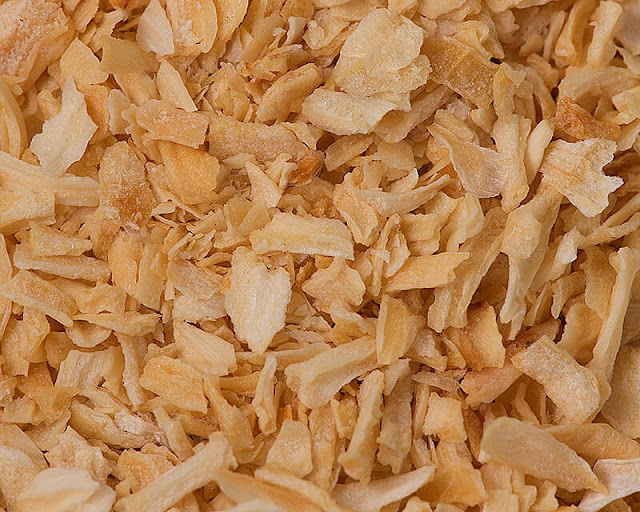 Yep, there’s no end to the excitement with haslet.

Posted by GeoffNIcholson at 2:47 AM No comments: