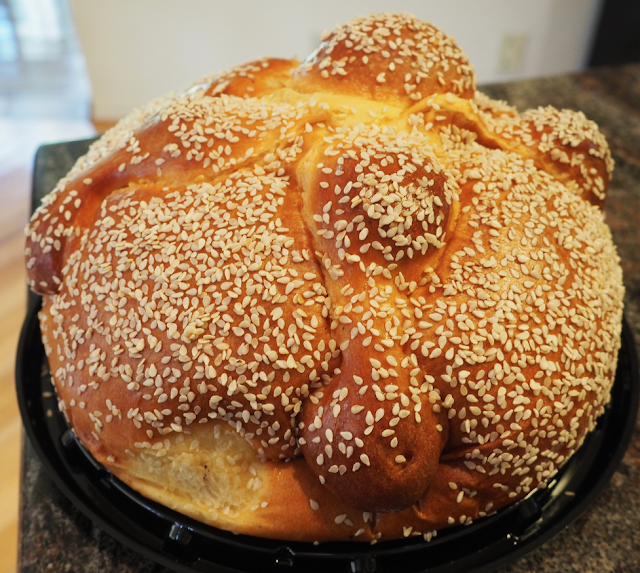 Yep, it's a store-bought pan de muerto - "bread of the dead" - suitable for eating at the graveside of ancestors, which I will not be doing, though in fact I think many of my English ancestors would really enjoy it - I mean the bread rather than me eating it graveside, but who can tell?
Posted by GeoffNIcholson at 8:23 AM No comments:

THE SANDWICHES OF YESTERYEAR AND TODAY

For a very brief period of my life, immediately after college, I was a cook (definitely not a chef) in a steak restaurant within a pub in Cambridge. I remember it as the Bath Hotel, though online evidence suggests it was the Bath House, a place with a fine history, and still in business, though no longer selling steaks as far as I can tell. 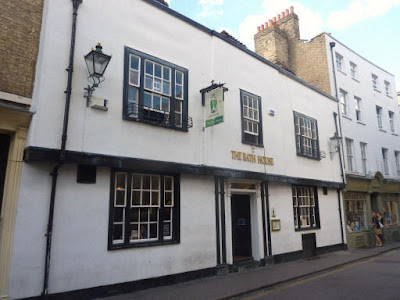 My job consisted chiefly of doing what I was told and trying to avoid being yelled at, but on Mondays, which were always very quiet, I ran the kitchen by myself.
One Monday lunchtime a customer asked for a cheese sandwich, which wasn’t on the menu, but I guess the customer was a regular.  The restaurant manager told me to make it.  I cut two thick doorsteps of bread, buttered them, cut slabs of cheddar cheese (the only type in the kitchen) and assembled the sandwich.  It was a very generous, if admittedly not very elegant creation.
The restaurant manager took one look at what I’d done and was furious, took the sandwich from me.  He discarded the bread and cut two new slices, as thin as any I’ve ever seen.  He then extracted the cheese from the sandwich and managed to recut those pieces of cheddar to maybe a third of their original thickness,.  He assembled the new sandwich and sprinkled the result with a flurry of watercress.  He showed it to me in triumph.  This was how a sandwich should be made, how it was supposed to look.  I didn’t argue because I knew there was no point.
Of course I have no longer have an absolutely clear mental picture of my original creation but last week, at a place on LA’s Sawtelle Boulevard, called Flores and Sons, I was served a grilled cheese sandwich “cheddar, gruyere, onion, honey mustard,” and I believe was even thicker.  It could have used a little less bread. 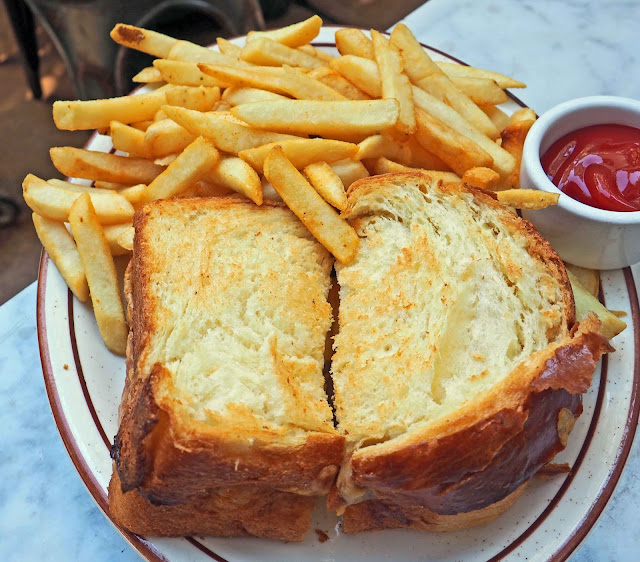 Posted by GeoffNIcholson at 8:49 AM No comments: 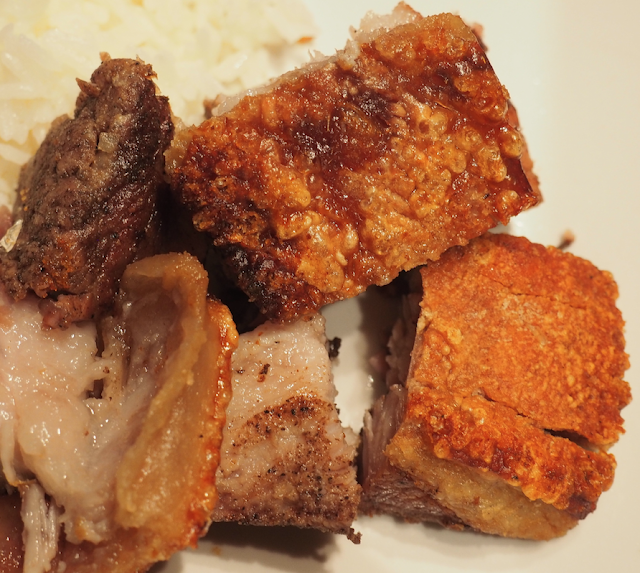 The quest for crispy pork skin never quite ends.  Most recently there was pork belly on sale in the supermarket. 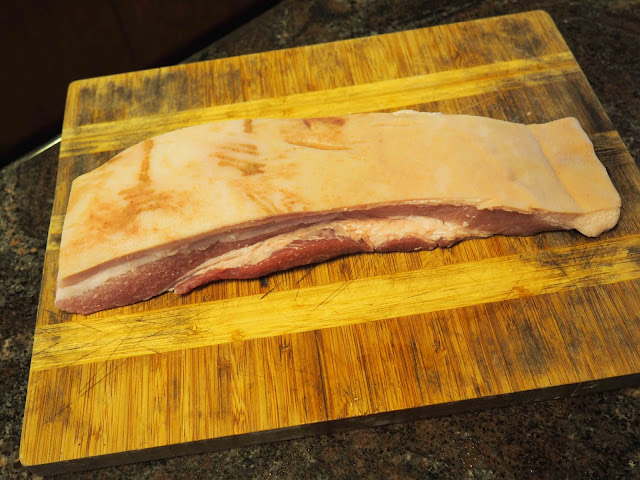 Many hours later, after drying, stabbing, 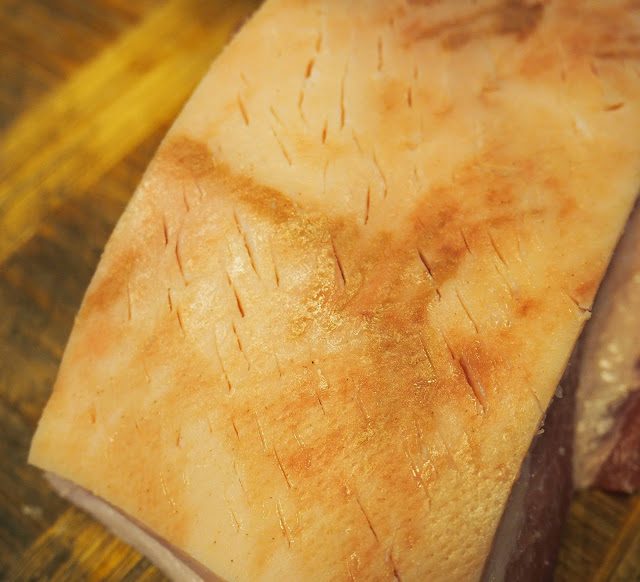 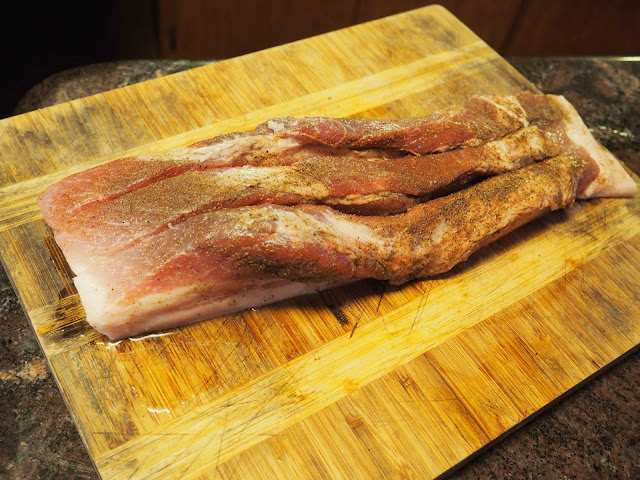 baking (a salt crust was involved – not shown) and finishing under the grill/broiler, it came out looking like this, and  also like the pic at the top of this post.: 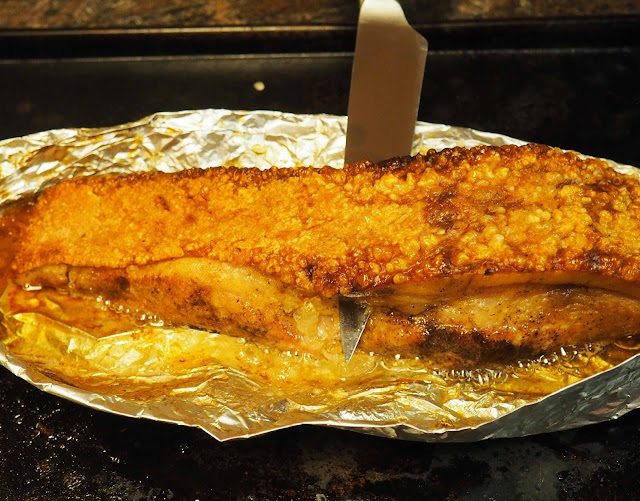 Really it was an excessive amount of faffing about, but really worth it, honest, just about.
Posted by GeoffNIcholson at 9:52 AM 1 comment: 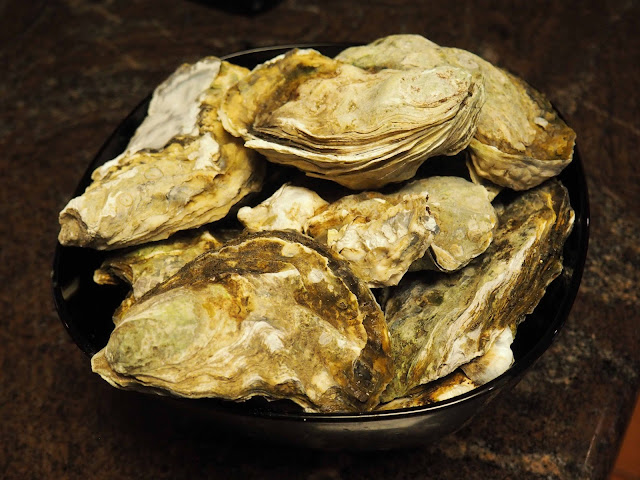 I’d heard about this place called LAX C – which is a Thai mega-supermarket on the edge of Los Angeles’s Chinatown.  I didn’t know exactly what to expect, but the hunter/gatherer in me thought it was worth an expedition.  And it was. 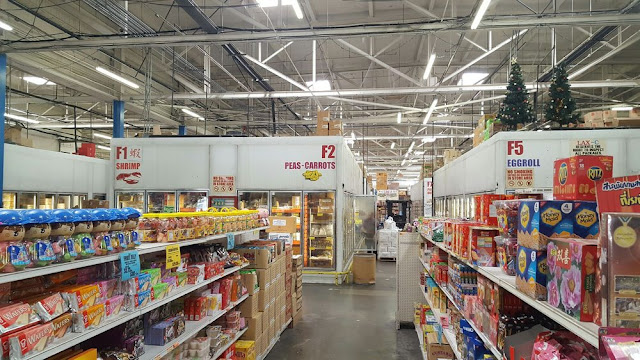 It’s a somewhat bleak hangar of a place selling industrial-size buckets of soy sauce and boxes of squid parts and pig stomachs, which you wouldn’t need unless you were in the restaurant business, but they cater to the retail trade too.  If you’re looking for preserved duck eggs or Thai coconut rolls or durian flavor ice cream, then this is the place. 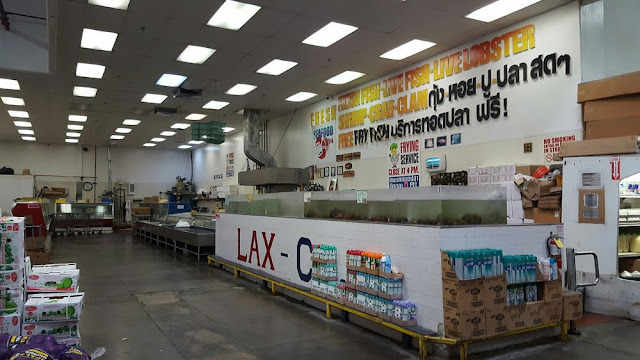 There’s a nifty fish market on premises: live lobster, belt fish and some mighty large oysters which at $9.99 a dozen were irresistible.  You can see them unopened at the top of this post.
I couldn’t tell you their provenance – the fish guy and I didn’t share a common language - and opening a dozen of them at home was a bit of a project, but well worth it – they were sweet, creamy, mild, a bit less oceanic than most oysters but still darned good. 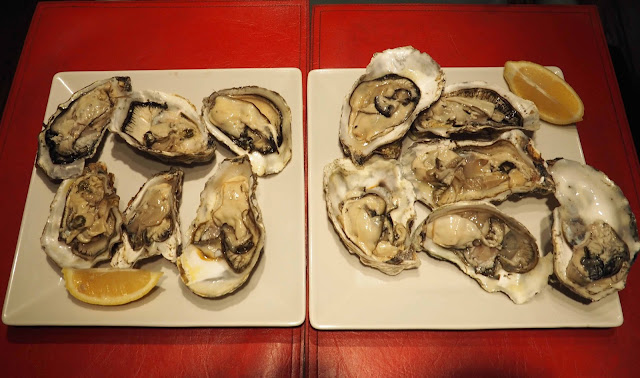 There were sausages galore, such as this pork and lemongrass one. 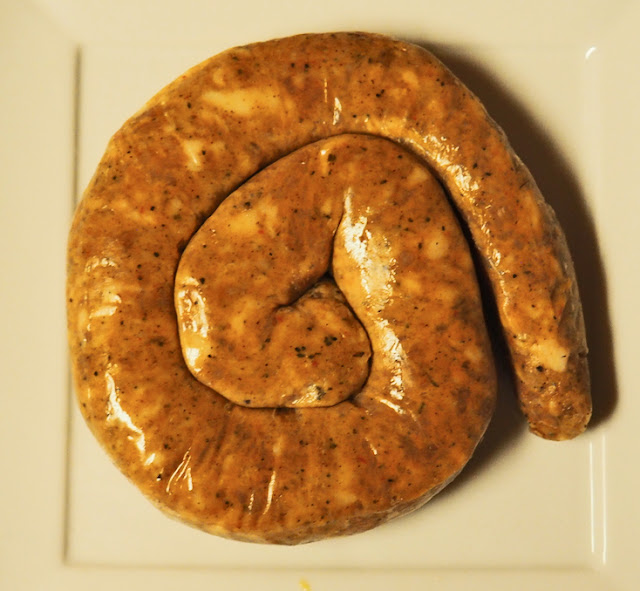 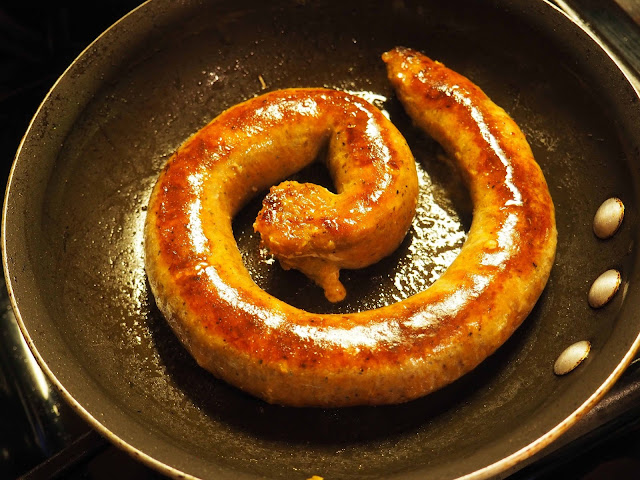 And not least, LAX C is a place that sells pork blood – or Dugo Ng Baboy, if you prefer.  Yep, I see some black puddings being made in my near future. 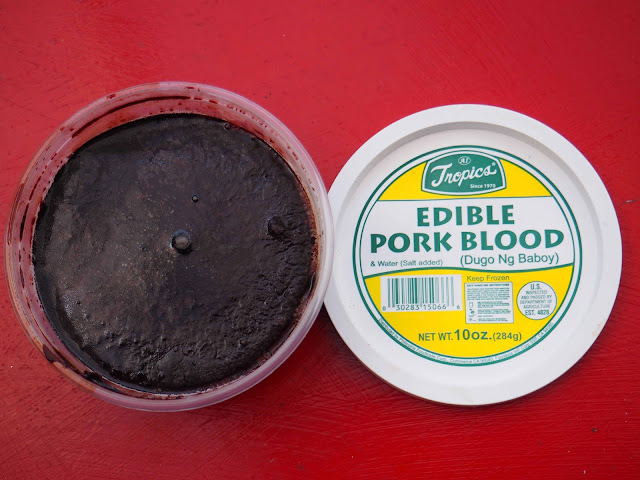 Posted by GeoffNIcholson at 11:32 AM No comments:

EVERYTHING TASTES BETTER WITH HOOVES

I used to eat with relish the brains of beasts and fowls.  But with all this talk about prions and bovine spongiform encephalopathy, and even as I understand that many of the dangers have been much exaggerated and in any case only apply to mad cows, eating brains no longer seems such an appealing idea.  But that doesn’t mean I can’t have brain-related fun. 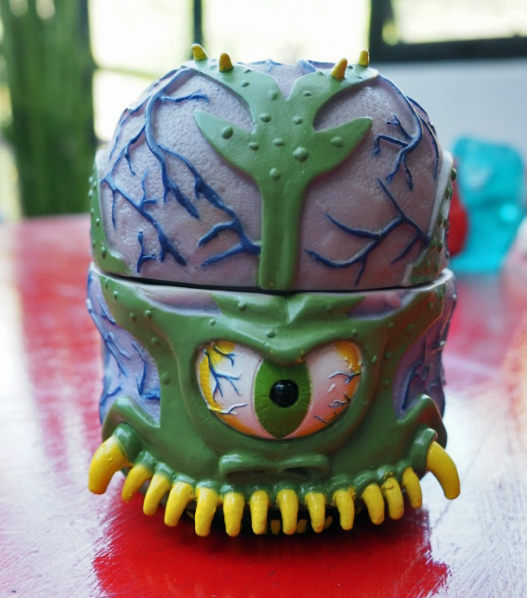 See, I have this rubber monster head (above) which is in fact a jelly mould: 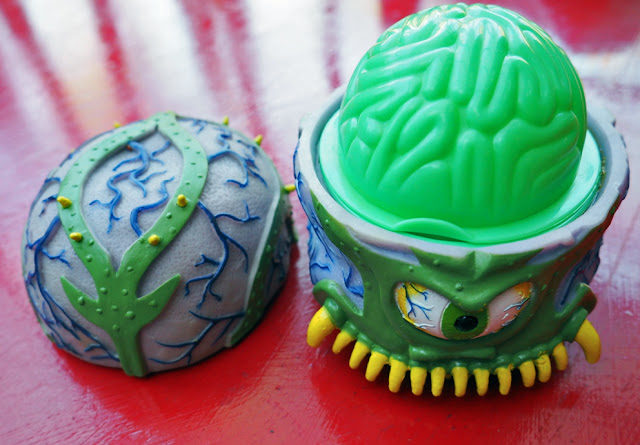 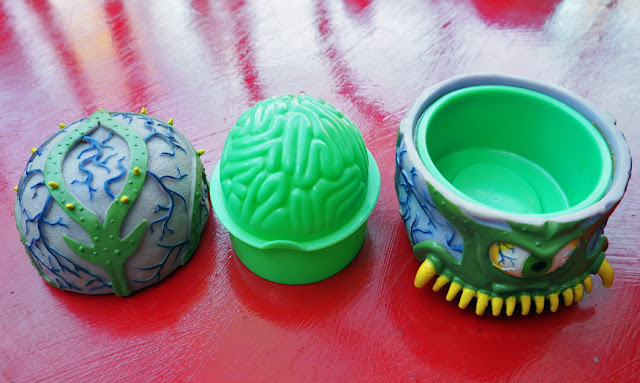 You open it up, put jelly in the brain pan, and a few hours later its set and you have dessert in the shape of a brain: 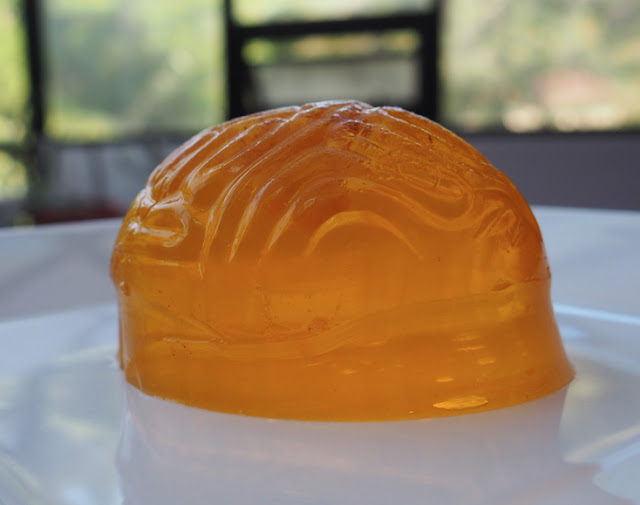 Those brownish speckles up at the top are cinnamon – there’s also a blob of rice pudding in there – hey, check out the symbolism!

You understand of course that in all this I am not trying to compete with the mighty Bompas and Parr – I know I couldn’t could.  Especially when they come up with stuff like this, seen recently on their Instagram – it’s Stir Fry Jelly: 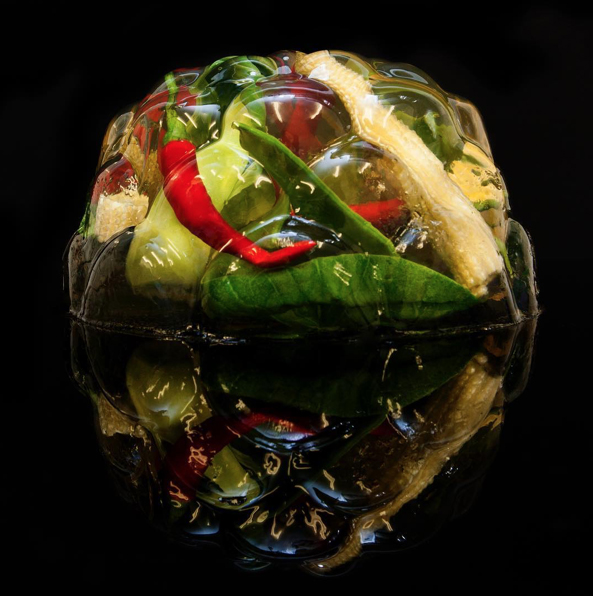 They meet a better class of photographer than I do.
Posted by GeoffNIcholson at 10:45 AM No comments: