DRUNK FOR PLEASURE AND PROFIT

I was thinking about Buster Keaton, as I often do, and I came across this ad of the great stone face shilling for Country Club Malt Liquor: 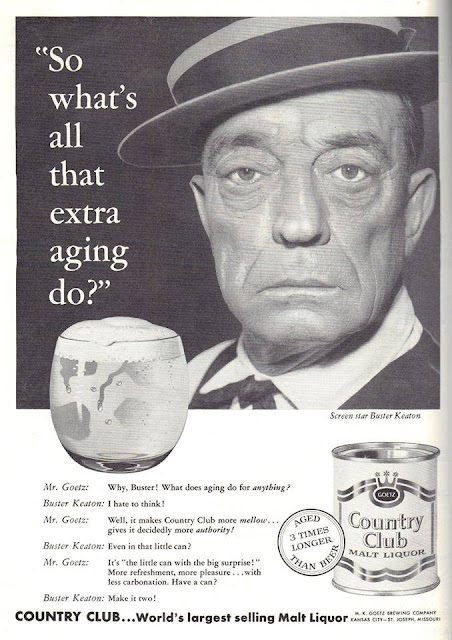 Now, even people who know very little about Buster Keaton are likely to know that he had a problem with alcohol.  I never think problems with alcohol need much “explaining,” but it seems especially understandable in Keaton’s case.  The poor guy ruined himself doing stunts.  He fractured his neck while filming Sherlock Junior, and only found out about it years later.  I imagine he must have been in serious physical pain most of the time, and needed all the anesthesia he could get.  Who’d deny him a few malt liquors? 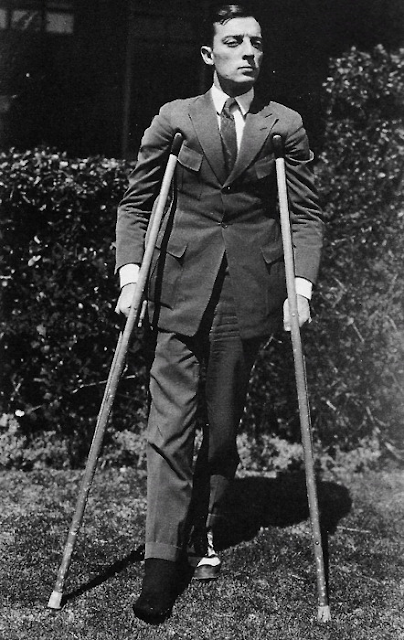 And of course (op cit on this blog) Errol Flynn appeared in ads for “ready to serve” Heublein cocktails. (Hey, you know I love you Errol, but are you really sure about that hat?). 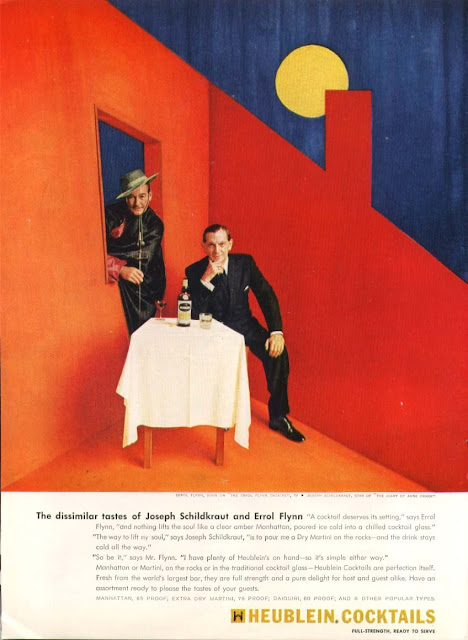 One problem you might imagine with serious drunks is that they’re not usually great advertisements for alcohol.  For that matter, beyond a certain stage they don’t much care what they drink. 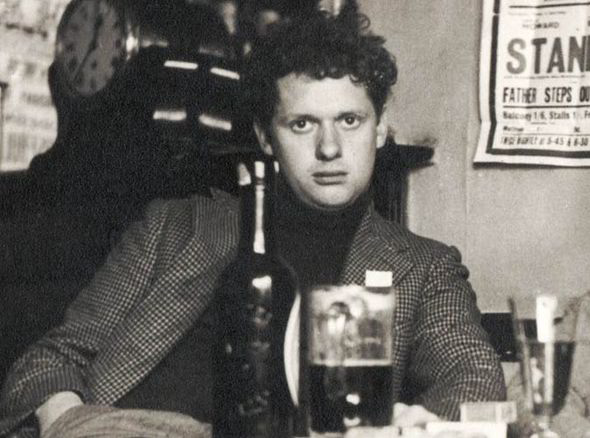 Certainly the young Dylan Thomas was quite a good-looking young man.  The older version less so, and since he died when he was just 39, worse was surely ahead. 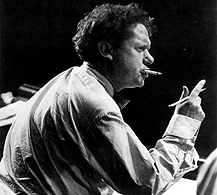 Even so, this hasn’t stopped his face appearing on the bottles of Penderyn whisky, though his face actually looks better on the box than on the glass. 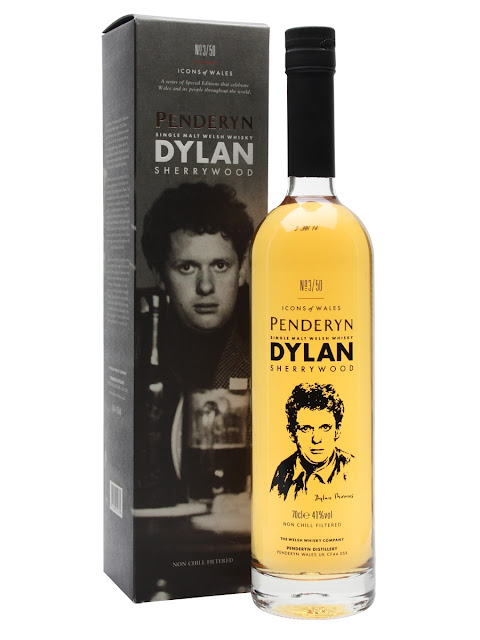 And shrewd Dylan Thomas watchers will be aware that the image on the box is actually cropped from a larger photograph which shows him with his wife Caitlin, who I’m sure would be disappointed not to have made it onto the packaging. 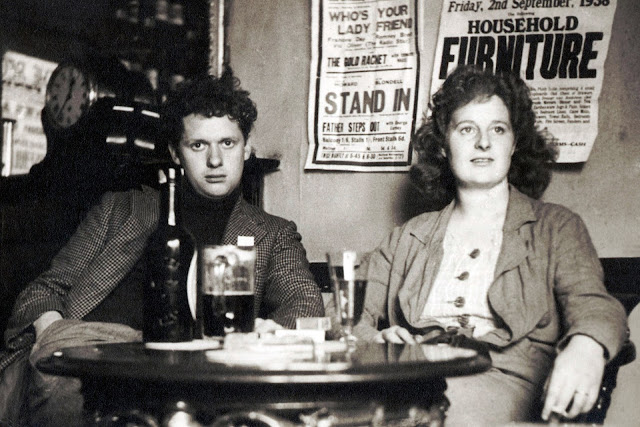 Now that I think about it of course I remember that Hunter S. Thompson was invoked by Flying Dog in a series of “tribute beers” though admittedly the Ralph Steadman beer labels may have be a great part of the attraction.  Speaking as someone who was once in the same room as drunk and raging Thompson  (a semi-public event and the room was large enough but it soon seemed far too small to contain the drunken rage of Mr. T) I’m not sure I’d necessarily want whatever he’s having. 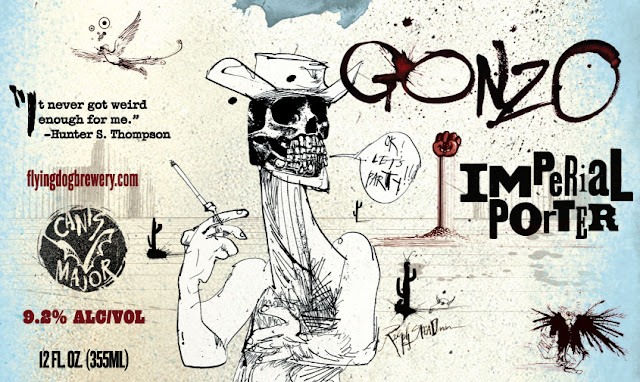 One famous drunk writer it’s hard to imagine as a poster boy for any alcoholic beverage is Malcolm Lowry, (a one-time temporary Angelino – lived in the Hotel Normandie for a while, drank in the Brown Derby), author of Under the Volcano. 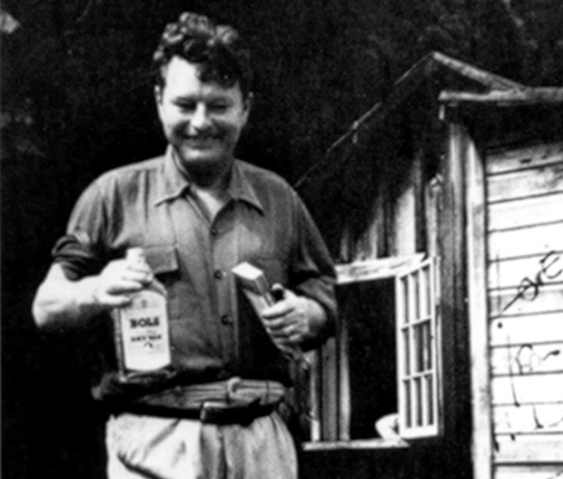 According to Martin Amis reviewing Pursued by Furies: A Life of Malcolm Lowry by Gordon Bowker,  “To make a real success of being an alcoholic, to go all the way with it, you need to be other things too: shifty, unfastidious, solipsistic, insecure and indefatigable. Lowry was additionally equipped with an extra-small penis, which really seemed to help.”

So Lowry was not exactly an advertiser’s dream, although I suspect he could have written some lively advertising copy:  this from Under the Volcano  “Far above him a few white clouds were racing windily after a pale gibbous moon. Drink all morning, they said to him, drink all day. This is life!”   Don Draper would probably have cut that “gibbous.”

Posted by GeoffNIcholson at 1:42 PM No comments: 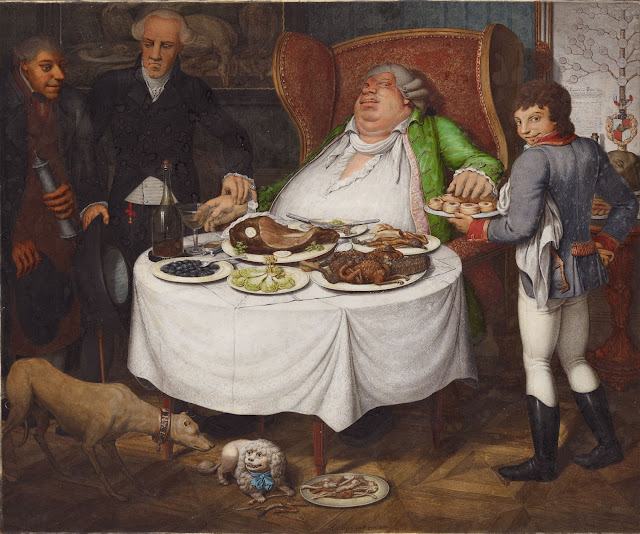 I went to an eating contest at the weekend; as a spectator, not a competitor, obviously. It was my first time.  I’ve always found the idea of competitive eating simultaneously compelling and offensive, and I’m sure you don’t need me to point out the many glaring moral and aesthetic objections.

This was a slightly specialized event.  It was Nisei week in LA, a festival of many things Japanese, and so around Little Tokyo there were exhibitions of bonsai and calligraphy and dolls, and the food to be eaten in the contest was gyoza, also known as pot stickers, though I gather connoisseurs make a distinction between the two things. 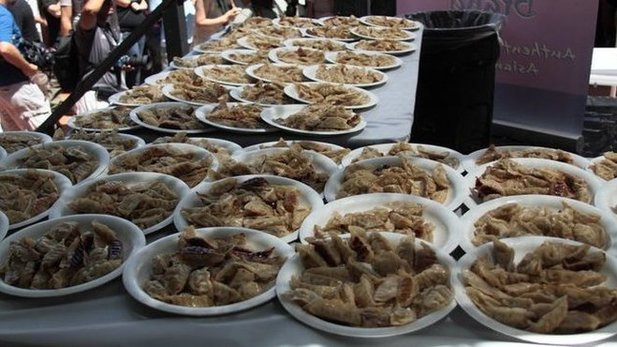 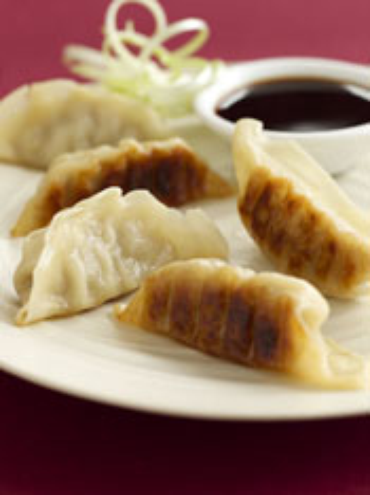 In fact the contest turned out to be a slightly bigger deal than I’d imagined.  To give the official title it was the Day-Lee Foods World Gyoza Eating Championship, and I did recognize one of the contestants, or at least his name – Joey Chestnut - who I seemed to recall winning various Nathan’s Hot-dog eating contests on Coney Island. 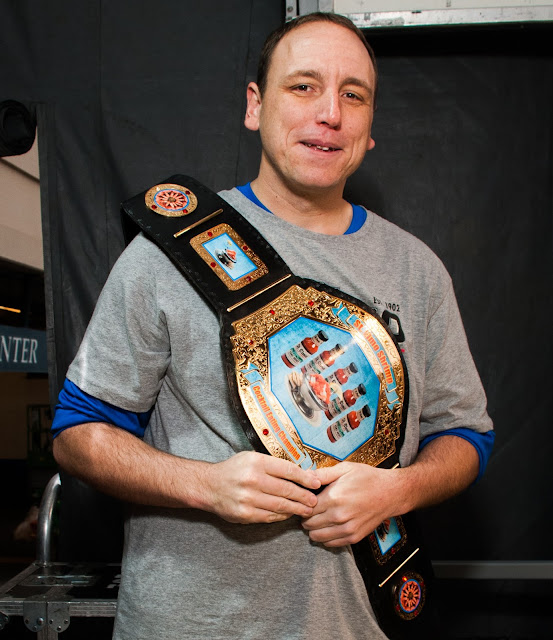 A little research shows that in recent times he’s lost out to Matt “The Megatoad” Stonie, and he too was also on the bill.  A quality field. 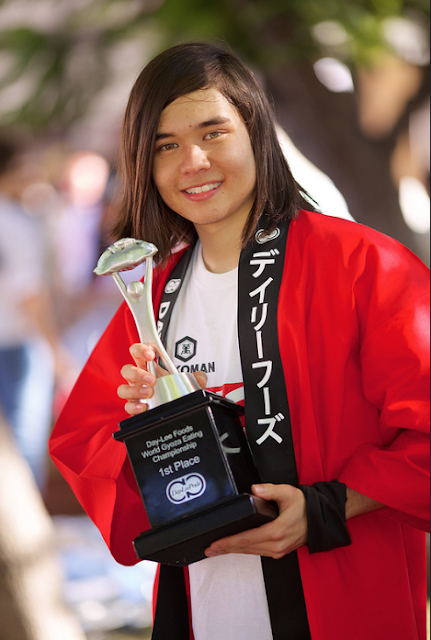 Contestants had ten minutes to eat as many gyoza as they could, which in some ways doesn’t seem very long: probably there’s a health and safety issue.  And I’d assumed there’d be some “technique” on display, some special tricks of the trade for getting the food down rapidly, but at least to the untutored eye, it seemed that once the contest started they were all doing pretty much the same thing, just taking handfuls of gyoza and shoving them in their mouth.

Watching people stuff themselves with food isn’t one of the world’s greatest pleasures, and certainly some of the contestants didn’t look like they were having the very best time – there was a lot of grimacing – but nobody collapsed and nobody threw up, for which I was essentially grateful, though obviously it would have added to the spectacle. 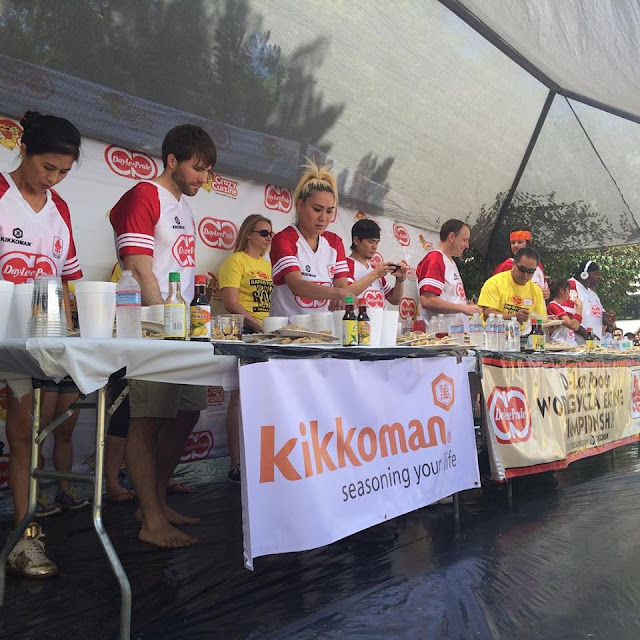 While the contest was actually going on it was also impossible to tell who was in the lead or how much had been eaten – there was no score card, and all the  totting up was done at the end.

Anyway, to cut a short story even shorter, Stonie just sneaked a win – he ate 343 gyoza compared with Chestnut’s 339 – each of these numbers being more or less twice the number eaten by the nearest competitors - Miki Sudo came third with 178.  (FYI - each gyoza contains 30 calories).

The prize money wasn’t exactly princely, first prize was $2000, but I gather there’s a professional circuit with sponsorship and TV coverage and contracts, and there’s even a governing body called Major League Eating, though I’m still in the dark about how the finances work. 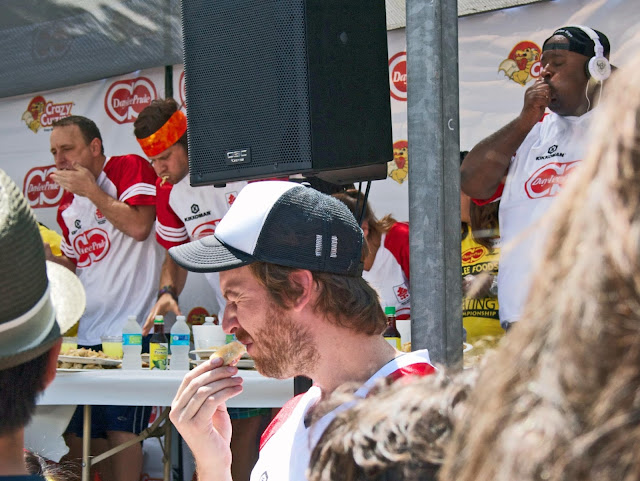 The fellow above, at the front, with the agonized expression, is one Matt Ralston, who (if I heard the MC correctly) was a “ringer” writing a piece for the LA Weekly, and he really wasn’t trying.  He ate a mere eight. 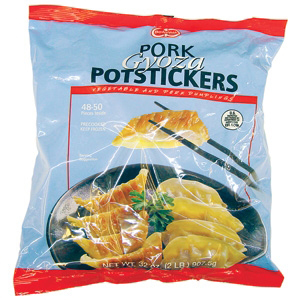 Afterwards, drifting into the nearest Little Tokyo supermarket there was a very sweet Japanese lady cooking up Day-Lee gyoza and offering free samples.  These were hot and crispy – the ones at the eating contest were just boiled and obviously cold and perhaps a bit wet which would have helped them slide down more easily.  So inevitably I bought a bag of frozen pork gyoza and took them home and cooked a batch.  Nine gyoza for two of us.   It was plenty, though I could probably have eaten more. 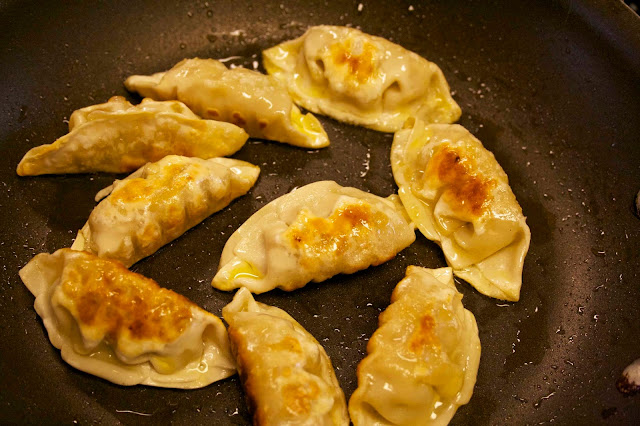 Posted by GeoffNIcholson at 2:59 PM No comments: 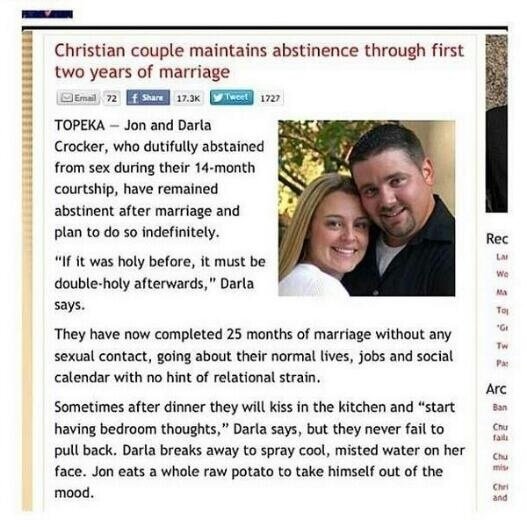 I always suspected the above was a satire, and so it proves, and in the end I'm very glad that some poor devil isn't mortifying his flesh with cold potatoes: that would be a waste of the flesh and of a good potato.

However, it did get me thinking about, as it were, the raw and the cooked.  Some foods I like at least as much raw as I do cooked - carrots, mushrooms, sushi grade tuna, to name but a few.  Potatoes, alas, don't come into this category. 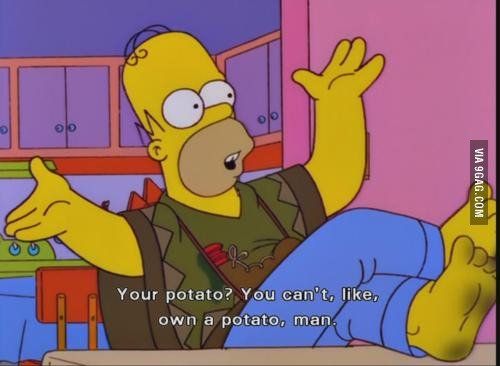 Posted by GeoffNIcholson at 3:02 PM No comments: