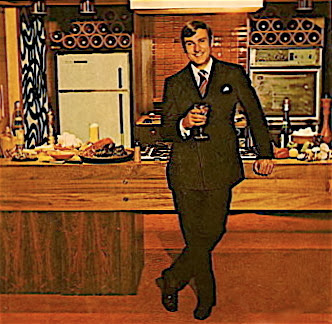 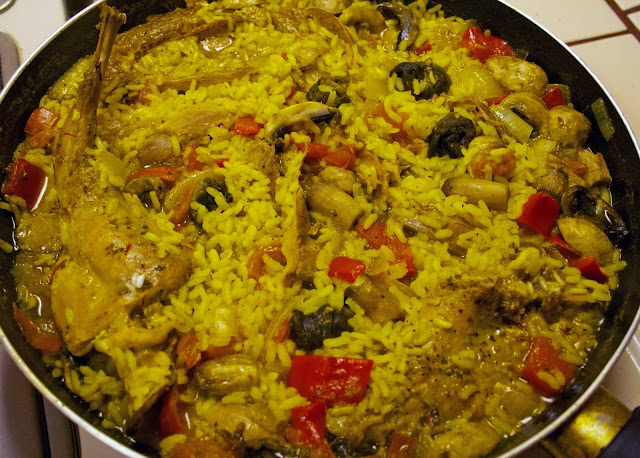 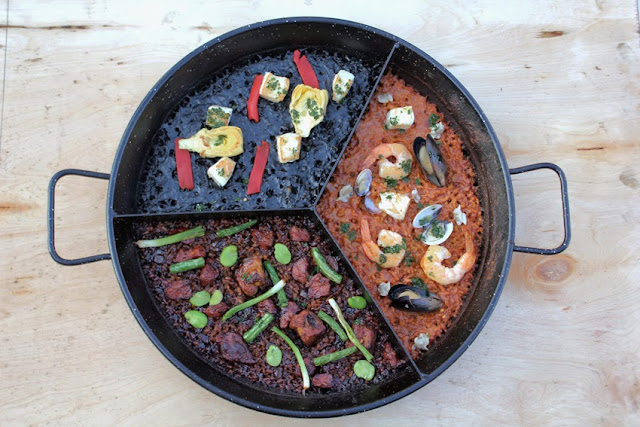 Posted by GeoffNIcholson at 10:35 AM No comments: 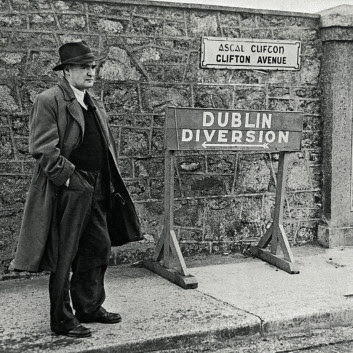 It’s probably no great disadvantage for a writer to be named after a kind of food.  Take the example of Flann O’Brien, born Brian O’Nolan, and sometimes known as Myles na gCopaleen, and occasionally as Brother Barnabas or George Knowall, among other pen names.  At Swim-Two-Birds and The Third Policeman are the two great books, and a good, searching look along my bookshelves proves that my copies have been "borrowed."

Back in the day, when I was involved with what we used to call “London fringe theatre” I had a semi-girlfriend who acted in a stage version of The Third Policeman.  She dressed up as a strangely convincing and very lovely heifer. And she recited the poem The Workman’s Friend, which in fact comes from At Swim-Two-Birds, but was obviously thought too good not to include in the production.

attractive raven-haired woman dressed up as a cow):

“When food is scarce and your larder bare
And no rashers grease your pan,
When hunger grows as your meals are rare –
A PINT OF PLAIN IS YOUR ONLY MAN.” 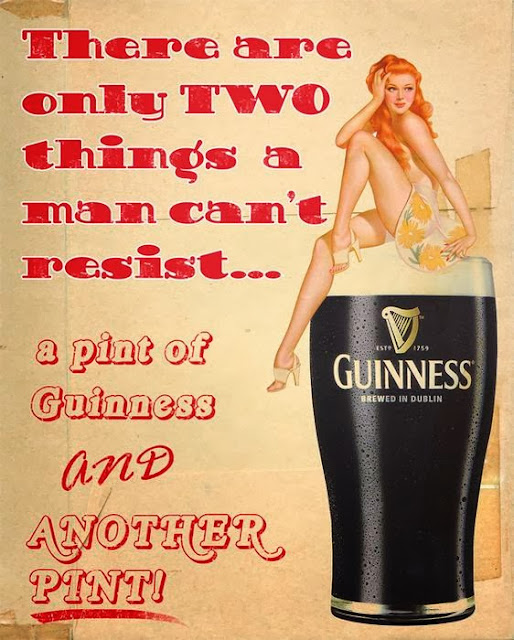 I don’t know much about O’Brien’s eating habits, but we do know he was a serious alcoholic, also a depressive, cripplingly disappointed by his lack of literary fame and success (that old chestnut).  In the latest edition of the London Review of Books Jonathan Coe writes about two newly published collections of O'Brien’s work, one a volume of plays and teleplays, the other of his short fiction.  Coe quotes from a piece titled Slattery’s Sago Saga, which he doesn't really rate, but it had me chuckling fit to bust.
“The forenoon passed quickly and it was about two o’clock in the early autumn day when Tim sat down to his heaped dinner of cabbage, bacon, pulverized sausage, and sound boiled potatoes of the breed of Earthquake Wonder.”

I’ve never worked out precisely how many breeds of potato there are, and perhaps nobody even really knows, nor am I sure exactly what constitutes a breed, but I see the figure “over 4,000” regularly quoted.  They do have some fancy and improbable names, and of course the Irish potato famine was exacerbated by an over reliance on the Irish Lumper, a name that sounds absolutely weighted down with doom. 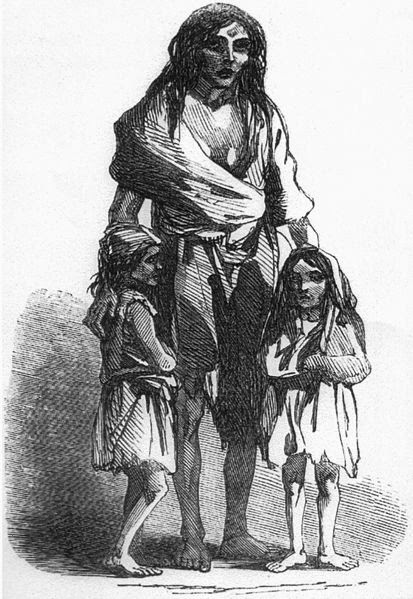 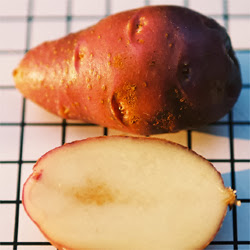 Potatoes do seem to have been on O’Brien’s mind quite often one way or another, and sometimes in connection with his lack of literary “success.”  He once complained (though I haven’t been able to find out exactly where) “Gone with The Wind keeps me up awake at night sometimes – I mean, the quantity of potatoes earned by the talented lady novelist.” 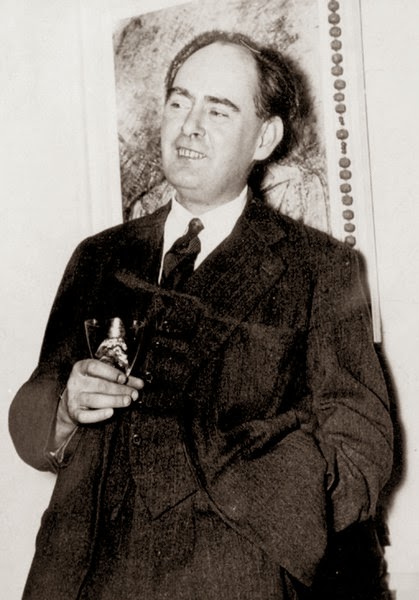 Posted by GeoffNIcholson at 1:31 PM 2 comments:


As a believer in lost causes and dying forms, I do wonder what fate awaits the picture postcard.  I used to love sending and receiving them, but now I wonder how much longer you’ll even be able to find them. There was apparently a time when any self-respecting restaurant, and even many a humble diner, would have postcards printed up as a way of spreading the word about themselves. 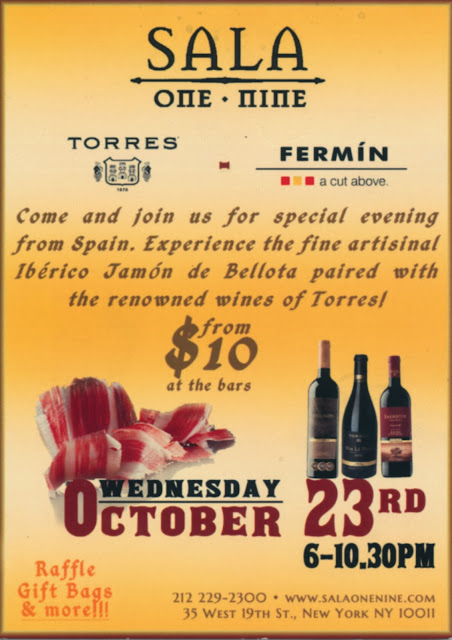 And in fact one or two still do – I picked up the one above in a pretty decent Spanish restaurant in Manhattan, but it kind of lacks style - and in any case nobody ever thinks you’re going to send them through the post.  In the age of the tweet and Instagram, who can be bothered to find a stamp and a mail box? 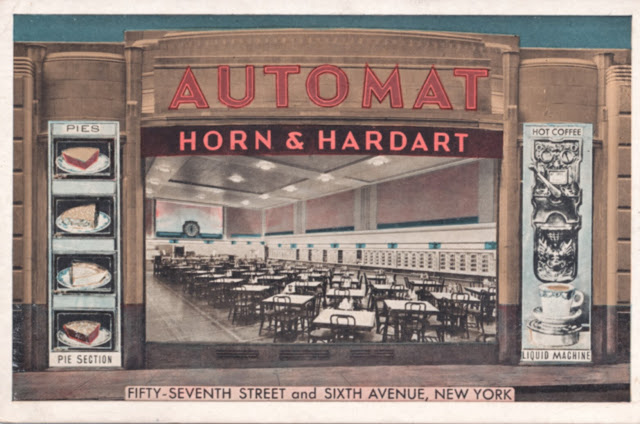 So, on my travels in New York I was delighted to pick up, in a bookshop actually (another dying form), a couple of rather wonderful old postcards.  The one above for the Horn and Hardart Automat, a place that still has a mythical status as far as I’m concerned.  And this one below for Sloppy Louie’s Restaurant. 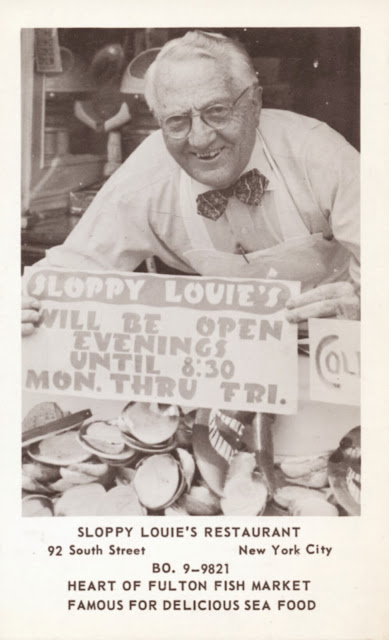 When I bought it I’d have said I’d never heard of Sloppy Louie’s, but then I remembered, or realized, that it (and its owner Louis Marino) features in Joseph Mitchell’s Up In The Old Hotel, which In fact I read fairly recently.  Ah memory …

I’m not sure that I’m exactly a postcard collector, but I do pick up interesting ones when I see them; the more curious the better, naturally.  But few old postcards are quite as curious as this one I picked up in Kingston, New York, advertising a current program called “Ales For Alzheimer’s.” 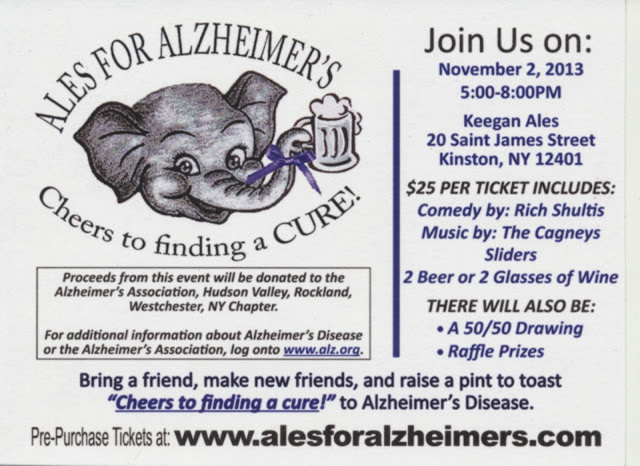 I’m sure it’s a good and well-meaning cause, and if you wouldn’t necessarily think that drinking beer was the most obvious way of fighting Alzheimer’s, at least, unlike the elephant on the card, booze may be a way of forgetting rather than remembering your troubles. Cheers indeed.

So naturally I started thinking about other charitable options: champagne for shingles, cocktails of colon cancer, rickeys for rickets, cider for cystitis, negronis for necrosis … I could go on.  I won’t go on.
Posted by GeoffNIcholson at 5:48 PM No comments:

A SANDWICH FOR THE END OF THE WORLD 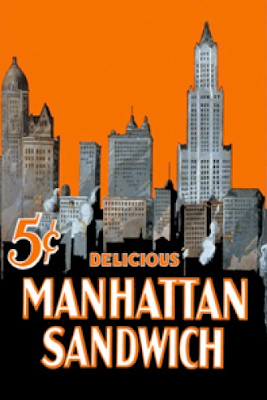 And were sandwiches eaten on my trip to New York?  Why yes, yes they were.  Of course, nobody goes to New York just for the sandwiches, but given the general ubiquity of the form, it’d be strange if you didn’t occasionally find yourself eating one.   I always feel a bit of a tool taking pictures of my meals (though lord knows nobody else ever seems to have any such inhibitions) but when the sandwich is as beautifully lit as this one, it’s hard to resist. 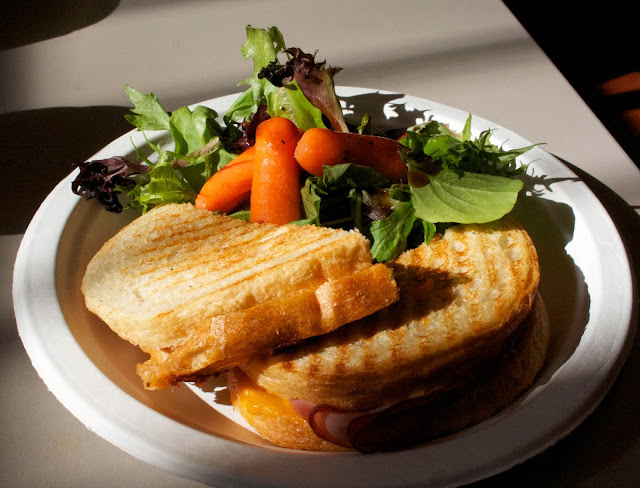 That is, in fact, a fairly humble grilled ham and cheese, eaten in the Café on One, in the American Museum of Natural History.  And yes, those are a couple of raw baby carrots rising up from the salad.  And now that I think about it, I reckon that raw carrots are probably my favorite vegetable in the whole world.  Especially when, like these, they have vinaigrette on them. 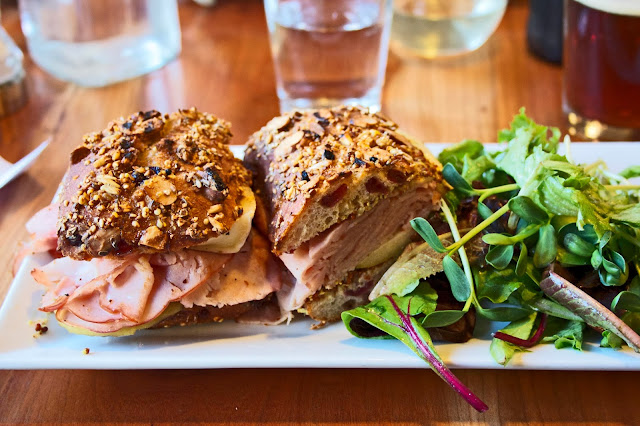 Another picturesque sandwich was the one above, eaten at Bread Alone in Rhinebeck.  It’s ham and cheese again, actually ham & brie, and it came with sliced apple and whole grain mustard, and the bread was cranberry almond ciabatta, which frankly I thought was going too far.  The bread was so heavy and plentiful that it was in some in some danger of overwhelming the contents of the sandwich.  It also tasted like desert.  But this is the great thing about the sandwich; if you think you’ve got too much bread, you just leave some of it.  Still I was very glad a had a glass of Hurricane Kitty to wash it down.  It's a local brew, made in Kingston, New York. 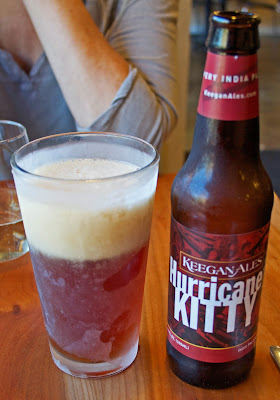 But the most extraordinary sandwich I had in New York was at the Grand Central Oyster Bar.  Now, again, nobody goes to the Oyster Bar for the sandwiches.  And like everybody else I was there for the Montauk points, the Yakutats, the Fanny Bays, and the Naked Cowboys, among others.  But when you see a bouillabaisse sandwich (yes really) calling to you from the menu, you have to answer the call. 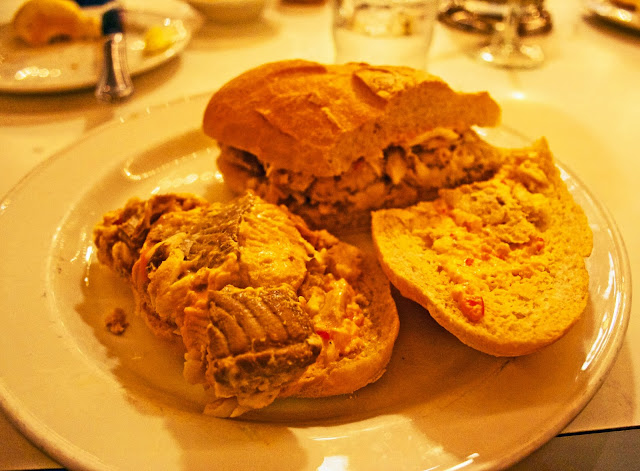 As far as I can see, they must have a pot of bouillabaisse simmering gently in the kitchen, and when somebody orders the sandwich they just slap a ladle (or perhaps a slatted spoon) full onto a roll.  It was strange and strangely wonderful.  A soup sandwich.  And again you could argue there was too much bread but you actually needed a fair lump of the stuff to soak up the liquid. 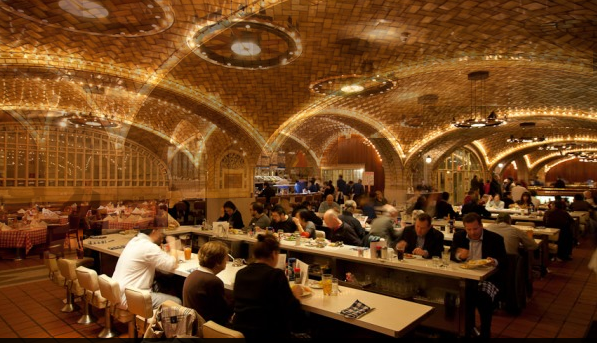 It’s a funny old place, is the Grand Central Oyster Bar – it’s on all the tourist routes yet it’s not in the least bit tourist-friendly.  There are surly, harassed, servers, a great amount of noise, you probably have to sit shoulder to shoulder with strangers at one of the long, free-standing “bars.”  The place is confusing and chaotic, and it’s not cheap.  You see tourists wandering in, looking around, failing to find a friendly welcoming face, or even a way of understanding what’s going on, and then they wander out again.  Of course, once you get the hang of it, this is the very reason why you love it.  It’s serious and uncompromising, not for wimps: very, very New York.   Also, since it’s built in a vault I always get the feeling that even if a nuclear bomb went off at street level you’d be pretty safe down there in the restaurant, at least until the oysters and the Pinot Grigio ran out. 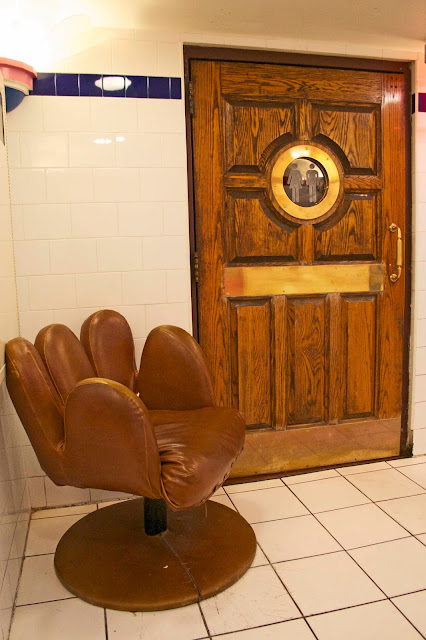 The place also has some very cool toilets (above).  This is the waiting area, a vestibule actually within the toilet, a place where a man might sit for whatever reason, though if you try (like I did) to take a photograph, you do get some very funny looks.  But what the hell, this is New York: I’ll do what I like.
Posted by GeoffNIcholson at 5:40 PM No comments: