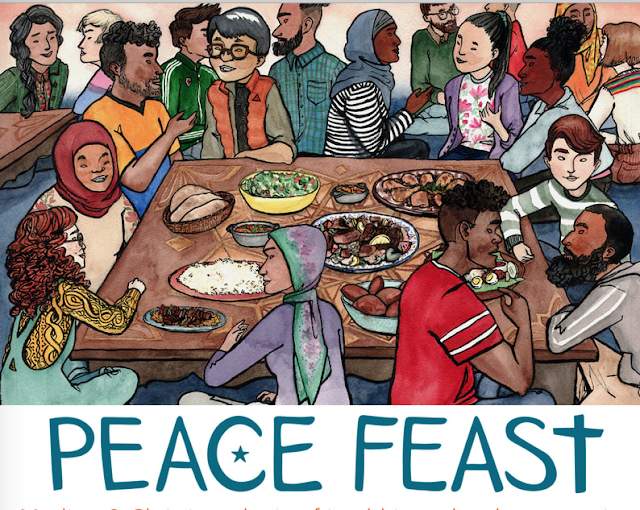 Did you see the headline in the Times, ‘Diet of meat left Crusaders fit for battle’?

Below it there was a short item about research by Gleb Zilberstein, described as an Israeli scientist, which claims that when the Crusaders took on the Muslims, attempting to reclaim Jerusalem in the 12thcentury, they had an advantage because of their diet. This is ‘proved,’ according to the research, by the presence of Crusader food fragments that have been found on ancient pottery. 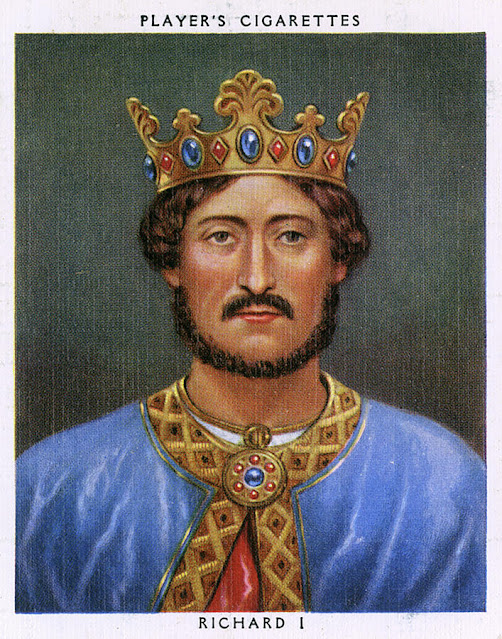 By this theory, the Crusaders, under Richard the Lionheart, ate mostly lamb, pork and cheese with very few carbs.  The Muslim armies, led by Saladin, ate mostly carbs, fruit and veg.  According to Zilberstein’s researches, this made the Crusaders slimmer and more ‘cardio’ than the Muslims, which is an explanation for why, according to some accounts, Saladin lost ten soldiers to every one of Richard’s. 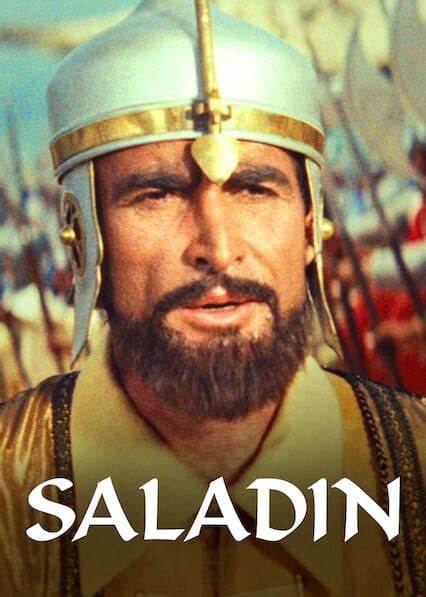 This seems rather a grand theory to be based on a few food traces on ancient pottery, though I don’t doubt it pays to be a thin soldier rather than a fat one. 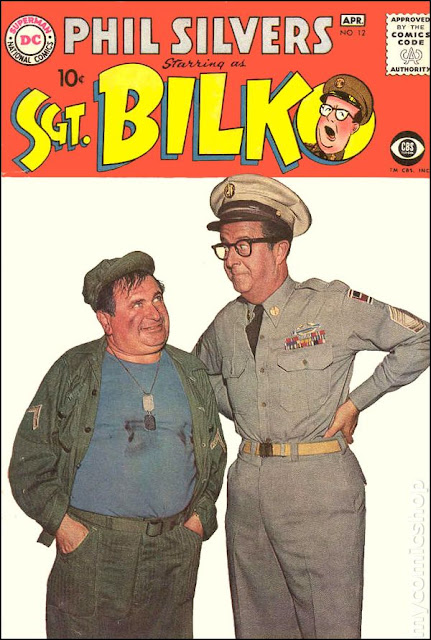 But a little of my own research reveals that in Sahih Bukhari - the collection of sayings and deeds of the Prophet Mohammad (pubh) - the Prophet is reported to have said, ‘The best of the people are those living in my generation, then those who will follow the latter and then those who come after them. Then there will come after them people who will be treacherous and will not be trustworthy, they will bear witness without being asked to do so, and they will vow, but will never fulfil their vows, and fatness will appear among them.’

I’ll just leave that there, while I go off for some pork and cheese.

Posted by GeoffNIcholson at 7:13 AM No comments:

Email ThisBlogThis!Share to TwitterShare to FacebookShare to Pinterest
Labels: RICHARD THE LIONHEART., SALADIN

You know, a lot of people say to me, ‘Geoff, where can I eat  lamb heart while staring at a skull?’ And although I’m sure there are many answers to that question, after last weekend, I can say that the café at the Garden Museum, in Lambeth is absolutely fits the bill. 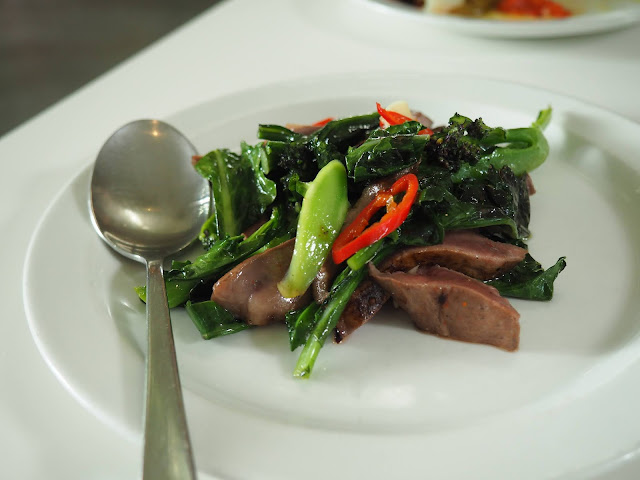 The skull looked like this (and yes I do believe that’s a hydra next to it): 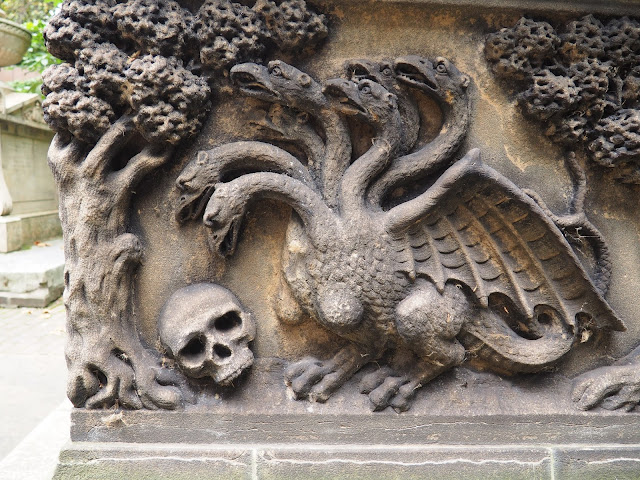 In fact the skull and hydra are on the Tradescant family tomb in the museum’s inner courtyard, aka the Sackler Garden. 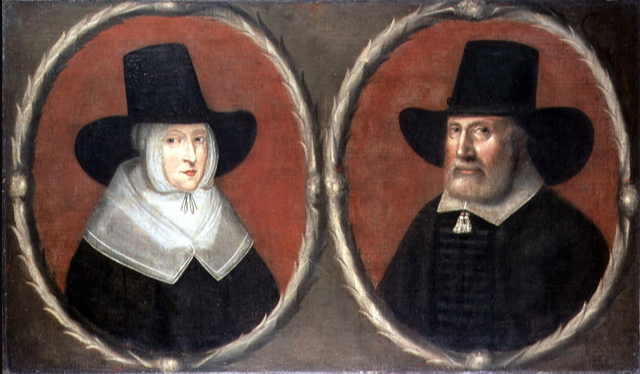 Now, of course, depending on your point of view, the Sackler family may be considered worse than Satan, because of all that OxyContin business.  Families, eh? 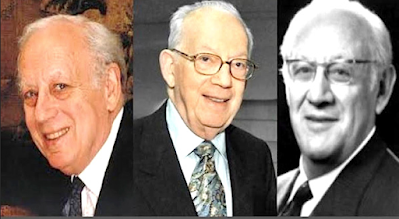 But the garden is doing fine. 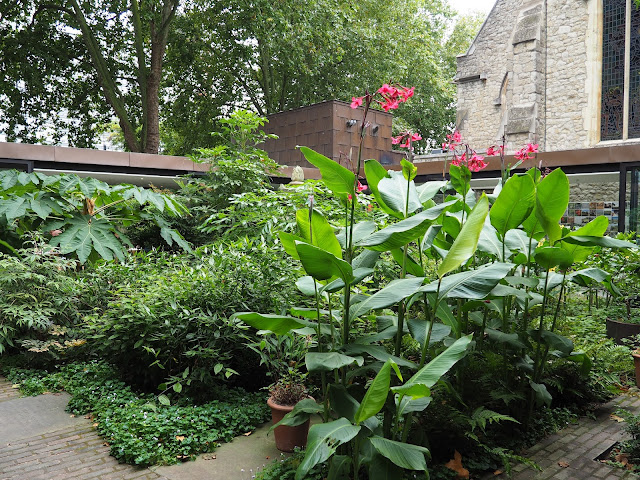 Posted by GeoffNIcholson at 5:34 AM No comments:

THE BULL IS IN THE HEART

As often as not you can tell a book by looking at its cover; that’s kind of the whole

point of a book cover.

We could debate whether this also applies to potato crisp/chip packets.

I mean, could any anything live up to a packet like this? 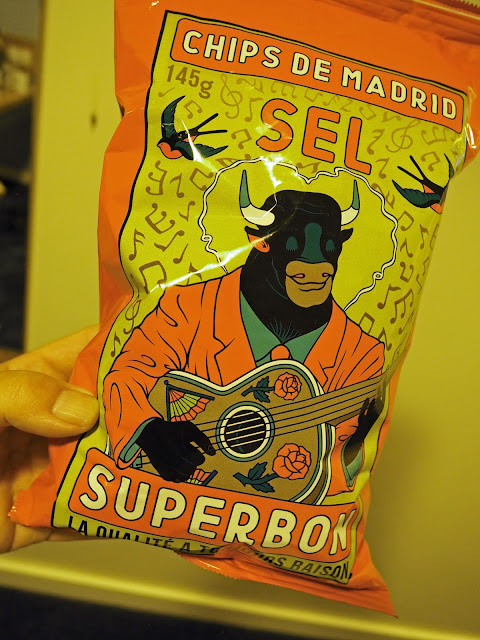 Is it a bull playing a guitar?  Or is it a human guitarist who’s been changed into a bull?  I honestly can’t say, but I do like it.  The crisps inside looked like this: 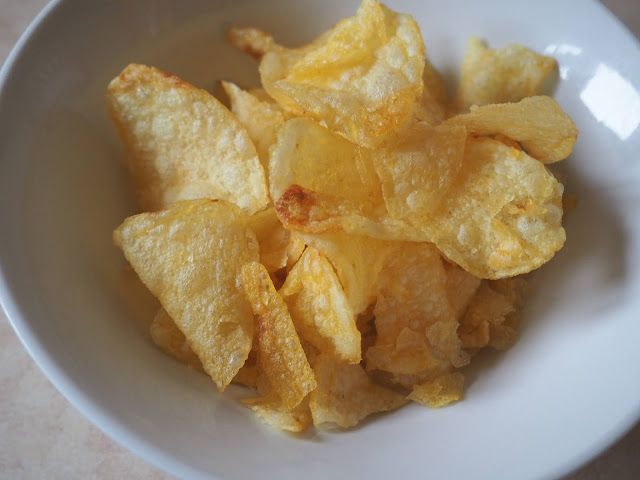 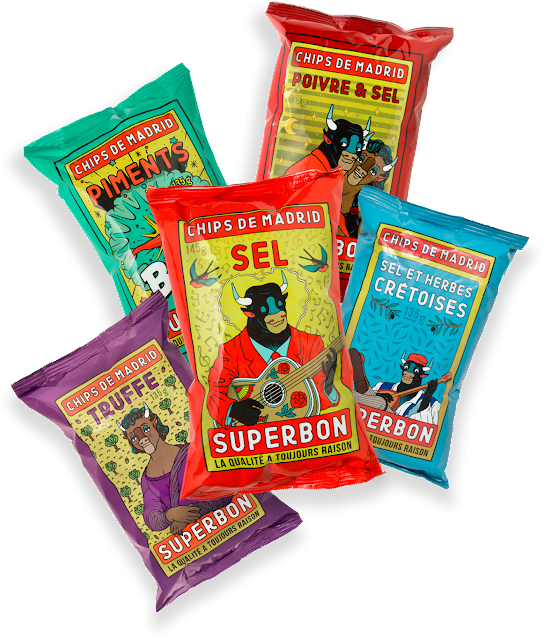 The Superbon website says, ‘Superbon crisps are produced in the Madrid region, home to the beating heart of the crisp world: the Chueca district.’

I didn’t even know the crisp world had a heart.

Posted by GeoffNIcholson at 5:39 AM No comments: 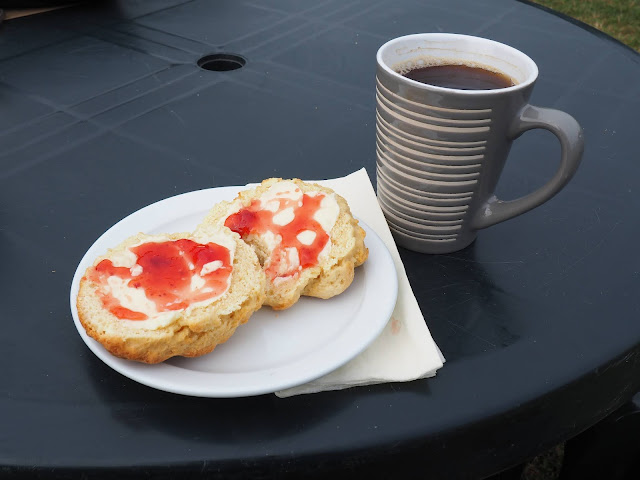 Obviously lots of cafes have toilets but I believe last week I saw what might be world’s only toilet block containing a café, in Cliff Park, Dovercourt, Essex.  From this direction it says pure toilet block 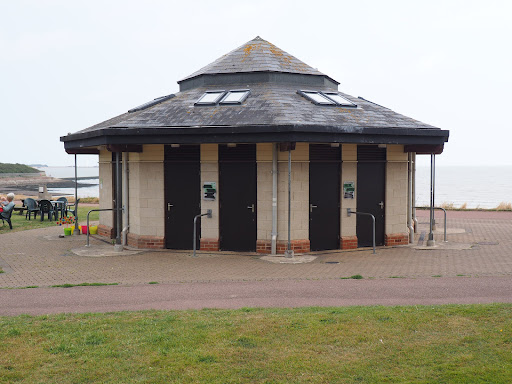 though from the side and front it looks far more like a caff. 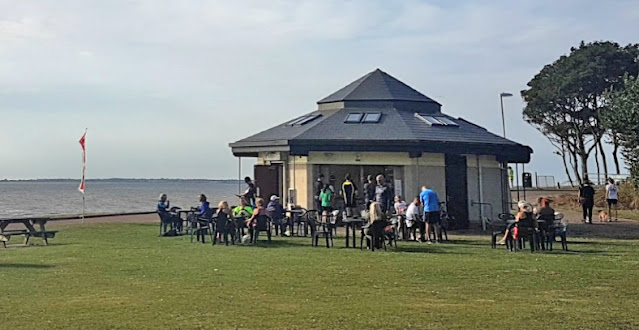 And they serve a damn fine scone with butter and jam, seen at the top of this post.

We were in Dovercourt to see a (let’s say) modest exhibition called ‘William Friese-Greene and the Birth of Cinema,’ at the Harwich Arts and Heritage Centre which is located in the Mayflower Primary School. 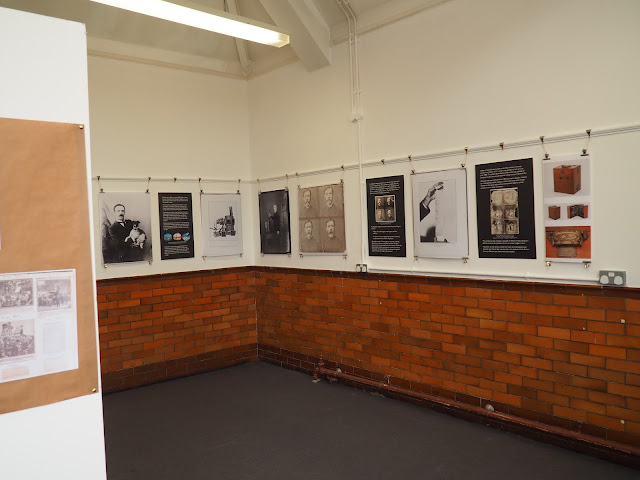 Friese-Greene was an inventor, who owned all kinds of patents, chiefly relating to motion pictures, though he also had a colour film process.

Like many an inventor he had good years and bad years, fortunes came and went, and at one point he left the fleshpots of London for the seaside calm of Dovercourt, quite a posh place at the time.  This is him: This is him as played by Robert Donat in the film The Magic Box. 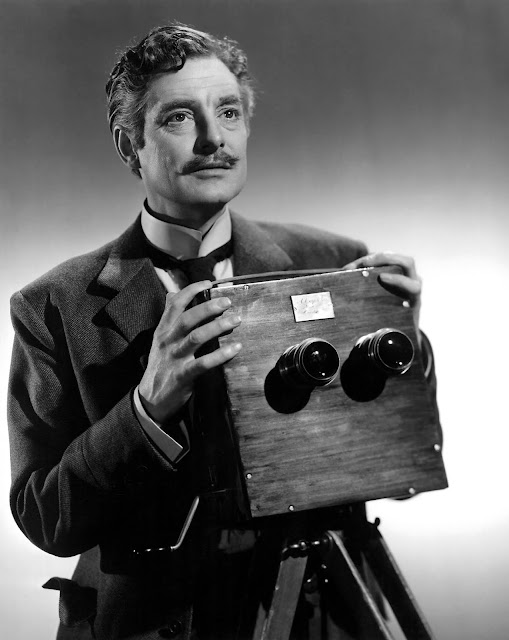 This is me pointing at a picture in the exhibition of one of his inventions: 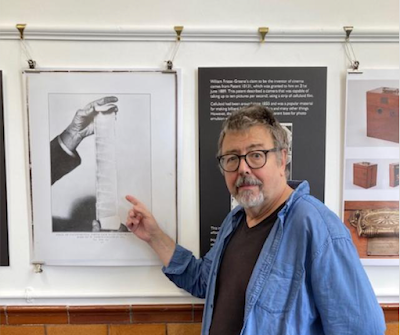 The  Arts and Heritage Centre was selling some themed beer ‘Friese-Greene – Inventive Steps,’ created by the Harwich Town Brewing Company. I believe this was the first time I’ve ever bought beer in a school, but I had to take it home it drink it. You can see the same thing on the label that I’m pointing at in the exhibition. 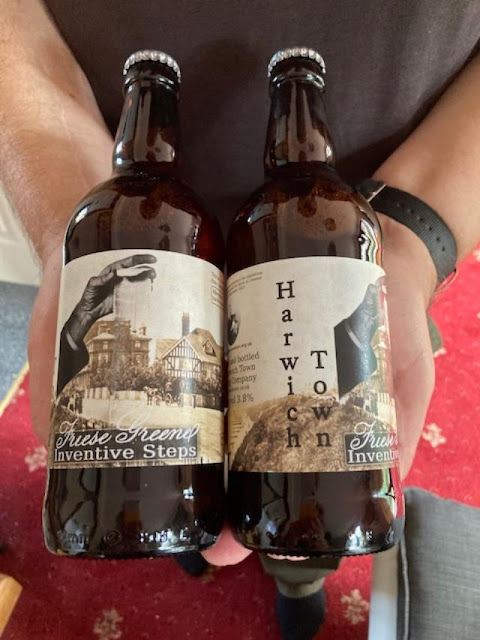 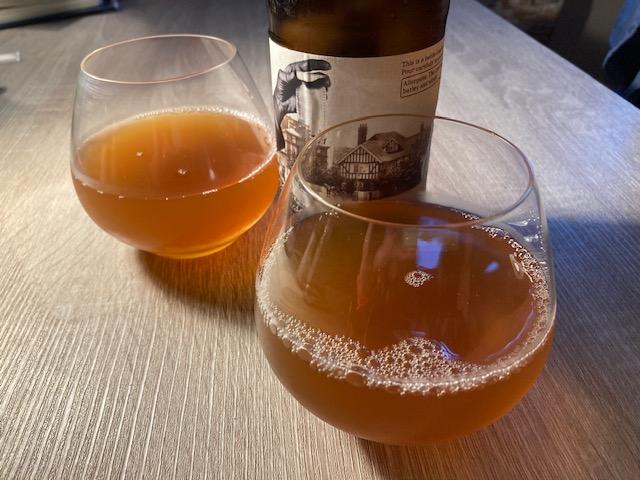 It tasted as good as it looks.

Posted by GeoffNIcholson at 8:19 AM No comments: