AND SPEAKING OF CHEESE 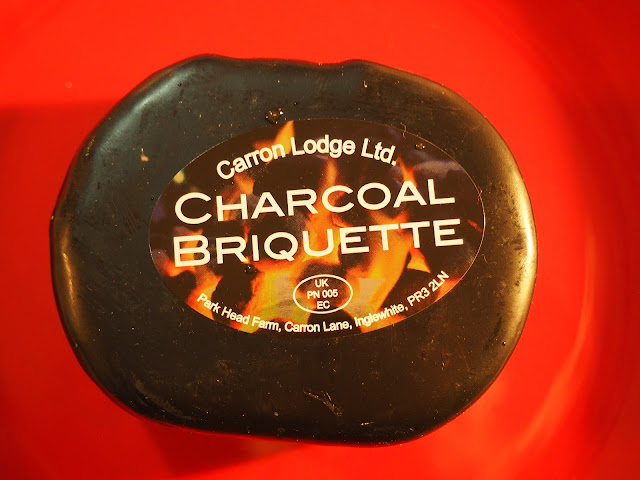 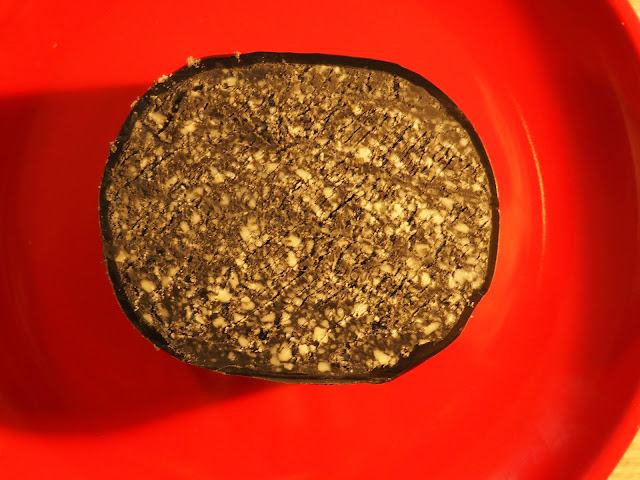 When my friend and food editor Carolyn Hart was pregnant with her daughter, she developed a craving for clementines, so when the baby arrived she named her Clementine.

When my Aunty Kath was pregnant with her son, my cousin, she took to eating coal.  I thought it would have been good if she'd called her son Cole (as in Porter) but in fact she called him Michael.

Posted by GeoffNIcholson at 1:56 AM No comments:

THE BELLS ARE RINGING 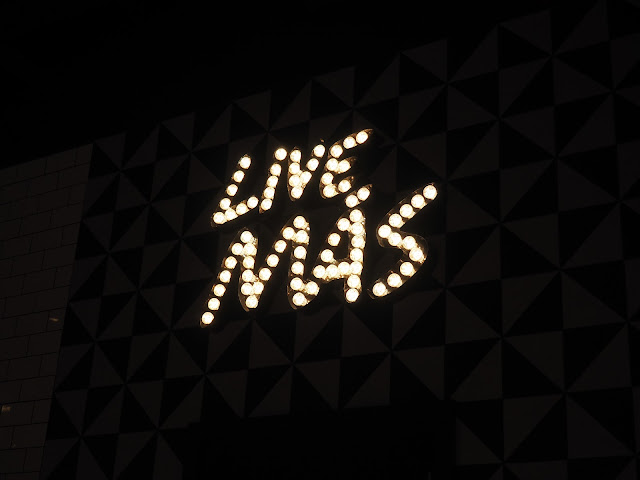 When I was a young man, I crossed the Americas on foot.  By which I mean

I had read and half-digested a lot (arguable too much) of Jack Kerouac’s work.  And although I had no Neal Cassady in my life, at least there was no Allen Ginsburg either.

This is Jack Kerouac in a diner in New York in the 1950s. 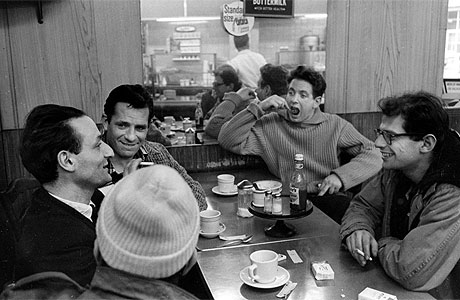 Anyway the point of my story is that the final lift, the one that got me to Santa Barbara was with a very slightly older woman who said, ‘I’ll take you out for dinner tomorrow evening.’  I thought I had arrived in California heaven.

Next night she took me to eat at a Taco Bell.  This is a Taco Bell in Santa Barbara but it almost certainly isn’t the one we went to. 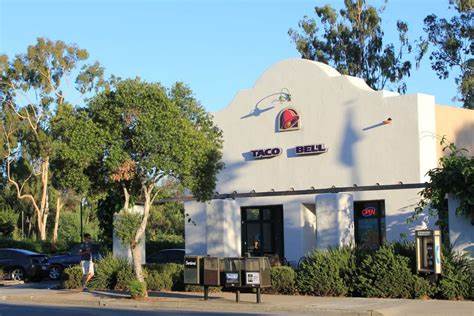 Now, I was not a exactly a food sophisticate at that time but I was sophisticated enough to realize that a meal at a Taco Bell was not exactly ‘going out for dinner.’

Even so I enjoyed myself – I’d never had Mexican food before and I thought it was great.  I seem to recall it was the refried beans that I liked best of all.

Well the years pass, and I was in Gloucester last weekend and imagine the thrill of discovering that Gloucester has a Taco Bell.  So obviously we went. 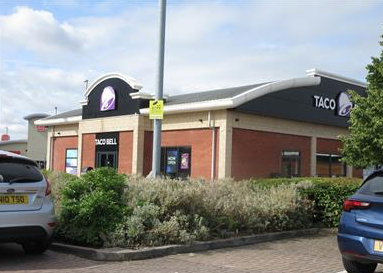 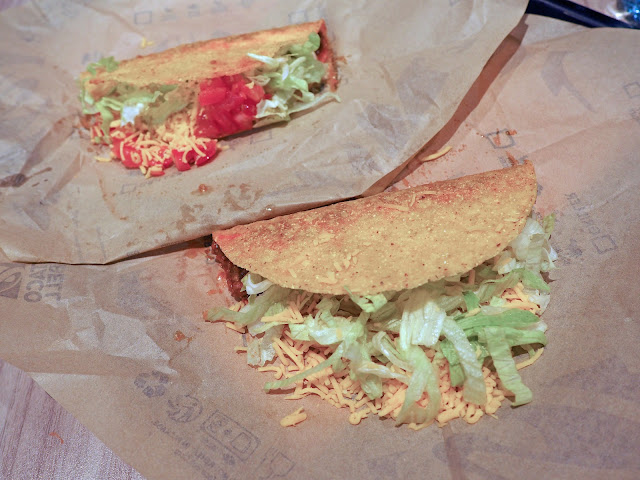 Still, I’m glad we went - they did have this very fancy sign above the door to the unisex toilet. 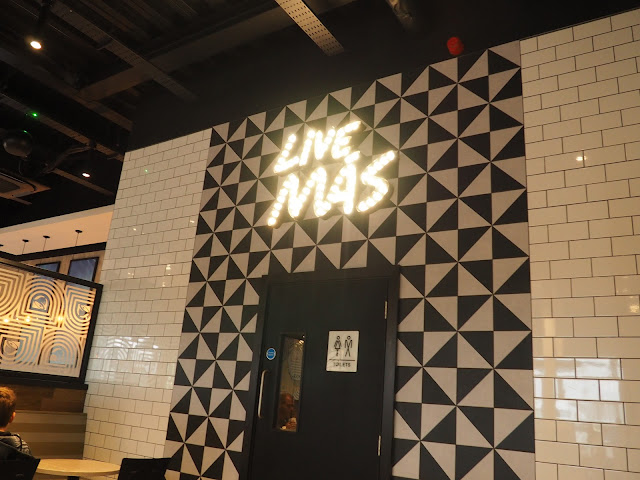 Posted by GeoffNIcholson at 9:46 AM No comments:

I had an idea, possibly even a concept, though I admit it wasn’t the greatest or most

original concept and I’m sure it’s been done before, but the plan was that I’d eat my

way through the entire cheese alphabet. 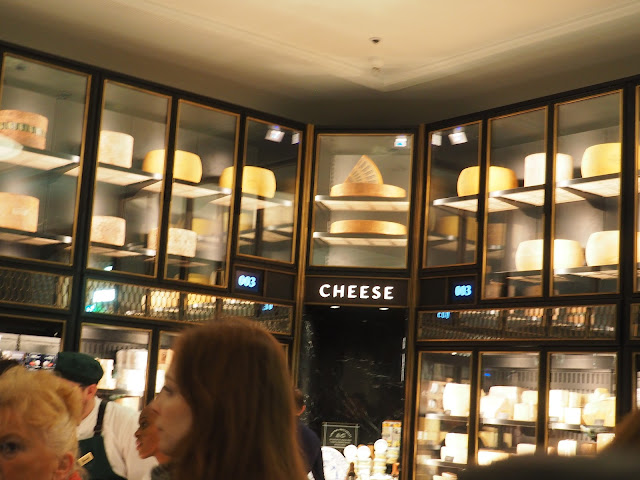 I might start with Abbamar, a Sardinian semi-soft cheese made cows’ and sheep's milk and go all the way to Zighera,a smoked cheese made in the mountains of Pinetano, and along the way I’d hope to eat some Xynomizithra, a Greek, specifically Cretan, whey cheese made from ewe and/or goat milk.

The obvious problem was where I’d actually obtain these cheeses without going to Sardinia, the mountains of Pinetano or Crete. I thought ‘International Cheese,’ the shop in Liverpool Street station, might be some help – their slogan is ‘tired of cheese, tired of life’ - but it probably wouldn’t be the complete solution.

I could also see certain problems with names and alphabetization.  Here for example is Westminster cheese, which is pretty good, though as it says on the pack it’s actually a smoked cheddar. 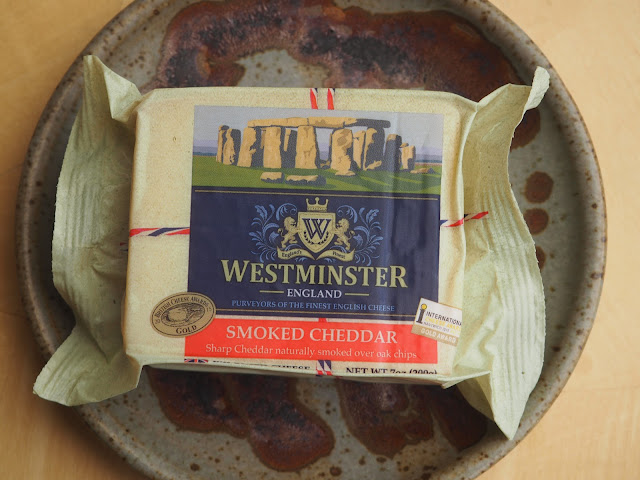 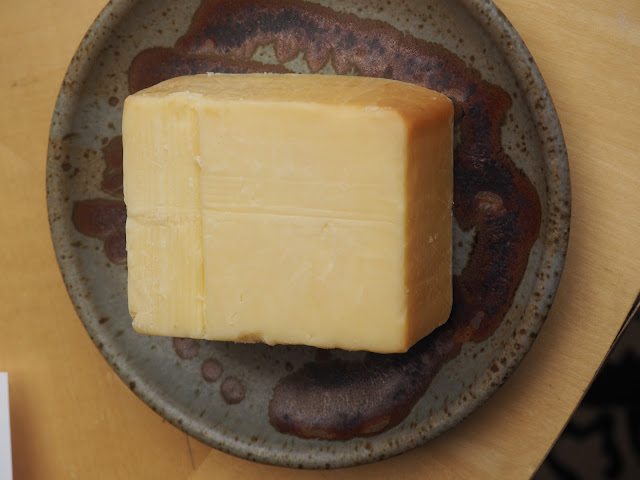 So would I file that under W or C, or conceivably S?

As for Red Windsor, that could be R or W, but again it's a cheddar before being laced with Bordeaux or sometimes port or brandy, so perhaps it also should be under C. 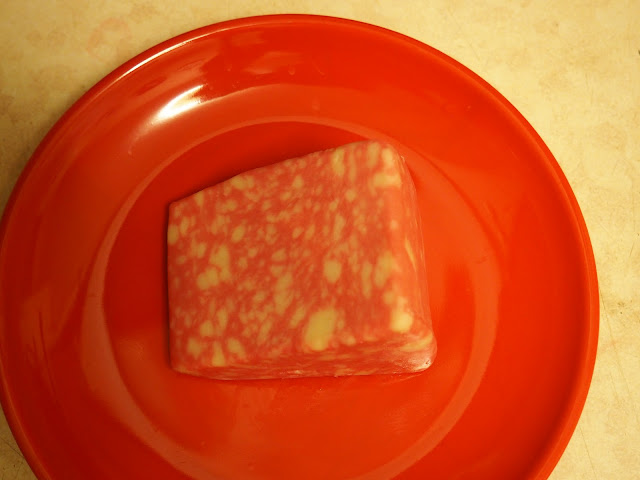 I like these cheeses very much but the conceptual purity of my project was looking a bit thin.

So I decided I’d just go with whatever weird and wonderful cheese I happened to find, and of course whatever it was, it would fit into the alphabet somewhere.

Here for example here is what appears to be called ‘It’s Cream Cheese’ – but containing Marmite.  File under I? 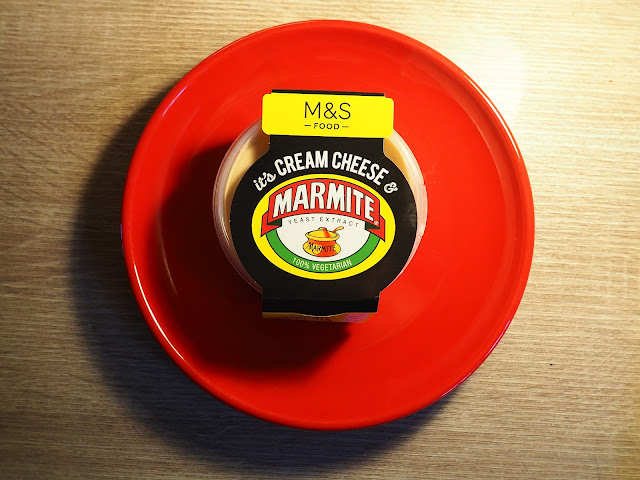 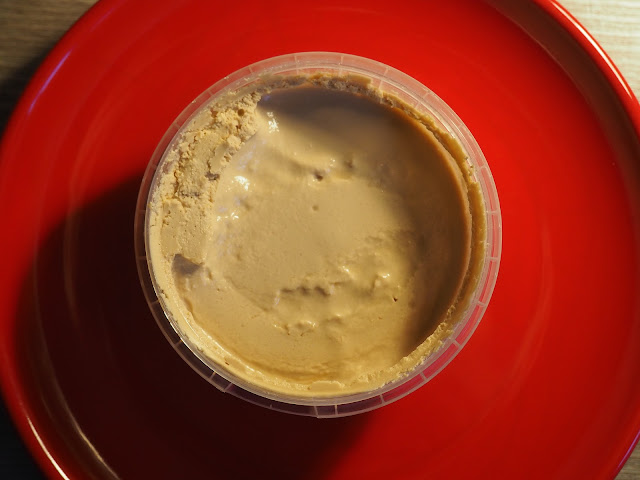 This is a Marks and Sparks version but it’s sold elsewhere. The most interesting thing about it is that it tastes EXACTLY the way you’d imagine it would – simultaneously and equally of both Marmite and cream cheese.  If this is the kind of thing you like, you’ll like this a lot, though the label says it contains ‘vegetable juice extract’ without specifying the vegetable, which I thought was a bit dubious.

And then in the nearby Asda I found this thing, Castello Taste Hawaii. File Under C, T or H? The pack says, ‘Tropical, fruity, crunchy & deliciously smooth cream cheese.’ 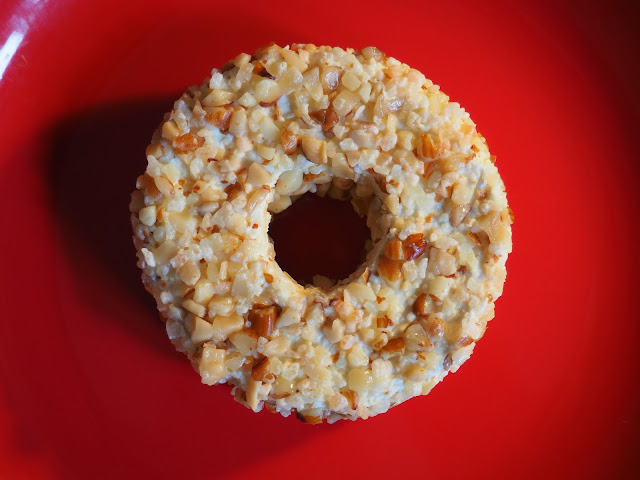 Yes, it’s got pineapple and almonds in it which sounds OK but it also contains ‘candied papaya’ which I thought was an abomination.  And you know, you might think it would taste like a dessert, like a cheesecake, but it doesn’t.

My thoughts turned to the joys of Leagram Organic Bob’s Knobs, actually a kind of Lancashire I had some years back. 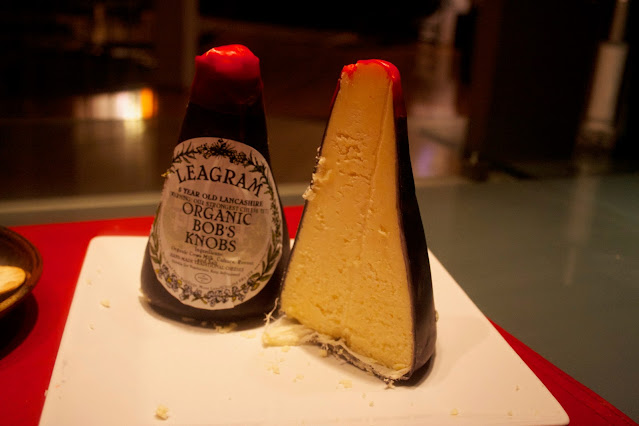 I can only imagine where that ought to fit in the alphabetical scheme of things.  But I’m not losing sleep over it.  Sometimes you just have to shut up and eat yer cheese.

Posted by GeoffNIcholson at 9:36 AM No comments:

IN KOHL BLOOD (KOHL, OF COURSE, BEING GERMAN FOR CABBAGE)

I was leafing through my copy of Alan Davidson’s Oxford Companion to Food when out fell an ancient cutting I’d put in there from the Times (30 September 1995 in case you want to research it) headlined ‘Kohl Treating Chum Major to Blood Sausage Ritual.’  Keep a clean mind there at the back. 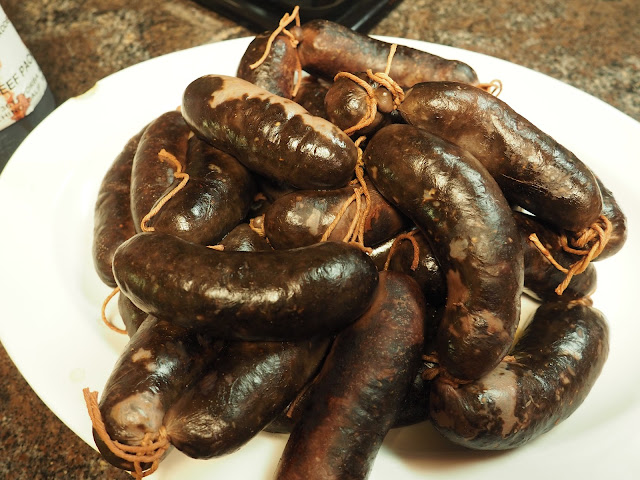 The story was that Kohl, a keen amateur chef, was going to serve Major a seven course dinner, including ‘potato ravioli filled with blood and liver sausage … quickly followed by a carpaccio of pig’s stomach and blood sausage.’

It would work for me.  And the Times said it had also worked for Gorbachev, Yeltsin and Brian Mulroney, the Canadian Prime Minister, who'd been served similar meals.  I haven't been able to find a picture of Kohl and Major at table, though there is this: 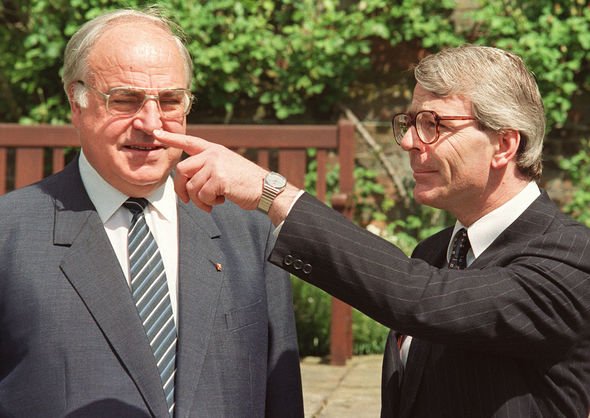 Anyway this led to me buying a copy of A Culinary Voyage Through Germany.  The attributed to Hennelore Kohl, General Editor, with Commentary by her husband Helmut Kohl, though the introduction says it is Hannelore’s ‘recipe book.’ 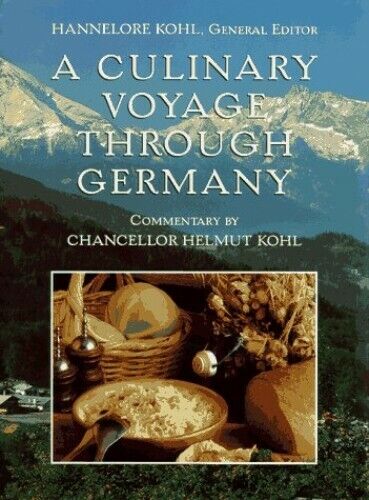 This is Hannelore and Helmut at table: 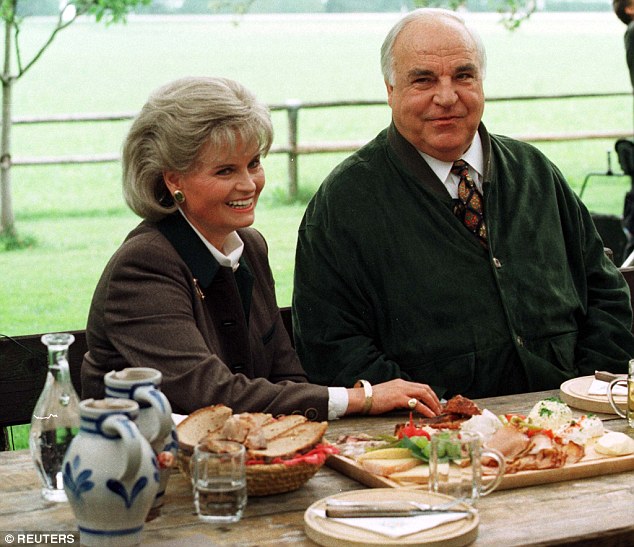 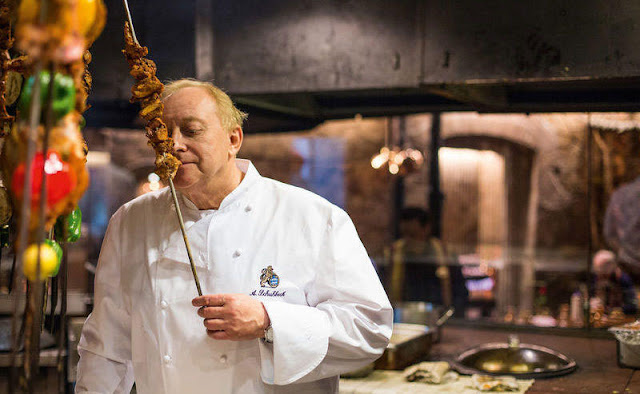 One of the conversations is about bread and walking.  Hannelore says, ‘My husband and I are enthusiastic hikers.  Hiking and sandwiches go together so well, don’t they?’

And Alfons replies, ‘Yes, because after an exhausting hike the body primarily needs the carbohydrates from starch, and it can obtain these most easily from bread and rolls.  If you were to eat a huge pork roast during your hike, you wouldn’t feel like walking anymore; instead you’d want a bench to sit down on to have forty winks. Big meals tend to make people lethargic, while bread on the other hand, makes them bright and lively.’

I wonder if this has lost something in the translation.  I also wonder how you would eat ‘a huge roast pork’ during a hike.  The logistics seem tricky.  It would be worth a try though, I think.

Posted by GeoffNIcholson at 8:11 AM No comments: