WHAT HAVE I BECOME?

I was in Cartons, a café in the Broadway, Stanmore: nice place, friendly staff, a long menu featuring multiple variations on eggs Benedict, copies of the Jewish News (‘Your free weekly of the year’) lying around if you need one to help pass the time.

I had the Sausage, Bacon and Cheese Panini, so obviously Cartons doesn’t cater solely for a Jewish clientele.  It looked like this with, as you see, a little garnish of salad: 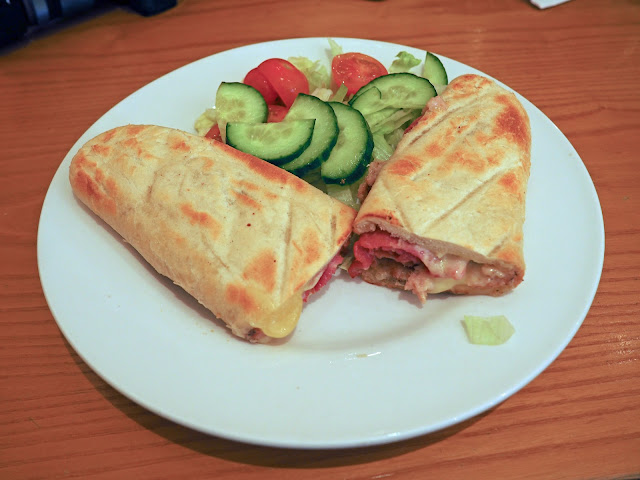 And after the waitress had set down the plate she asked me if I wanted any dressing and I said what kind do you have.? And she replied or anyway I thought she replied, French, mayonnaise or sour cream.

And I thought how nice it would be to have a little sour cream dressing with the salad and sandwich so I asked for that, or thought I did, and the waitress brought over this: 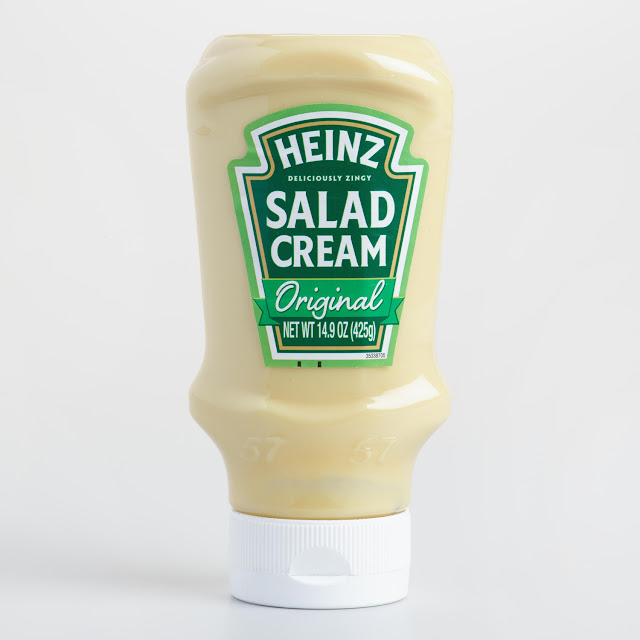 She had said Salad Cream.  I had heard sour cream.

No such problem at Rio’s Coffee Lounge, Walthamstow.  What you see here is one tuna panini, one chicken and avocado panini (shared).  No salad. Salad always complicates everything. 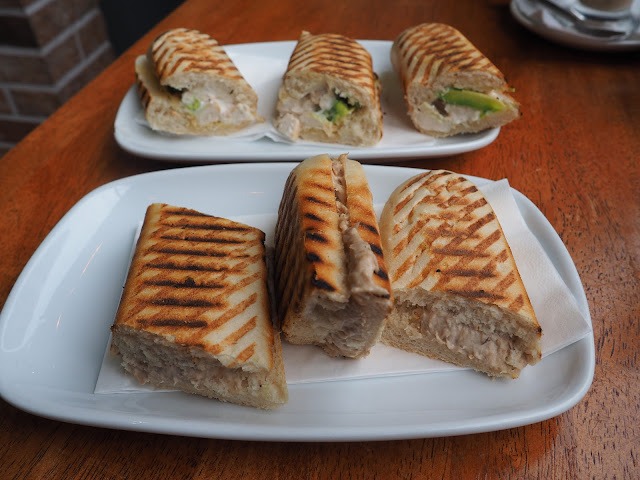 Posted by GeoffNIcholson at 11:15 AM No comments: 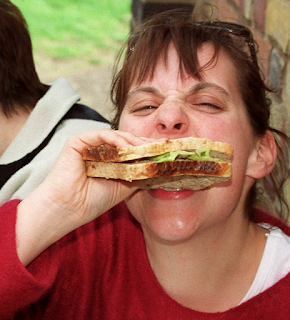 I never really used to read A.A. Gill when he was restaurant critic of the Sunday Times, though of course I devoured his famous Vanity Fair takedown of the Parisian restaurant L’Ami Louis, part of which ran like this:

‘Nothing I have eaten or heard of being eaten here prepared me for the arrival of the veal kidneys en brochette. Somehow the heat had welded them together into a gray, suppurating renal brick. It could be the result of an accident involving rat babies in a nuclear reactor. They don’t taste as nice as they sound. 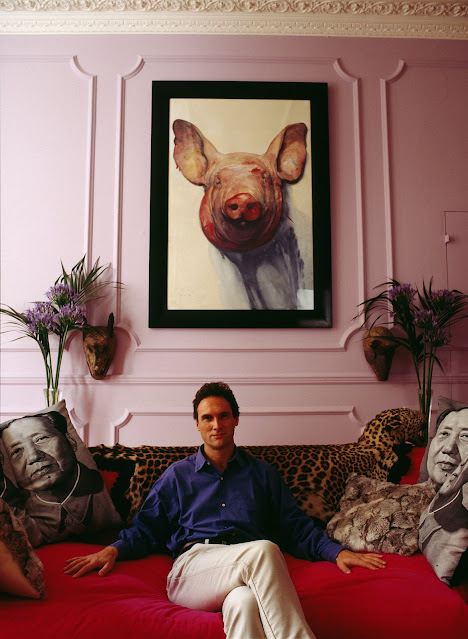 Pictures like the one above have always suggested that he and I wouldn’t be best buddies, but I’ve been reading his collection Talk Table and I think it’s pretty good.  In an article titled ‘Picnic’ he writes, ‘Sandwiches were made for the big outdoors; whatever you do, don’t get cute with them.  Don’t stuff them with mountains of esoteric gear.  Peanut butter on Wonderloaf is far nicer than aubergine kumquat and herring on focaccia.  Sandwiches are engineering not cooking; they must have stickablity, or when you unpack them they’ll look like a badly held bridge hand.’

I don’t actually know what a badly held bridge hand looks like but I’m on board with the rest of what he says. 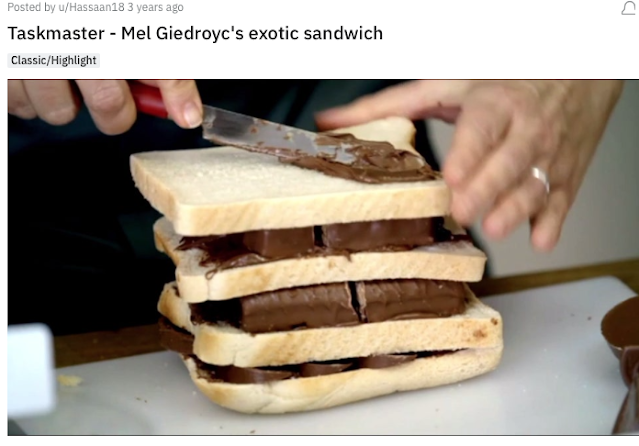 How different from the episode of the TV show Taskmaster in which contestants were told to make an ‘exotic sandwich.’  Now I don’t give a hoot about Taskmaster but I am quite fond of Mel Giedroyc who was one of the contestants, and she made (I’m quoting) ‘a sweet multi-layered sandwich out of white bread, Turkish delight, Crunchie bars, KitKats, Double Deckers, Chocolate Oranges, M&Ms, chocolate spread, Maltesers, Twix, Snickers, chocolate eggs and marshmallows.’ 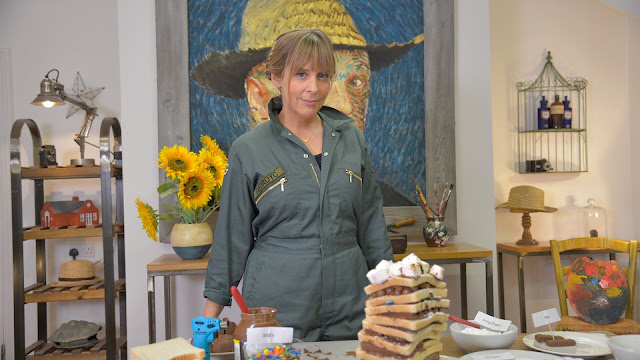 Now we all know this is just junk TV and who can be bothered to rail against it but the obvious objection is that there’s nothing remotely exotic about any of those ingredients.  And the end result looked terrible, perhaps even like a badly held bridge hand.

Young Giedroyc is still ok by me, however. 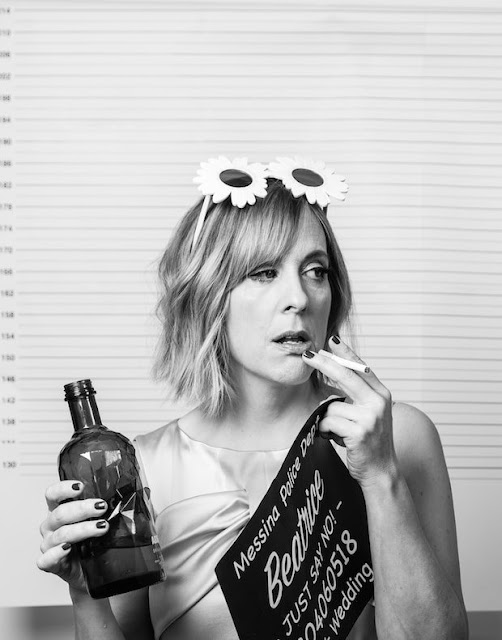 Posted by GeoffNIcholson at 3:46 AM No comments:

‘… wouldn’t it be lovely to be free of self for a little while - at least consciousness of self, I mean.  For ever - just to be a beautiful mind growing from outward impressions,  I think self-consciousness is like gin – it stops the growth!” 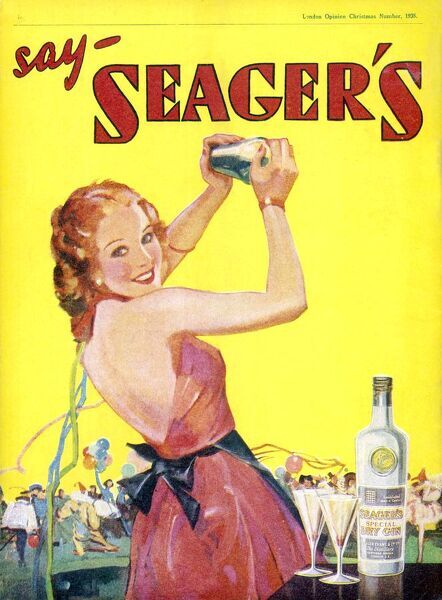 Does self-consciousness stop the growth?  I had no idea.

As for gin … more research may be required. 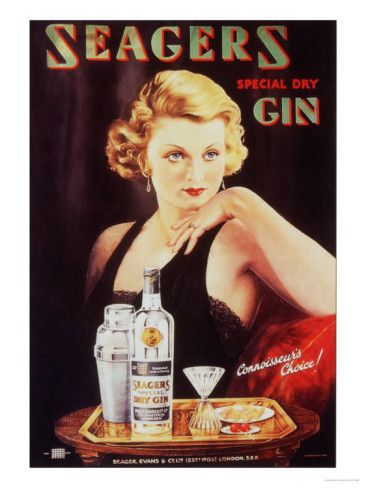 Posted by GeoffNIcholson at 8:42 AM No comments:

Email ThisBlogThis!Share to TwitterShare to FacebookShare to Pinterest
Labels: gin

THE (PICKWICK) CLUB SANDWICH, KIND OF

Over the New Year we were in Ipswich for an afternoon and had a sandwich at Pickwicks Coffee and Tea House. 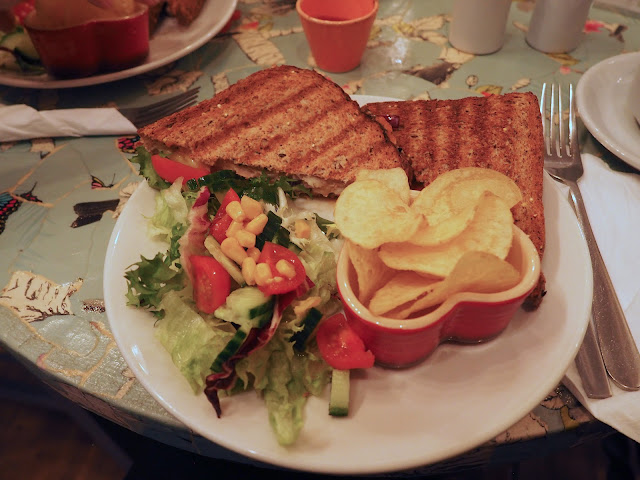 What you see above is two half shared sandwiches, one a tuna melt, one a cheese and chorizo.  On the day, at that hour, they hit the spot. 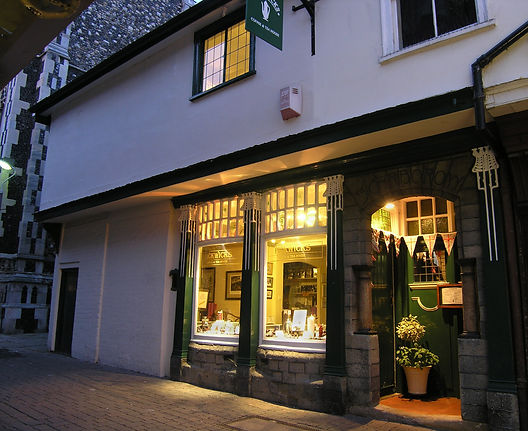 You know I haven’t read so very much Dickens, (as a boy I was alienated by worthy BBC tv adpatations) but somehow we all know that The Pickwick Papers is a jolly, rollicking and full of food. 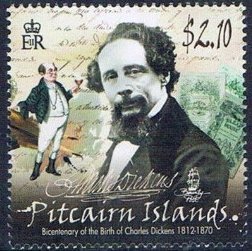 The word sandwich or sandwiches appears 8 times in finished text. There’s no mention of tuna or chorizo, though there is a reference to German sausage. The best cluster of sandwich mentions is this one, as Mr Pickwick boards a coach.

‘I am ruminating,’ said Mr. Pickwick, ‘on the strange mutability of human affairs.’

Well, it’s something we all do once in a while, sometimes over a sandwich. 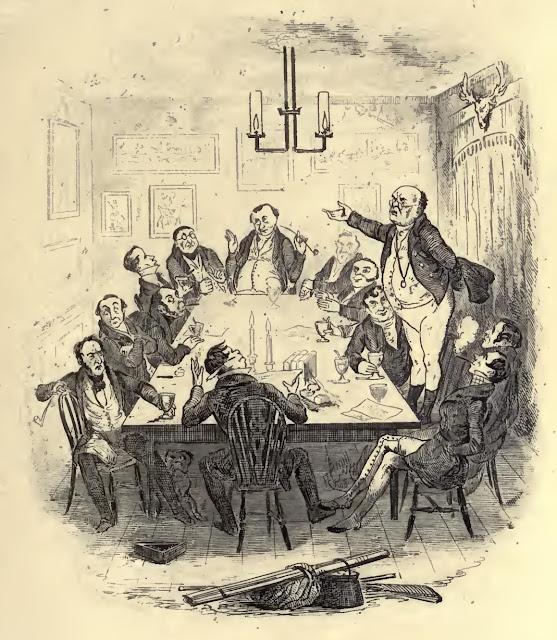 Posted by GeoffNIcholson at 9:29 AM No comments:

JOSE CUERVO - HE'S BARELY A NODDING ACQUAINTANCE OF MINE 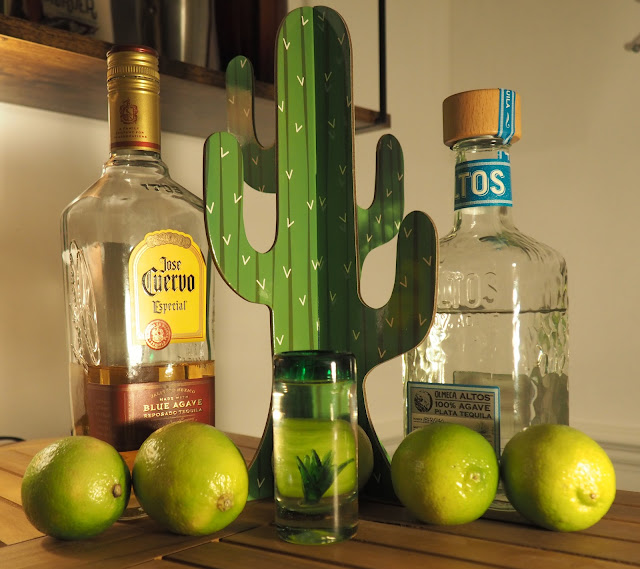 Well, we’ve made it to the New Year and supplies of tequila are adequate for at least a while.  I realize the above photograph makes it look as though I was drinking alone.  In fact I wasn’t but I only had the one genuine Mexican tequila shot glass with the agave moulded into the base, so that has to do for the picture.

And frankly I don’t suppose Anjelica Huston was really drinking alone in this advertising picture: 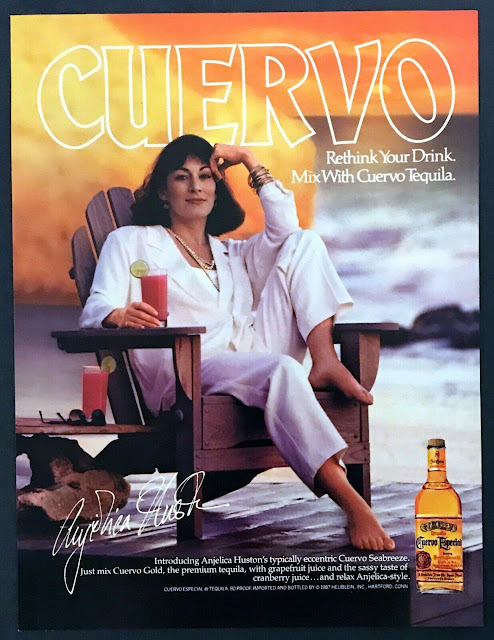 Nor Joan Collins in this one: 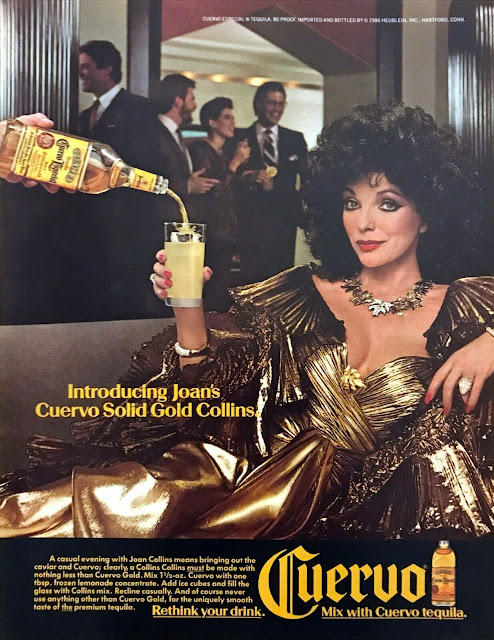 Given that, according to the advertising copy, Joan mixes frozen lemonade concentrate with her tequila and eats it with caviar, she probably didn’t deserve to get much company.  But I bet she did.

Posted by GeoffNIcholson at 12:22 PM No comments:

An article in the Guardian by Michael Pollan about (briefly) giving up caffein. 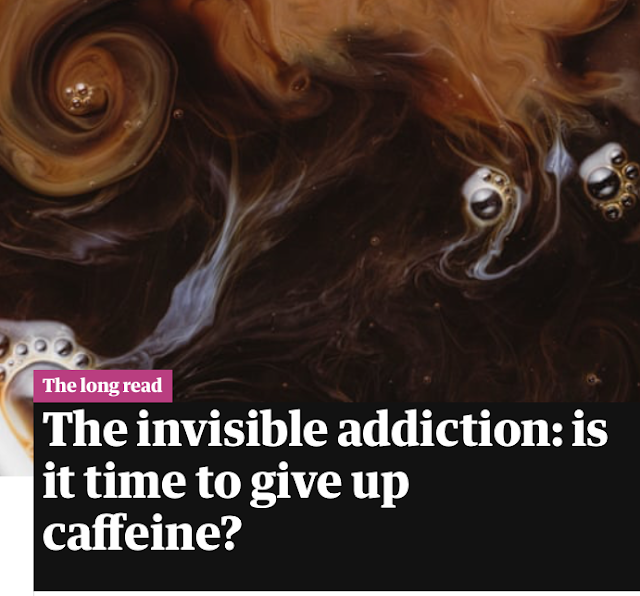 I have a lot of time for Michael Pollan who is a good writer, no doubt he didn't write the headline.

But really, has nobody at the Guardian heard of Betteridge's law of headlines? 'Any headline that ends in a question mark can be answered by the word no.'

Which is exactly what Pollan concludes in the article.

Posted by GeoffNIcholson at 4:11 AM No comments: 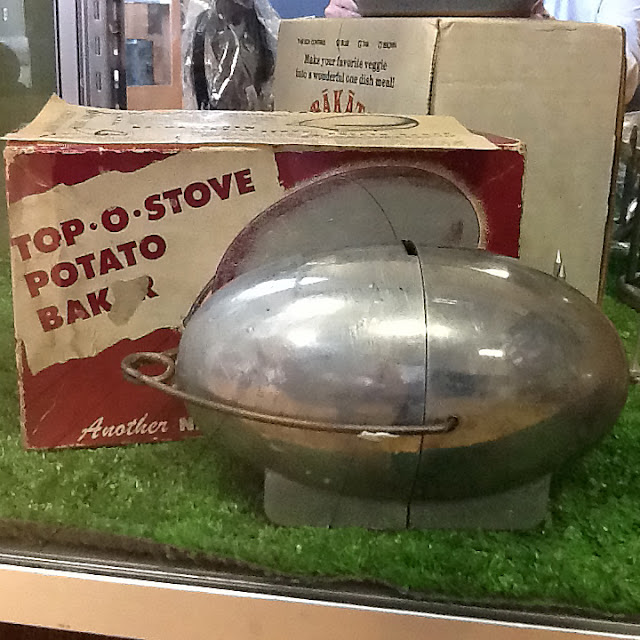 It being the festive season, I was thinking about potatoes and reading Redcliffe Salaman’s majestic The History and Social Influence of the Potato, first published in 1949. 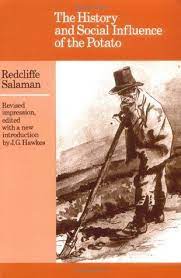 The book’s all good but I especially like this part of the preface, describing the toil that went into the writing.  He says, ‘…there have  not been  wanting  those who  have  regarded these  activities  with a  shake  of the  head  and an  indulgent  smile, indicating  that  nothing, short  of  mental instability,  could  excuse a  lifelong  attachment to  the  study of  so  banal a  subject.’ 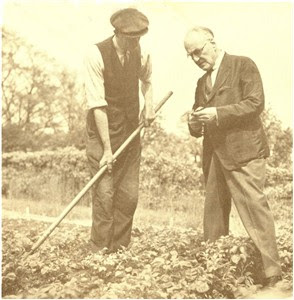 Damn fools.  You’ll get no head shaking from me.  I love this stuff.  I also love this passage from chapter two titled ‘The Archeological Record,’

‘Cieza  de Leon  gives  a remarkable  account  of a scene  observed by a  priest in  May  1547, and  attested by him in  Cieza’s presence.  It relates how  a  great gathering  of  Indians took  place  at the  call  of the  drum  in Lampa in the Collao ...’ There was a parade of richly dressed young boys and girls, ‘Then followed native labourers with plough on shoulder succeeded by six pages, each with a  bag of  potatoes.  After a ceremonial  parade, and the labourers, holding the bags of potatoes high above their heads, had  danced  to the  beating  of the  drums,  there was brought in a one-year-old  llama, “all  of  one colour”, and this was taken to the chief and then killed and its bowels withdrawn and given to the sorcerers.  Then certain Indians collected all the blood they could from the  llama and poured it on the potatoes in the  bags.  Unfortunately, at this critical moment an overzealous catechumen of only a few days standing arrived on the scene and, having denounced them all, dispersed the gathering.’

Well, I’ve never consumed llama blood, though I’ve eaten plenty of black pudding.  I also know there are sources of llama meat, imported from Argentina, but I’m sure it’s not the same as freshly slaughtered entrails. 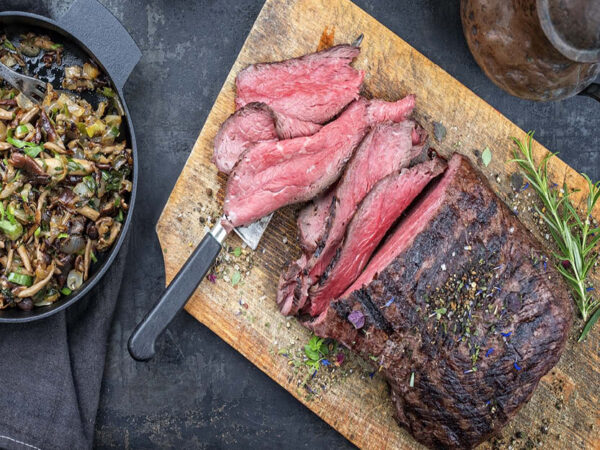 Thoughts of potatoes and strange rituals inevitably make me think of Brian Harvey, of the boy band East 17. 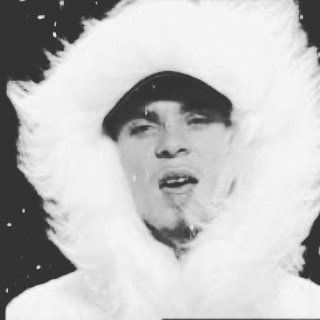 A tragic figure in many ways, he’s the man most famous for eating three baked potatoes and then, at one in the morning, getting in his car to drive over to a pal’s place. However the baked potatoes sat uneasily in his stomach, and he knew he was about to throw up. He opened the car door, so as to vomit outside the car's interior, as anyone might.  However, the car’s motor was still running and the car was in gear, and Brian managed to fall out of the car, which then ran over him.

Brian’s not looking so great these days – it may have nothing to do with potatoes. 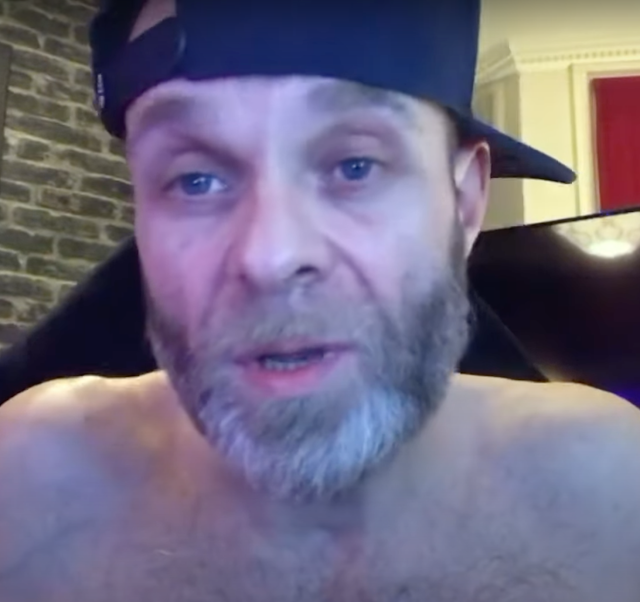 Posted by GeoffNIcholson at 5:39 AM No comments: