Isn’t this fantastic?  Isn’t this what all restaurant bills should look like?  Four simple statements: pig troters (sic), rabbit, duck, bottle of red. Isn’t it also, arguably, what all meals should be like? 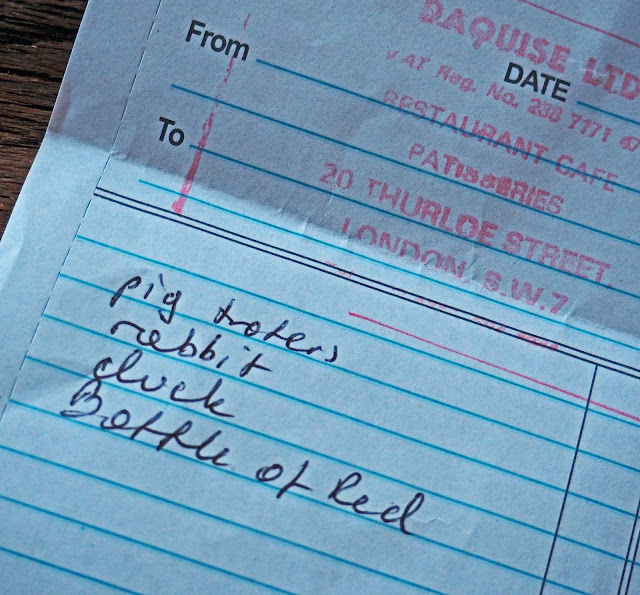 The trotters were in aspic – the blandness of the aspic and the intense porkinesss were a winner, especially since it came with a little jug of vinegar: 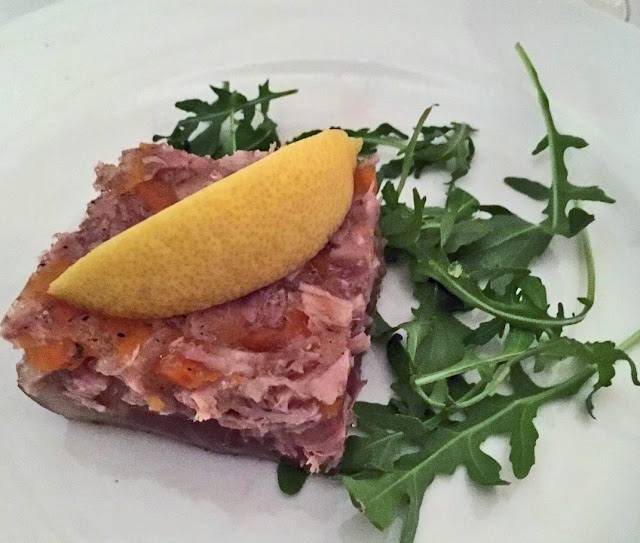 The duck looked like this, it’s stuffed with apples, and you can’t lose with that can you?: 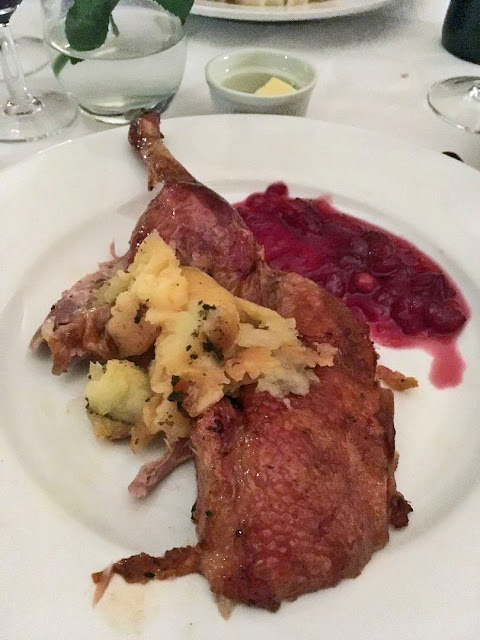 The rabbit was in mustard sauce and was good too, but not very photogenic, and though not as good as the duck, and I did have some food envy.

Below is how the Daquise looked it in 1970 – two doors away from a Wimpy Bar – and it’s survived much longer.  Sometimes (if not all that often) there is justice in the food world. 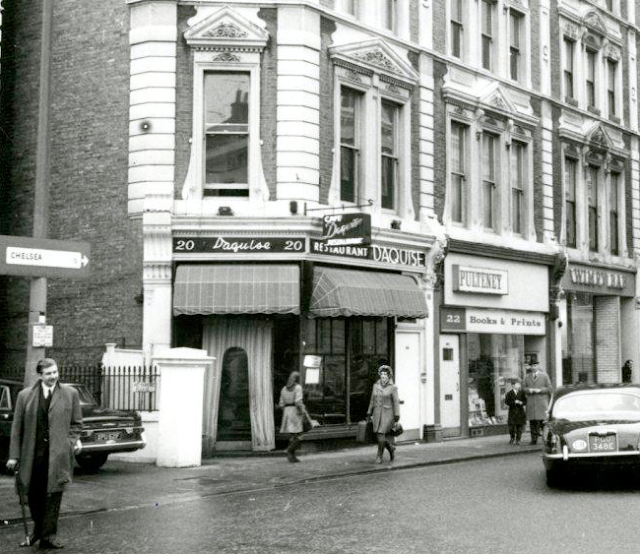 There was, apparently a very serious fire there in 2005 but the place been restored in order to look very much the way it always did – and the menu has been gently updated without making you think it’s getting fancy.  There’s still borscht and black pudding, but I remember I always used to order the stuffed cabbage and that seems to have gone from the menu.

Posted by GeoffNIcholson at 3:39 AM No comments:

Here in London I’ve been eating the inner and outer parts of pigs (I’m not sure that they all constitute organs).

Here at a restaurant named Noble Rot on Lamb’s  Conduit Street, my companion and I ate the set lunch – the starter for which was  pig cheek salad.  Sounds quite humble – but it was an absolute stunner.  Fatty, tart, - and yes, there was greenery too: 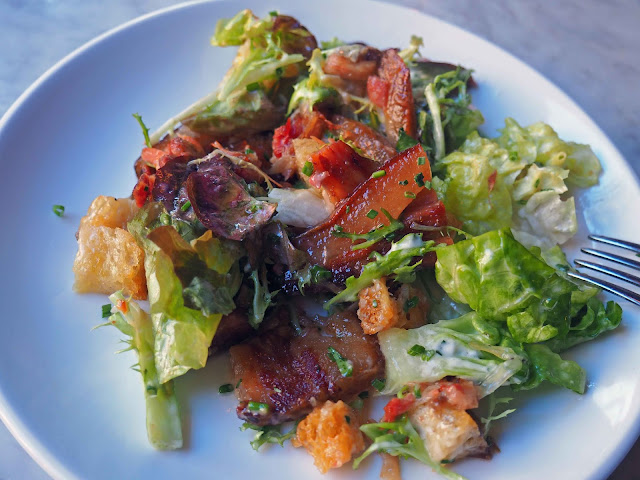 And on the menu at Josephine’s Filipino restaurant on Charlotte Street there was something  described as “deep fried pork flowers served with spicy vingar.”
Now you understand the “bloom” reference. I asked the waiter what that was and he said “pork skin” – so of course I ordered it.  It looked like this: 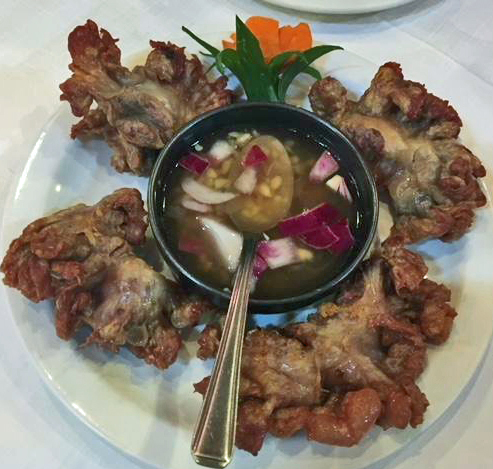 The internet suggests that there’s only one restaurant in the whole world that refers to this dish as pork flowers - and that's Josephine’s.  It’s more usually known as Sitsaron Bulaklak, sometimes referred to as ruffled fat or chitterlings, and more anatomically as pig mesentery.  Now, I perfectly understand the need for euphemism in food, but these are definitely not pork skin.  They were nevertheless really, really good.  Chewy, of course but deep fried so also crunchy.

And at the Punch Tavern in Fleet Street, on a Monday night when the whole area seemed strangely deserted and bleak, there was this serving of pork crackling. 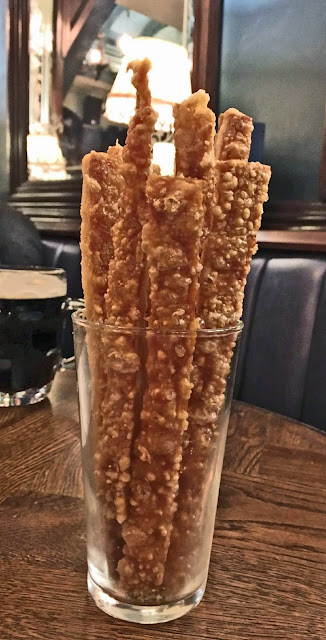 I suppose crackling’s a euphemism too.

Posted by GeoffNIcholson at 3:14 AM No comments:

You’re surely familiar (I mean, I’ve banged on about it often enough) with the great early scene in the movie The Quiller Memorandumin which Alec Guinness (Pol) recruits George Segal (Quiller) for what sounds like a suicide mission.  Guinness toys with sandwiches throughout the scene. The screenplay is by Harold Pinter. 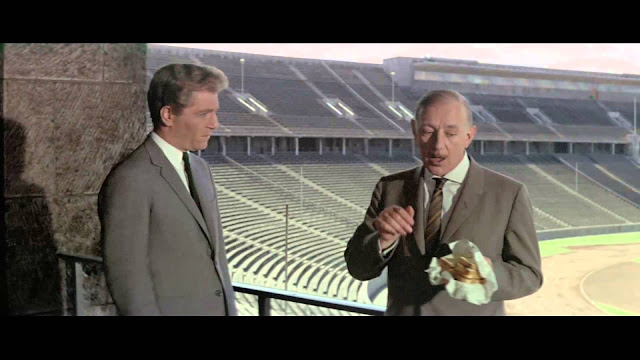 POL bites into his sandwich and grins at QUILLER … He offers the sandwiches to QUILLER.
POL. Some leberwurst ?
QUILLER. No thanks.
POL. Or some schinken? (He examines the sandwich.) No, wait a moment, what am I talking about, this isn't schinken, it's knackwurst. What about some knackwurst?
QUILLER. I'm not hungry.
P0L. Aren't you? I am.
He bites into the sandwich, chews a moment and then stands.
You don't mind if I eat while we walk?

Comedy of menace – we got it!! So imagine my excitement when I was shopping in the Waitrose by Russell Square in London, and found the “Delicate & tender German sausage selection.” 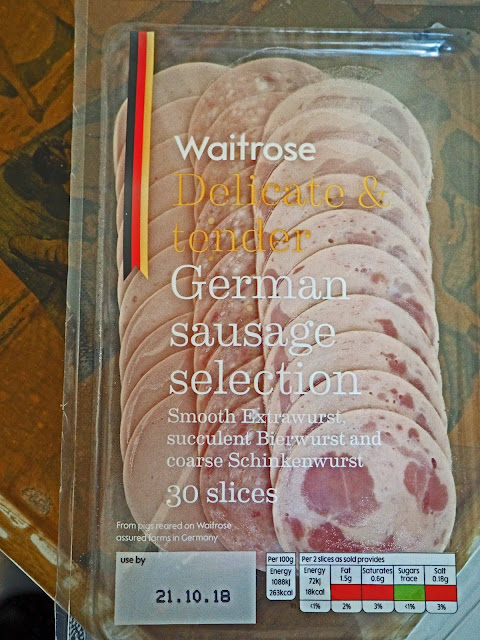 Now you and I may not think that German sausage is especially delicate or tender but you can’t argue with Waitrose, can you?  As you see, the collection consists of “coarse Shinkenwurst, succulent Bierwurst, and smooth Extrawurst. 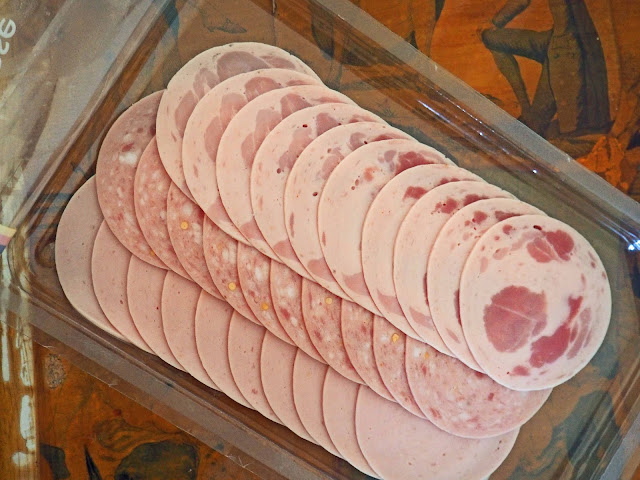 I’d have thought those adjectives were unnecessary, but again Waitrose is the boss 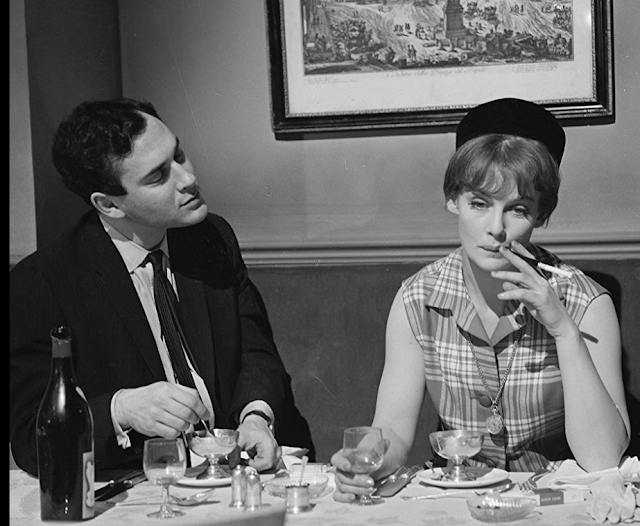 Now, only a fool would attempt to parody our Harold but I find myself imagining a scene in which some British spymaster in Berlin might say to one of his charges,  “No, wait a moment, what am I talking about, this isn't succulent Bierwusrt, it’s smooth Extrawurst. What about some smooth Extrawurst?”

And then imagine my further excitement in finding that Waitrose also sells Bury Black Puddings, from a company that claims (and once again I wouldn’t argue) that black pudding is a superfood. 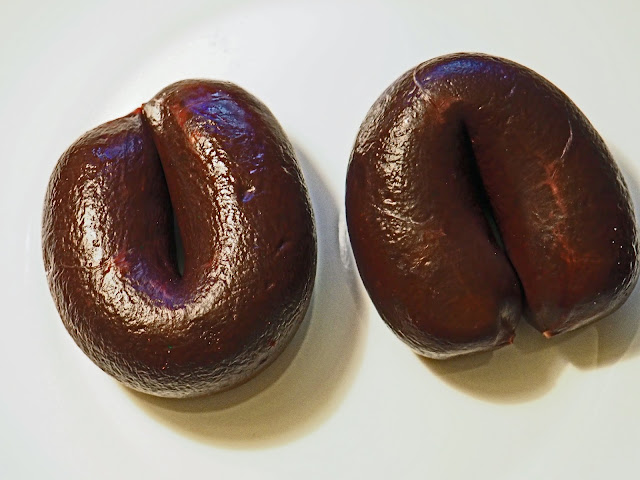 Their website also has recipes for Vegetarian Black Pudding Samosas, which does raise suspicions, I mean come on, have the courage of your convictions, guys.

I don’t think these were the tastiest black puddings I ever ate.  I think they needed more fat, and I wish I’d bought some that I saw when I was up in Sheffiield, but fried up with potato they were good enough.  The thought that they were a superfood didn’t help much. 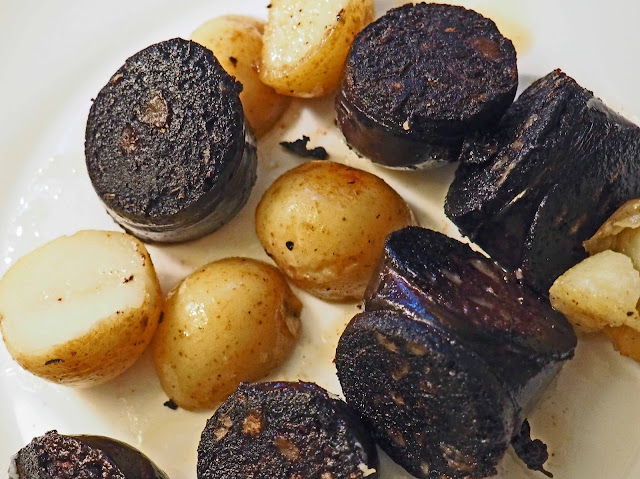 My friend Phil was once offered a job as an apprentice black pudding maker in Lancashire.  The job description said something like “Mustn’t mind wading ankle-deep in blood.”  He declined. The main objection to doing such a job, I imagine, is that it would take all the joy out of eating black puddings, and nobody wants that.
Posted by GeoffNIcholson at 1:00 PM No comments:

I have been in Sheffield eating like a lord, and also like a Sheffielder, which in many ways is same thing. 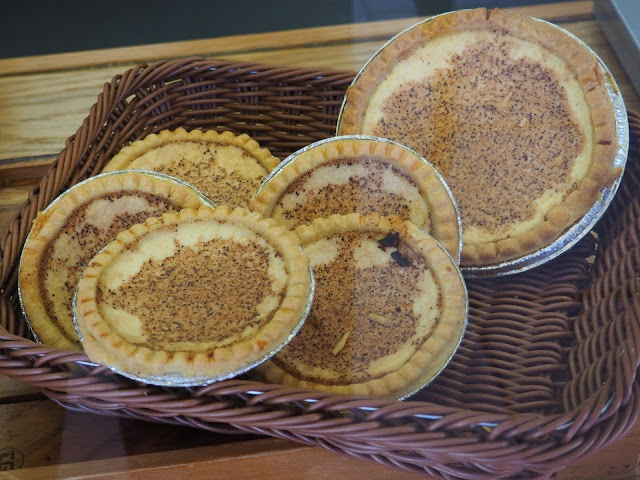 I think I grew up in Sheffield at a very bad time for British food.  A previous generation would happily have eaten rabbit, pigeon, pigs’ trotters, maybe even venison if they were able to get it.  A later generation grew up watching fancy chefs on tv and "experimenting" with kiwi fruit. But I grew up in the days when a mother could think she was doing right by her family when she served frozen fish fillets, and steak and kidney pie out of a tin.

Consequently I don’t often get nostalgic for the food of my youth, but the roast pork sandwiches of Sheffield (and I know they’re found other places too) continue to haunt my taste buds.  This is one I ate at the weekend from Beres Pork Sandwich Shop in the city centre. 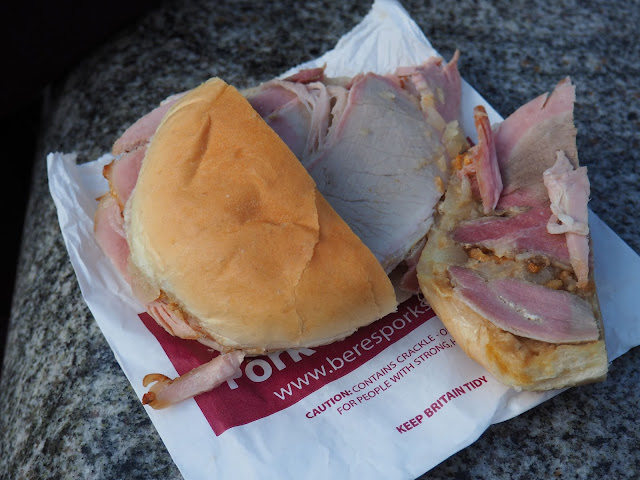 Beres have been in business since 1961, which probably makes them newcomers in the world of the Sheffield pork sandwich – Funk’s of Hillsborough have been around since at least the 1890s.

And you know, I like the roast pork well enough, but I think it’s the extras that really move me: the stuffing, the apple sauce, the crackling, all of them present in the sandwich above.  The crackling is only “recommended for people with strong, healthy teeth” – it says so on the bag. 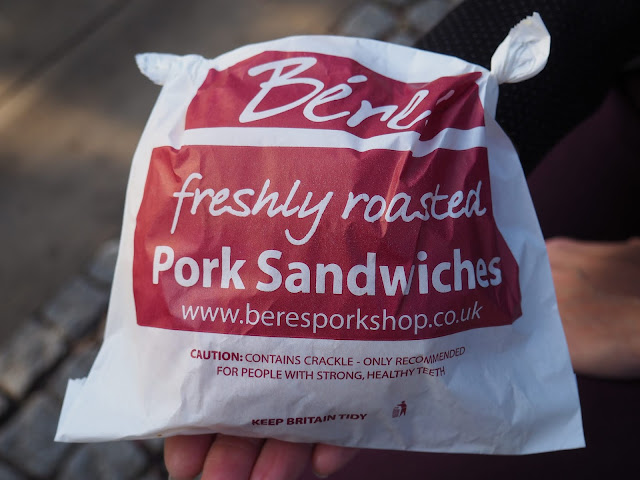 It surely comes as no surprise that Sheffield is the home of a good meat pie, and so no huge surprise that there’s a restaurant on Division Street called Pieminister – part of a small chain that was actually founded in Bristol.  We tried going there at about 9 o clock on Saturday night, but were told they’d sold out of everything except mashed potato, which was surely a good sign, so we returned the next night. 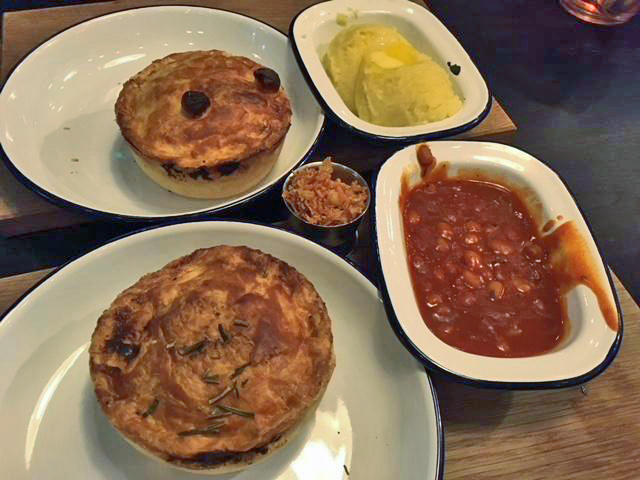 The two pies you see in the picture above are the Moo – “British Beef Steak and Craft Ale,” and the Deerstalker – “Wild British Venison, Bacon, Red Wine and Green Lentil.”  Gotta say I didn’t notice the green lentil, but you tend not to when there’s venison around. 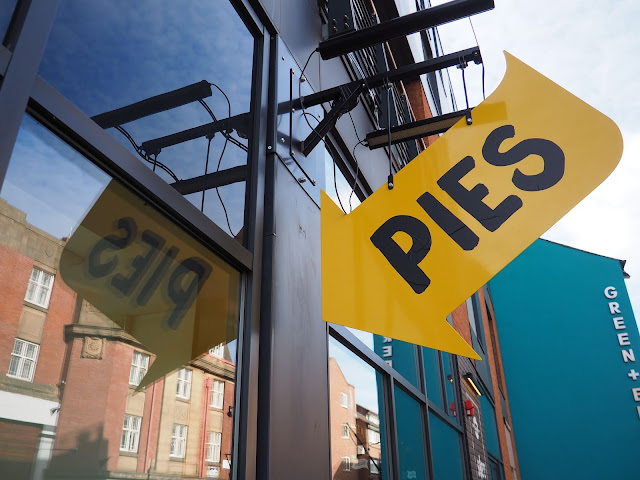 I don’t suppose hotdogs are especially local to Sheffield.  I occasionally had one as a kid, but it wasn’t a meal, just something you ate when you were at the seaside or at a fun fair, kind of like candy floss.  But after eating hotdogs in Chicago last month it was impossible to resist the “Bulldog” on the menu at the Fox and Duck in Fulwood Road, Broomhill, a pub that calls itself “a lively boozer.”  And no, I have never heard the word scran used in Sheffield or anywhere else. 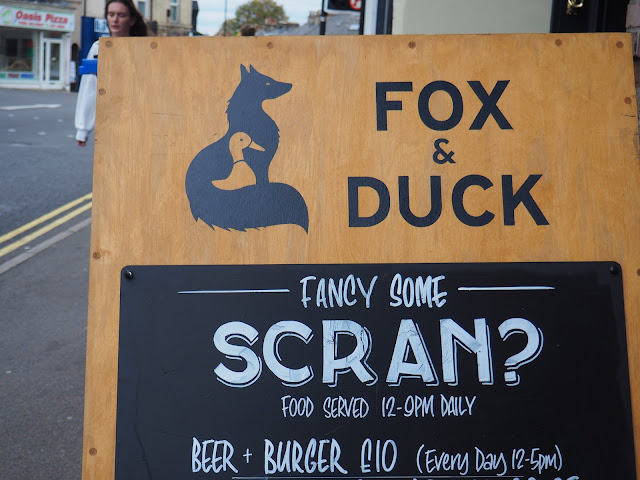 The Bulldog was pretty decent, and the things on the top that look like wood shavings are in fact “grilled and crispy onions" sitting right on top of the raw onions. 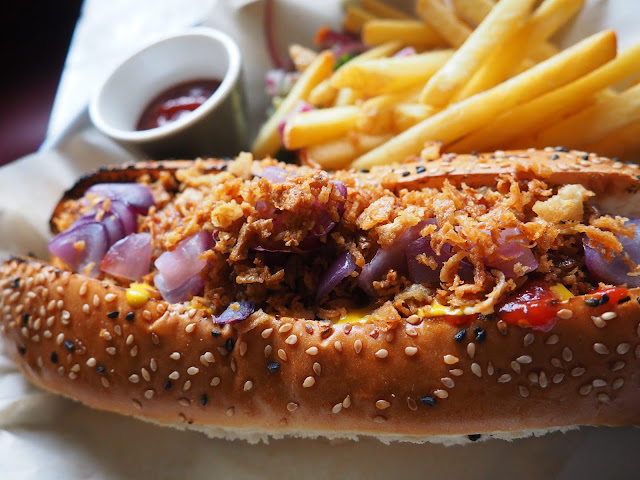 There was also deep fried and breaded haggis with tandoori ketchup (fusion cuisine, we got it!).  It looked like this and was “interesting” though I don’t think it would satisfy many true haggis fans: 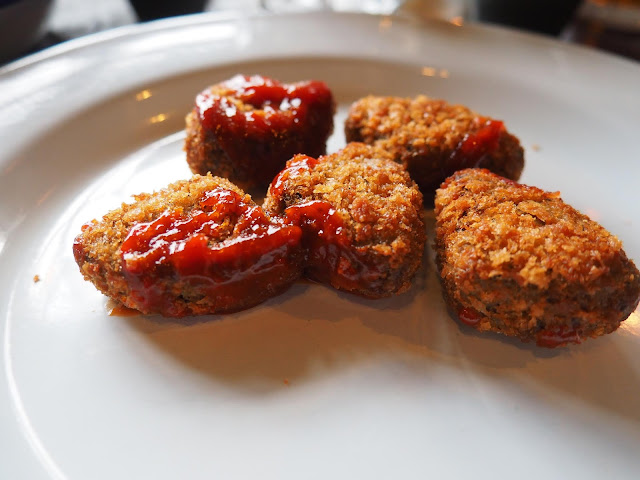 Need I say that Japanese food didn’t feature in my family’s cuisine, or anybody else’s at the time I was growing up in Sheffield.   Just a few years back, as my Japanophilia was taking hold, I tried to find a Japanese eatery in Sheffield and could only locate one, which from the reviews sounded very dodgy indeed, so I didn’t eat there.  But now Sheffield has a significant Asian population, not many of them Japanese I’d have thought, but even so these days you can find 15 or more Japanese restaurants in town.

We settled for the Mr Miyagi Revolving Sushi Bar, again on Division Street, just a pie or gyoza’s throw from Pieminister.  Of course like many other restaurants that describe themselves as revolving, the restaurant itself doesn’t rotate, but there’s a circulating conveyor belt that delivers the food.  In this case the empty belt continued to move at eye level, even as the food came via a waitress. 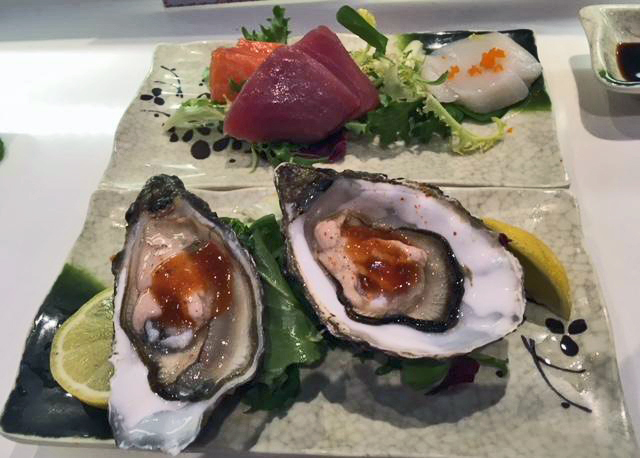 Above is a Classic Sashimi Set, and two Oyster sashimi – which were as good as you could get most places, and more than you could once possibly have hoped for in Sheffield or within a few thousand miles of it.

Posted by GeoffNIcholson at 11:56 AM No comments: