Ya know how you could sell more ceviche around here? 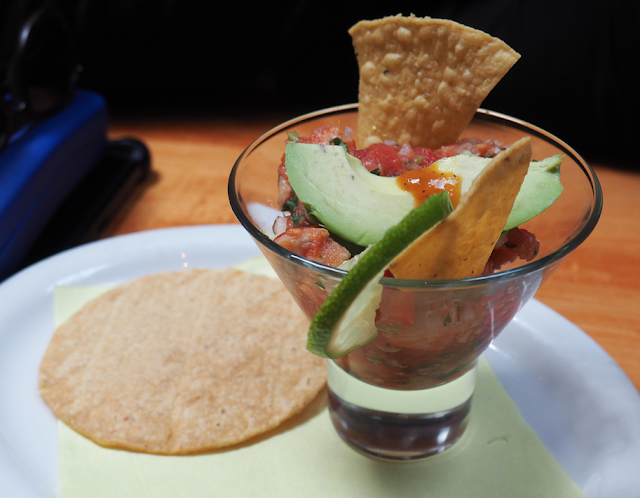 To be fair Loteria, in Hollywood, where this was served as a starter, is generally pretty good on portion size.  This was just a misstep - possibly on our part - there were two of us (dudes) sharing.
And, to be fair, there were four tiny Japanese girls at the adjacent table (glued to their phones throughout their meal) who, given the minuscule amounts of food they ordered, would probably have thought this was a feast.
Posted by GeoffNIcholson at 10:32 AM No comments:

Email ThisBlogThis!Share to TwitterShare to FacebookShare to Pinterest
Labels: ceviche 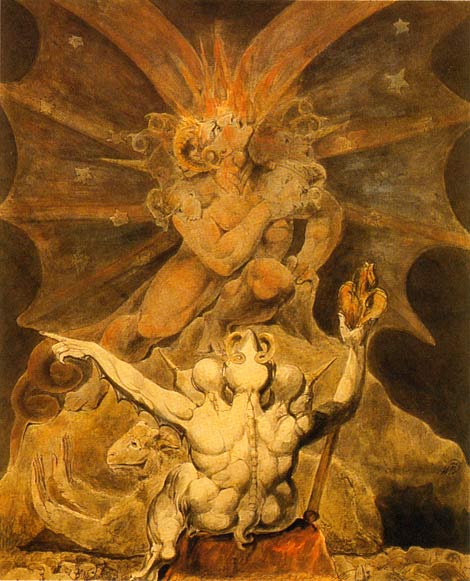 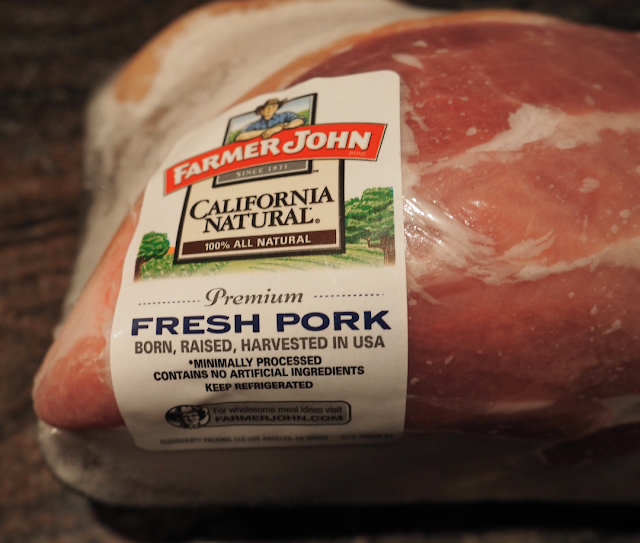 I don’t really know what “natural” means when it comes to supermarket pork – not much I suspect, and I definitely don’t know what “California natural” means (the pigs get to surf?) though I see it is a registered trademark, and I do know there’s some information out there suggesting that Farmer John isn’t very kind to his pigs. 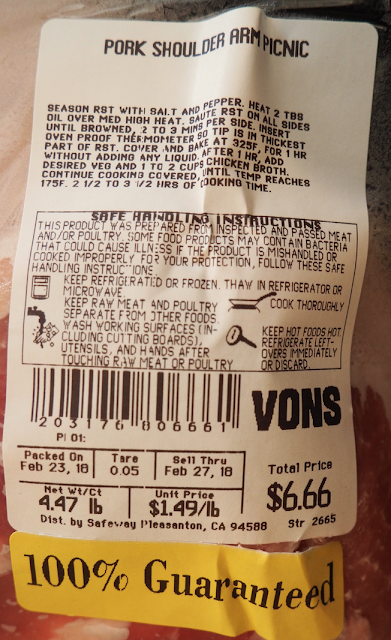 Nevertheless, industrial consumer that I am, when I saw a chance to buy a reduced price pork shoulder I couldn’t resist.  Then I saw the price – $6.66 – the price tag of the beast, and I hesitated.  But only briefly.

Posted by GeoffNIcholson at 8:56 PM No comments:

Email ThisBlogThis!Share to TwitterShare to FacebookShare to Pinterest
Labels: Farmer John, number of the beast, PORK

While I was in England I went to visit photographer Marin Parr at his newly established Martin Parr Foundation in Bristol.  I wanted to pick his brains for a book I may (or possibly may not) be writing about obsession. 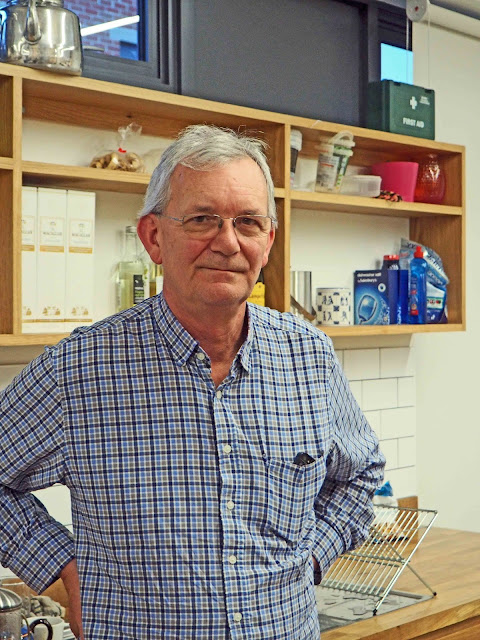 We did talk briefly about photographing food and the current obsession (or is it already fading?) that people have with taking and then sharing snapshots of their breakfasts and lunches, which I find fascinating though I know some people get annoyed by it.  I don’t think Parr was exactly responsible for this but I do think he was way ahead of the game.

His early work investigated England and Englishness, a subject that’s pretty much synonymous with investigating social class; and food is a better class indicator than most.  The earliest Parr food photographs I’ve seen come from a 1975 series titled Prizewinners, images of award-winning vegetables or baked goods, from local village fairs and fetes.  This one is of jam tarts: 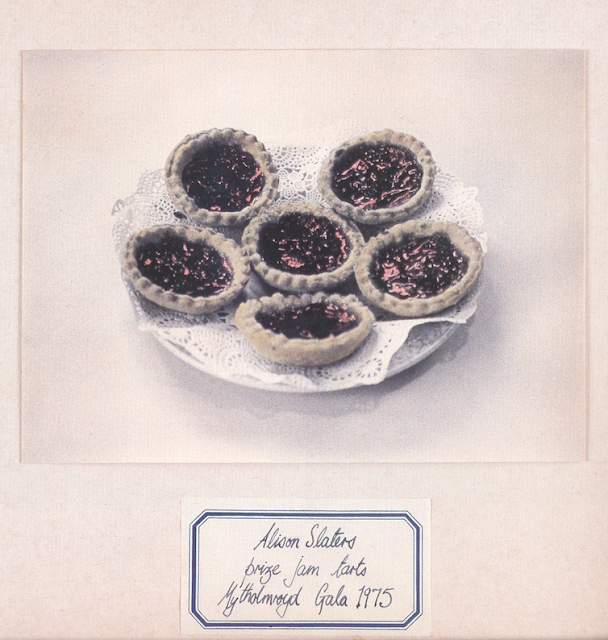 A selection of his later food photographs, a fairly small selection given how many he must have taken, appears in the book Real Food. There's an introduction by the blessed Fergus Henderson. 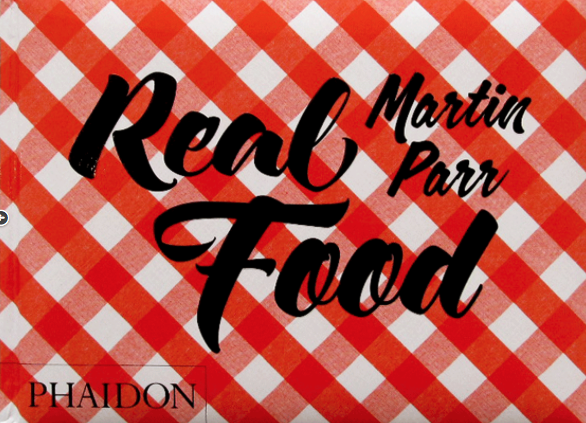 It’s food from all around the world, and much of it has a melancholy garishness that Parr specializes in.  Also available in a French edition: 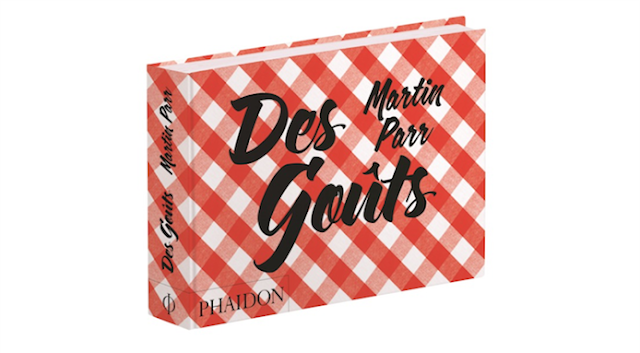 Sometimes it’s possible to match the food with the country it it comes from, though other times it would be just about impossible without the captions.  Would you really think this was a picture of food in Mumbai? 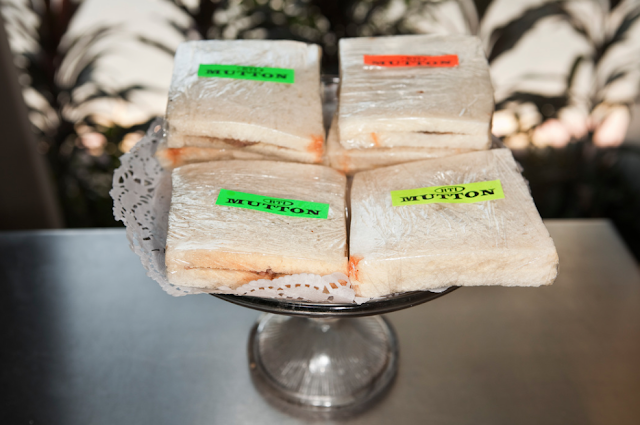 Parr and I were in the back of the Foundation building, in a sort of kitchen area, and we sat down and he made me a cup of tea, which was very decent of him, and we talked about photography as the means of pursuing obsessions but also as an obsession in itself, and I tried to get the conversation round to the question of whether photographers are obsessed with the subjects they photograph or with the process of taking photographs. This seems particularly relevant in relation to food.  Anyway, you’ll have to wait for my book in order to read Parr’s views – don’t hold your breath.

The conversation went well enough, and afterwards I asked if it was OK to take a few snaps in the back area of the Foundation and he said of course.  If I understand him correctly, he believes everybody should have the right to photograph pretty much everything. 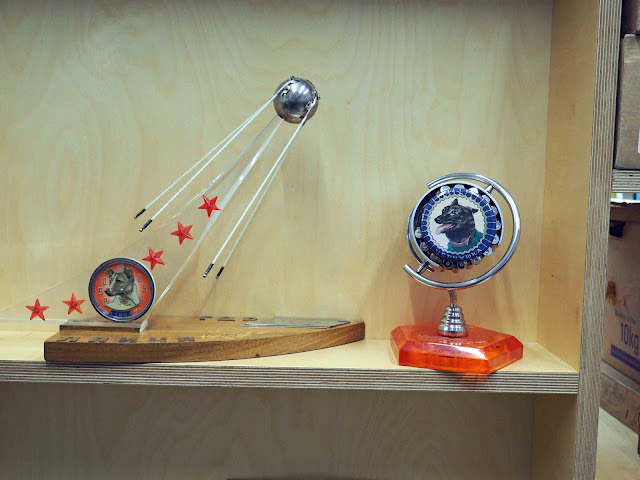 There was some Russian space dog memorabilia (above). And there on the kitchen table was a bowl of fruit, along with some scattered rough prints that Parr and his assistant were in the process of editing, and I took a picture of the table and especially of the fruit.  And I don’t want to sound too self-congratulatory about it, but I gotta say, to my eyes anyway, it does look just a little bit “Martin Parr.” 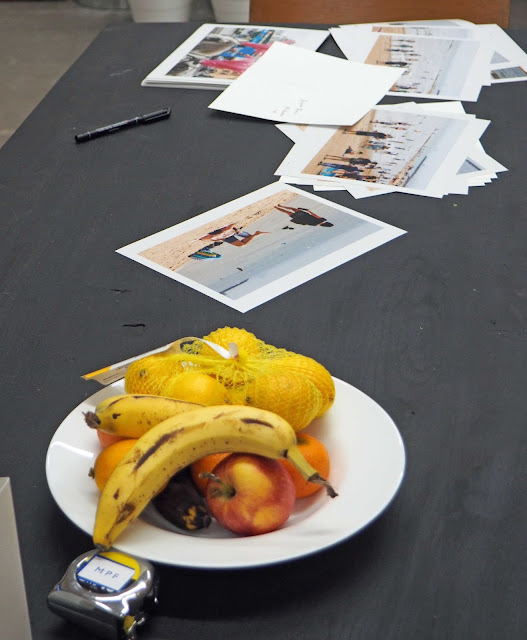 Posted by GeoffNIcholson at 1:41 PM No comments:

An English sandwich in England, though actually it's a kind of Spanish ham sandwich at Enrique Tomas, a “jamoneria” in Soho: 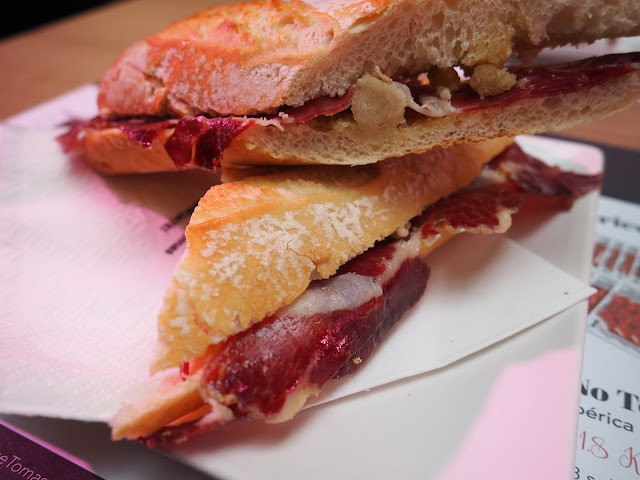 Another English sandwich in England, though actually it’s kind of an open-face Danish beef sandwich, at Ole and Steen, in Tottenham Court Road: 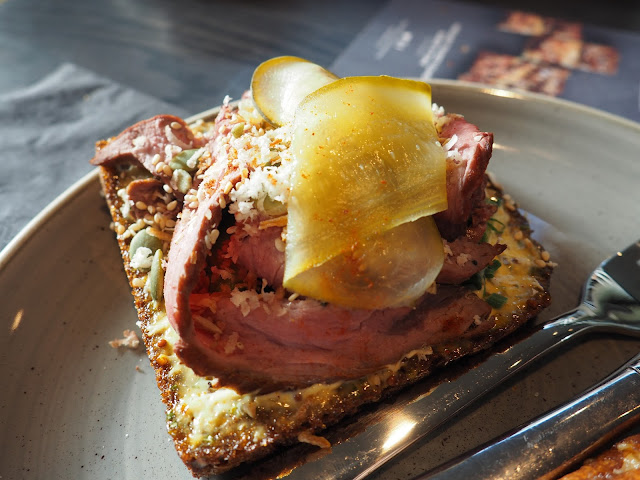 And now back in LA, and an all-American (and organic) tuna salad sandwich at the Mustard Seed in Los Feliz: 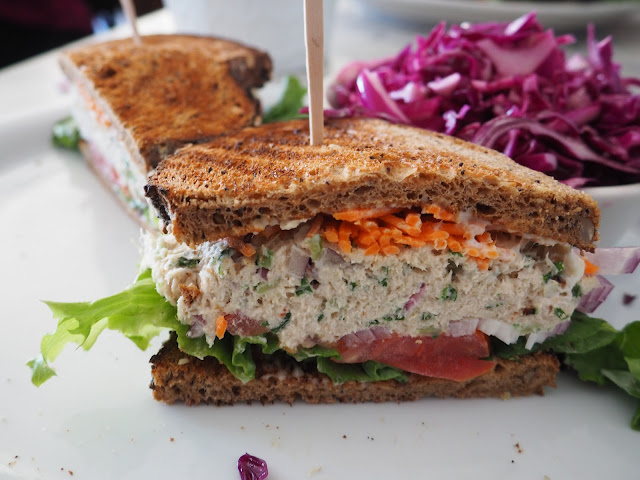 The quest continues.
Posted by GeoffNIcholson at 1:32 PM No comments:

THE LOST MEALS OF OLD ENGLAND

Want to see some food I ate in England before it got all messed up and eaten?  Well of course you do. 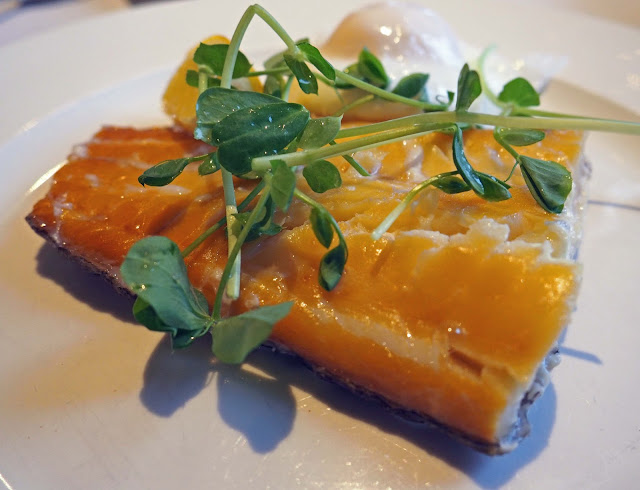 Above is an excellent piece of haddock poached in milk, eaten for breakfast at the Bear of Rodborough, in Stroud, Gloucestershire – there’s a poached egg hiding round the other side.
The hotel also has two taxidermied bears in the hallway.  This is one of them: 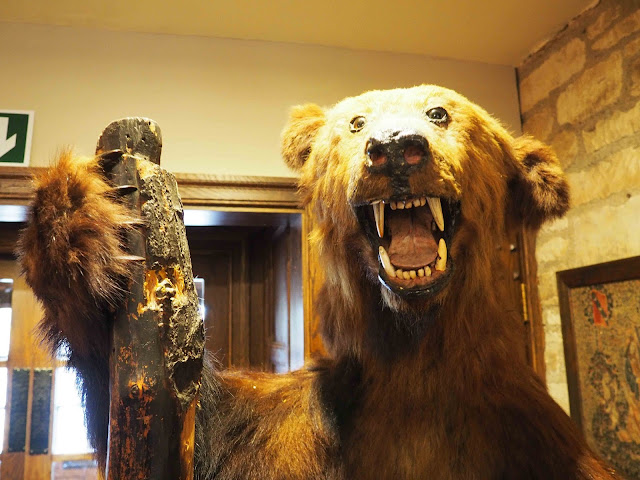 Below is another breakfast, a Bakewell tart I ate for breakfast at the café of the Photographers’ Gallery in, Ramillies Street, London. 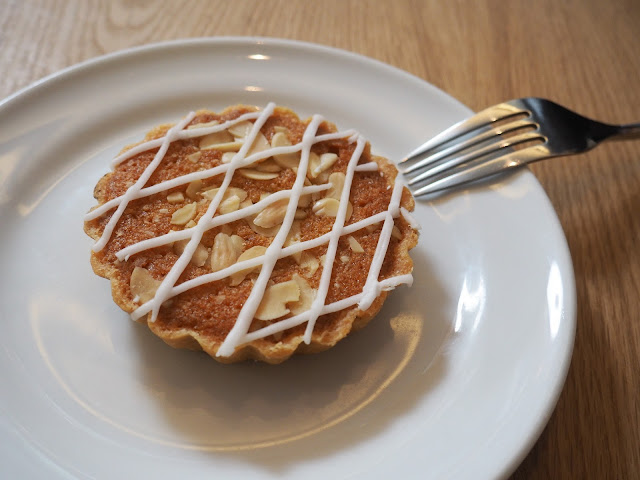 My mum used to make Bakewell tarts (Bakewell was only a few miles down the road from where we lived), but she thought the icing was going too far.
In the Photographers’ Gallery there was an exhibition of Polaroids by Wim Wenders.  This was one of them: 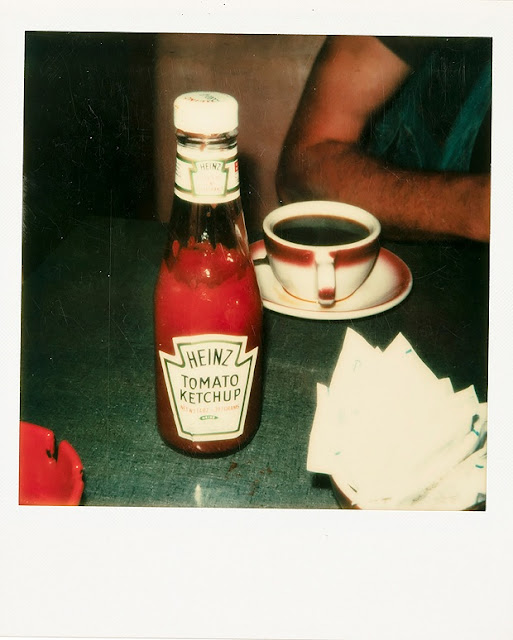 And below is the suckling pork belly eaten at the enigmatically named 28-50, in Maddox Street, London, which describes itself as a “wine workshop and kitchen” though it felt very much like a fancy restaurant to me. 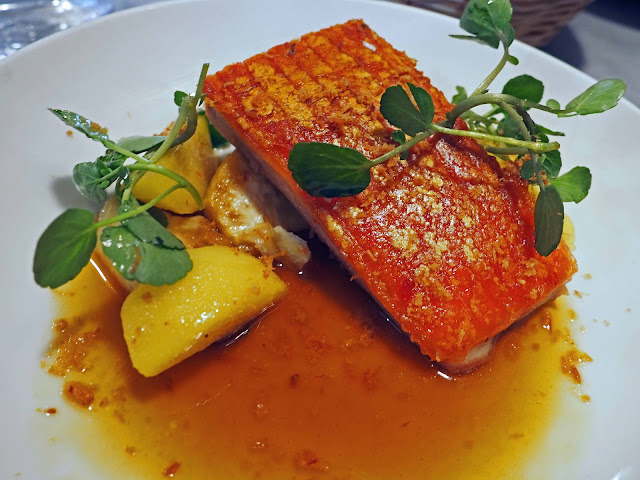 The waiter said this was the first day the chef had ever had put it on the menu and what did we think of it?  I said I thought it was really very good.  In fact, I now think it was the best thing I ate in England

But I believe the most unexpected thing I ate was this: 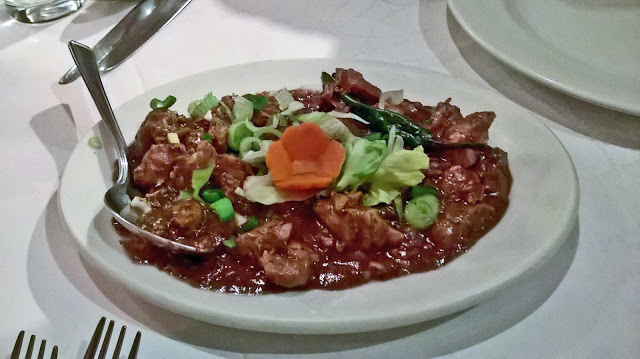 It’s dinuguan – described on the menu of Josephine’s where I ate it, a Filipino estaurant in Charlotte Street, as “Filipino black pudding stew - diced pork with blended herbs and spices cooked in black pudding sauce.”
Now I don’t really know Filipino cuisine and I was far too cool to look it up on my phone but I was pretty sure there’s no such thing as “black pudding sauce” whereas I do know there are many sauces around the world that are flavored and thickened with blood, and this was obviously one of them.  I suppose I can understand the need for euphemism but it really wasn’t necessary for a lad like myself
It was wonderful, rich and dark and savory in all kinds ways, some familiar, some unexpected.  As for the “diced pork,” well subsequent research tells me that dinguan is a pork offal stew made “typically from lungs, kidneys, intestines, ears, heart and snout.”  I can’t swear which of these were or weren’t in the Josephine’s version, but sometimes it’s OK for a dish to keep some of its mystery.

Posted by GeoffNIcholson at 6:44 PM No comments: