Just for the sake of completeness, here's Angie Dickinson with a (rather small) slice of avocado.

Posted by GeoffNIcholson at 1:36 AM No comments:

Well, I tracked down some avocados at the Tesco Metro, (I mean it wasn't exactly an expedition) and a can of lump crab (i.e the white stuff) at the Co-op – a squirt of mayo, some lemon juice, a bit of seasoning and I was ready to go all Sylvia Plath: 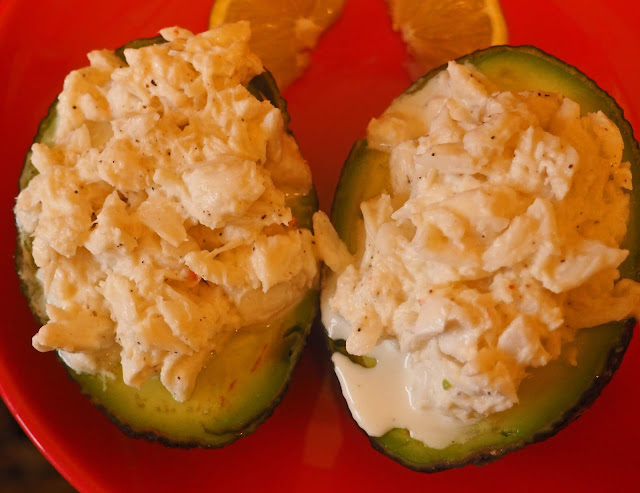 It tasted fine and there was no food poisoning: so win, win.

And I did a bit more avocado research. It seems they were a tough sell in Britain partly because of the name ‘avocado pear.’  People assumed that since it was called a pear you could just bite into it, like a pear.  Some education was required and provided.  This is Australian: 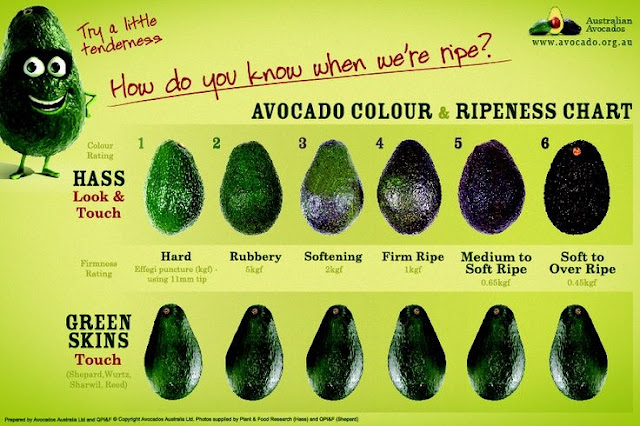 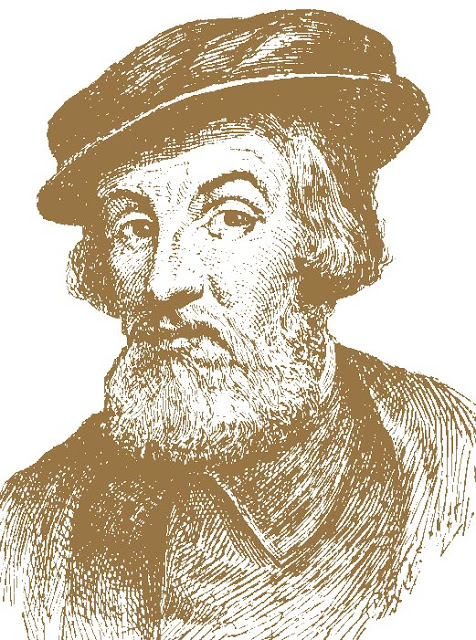 who ate it with cheese, as though it was an apple.  Other Spaniards added sugar, which I suppose made it more like a pear in certain respects.

Posted by GeoffNIcholson at 10:34 AM No comments:

THE NOT SO DUD AVOCADO 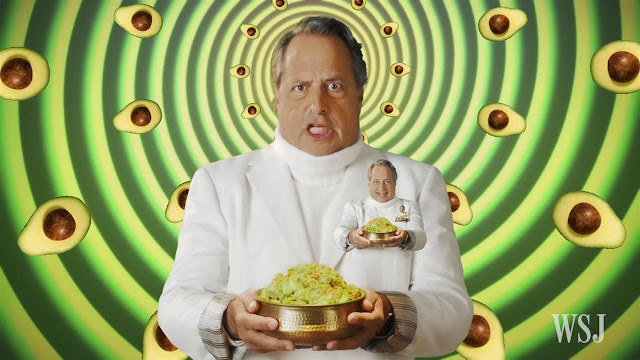 I remember my first avocado very clearly.  At my college you were assigned a tutor who was responsible for your moral and emotional welfare.  This included, and was pretty much limited to, inviting you round to his house for dinner with him and his wife, once in the entire three years. 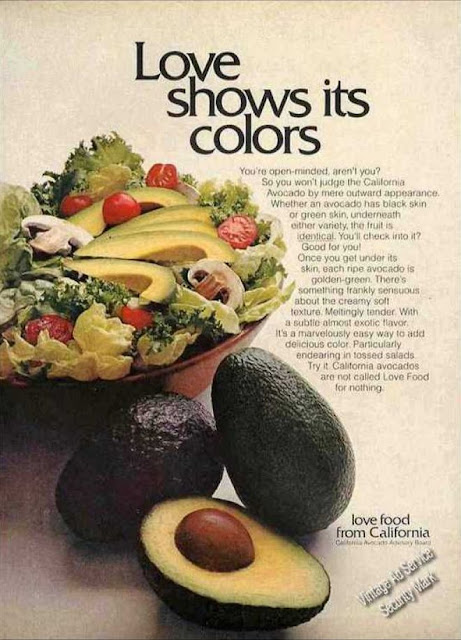 And we had an avocado salad starter. At least I was pretty sure it was. I’d heard of avocados, might even have seen a picture of one, but I’d certainly never tasted one.  Obviously I didn’t want to humiliate myself by asking what I was eating, and in retrospect I do know that it was avocado.  It tasted good, even if it wasn’t quite the exotic sensation I’d been expecting.

These days I don’t eat avocados as much as I used to – and I’ve never eaten one on toast - but right now I’m in the middle of reading Sylvia Plath’s The Bell Jar – published in 1963 but set in New York in 1953, a time when I’d have thought that very, very few people in Britain were eating avocados.  Of course everybody else already knows how great The Bell Jaris, but I was especially taken by a scene in which the heroine goes to a fancy lunch and has an avocado filled with crab meat.  Something like this, I imagine (thanks LoveofCooking): 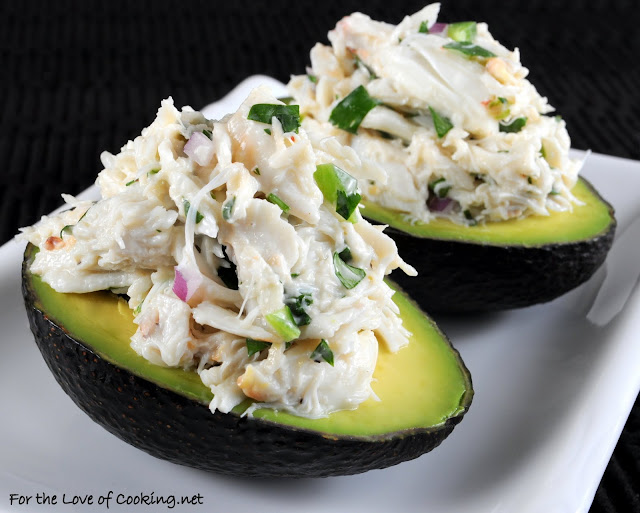 I was reading the book in bed last night and it sounded so good that I thought, first thing tomorrow I’ll be off down the shops buying an avocado and some crab meat (the latter in a can, no doubt).

But then I read on and it turns out that the crab gives ptomaine poisoning to everybody at the lunch. Plath is also great at describing the strangely mixed pleasures of throwing up. 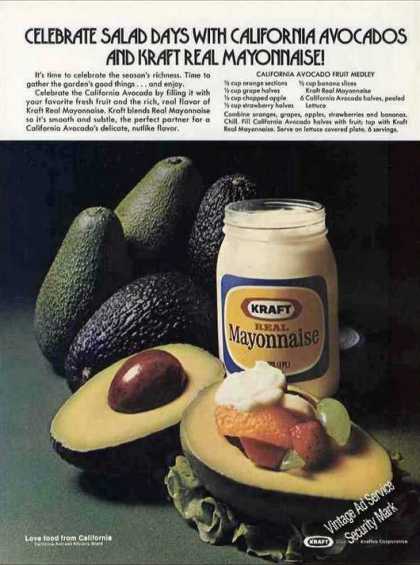 To be honest this did blunt my appetite a bit as I fell alseep, but by the afternoon of the next day I was feeling strong enough to go down to the Co-op and buy an avocado or two.  I arrived there  - and they didn’t have any.  Is it possible that the avocado in England has become SEASONAL?
Posted by GeoffNIcholson at 12:02 PM No comments: 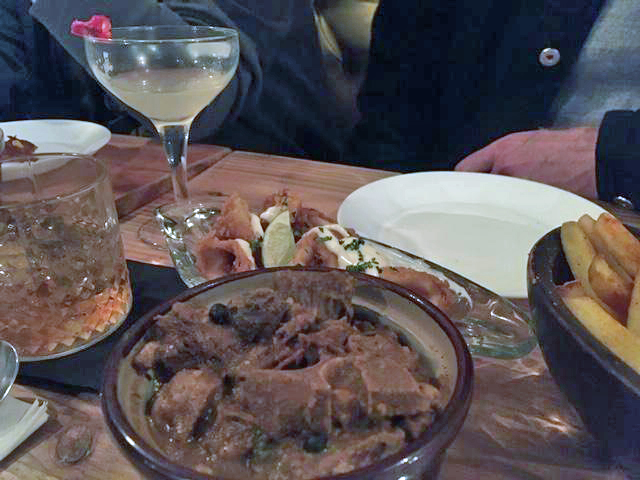 And it only got emptier. See even further left 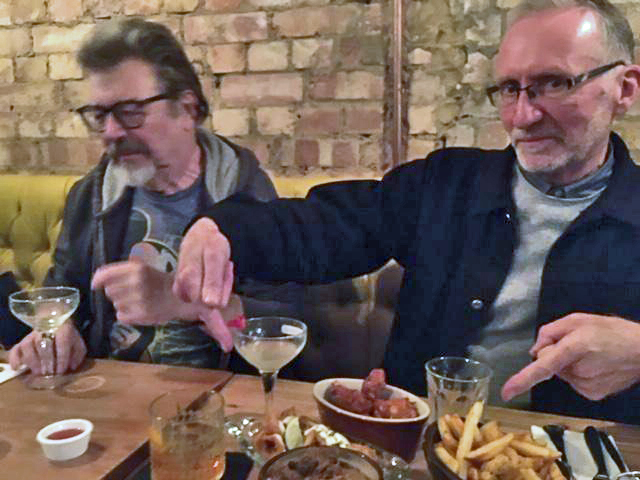 We were in Three Little Birds in Brixton, “Jamaican Inspired Tapas and Rum Cocktails.”  The shrewd observer might note that there’s no rum in a Caliente, but we can live with that.  The cocktail was grand. as was the food, especially the goat stew. You can see it foregrounded in the pics above.

All pics by Luna Woodyear Smiff.

Posted by GeoffNIcholson at 11:43 AM No comments:

Yes, Christmas comes but once a year, though it comes and stays for a very long time.  Mince pies started appearing in supermarkets in these parts in late September – and of course I bought some.  Why do mince pies have a star on them?  Is it the star of Bethlehem?  Did the wise men come bearing mince pies?  There seems to be no biblical authority for this. 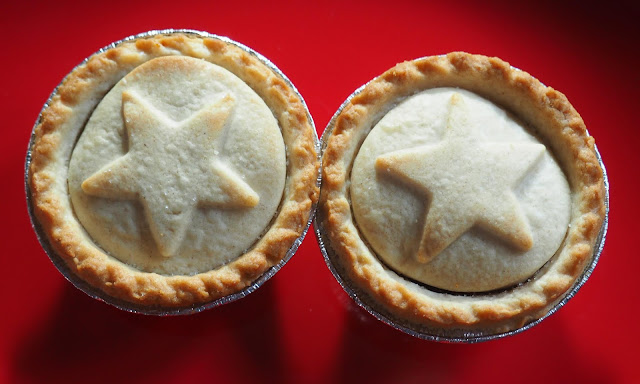 And t’other day - November 7th to be precise - I was getting on a train at Liverpool Street, and in need of a sandwich I bought a Turkey Feast baguette from an Upper Crust shop. 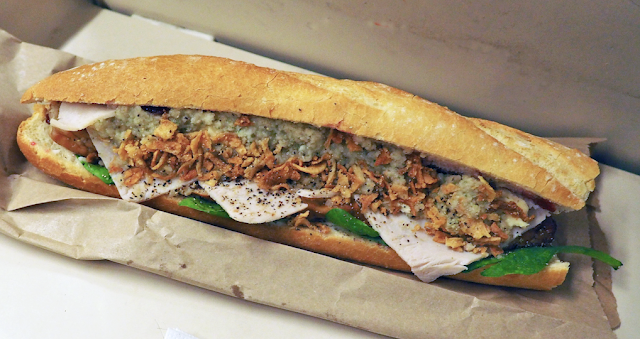 I ate it on the train.  I had one of those little fold down tables in front of me, and if I’d been at home I’d have dissected the contents to see exactly what was inside, but that didn’t seem quite right on a crowded train.  So I looked and I tasted and I made my best guesses.  Actually in other circumstances it might have been hard to guess that the sliced meat was turkey, it could have been chicken or even ham.

There was certainly lots of stuffing and I think those flakey bits you see on top are onion but I wouldn’t swear to it.  There were also some leaves.  Working out what else was in the depths was harder.  There was sliced sausage – chipolatas I suppose - and I could taste cranberry sauce. And then I realized there was cheese in there, brie I think, though if they’re going all Xmas I don’t know why they didn’t use stilton.  In fact I don’t know why they didn’t go the whole hog and shove a slice of Christmas pudding in there too.

I’m not really complaining, or at least only a bit – it went down perfectly well and it all gets mixed up in your stomach anyhow.

Was it festive?  No, not exactly.  Did it seem a bit early in the year for a Christmas sandwich?  I’d say yes, but what do I know?  I tell myself I can eat mince pies any day of the year and when they appeared in the shops in late September I fell upon them eagerly. Now, as we approach mid-November I feel I’ve already had enough to last me a while, possibly to the end of the year – although maybe I’ll get a second wind nearer to Christmas Day. I hope so, though the turkey I could probably do without.

On the other hand, I did just tuck into a Christmas pudding.  Nice packaging 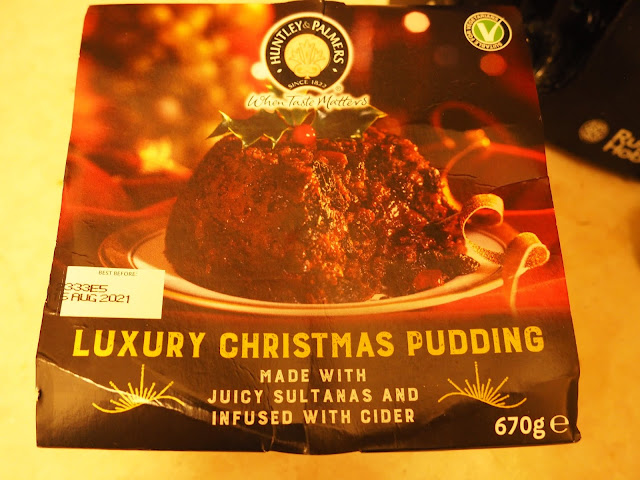 and a product that looked like an Xmas jelly. 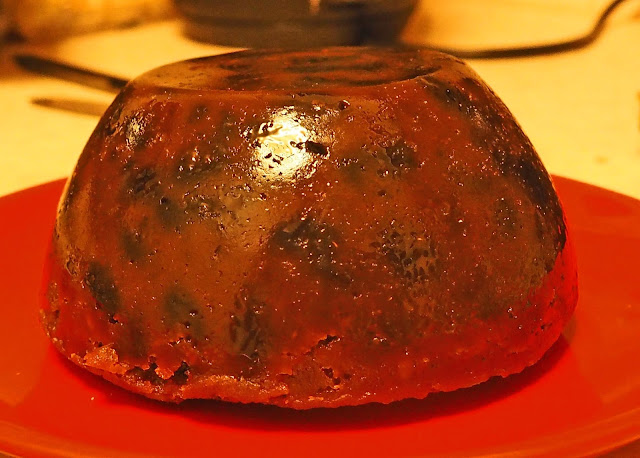 Posted by GeoffNIcholson at 10:59 AM No comments:

My pal Mariette returned from Sao Paolo with a box of Banana Passa: 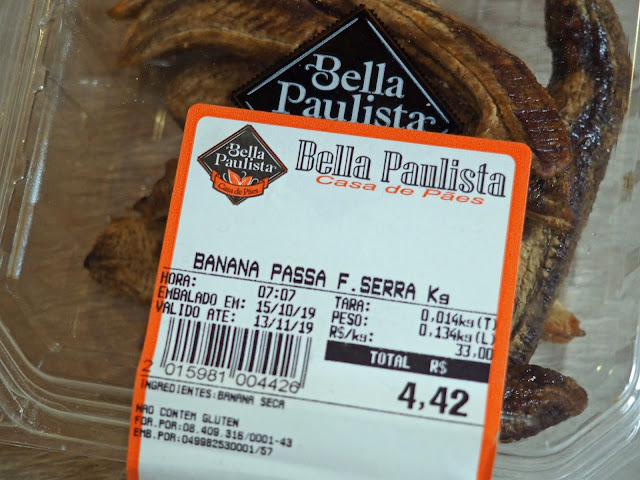 which I imagined would be insanely sweet but they aren’t – they’re justvery sweet, but also very chewy, and somehow the effort of chewing means that you don’t get the sweetness all in one burst, which suited me fine. 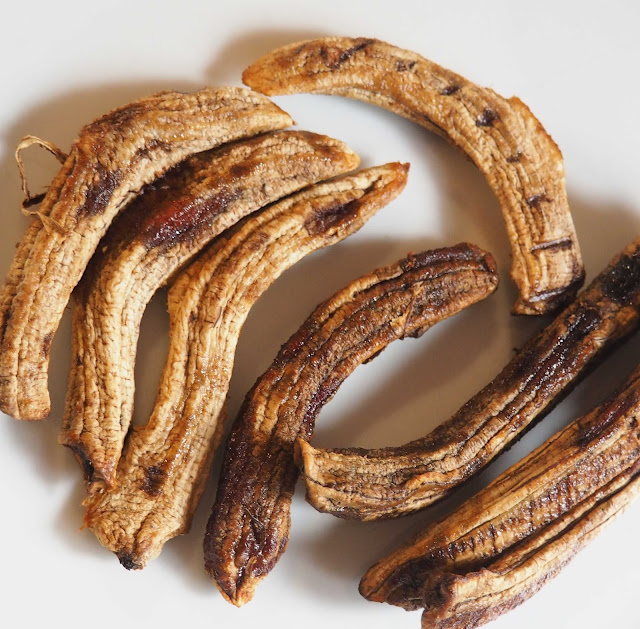 And then my pal Jason showed up, back from Normandy with a bag of apples, mostly cider apples I think – and they’re great – not all the same variety – some very sour indeed some only semi-sour. 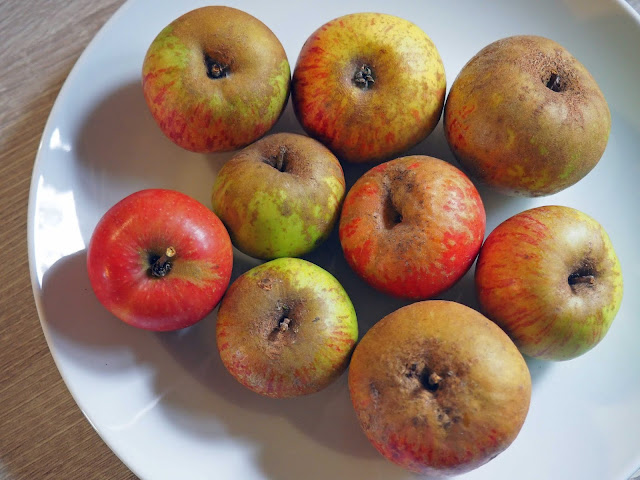 He also produced a bottle of Normandy cider – demi-sec it says on the label, which he says is the main reason he decided to move to Normandy.  It was very fine, but I wouldn’t have complained if it had been a little sourer. 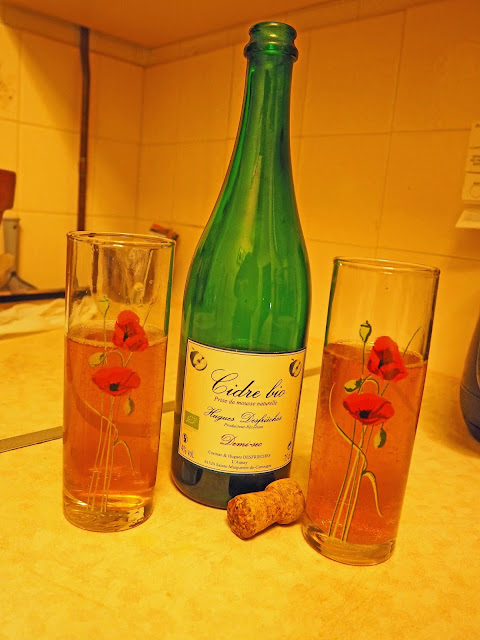 Posted by GeoffNIcholson at 12:46 AM No comments: