THE PIE AND I

I thought you might enjoy seeing some more pie imagery.  The two below were served at Hardwick Hall a few years back. 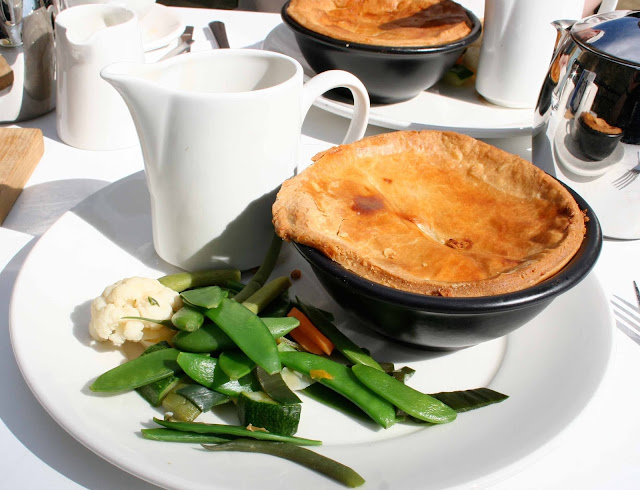 The received wisdom is that British pies are chiefly savory, American pies chiefly sweet – after all, the lad in the movie does not insert his business in among the steak and kidney. 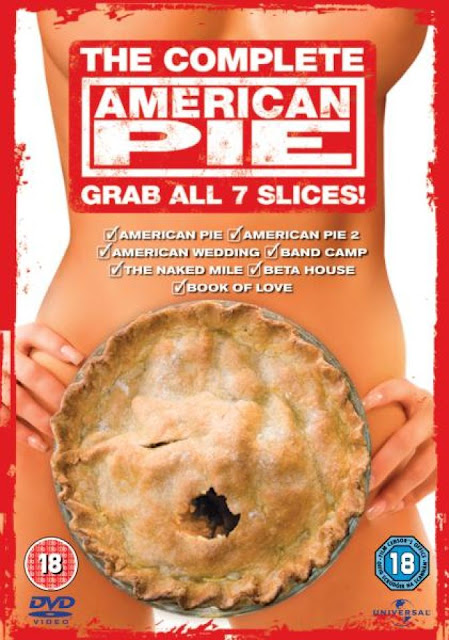 But the rules are blurred.  Of course the British eat sweet pies, apple pies, mince pies, and here’s a rhubarb pie I made earlier (it isn’t the greatest looking pie in the world but it tasted just fine, trust me: 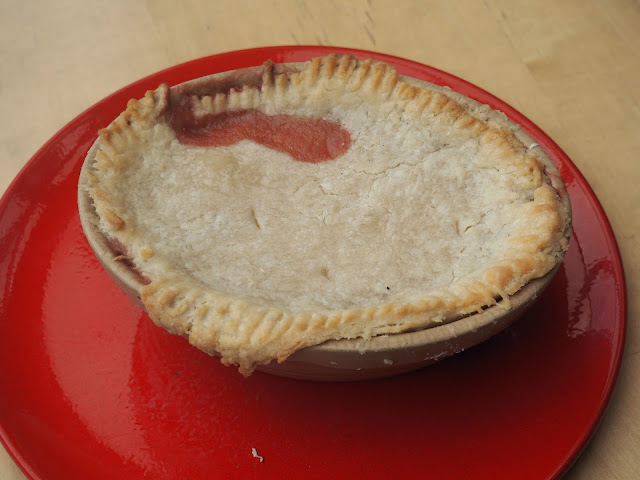 Meanwhile in the USA, you can get a chicken pot pie just about anywhere, and even apparently turkey pies, though I can’t say I’ve ever eaten one. 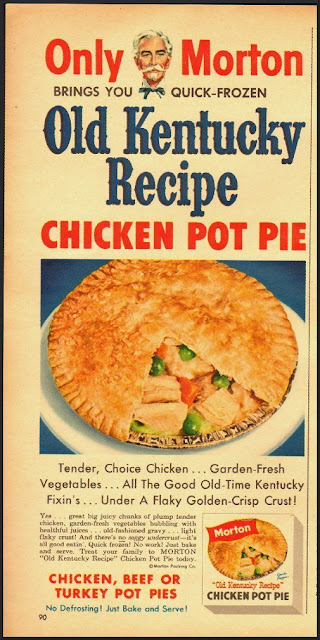 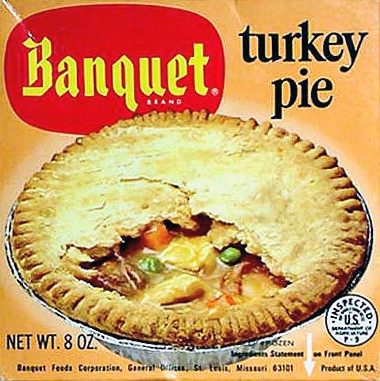 In any case it seems that this sweet/savory dichotomy is a comparatively recent development.  Modern British and modern American food have evolved from a common ancestor.   American food has become ever less like its old fashioned British counterpart, which it once resembled.  This may be because of jingoism but I think it’s more likely to be because a very different set of immigrants has settled in each country.  I think you’ll have to go a very way in the States to find a curry pie. 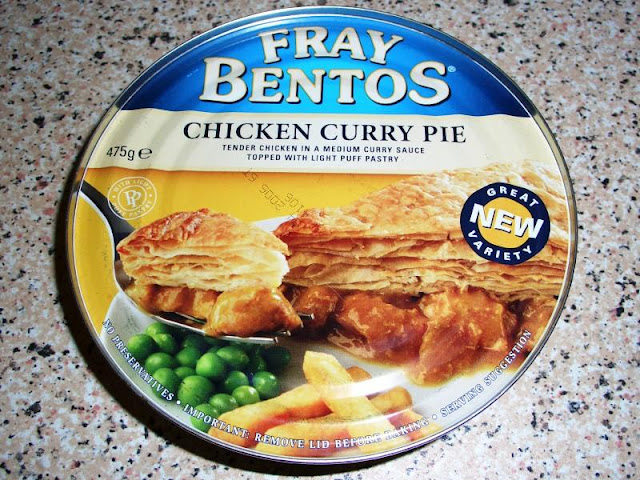 But back in the day there was far more of this kind of thing in America: 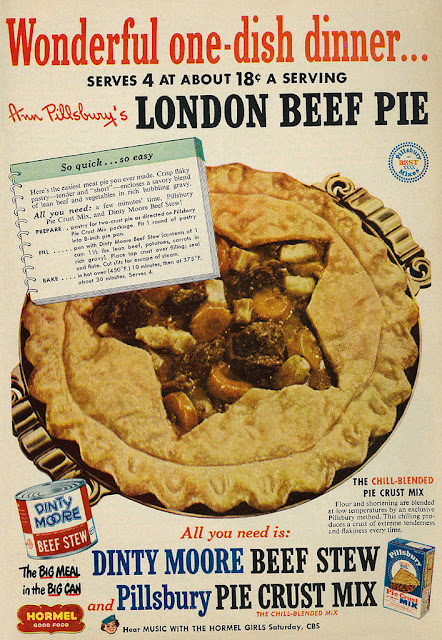 Interesting too to see that this one is made with canned stew – that was how my mother made her pies back in Yorkshire.

And digging around online I found this extraordinary ad – pizza in the shape of a "real" pie. 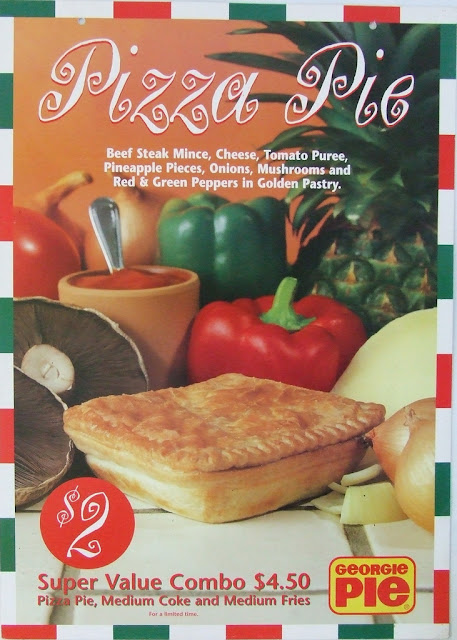 It also once raises the question of whether pineapple belongs with pizza.  You and I, of course, think it doesn’t.  Some, evidently, take a different view.

Meanwhile the British pie continues to mutate.  I suspect the pork pie party may be gone forever, alas: 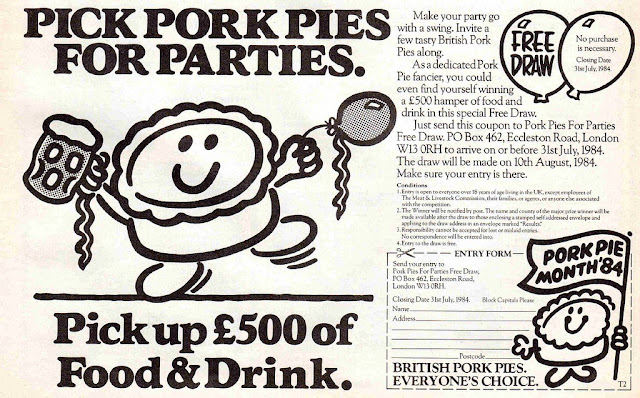 But Wall’s are – or were – offering, the pepperoni pizza slice which seems to be some kind of missing link between pies and pizzas, without resembling (or improving on) either.  An evolutionary dead end, I'd say.  And I’m not sure whether to be comforted or not by the fact that it’s a "limited edition,"  I mean, please, really. 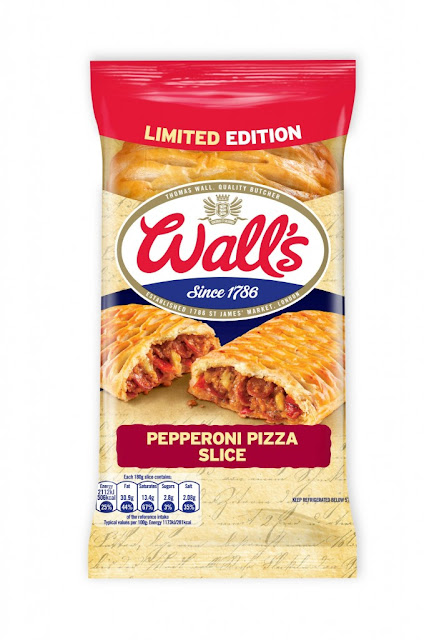 And finally here’s The Fairy’s Pie or “All the Goodies in One Bite,” an advertising postcard for T. E. Dougherty’s New England Condensed Mince Meat Company, circa 1894.  A sweet pie, no doubt, but one containing beef and suet.  Fusion, yeah? 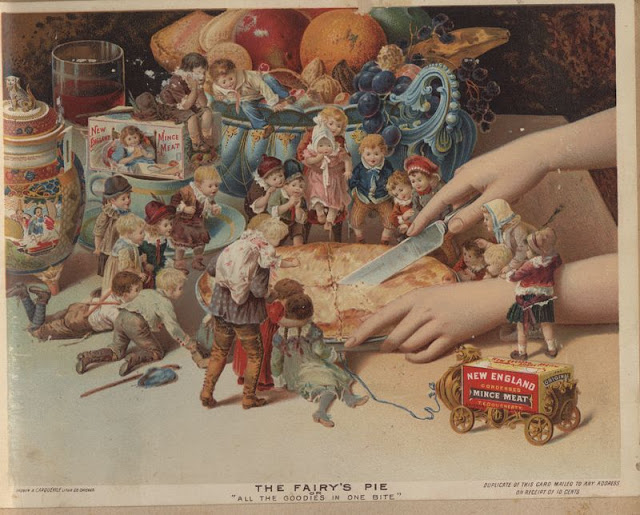 Posted by GeoffNIcholson at 5:17 PM No comments: 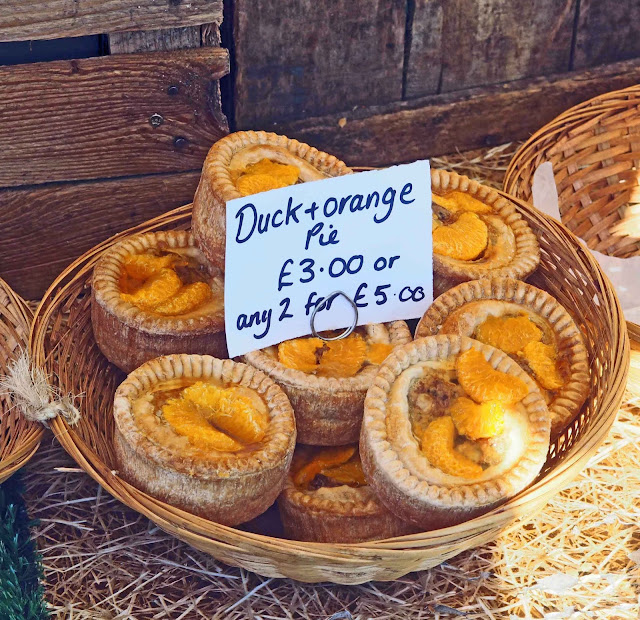 Who ate all the pies? Well it wasn’t me, not all of them, but I did my best when I was in England.  At the Founder’s Arms on the Thames, within site of St Paul’s and the Tate Modern, I went for Founder's Ploughman's Board.  It looked like this. 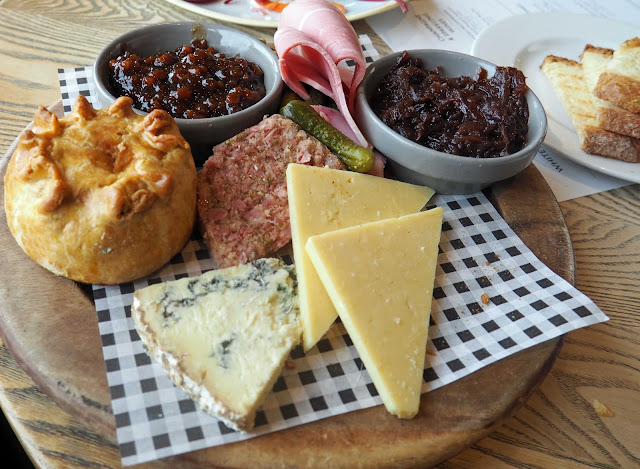 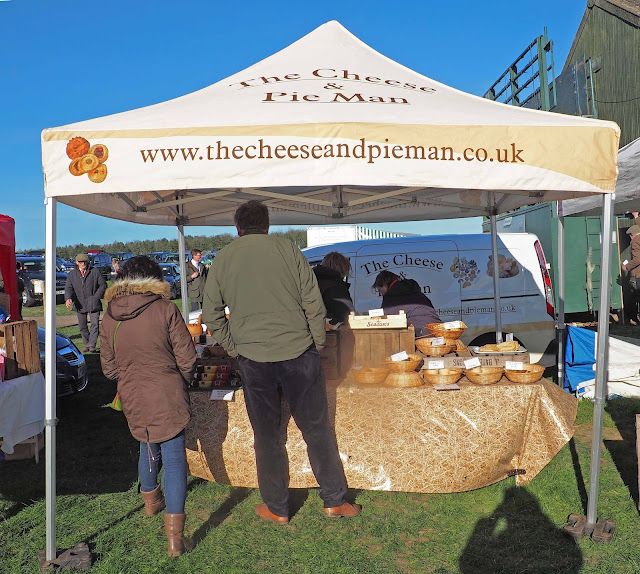 Then I went to the Puckeridge Point to Point at Horseheath in Essex (yes, really),
where I had a couple of pies from the stall belonging to The Cheese and Pie Man.  They have a motto: “A pie is for Christmas not for life and a pie a day makes the day go quicker.” 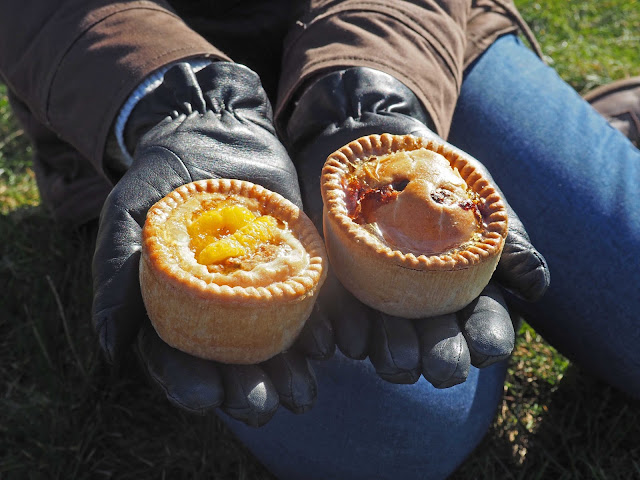 The one on the left is duck and orange, and the one on the right is – wait for it - pork and black pudding.  Have mercy, Mr. Pie Man. 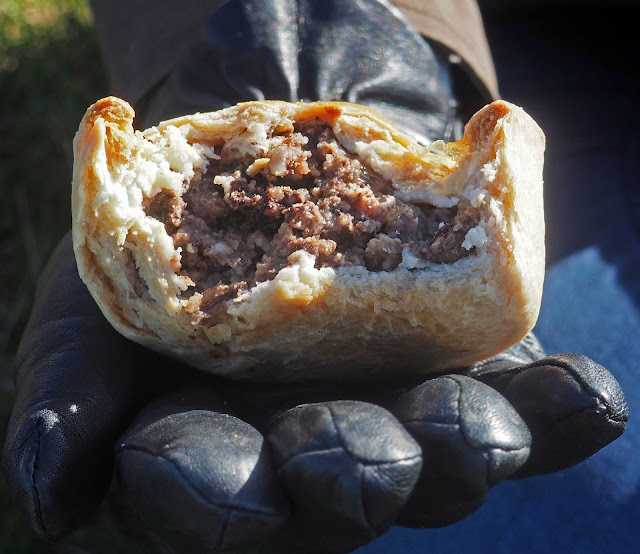 Pies have been on my mind partly because I’ve been reading Alexander Theroux’s forthcoming book Einstein’s Beets: An Examination of Food Phobias – 800 or so pages, exploding with the curiosities of gastronomy and it contains this description of Dr. Johnson’s eating style,
“Whenever he was so fortunate as to have near him a hare that had been kept too long, or a meat pie made with rancid butter, he gorged himself with such violence that his veins swelled and the moisture broke out on his forehead.” No sign of this below: 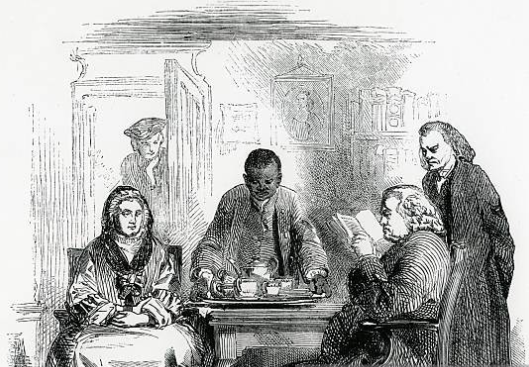 Theroux quotes this from the Encyclopedia Britannica.  I think it’s originally from Macaulay’s Life of Johnson, but I don’t know where he got the information, not by observation, since he wasn’t born until some years after Johnson’s death. 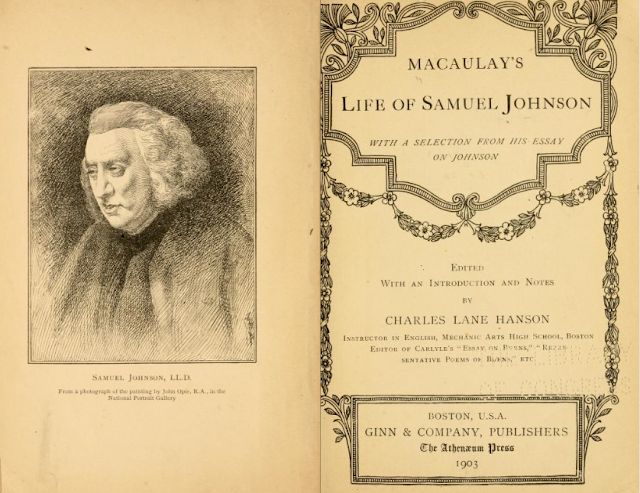 Boswell doesn’t appear to be the source, though he does report Johnson as saying,  “I generally have a meat pie on Sunday: it is baked at a public oven, which is very properly allowed, because one man can attend it; and thus the advantage is obtained of not keeping servants from church to dress dinners,”

And then, in Manningtree, at a restaurant named Lucca, in fact on a Sunday, I had this calzone: 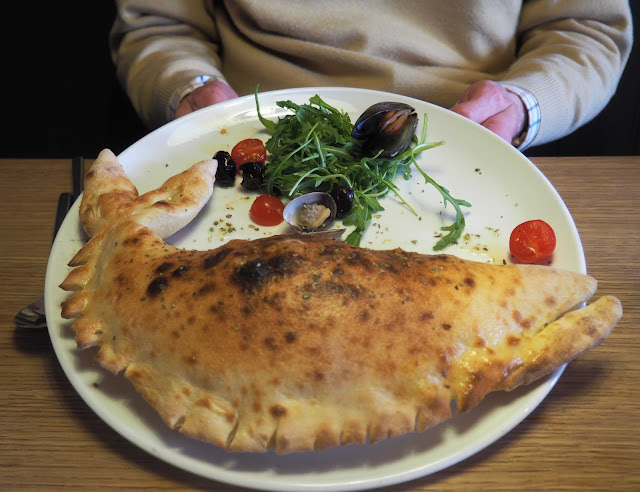 I think a calzone is a pie by any other name. True it’s made with pizza dough rather than pastry, but then again pizzas are sometimes called pies which has always seemed misleading to me, and in any case the end result is still an edible container for whatever filling the chef decides on.  This was a Calzone di Mare:
“Tomato, fior di latte mozzarella, calamari, clams, prawns, mussels, garlic, chill,” it says on the menu.
Boswell tells us that Johnson always ate fish with his fingers, “because I am short-sighted and afraid of bones.”I think he’d have been OK with the boneless Calzone de Mare.  I think his veins would have been standing right out, I think the moisture would have been on his forehead.

Posted by GeoffNIcholson at 4:16 PM No comments: 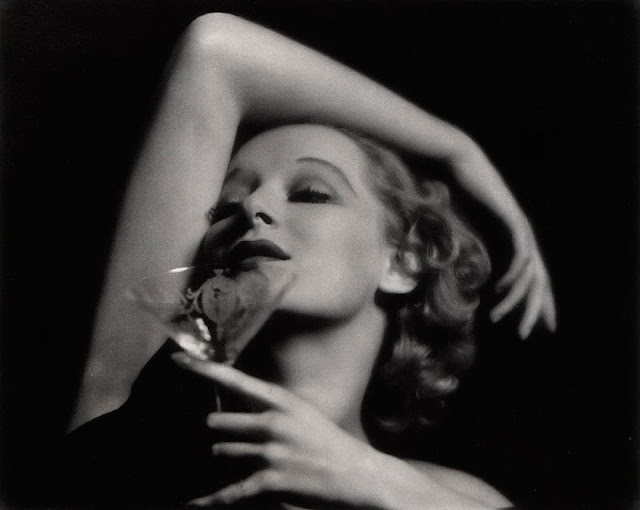 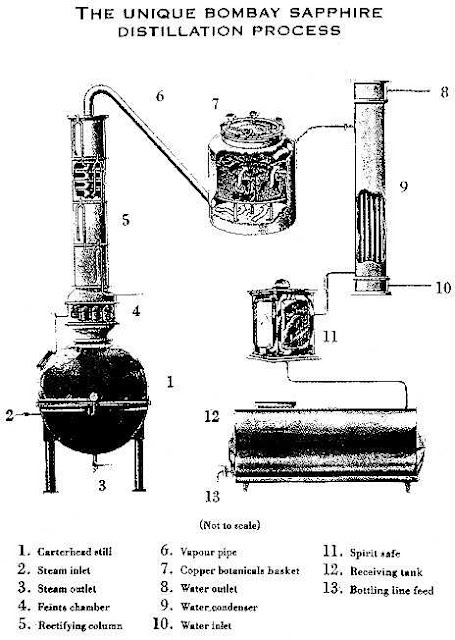 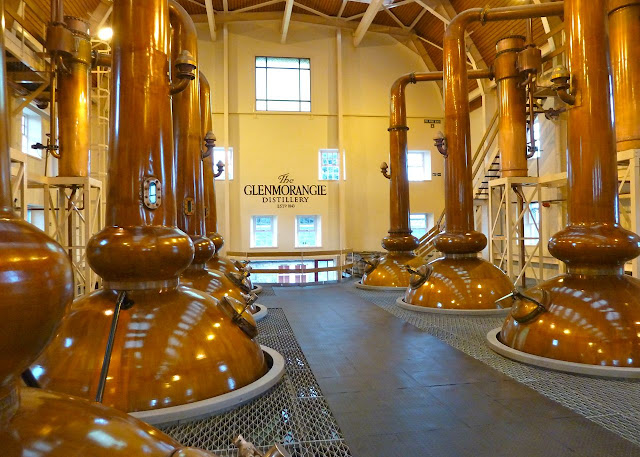 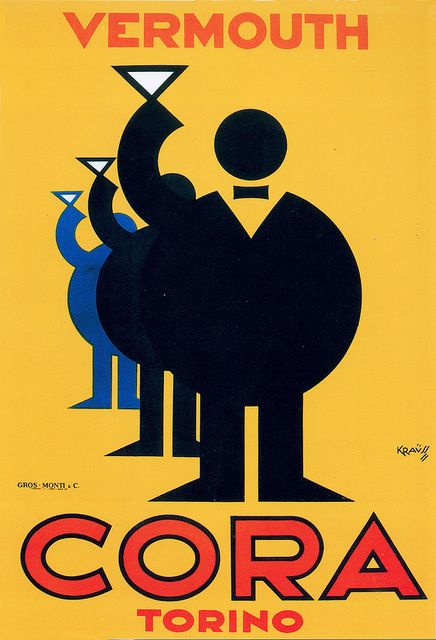 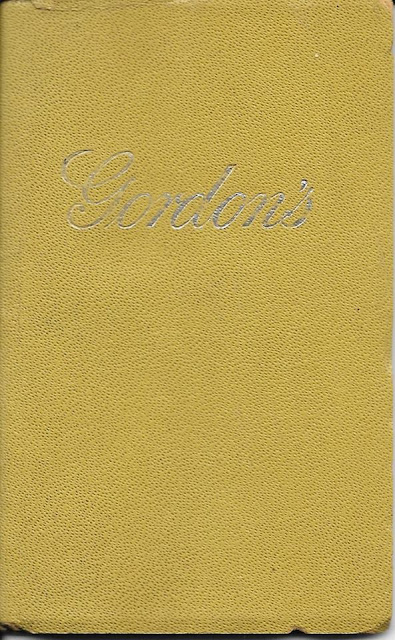 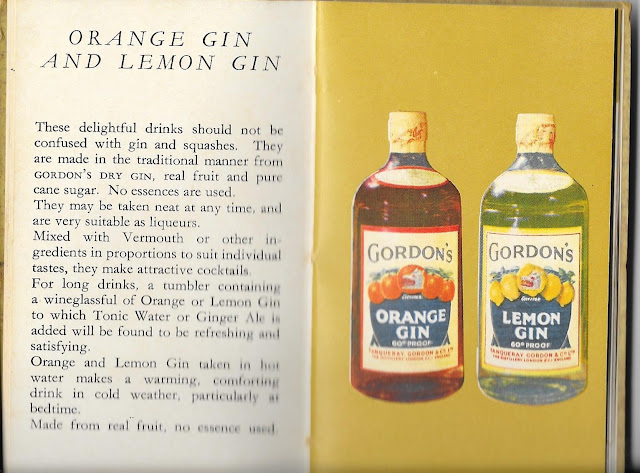 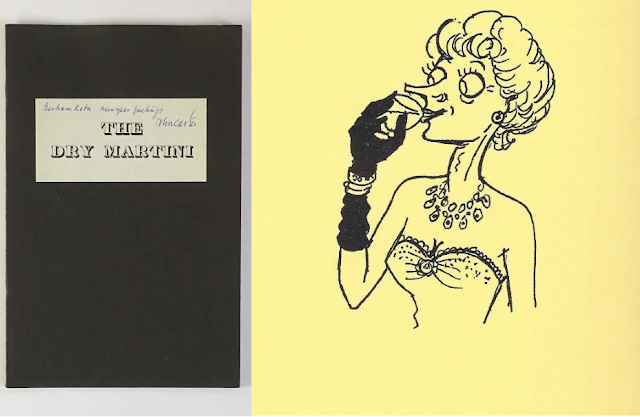 Posted by GeoffNIcholson at 2:42 PM No comments: