I’ve often mocked the idea of the ‘sandwich recipe.’  I mean, you take some food that you like and you put it between slices of bread and that’s really the only recipe you need. 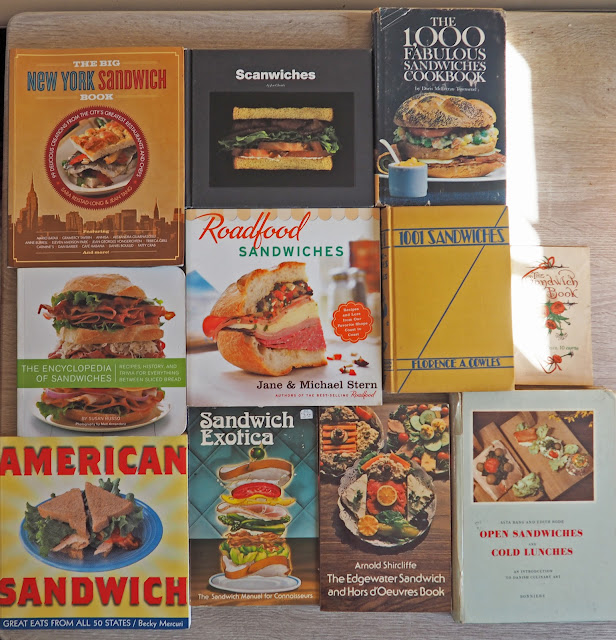 And yet and yet … this hasn’t stopped me forming (even curating) a small collection of sandwich books – many of them American, so there’s a lot of recipes for BLTs, Reubens, Po’boys and so on. And to be fair there is the occasional recipe in these books that I couldn’t imagine inventing, let alone eating, such as, in Sandwich Exotica, ‘the peanut butter-sardine and potato salad-lettuce on rye.”

So when I saw in the local charity shop the Encyclopedia of Sandwichesby Susan Russo, photography by Matt Armendariz, how could I resist buying it? 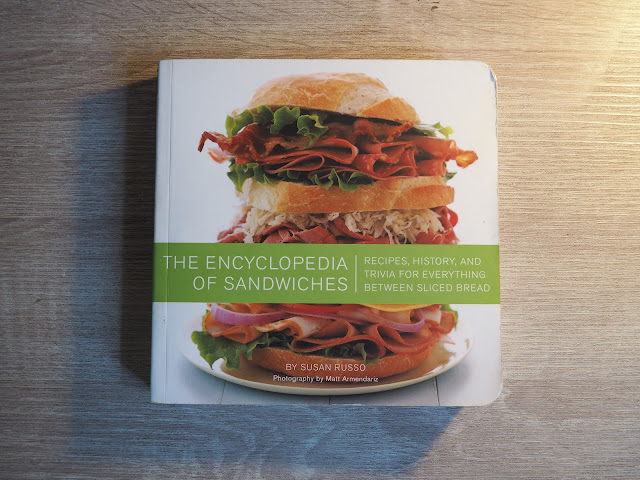 It’s American again – and contains such gems as how to make a ham sandwich – bread, ham, mustard or mayonnaise. Yes, really. 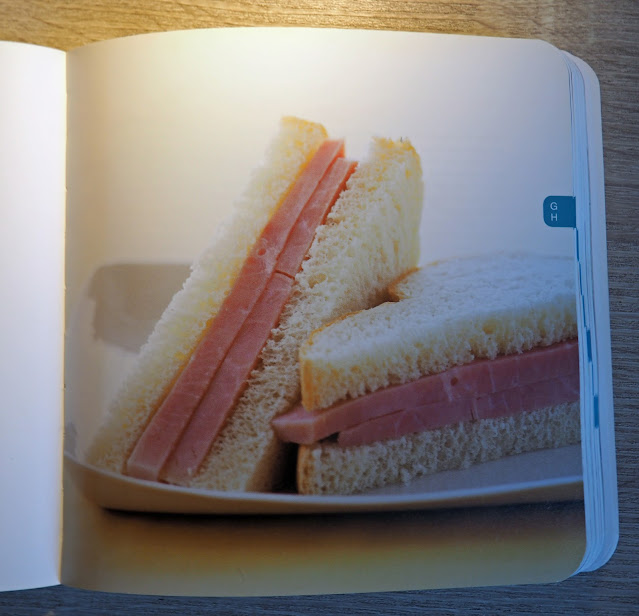 But hold your horses - there’s a recipe in there for a potato chip sandwich (that’s potato crisps to the British) which the author describes as ‘a crunchy salty guilty pleasure.’  I don’t generally do guilt when it comes to food, but in fact the potato crisp sandwich does strike me as slightly shameful.

But here Susan Russo comes up with a variation I again would never have dreamed of – ‘creamy peanut butter, 2 slices of white bread, 4 to 6 dill pickle chips, a layer of your favorite plain potato chips.’ 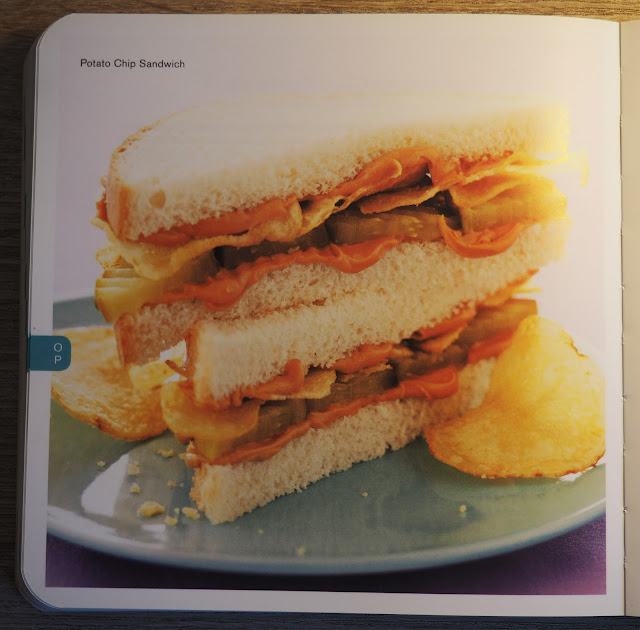 Well that sounded kind of dubious, so of course I had to make one.  I wasn’t sure I’d ever had a dill pickle chip so I used sliced pickle gherkins.  And I would probably have used crunchy peanut butter but the recipe called for creamy, so I went with smooth.  And I didn't have any acceptable white bread. 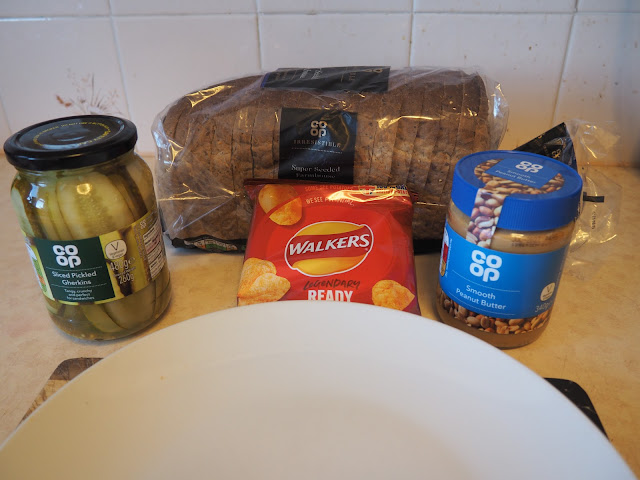 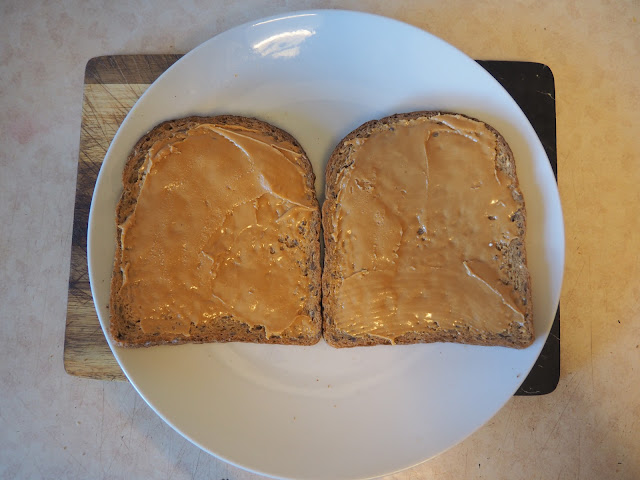 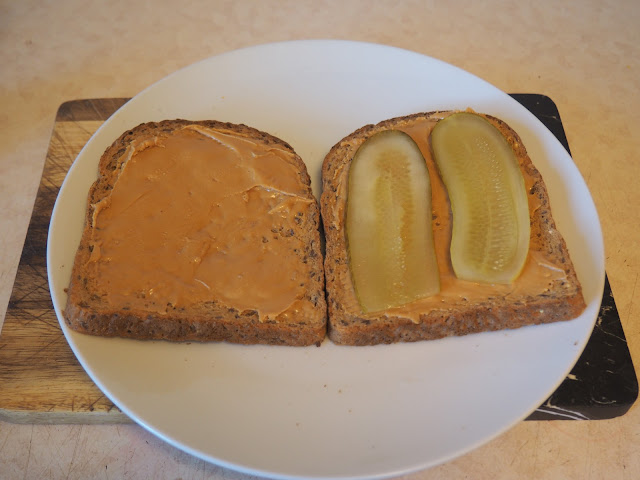 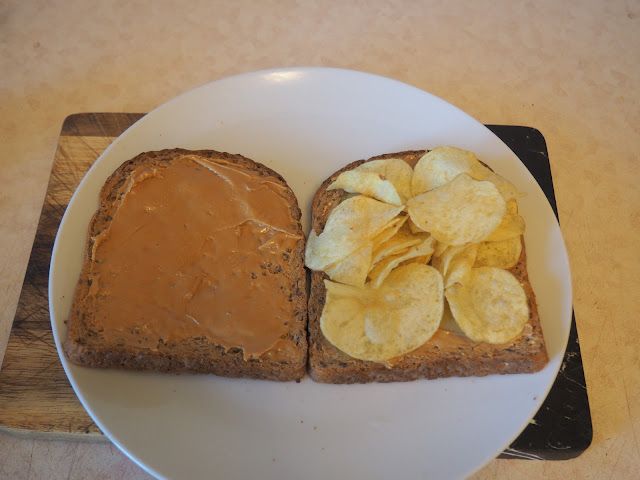 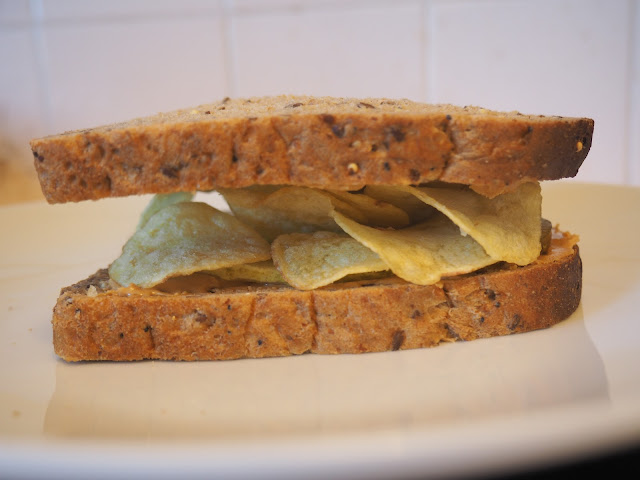 How was it?  It tasted just fine.  But I do wish I’d used white bread, and I think it would have been better if I’d used twice as much of all the contents.  All my own fault. We never stop learning about the sandwich.
Posted by GeoffNIcholson at 8:21 AM