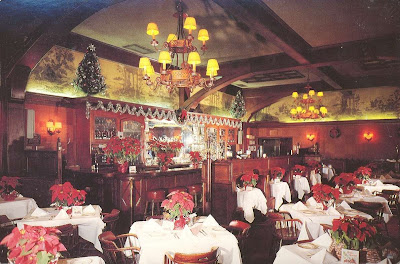 We went to Musso and Frank last night, which I’m pretty sure is my favorite restaurant in Los Angeles.  Not so much for the food, although their steaks and fries are very good, but more for the general ambiance, and the cool guys behind the bar and the history – knowing that you’re eating and drinking where the likes of Chandler, Hammett, Faulkner and Bukowski have all drunk, and sometimes been very drunk. 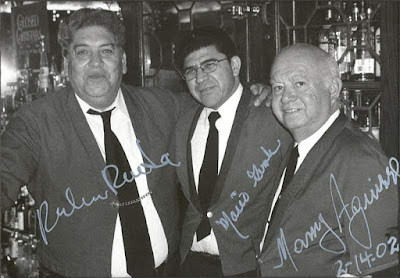 Musso and Frank proudly proclaims it’s the oldest restaurant in Hollywood and it always puzzled me that it opened in 1919, the year Prohibition started.  Surely that would have been a very bad year to open a restaurant in Hollywood.  But I’ve just been reading a fascinating new book by Leo Braudy titled The Hollywood Sign.  He tells us that Hollywood was actually founded as a dry community.  It was meant to be a model of temperance and good behavior as opposed to all the bad stuff that went on in rest of LA.  And, says Braudy, Prohibition was actually responsible for destroying Hollywood’s status as an oasis of decency.  Once drinking was banned everywhere in LA, indeed everywhere in the country, Hollywood was no different from, and no better than, anywhere else.  It couldn’t claim any high moral ground on the basis of not selling alcohol. 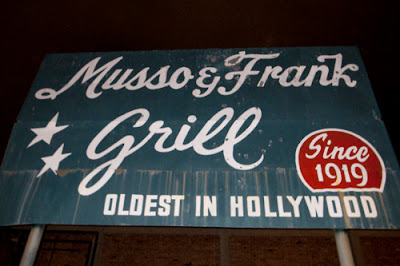 So in that sense 1919 was probably as good a time as any to be opening  a restaurant in Hollywood.  In LA Weekly’s Best of LA 2010, the blessed Jonathan Gold sang the praises of Musso’s “Best Jellied Consommé (1919)” but I’d never eaten it, and since I still haven’t quite shaken off my jelly obsession I ordered it last night.  I didn't take a picture because I didn't want to look like a tourist.
Gold describes it “a trembly, delicate substance, served in a custom-purposed silver-plate contraption that suspends the aspic above a goblet of crushed ice.”  Well last night it came without any silver-plate contraption and was served in an ordinary crockery bowl, though it was certainly trembly enough.  I’m not sure it was exactly great but I was very glad I ordered it because I’m not sure when I’m next likely to be a restaurant that serves it. 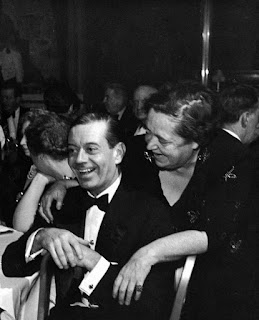 I understand that the Connaught restaurant in London used to serve something called Consommé en Geleé Cole Porter, and if it’s good enough for Cole Porter it’s definitely good enough for me.  According to a recipe in the Saveur archive it came garnished with carrot, kohlrabi and haricots vert, which I think Musso and Frank would consider a bit fancy.  In any case the Connaught restaurant has been all Frenchified and I think they  wouldn’t consider it fancy enough.
As it happens Gourmet Live, for which I occasionally write, has a new editor, Kate Sekules who is a food and travel writer, and a pugilist.  A little light Googling took me to the website daniellespencer.com a deeply curious art website which has a section on Jell-O turkeys from (apparently) a series of annual Jell-O turkey competitions.
Kate Sekules was one of the winners of the 2009 competition.  Her entry was “The Sides as the Bride” and looked like this: 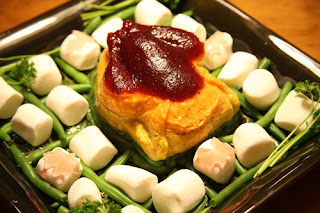 And it was described thus: “This turkey, composed of classic Thanksgiving side dishes, upends the traditional hierarchy of the meal, sublating our normative binarisms. Its operation evinces derridian différance, effectively deconstructing turkologocentrism.”  Go pick the ironies out of that one.
But my favorite Jell-O turkey was this one by Cindy Sherman, yes, THE Cindy Sherman, I think, which was called “Jiggles” and made from (and I’m quoting) “white chocolate with chopped candied walnuts filled with cranberry/pomegranate flavored gelatin (no added sugar) with raspberries.”  It looked like this: 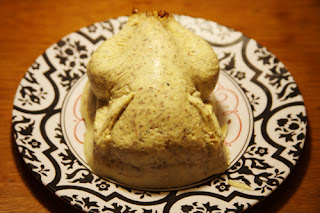 There’s a fairly obscure musical number by Cole Porter titled “What a Priceless Treasure” which contains the following absolutely wonderful lyrics
Let me taste the consommé.
Have a care, don’t let it jostle.
As dear Hollywood would say.
It’s terrific, it’s colossal.
And of course there are also these Cole Porter lines “You’re the Top”
You're sublime,
You're a turkey dinner.
It’s even better because he rhymes it with “Derby winner.”  They don’t write ‘em like that any more. 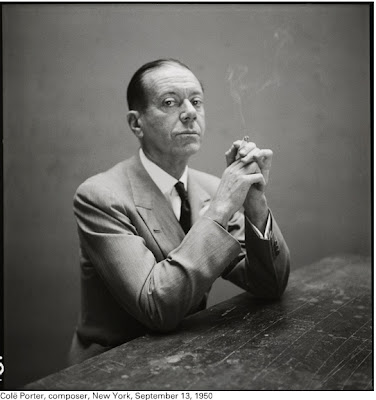 Posted by GeoffNIcholson at 5:30 PM