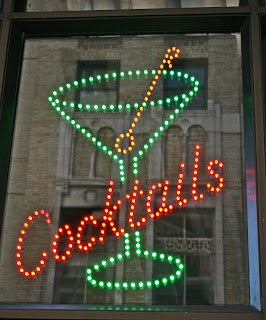 I used to think I liked cocktails.  And back in the day when I fancied myself as a playwright I thought I’d come up with a wonderful dramatic device for a play.  There’d be a bunch of people staying together in a house for the weekend and one of them, a minor character I suppose, would be trying to invent a new cocktail and every now and then he’d appear from offstage bearing a cocktail shaker full of his latest experiment.  As the play went on he’d get drunker and the cocktails would get ever more revolting.  It seemed like a good idea at the time. 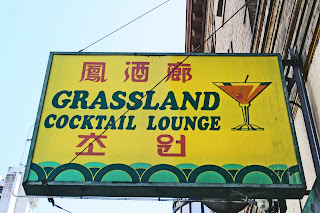 But the truth is, I now think almost all cocktail are revolting.  Oh sure I can knock back a bloody Mary or a gimlet, and I was in a bar in New York last year and had something called a Herb Albert, which was a variation on a margarita, with jalapeno infused tequila and fresh oregano, and all these drinks are perfectly drinkable.  But the truth is, when it comes right down to it, I only really like one cocktail and that’s the martini. 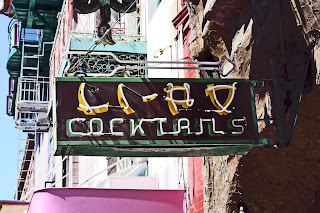 Now, readers of Psycho-Gourmet will hardly be surprised to learn that I also enjoy a good piece of bit of pulp noir fiction, and when I bought a 1947 novel by Henry Kane with the title Martinis and Murder it seemed like a convergence made in heaven. My expectations were high, and they didn’t even fall too much when I discovered the book had originally been published as A Halo for Nobody.  Certainly the jacket shows evidence of martini drinking and (possibly) its after effects. 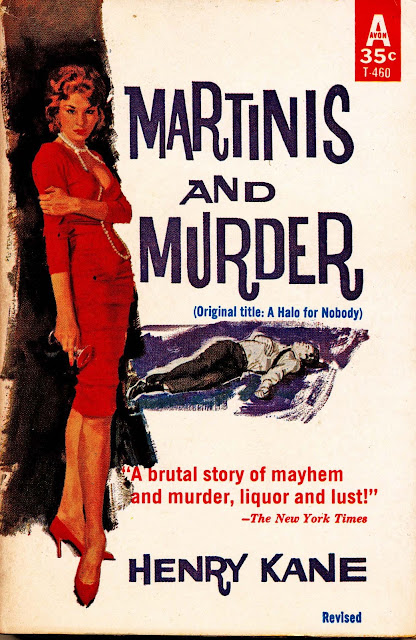 But it turns out the book itself is entirely martini-free.  Sure, a lot of boozing goes on as characters regularly knock back beer, rye, bourbon, sidecars and even some sherry.  But the legendary silver bullet never passes anybody’s lips.  I felt cheated.
Well, actually, to be absolutely honest, I didn’t feel as cheated as all that, since as with so many pulp novels I never really expected the words in the book to live up to the title or the cover image.  The book did at least contain some exotically named characters such as Joe Pineapple and Xavier Hoy Ginsburg.  But then things suddenly got a lot better.
I looked up Henry Kane and his work on various pulp websites and discovered that some of his books, including Martinis and Murder had been published in Holland.  And there it was, the Dutch title that suddenly made everything all right: Cocktails en Doodslag.  It really doesn’t matter what the book’s about, does it? 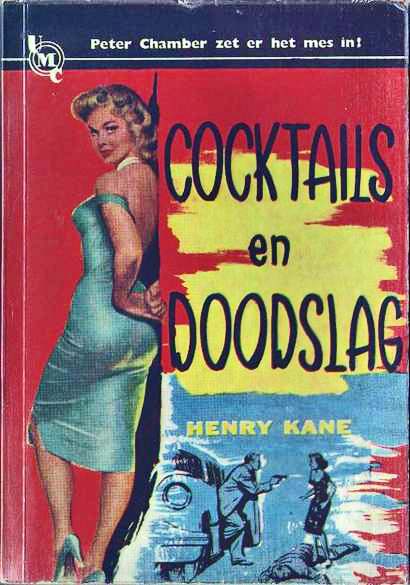 Posted by GeoffNIcholson at 12:14 PM