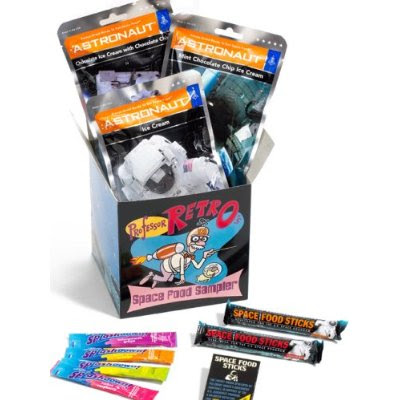 That all seemed a bit frivolous to me, like the stuff you’d give out at a kids party. Is space ice cream really going to be any different from earth ice cream? Is there really anything very extraterrestrial about bottled water that tastes of grape? And just as a matter of historical interest, when did space flight become “retro”? 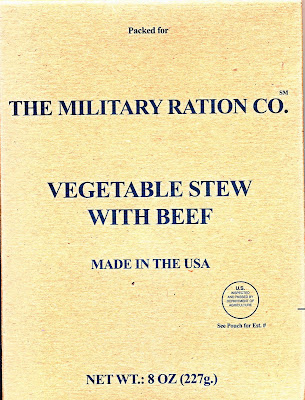 I wanted something more serious: dehydrated cubes of bacon, stew in a tube, that kind of thing. I didn’t find any on line but I did go to my local army surplus store, the Supply Sergeant on Hollywood Boulevard, and I found they stocked military rations, manufactured by the Military Ration Company of Gardena, California. This seemed as close as I was going to get to space food: not very close. I chose the Vegetable Stew with Beef, which came in a sober-looking cardboard pack, sealed inside a plastic bag, along with a cookie, a power bar an energy, instant coffee, matches and so on. 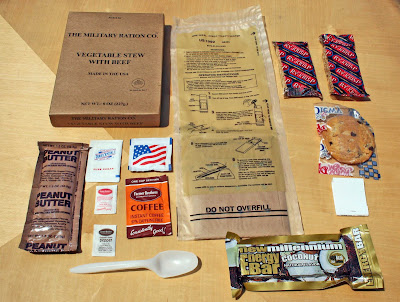 The bag also contained a kind of single use stove, which is either very low tech or very high, I’m not sure which. The instructions say, “heater and its byproducts are not intended for human consumption,” which seems an odd way of putting it. OK, they’re not intended for human consumption, but it doesn’t actually say you can’t eat ‘em, does it? You need a stove because the stew comes in one of those foil pouches. I confess I boiled mine in a saucepan in the kitchen. And the result looked like this. 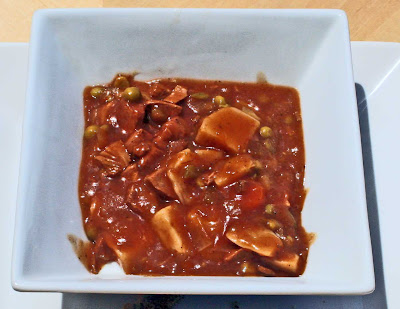 The stew really wasn’t bad at all. There was more meat than I was expecting, given the name, and although the vegetables were a bit soft and formless, overall it was actually pretty tasty, and why not given that the list of ingredients included beef flavor, tomato paste and Worcester sauce? If there was any complaint it was that there really wasn’t very much of it, and it contained just 160 calories, which I‘d have thought was a bit skimpy if you were a hungry soldier. I guess you energize yourself with the power bar.

Now it so happened that a few days later I went to the local Indian supermarket, India Sweets and Spices, on Los Feliz Boulevard, a fantastic resource for bulk spices, chutney, pickles and dried fish. And I saw some packeted dishes, including this one; Mutter Panner, or Splendid Cheese Peas, as somebody at Kohinoor Foods of New Delhi has translated it. 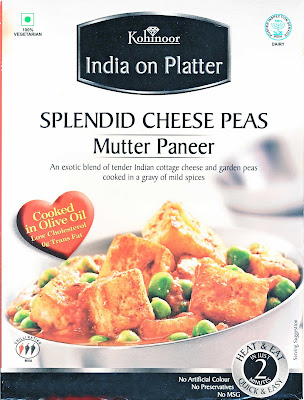 I got it home, opened it, and there was a pouch, pretty much identical to the one used in the military ration. I boiled it up. Now nobody can really expect boil in the bag curry to be especially authentic, and this certainly wasn’t. Despite the cumin, fenugreek, black and green cardamom, the green and red chilli, it tasted pretty bland. It also, of course looked nothing like the image on the pack – a problem the Military Ration Company had wisely sidestepped. 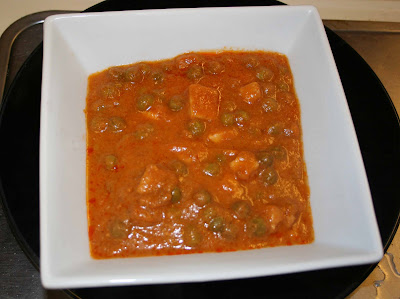 Maybe it had something to do with lower expectations, but it seemed to me the military guys had made a much better job of their stew than the Indians had made of their mutter paneer. This seemed a sad thing. And I was actually made sadder because I’d just been to a really poor Indian restaurant in San Diego, and it wouldn’t have surprised me at all if their food hadn’t come out of boil in the bag pouches.

So then, just to round things off, I found myself in my local Jon’s supermarket, browsing among the unusual canned goods and I found this: Army Brand Officer’s Pork Loaf, a product of Poland. It was the camouflaged label that really attracted me. 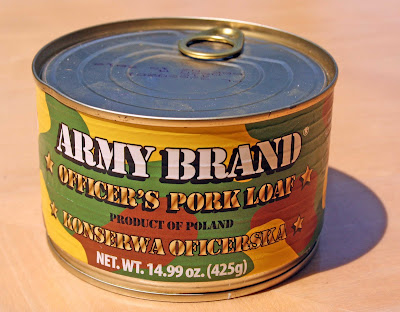 Now I can’t guarantee that Polish army officers actually eat this stuff but I felt I had to know what it tastes like. And the answer is, again, surprisingly good. Ingredients include pork meat, pork skins, pimento, paprika and marjoram. 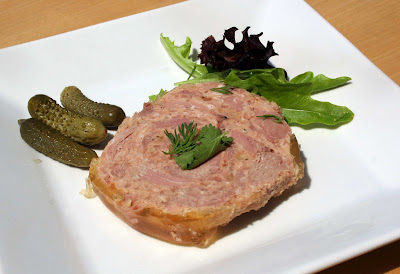 I admit it looked kind of unappetizing coming out of the can, but with a little dressing up of leaves, herbs and cornichons it looked a whole lot better. And it struck me that if you were an unscrupulous restaurateur, you might serve this up as an example of a little known and highly prized type of charcuterie. Hey, it wouldn't be the worst thing you've eaten in a restaurant.
Posted by GeoffNIcholson at 3:37 PM