I’ve been reading the unimproveably titled “Memorials of Gourmandising,” an article written in 1841 by William Makepeace Thackeray. That’s him above, with wife and son. In the article he asserts that not only are the English superior to the French, morally and martially, but also physically. He’d got it into his head that the English were a big brawny race, wheras the French were a bunch of weeds. He writes thus, addressing his fellow Englishmen:

“I say to you that you are better than a Frenchman. I would lay even money that you who are reading this are more than five feet seven in height, and weigh eleven stone; while a Frenchman is five feet four and does not weigh nine. The Frenchman has after his soup a dish of vegetables, where you have one of meat. You are a different and superior animal — a French-beating animal (the history of hundreds of years has shown you to be so); you must have, to keep up that superior weight and sinew … simpler, stronger, more succulent food.”

Thackeray’s opinion may have had something, though surely not everything, to do with his being 6 feet 3 inches tall, an exceptional height for a man of the mid nineteenth century. But conflating nationality and nutrition in this way seems just plain dumb, and I wonder in fact whether he’s actually objecting to the French love of salad. Elsewhere in the piece he seems to be reasonably pro-vegetable. 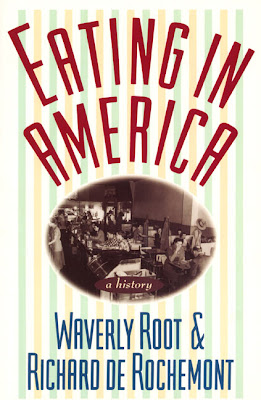 I was reminded of something in “Eating in America” by Waverley Root and Richard de Rochemont, that runs, “A significant passage in Frederick Law Olmsted’s ‘Seaboard Slave States,’ a product of his travels of the 1850s, suggests that slaves may have enjoyed a better balanced diet than that of many whites … Some owners encouraged the Negroes to grow vegetables for themselves … because they discovered ‘negroes fed on three-quarters of a pound of bread and bacon are more prone to disease than if with less meat but with vegetables.’ It did not occur to the masters to draw any conclusion from this empirical observation for their own benefit.” 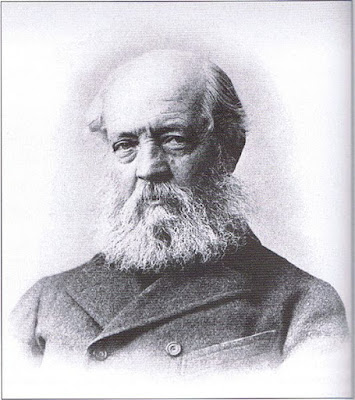 The full title of the book is “A Journey in the Seaboard Slave States;  With Remarks on Their Economy.” Olmsted traveled through the American South and Texas between 1852 and 1857 and sent back reports to the New York Daily Times (which would become the New York Times). The reports were later collected and published in book form. Olmstead was against slavery, though he was a long way from being what we’d currently recognize as a liberal.

It turns out the person speaking in the above quotation is not Olmstead but one Mr. M. W. Phillips, who Olmsted describes, unironically as far as I can tell, as “an ardent and constant writer on agricultural economy, in connection with Slavery, and a most philanthropic man, writing to the New York Tribune, for the very purpose of proving that the condition of the slaves is better than that of free-laborers.” Phillips was a slave owner, in other words, though he claimed to run a “model plantation” and what he said, in full, is as follows:

“We might make more money by a different treatment, and we might spend more money on our negroes, if we would listen to questionable friends ... I have examined much into the treatment of slaves, having, some twenty years ago, practiced medicine, with an opportunity to see how different diet and treatment affected health. Half pound of sound bacon, with vegetables and bread in plenty, and cistern-water, is, in my opinion, a certain preventive of disease; but the cook must be watched, and water carriers noticed. Negroes fed on three-quarters of a pound of bacon and bread are more prone to disease than if with less meat, but with vegetables.”

Yes, yes we get it: he could spend more money on his slaves’ diets if he chose to, but it’s simply better for everybody if he doesn’t. Saving money coincides perfectly, and conveniently, with the health of his slaves. Everybody wins. Olmstead certainly does nothing to challenge this opinion. Perhaps he’s giving Phillips enough rope to hang himself, but I don’t think so. 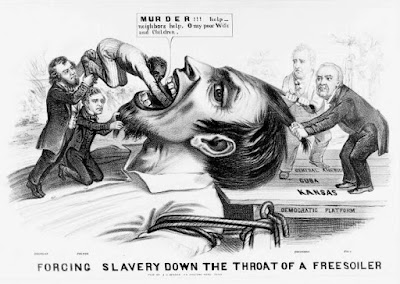 In Louisiana, Olmstead also interviewed an unnamed slave. The man says he has been sold twice so far in his life, and if he has to be sold again, he’d rather it was to an American than to a Frenchman. Why? Because the French, he says, didn’t feed their slaves well. Olmsted’s passage runs like this: " ‘Why, sometimes, massa, dey only gives 'em dry corn--don't give out no meat at all.’ I told him this could not be so, for the law required that every master should serve out meat to his negroes. ‘Oh, but some on 'em don't mind Law, if he does say so, massa. Law never here; don't know anything about him.’”

Thackeray wouldn’t have been at all surprised at the meatless feeding habits of the French. But actually, Thackeray wasn’t always as humorless as his remarks about the French might suggest. Having traveled to America for the first time and eaten his first American oyster he wrote, “I thought I'd swallowed a small child." Who wouldn’t enjoy that?