Only once, as far as I know, have I ever been refused service in a restaurant because of my ethnicity.  It was back in the day, in Brixton.  My hippyish girlfriend and I went into a Jamaican restaurant, sat down, and a West Indian waiter approached the table, a large man who in other circumstances might have appeared quite avuncular.  He towered over the table and said calmly but sternly, “We don’t serve white food.”  Of course, what he really meant was “We don’t serve white people,” but we were happy enough with his use of euphemism and we went, all too meekly, on our way.  I wish I could say we went to the eel and pie shop, seen above, but we didn’t.

Well, times have changed in old Brixton town.  The place seems to be an all-inclusive foodie heaven, largely because of the Brixton Village Market.  I went there with my pal, Jason Oddy, a top photographer, and about as far from being a “food photographer” as you could easily imagine, though his work does show food once in a while, as in this picture from his series of interiors of the homes of the recently deceased. In Brixton he selected KaoSarn, a Thai café (more seats outside than in, bring your own booze, no toilet but an arrangement with the nearby pub) which gets some stunningly good reviews.  Time Out says the grilled half chicken with som tam “propels you right into the streets of Chiang Mai, the Northern Thai city that this dish originates from.”  We had some deep fried vegetables and pad thai and it was all pretty decent, even if we weren’t transported very far from Coldharbour Lane. 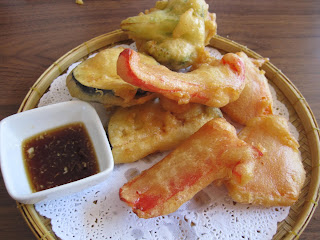 The staff were, in the main, Thai and female, and a brusque lot they were too, except for one of them, the most charming and friendly by far, who (we were pretty sure) was a ladyboy, or perhaps, given a certain maturity, a ladyman.  I’m not sure how she’d have been received by the local community back in the day, but here and now she fitted right in.
*
Next day I went to Woking – I had my reasons - which included walking on  Horsell Common, partial setting for H.G. Wells’ War of The World. Woking seemed amazingly prosperous, and many of the food options were a bit too “nice” and/or gourmet, or in some cases corporate.  I hadn’t gone all that way just to eat in a Pret A Manger.  So I found an old school sandwich shop and bought a Cheese Salad Bap, which I took to the common and arranged in this winning still life. 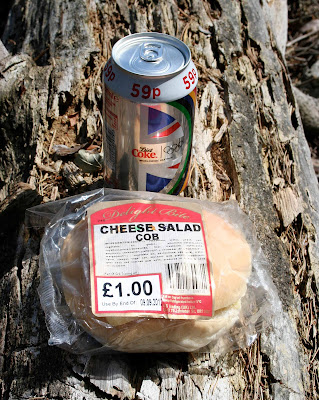 Then I opened the cellophane and examined the sandwich.  It consisted of a thin slice of processed cheese, a thick smear of margarine, and a sad lettuce leaf.  I took a bite.  It was the foulest thing I’ve had in my mouth in a very long time.  It certainly did seem like very “white” food in some sense, perhaps the kind of thing you might have bought from the back of a van, in a layby on the  A1, sometime around 1962.  Reader, I did not finish it. 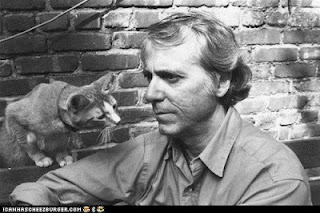 And then, just a couple of days later I was reading Don DeLillo’s novel Point Omega, a wonderful book about (among other things) time, war, lost ideals, absence, and extinction, which contains these remarkable lines:
“Lunch was movable, flexible, eat when and where you want.  I found myself at the table with Estler, who examined the processed cheese that Jessie had bought on our last trip to town.  He said it was colored with spent uranium and then he ate it, slopped with mustard, between slices of prison bread, and so did I.”
You know, I still really can’t decide whether slopping my Cheese Salad Bap with mustard would have made it better or worse.

When he speaks of “spent uranium,” I assume he’s thinking, or at least he makes me think, of yellow cake uranium, which as I understand it, is not in fact spent, but rather on the way to becoming a substance that can be used in nuclear reactors and bombs.  Nevertheless, at least in the photograph below, it does look strangely appetizing: I’ve definitely had worse things in my bap. 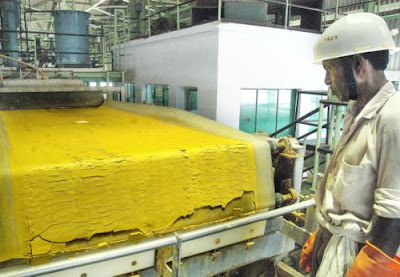 Posted by GeoffNIcholson at 10:16 AM