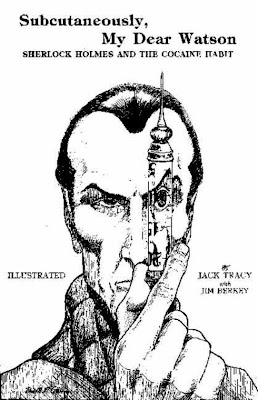 Sherlock Holmes, perhaps like quite a few coke users, seems not to have been particularly interested in food.

In The Adventure of The Norwood Builder Dr Watson tells us, “My friend had no breakfast for himself, for it was one of his peculiarities that in his more intense moments he would permit himself no food, and I have known him to presume upon his iron strength until he has fainted from pure inanition.”

Nevertheless there are at least four Sherlock Holmes cookbooks. The one I own is called The Sherlock Holmes Victorian Cookbook, by William Bonnell, a source of much amusement, not all of it intentional.

We know that Holmes and Watson were fans of Simpsons in the Strand and that Holmes and brother Mycroft went to the Diogenese Club, but it’s hard to find a detailed description of an actual Holmesian meal.

The best, and it’s the only one that Bonnell can really come up with, appears in The Adventure of The Noble Bachelor in which Holmes and Watson sit down to a “quite epicurean little cold supper” featuring “a brace of cold woodcock, a pheasant, a pate-de-foie-gras pie, with a group of ancient and cobwebby bottles.” 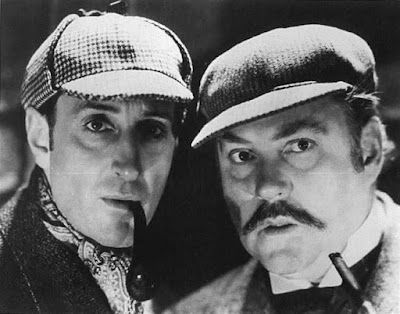 The Sherlock Holmes Victorian Cookbook doesn’t give us recipes for any of these things. Instead, the author proceeds by way of free-association. So, in The Adventure of the Devil’s Foot there’s a mention of Cornwall, and then we get a recipe for Cornish pasties.

In The Adventure of the Golden Pince-Nez Holmes says that he and Watson are “famous fishermen” and Bonnell gives us a recipe for Hot Pickled Salmon.

Holmes and Watson often travel by train, therwfore we’re given a recipe for Railway Journey Egg Sandwiches. Apparently the Victorian often used a slice of toast for sandwiches, slit open as if it were pita, which OK I admit is surprising and interesting.

But my favorite hoot is in the intro. Bonnell speaks of the housekeeper Mrs. Hudson, “Did she also offer them haggis, the oatmeal and internal organ mixture prepared in a sheep’s stomach, during Hogmanay?” he asks. And then concludes, “Perhaps not.” So why trouble us with the speculation?

Is he mocking the haggis here? Or does he simply know that others will? I hope not. I have enough Scottish ancestry to be resentful. Haggis is really good. And if you’re prepared to eat an American hotdog a haggis will contain no new horrors. 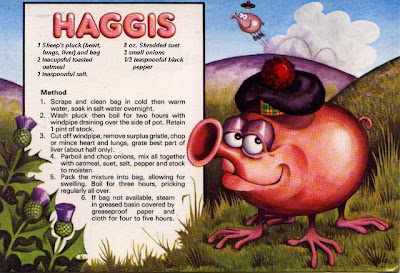 Still I have to accept that foods from other cultures are a source of low comedy. And even my beloved Simpsons mocks English food – I don’t object to the mockery I just don’t want it to be too easy. I suspect somebody somewhere is writing a PhD on the Simpsons and food even now, it’s a huge area, but I’m thinking here of the Four Beheadings & A Funeral episode, and the search for the Mutton Chop Murderer - a Sherlock Holmes parody in which the killer is caught because the murder weapon smells of eel pie. 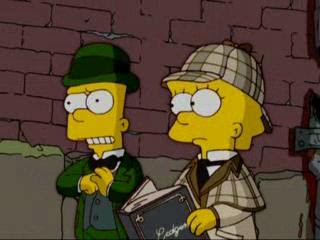 When I first lived in London I knew there were such things as eel and pie shops, and I assumed they sold eel pies. In general they don’t. They sell eel, and they sell meat pies. Why not eel pies? I don’t know. A case for Sherlock.
Posted by GeoffNIcholson at 7:25 PM