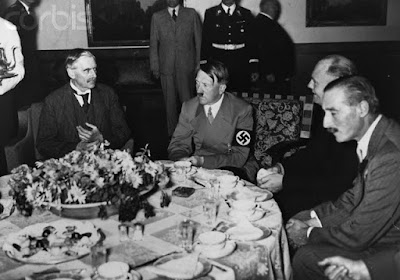 I used to know a fairly loathsome, angry man in London who eventually realized just how loathsome other people found him, and how angry he actually was, and so he took some anger management classes. Part of his “cure” was to give up meat and become a vegetarian.

People, some of them way less cynical than me, said, “Well, it sure worked for Adolf Hitler.”

Last week the auction house of Mullock’s sold an intelligence report, written by a British agent in 1945, summarizing the interrogation of a German prisoner who’d been a staff member with Hitler in Berlin, and who claimed to have eaten with him at least thirty times. Nobody seems to have doubted the claim.

The German prisoner, known as PW, reported that Hitler ate a "frugal meal" at 2 in the afternoon and then had a "post-prandial nap." In the evening, at 8, he’d have his main meal which consisted of vegetable stew followed by stewed fruit.

Hitler ate this very quickly in just a few minutes (well you would, wouldn’t you?). But, according to the prisoner's account, “the entire meal usually lasts two hours.’

These must have been long nights for all concerned.

*
There’s a story, not necessarily apocryphal, of an occasion when Hitler was undergoing some medical tests and his doctor collected a quantity of Hitler's blood in a glass beaker. Hitler, apparently, said something like, “All you need now is some is pork fat and then you’ll be able to make Fuhrer blood sausage.” 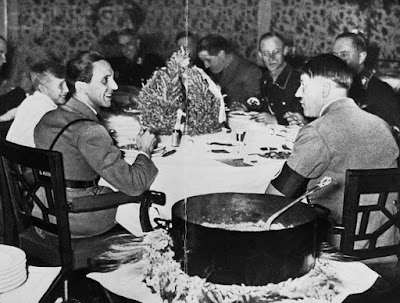 The picture above shows Hitler eating with Goebbels at a "Fintopf" – a single pot supper.

The picture was taken in February 1945 and the original caption in the English press said they were “stewing in a pot of hate.” Undeniably true, yet they look oddly cheerful to me. I've certainly been at much less happy suppers than this one appears to be. Hasn't everybody?
Posted by GeoffNIcholson at 7:02 PM