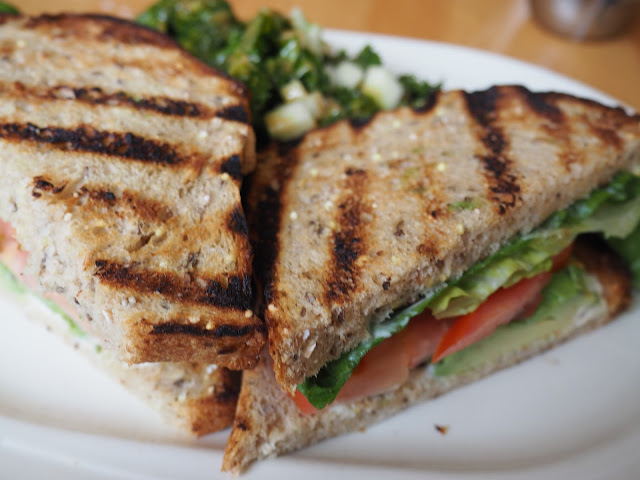 Just another sandwich in a lifetime of sandwiches.  This one’s an “ALT” - not "alternative" as I first imagined, but avocado, lettuce and tomato - at the Beachwood Café, Hollywood (very possibly even Hollywoodland). 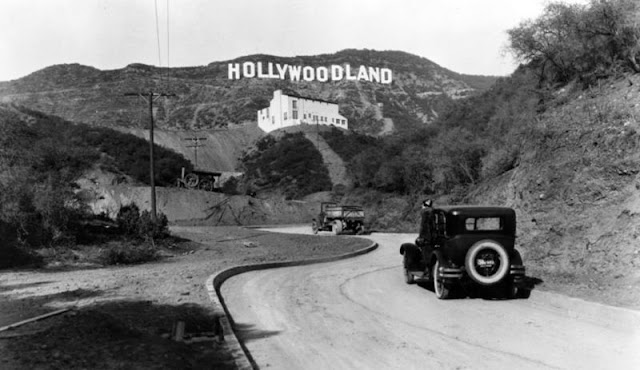 They have a real nice floor. 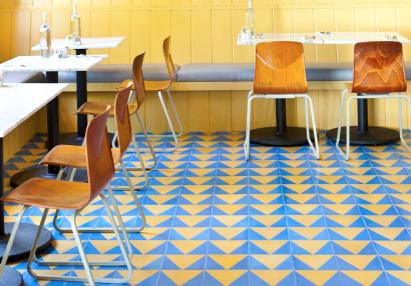 Posted by GeoffNIcholson at 9:31 AM No comments: Links to this post

Last week I went to Orochon Ramen, a somewhat famous (I mean it’s appeared on some foodie TV) show, a Japanese restaurant in Little Tokyo, and I had a big bowl of ramen with salt broth, as you would.  But there on the appetizer menu was “spicy sausage,” and that obviously couldn’t be passed up, since it seems to me that the Japanese know a thing or two about sausage.  It came like this: 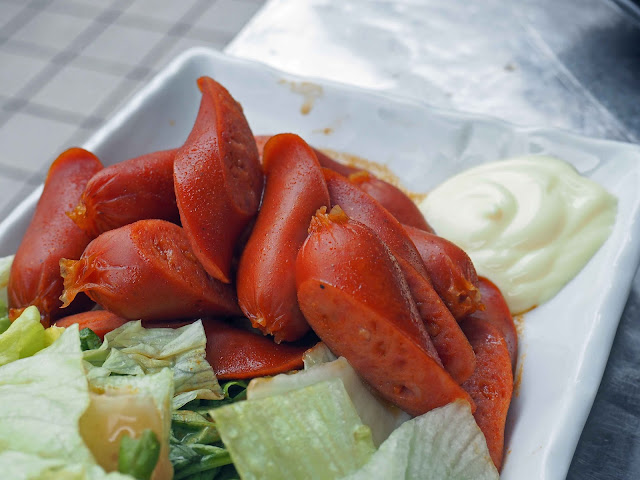 Looking and in fact tasting very much like a hotdog but not exactly, having more texture, being far less homogenized than a standard issue hotdog, and it was in some kind of sauce, which I guess is probably where the spiciness came from, though not a whole lot of it.  It wasn’t exactly a highpoint of the sausage maker’s art, but I’m glad I had it. 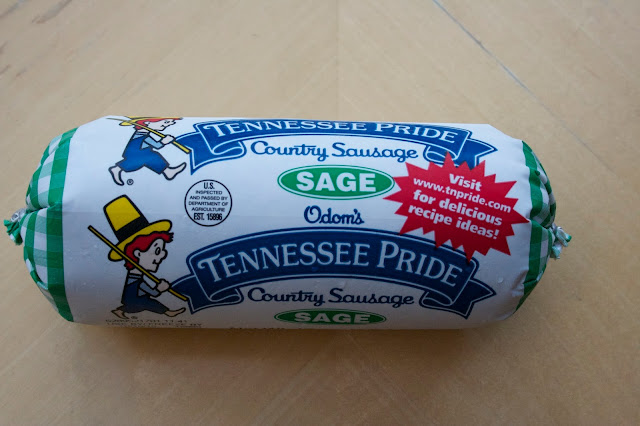 Anyway this got me back on the sausage trail.  A year or two ago I was in a little supermarket in Nowheresville, Nevada, and found they were selling Tennessee Pride sausage, which I’d had recommended to me by both real and adopted southerners, so obviously I had to buy some.  It looked like this as it was cooking.  Mmm – sagey. 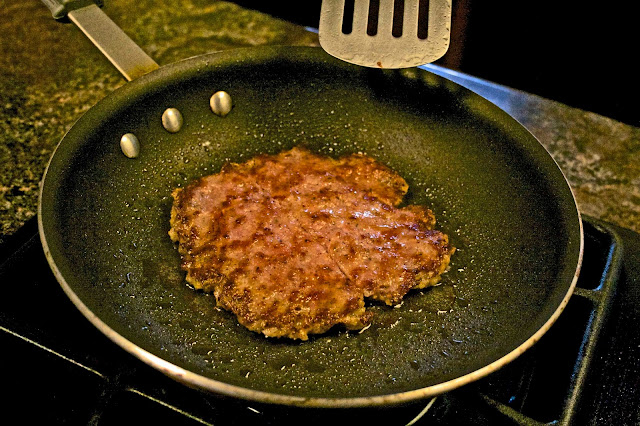 But then a couple of weeks back, a visitor from Alabama, passing through and seeking to ingratiate herself, brought this version of Tennessee pride with her: 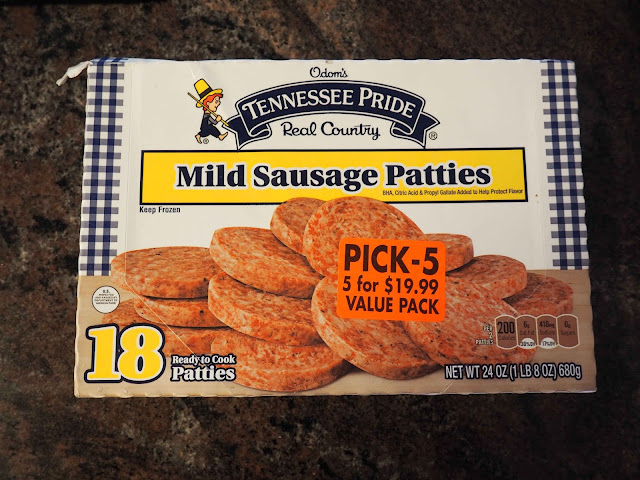 Less than five dollars a pack, 18 patties per back – we’re talking affordable! All else being equal, I probably wouldn’t have chosen the mild – but this is not a pony to be looked in the mouth. 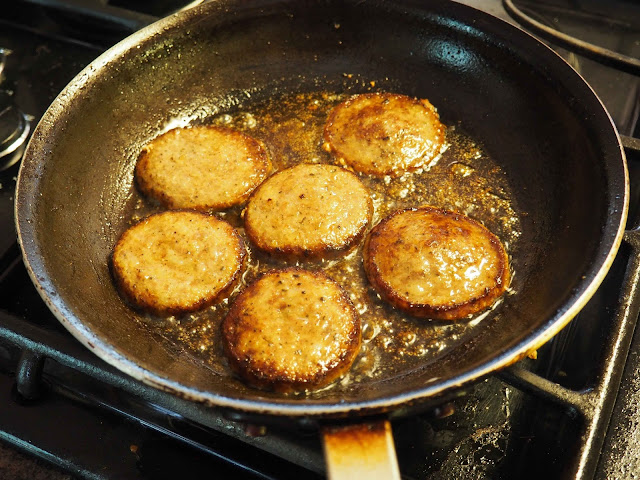 And then to round off the week, in the local “ethnic” supermarket, they had morcilla; as near as you’re likely to get to black pudding in this town.  I like morcilla a lot but they proved tricky to cook. 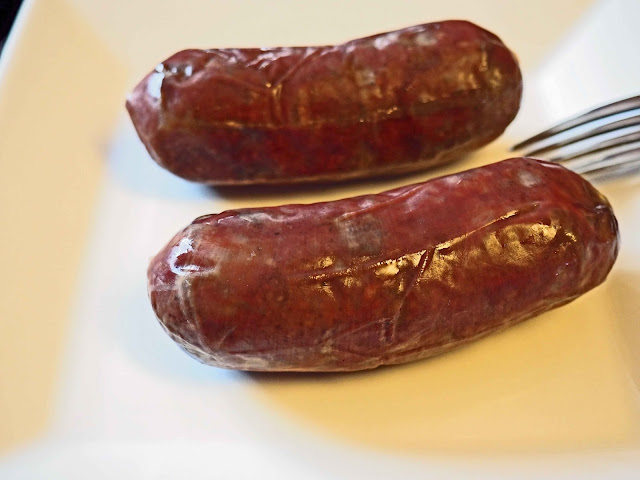 I tried to cook them whole in a frying pan which was probably a mistake.  The chances of getting them good and hot before they collapse and wriggle out of the skins is pretty low. 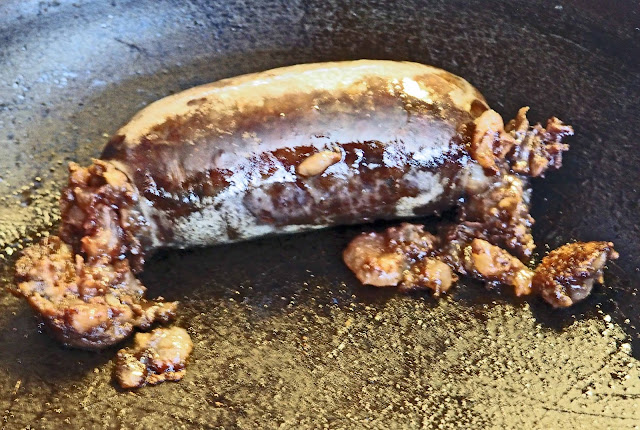 In fact, I miscalculated and mine were still semi lukewarm when I put them on the plate – so then I had to go back stick them in the microwave.  They didn’t completely explode but the inside of the microwave did need cleaning afterwards.   Still …  see that pork fat?  Well of course you do?

And naturally this morcilla brought back thoughts of the black puddings of yesteryear, including the one I had not that long ago in Heathrow Terminal One, at Heston Blumenthal’s Perfectionist’s Café – a name that’s really asking for trouble.  It came looking like this with scrambled egg.
This black pudding (“from Stornoway!” says the menu) didn’t have as many bells and whistles as you’d expect from young Heston.  As you see above, it didn’t have nearly enough fat, either. 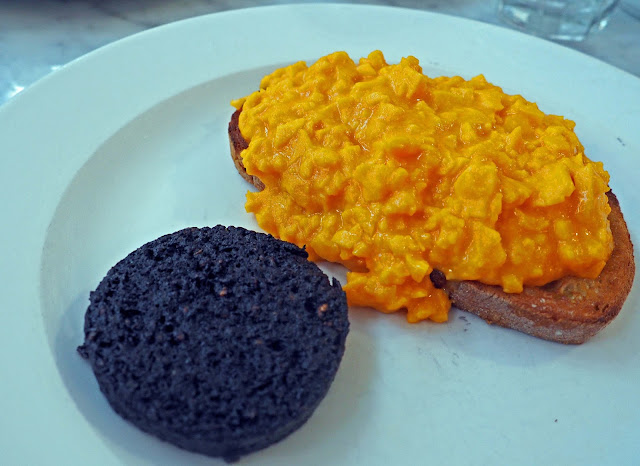 One of those little known facts that all foodies know is that quotes is that blood sausage is mention on the Odyssey.  It’s in Book 20, he’s thinking about how he’s going to kill all of Penelope’s suitors.
“Thus he chided with his heart, and checked it into endurance, but he tossed about as one who turns a paunch full of blood and fat in front of a hot fire, doing it first on one side and then on the other, that he may get it cooked as soon as possible, even so did he turn himself about from side to side, thinking all the time how, single handed as he was, he should contrive to kill so large a body of men as the wicked suitors.”

Yes – sausage can be metaphoric.  Or whatever the adjective is from simile. 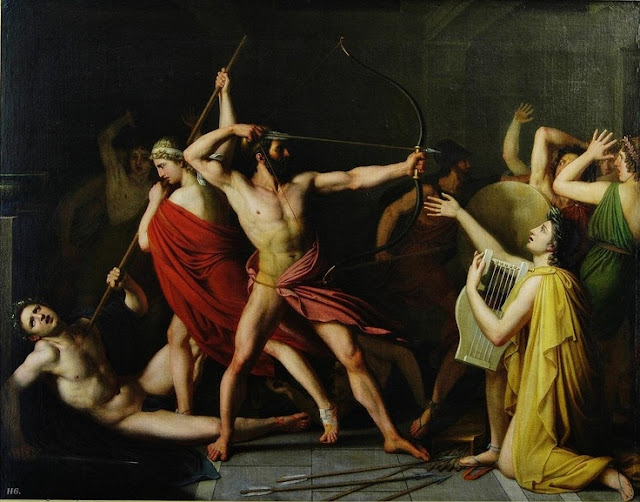 Posted by GeoffNIcholson at 5:28 PM No comments: Links to this post 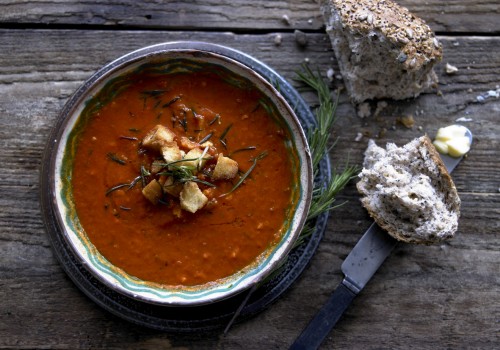 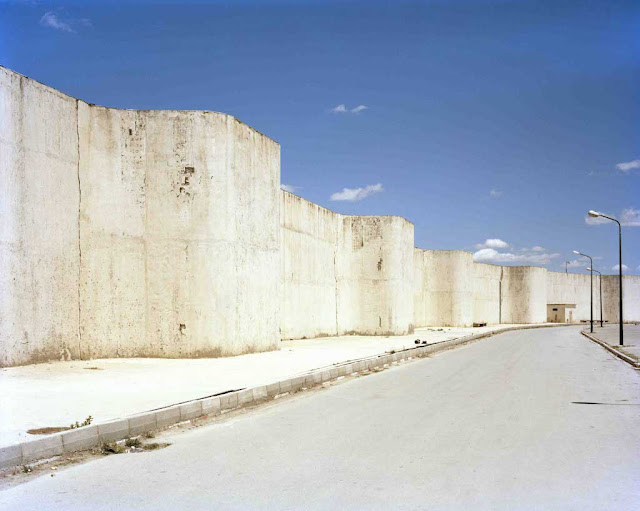 Posted by GeoffNIcholson at 8:28 AM No comments: Links to this post

PIE TO THE MAX

Gotta love a woman who likes pie and haggis, and especially when she eats them together in a haggis pie.  Although it must be said that in this picture young Nicola Sturgeon does seem to be sniffing it rather than actually eating it. 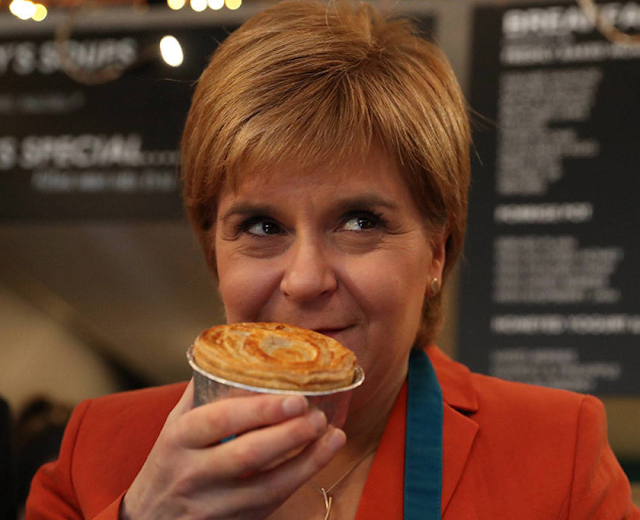 Posted by GeoffNIcholson at 10:04 AM No comments: Links to this post