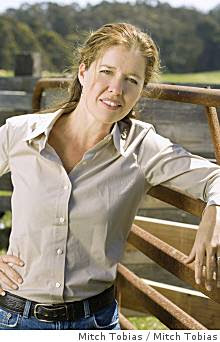 According to Upton Sinclair's "The Jungle," you can't stay long in a slaughterhouse listening to the "hog squeal of the universe" without becoming philosophical. "Was it permitted to believe that there was nowhere upon the earth or above the earth, a heaven for hogs, where they were requited for all this suffering?" he asks. To which the answer, if agribusiness has its way, is a resounding no.

I don't know if Nicolette Hahn Niman has read "The Jungle" - she may well have been too busy with legal reports and farming manuals - but she's certainly spent time in a slaughterhouse, and become suitably philosophical.

At the beginning of her book Niman is the young lawyer chosen by Robert F. Kennedy Jr. to lead the "hog campaign" within his environmental watchdog group, the Waterkeeper Alliance, using legal processes to combat the pollution caused by factory farming, and making local authorities enforce the laws that already exist. Niman admits that hogs were not her area of expertise: She was a committed vegetarian, though with no ethical objection to meat eating per se. She describes her steep learning curve, educating the reader as she educates herself.

In the best parts of the book she gives us a snapshot history of American agriculture and food production, showing how we moved from traditional farming methods to a situation in which animals are regarded and treated as an industrial product.

The book is full of astonishing and sometimes horrifying facts. If you want a crash course in the mechanics of feedlots, confinement pens and "manure lagoons," this a good place to start, though you're sure to learn things you'd rather not.

Will it surprise you, for instance, that when researchers from the University of Maryland sampled packages of ground meat, they found salmonella in 16 percent of the pork, 24 percent of the turkey and 35 percent of the chicken?

Did you know that the U.S. Department of Agriculture has apparently decided that chickens aren't really animals, since they're not covered by laws relating to humane slaughter? Consequently, Niman tells us, "spent hens are frequently vacuumed up into trucks and dumped into a rotating blade chopper ... while ... still alive and conscious."

Perhaps quite a few people are already aware that cattle, natural herbivores, are fed the bones, organs and skin of other animals, along with beef tallow, but surely it's a shock to discover that agribusiness is addressing the problem of excess manure production in cattle by feeding it back to them.

We go with Niman to hog factories of varying degrees of grimness, we share in her legal battles, but then halfway through the book her life takes an abrupt turn. She leaves the Kennedy fold after finding herself at odds with a new boss, and then marries cattleman Bill Niman, founder of the impeccably credentialed Niman Ranch. She rapidly progresses from observer to fully fledged participant, along the way becoming a passionate advocate of "ethical animal stewardship."

Niman never comes across as smug, and yet this idyll is the least interesting part of the book. Her story is further sabotaged when we learn what many readers will already know, that Bill Niman is no longer associated with the ranch that bears his name. The moneymen decided that the operation had to be run more like the rest of the meat industry, and Bill departed to raise goats and turkeys. The author calls this "an interesting twist," and I assume she's working under legal constraints; even so, I felt a bit cheated.

Still, the fact is, most of us are hypocrites when it comes to food. We say we want to eat well and ethically, we admit to qualms about modern methods of food production, but most of us would rather not know the whole story. We certainly don't want to be denounced and berated by fanatics. Fortunately for people like us there's Nicolette Hahn Niman, a generally sane and sympathetic character, pushing us gently but firmly in a direction we know we should already be heading.