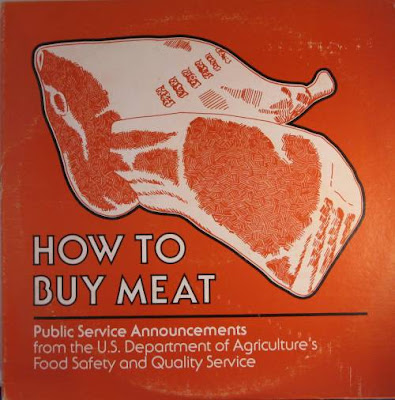 Sometimes when I think about meat I also think about art, and then I inevitably think about Meat Joy, a performance art piece by Carolee Schneeman, although since it was first performed in 1964 it was probably called a “happening” at the time.

For decades I thought this must be the sexiest, most perverse, most exciting spectacle ever. The received wisdom was that it featured naked people have sex while rolling around in raw meat. I liked the sound of that.

Now, thanks to youtube and a bunch of other sites, we finally get to see the damn thing, or at least some blurry footage of it. 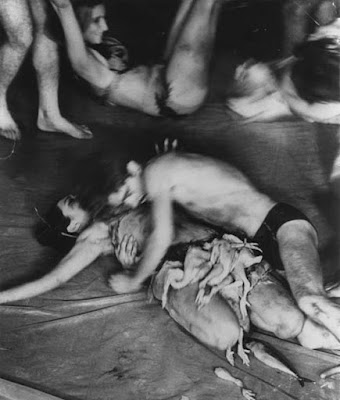 And you notice a number of things: that the people aren’t really naked at all - they’re wearing fur trunks and bikinis, as if they were in a caveman movie - which means of course that they’re not really having sex; they’re having interpretative dance. And most importantly, there really isn’t that much meat involved, certainly not enough to go round, and some of it’s chicken feet, and some of it (for Pete's sake) is fish. 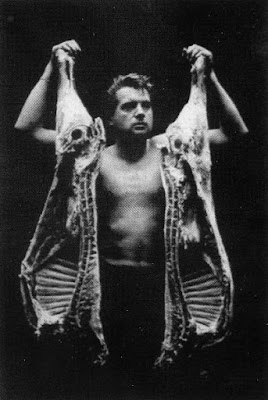 And maybe you want Mark Ryden. 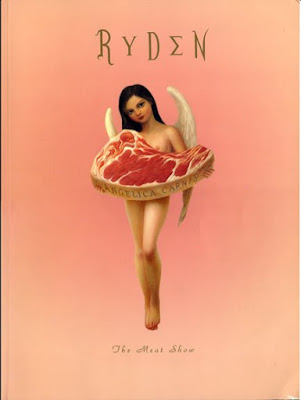 I once met Ryden at a party given by Benedikt Taschen. The catering was a very meaty affair, done by Jon Shook and Vinny Dotolo, the guys who had a Food Channel show where they were known as the Food Dudes and now run a bacon-positive restaurant in LA called Animal. I didn’t know it at the time but Ryden once did an exhibition called “The Meat Show: paintings about children, god, and USDA grade A beef.”

In a rather snotty, or perhaps faux-snotty, interview in Juxtapoz magazine he was asked, "What is this unholy fascination you have with raw meat?" And Ryden replied, “Brisket, chuck roast, Angus beef, lamb, chicken, and the other white meat. Meat: it's what's for dinner.”

I think that’s a pretty good answer, and I can’t begin to imagine why the interviewer thought there was anything unholy about meat. If I was in the business of starting religions (and don't worry, I'm not) I'd be very tempted to start The Church of God The Carnivore. But maybe Mark Ryden got there first.

Posted by GeoffNIcholson at 7:26 PM