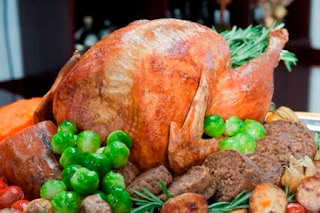 One Christmas when I was a kid, I woke on Christmas morning feeling really ill.  My family was of the “pull yourself together” variety when it came to illness but even they could see there was something wrong with me.
And as the time for Christmas dinner approached I didn’t feel much better and obviously I didn’t look it either.  Concerned relatives would look at me every once in a while and say, “Well I hope he’ll be able to have some Christmas dinner.  Maybe just a nice piece of turkey without any of the trimmings.”
And this was a problem, because if they’d known me better and if I’d have the nerve to tell them, the truth was I didn’t care about the turkey at all, it was only the trimmings I really liked.  The stuffing, the chipolatas, the bread sauce, these were the things I wanted to eat.  And the roast potatoes, of course.
Surprisingly little has changed.  I like smoked salmon for the lemon juice and black pepper.  I like snails for the garlic butter.  And when it comes to Christmas pudding, what I really enjoy is pouring brandy over it and setting it on fire. 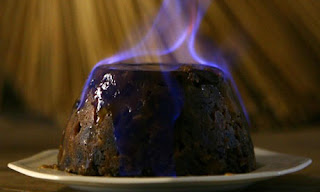 Christmas mince pies, however, seem to fall into a different category.  They really do fill me with a deep and intense nostalgia.  I always say I love them and that they’re part of what I miss most about not being in England for Christmas. My mother made a pretty good mince pie, but more than that, in England, several varieties of mince pie can be found in every corner shop, whereas in LA the mince pie seems to be a rare gourmet treat. Or, of course, people just find 'em disgusting. 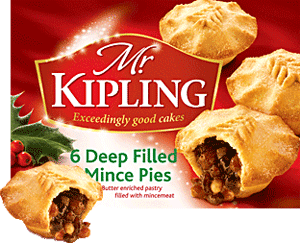 And you know, sometimes I’m not sure if I actually like the taste of mince pies, or whether I like them because I’m just associating them with a search for lost time.  So, since, this has been a jelly-positive year, I decided to make a dessert of mincemeat jelly. 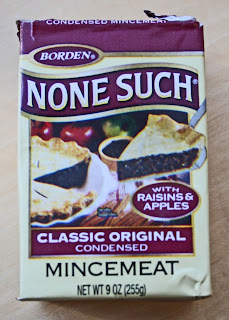 We didn't do anything very clever, just crumbled a pack of None Such “condensed” mincemeat into a pan, and rehydrated it with hot water in which a pack of orange flavor Jell-O had been dissolved.  Bompas and Parr, I know, would be horrified, and subtler versions are obviously doable. 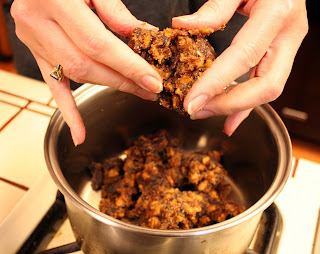 I still haven’t committed to acquiring some really good jelly moulds so I used some martini glasses and plastic cups.  You don’t have to turn them out, but it’s more fun if you do, even if they look like this.  Do click on it to get a close up. 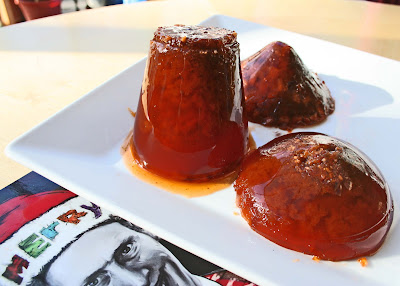 I’m sure I can't be the first person to have tried this, but it’s a new one on me, and in the Nicholson household it amounts to a brand new nostalgia-free, Christmas food ritual.  Or it will if we do it again next year.  Hey, and believe it or not, they taste absolutely great.  It seems I actually do like mincemeat a very great deal.   Happy Christmas.  May your eating may be merry and bright.
Posted by GeoffNIcholson at 4:12 PM