I DON’T SEE ANY CONNECTION TO VIETNAM, WALTER. 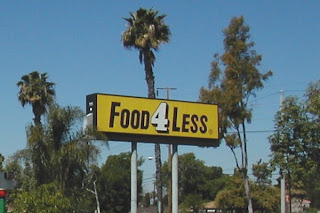 What kind of psycho gourmet would I be if I went into the Food 4 Less supermarket in Yucca Valley and passed up the chance to buy some exotic booze I’d never tasted, or even seen or heard of, before?  The booze in question was ChocoVine, “the taste of Dutch chocolate and fine red wine,” and 14 per cent proof by volume, according to the label, which also promised “grape wine with artificial flavor, cream and artificial colors.” 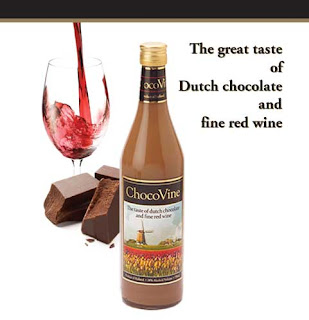 I take that to mean the wine is real and the chocolate is fake.  And since it claims to have a shelf life of six months after it’s been opened, I’m guessing the cream may have some artificial enhancements too.
The woman at the Food 4 Less checkout asked me rather sternly, “Have you had that before?”
“No,” I said. “Have you?”
“No,” she said, with finality and that was the end of the conversation, but  I think she was expressing disapproval rather than curiosity.
It was a brutal night in Yucca Valley as the fog settled, the wind howled and the sky dumped a winter’s worth of rain.  There were worse places to be, than in a motel room with the Loved One and a bottle of ChocoVine.  Here's a motel room still life. 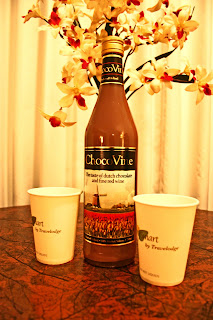 ChocoVine, I can report, tastes like a very slightly grown up relative of Bailey’s Irish Cream.  Sweet, of course, and essentially bland, but the fact is wine and chocolate (even artificial chocolate flavors) go pretty well together, which is not to say you mightn’t be better off with a glass of cabernet a bar of Toblerone, but it was definitely the right thing at the right time.
Now that I’m home the ChocoVine seems considerably less fun.  It actually looks as though I’m keeping half a bottle of cold coffee in the fridge.  Naturally I started to think of ways of livening it up, using it in a cocktail for instance, adding something sour: tequila or bitters or even lime juice, but then I noticed something else on the label, “Do not mix with acidic drinks.”
So then I headed to the Chocovine website which, as well as the usual flannel about awards and what a quality product it is, has some cocktail recipes.  These include Pure Bliss - ChocoVine plus hazelnut liqueur, the Treasure Island - ChocoVine with banana liqueur and coconut rum, and Lady’s Night - ChocoVine plus raspberry liqueur.
It dawned on me that I’d been knocking back (omigod) a GIRLY DRINK.  Whew.  What next?  Before you know it I’ll be drinking Cosmopolitans and Appletinis. It’s just as well I’m very, very secure in my manhood.  Even so I felt I had to manly up my ChocoVine with a good healthy slug of vodka. It looked like this, though to be honest it looked much the same before I put in the vodka. 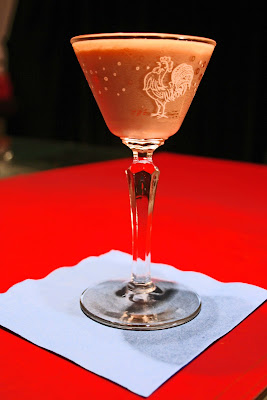 It’s not quite a White Russian, as drunk by the Dude in the Big Lebowski, but as he might well say, “Hey, careful, man, there's a beverage here!” 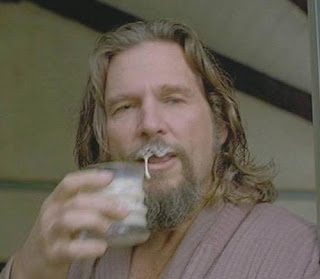 Posted by GeoffNIcholson at 6:49 PM