DINING WITH DE SADE, MUNCHING WITH THE MARQUIS, SCOFFING WITH A SADIST, ETC. ETC. 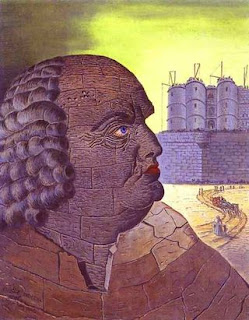 If you’re really in search of food, sex, obsession and the madness of the mouth, why look further than the Donatien Alphonse François, Marquis de Sade?  Of course, most people don’t read de Sade for the recipes, as it were, but the divine Marquis saw an absolute connection between food and sex.

He wrote, “Sex is as important as eating or drinking and we ought to allow the one appetite to be satisfied with as little restraint or false modesty as the other.”  Sounds fair enough, although he also added that, “Sex without pain is like food without taste,” to which most of us might respond, “Well, yes and no.” 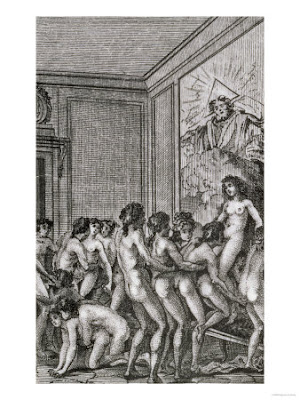 When de Sade writes about sex, he’s generally absurd: when he writes about god, nature, justice and all that, he becomes unreadable.  But just once in a while his writings turn into dark, fantastical, absurdist fables, like the section in Juliette when the heroine encounters the giant Minski, a Muscovite, also known as the Hermit of the Apennines. 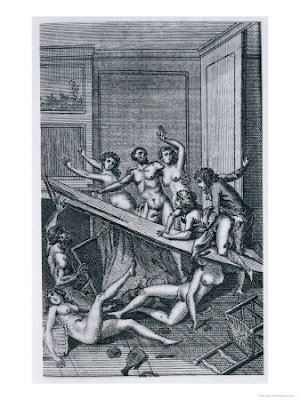 Juliette and her traveling companions go along to Minski’s castle where he shows them his idea of fun.  Some of this is certainly food-related.  He tells the guests about his taste for human flesh. “Whoever tries this diet is certain to triple his libidinous capacities,” he reckons.  In the dining room the tables and chairs are made of contorted, live naked women, a la Allen Jones or rather vice versa.  Dinner is served by twelve naked girls, and as it arrives Minski obviously feels some need for self-justification and tells his fellow diners, “it is no more extraordinary, after all, to eat a human than to eat a chicken.” 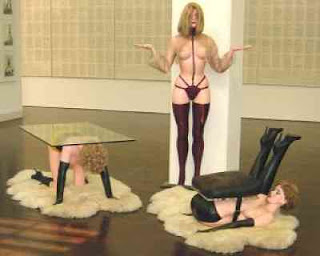 They tuck into a “joint of boy” and Minski downs 12 platters of the stuff; which presumably means many joints and many boys.  He drinks thirty bottles of wine with the first course, another thirty by the time the meal’s finished.  Then there’s a break for sex and murder, Sadism you might say, and then he decides to round off the evening with “mards, exquisite in form and exceedingly fresh.” “From the best asses in my harem,” he explains.  Juliette, who until then has been pretty much game for anything, excuses herself by saying, “an appreciation for these dainties is slow to come by,” and Minski takes it surprisingly well.  There’s lots more murderous libertinage, before Minski starts waffling on about the hypocrisy of hospitality, a discourse that goes on through the night until it’s time for breakfast, and Minski has “8 or 10 virgins-blood sausages” and eighteen magnums of Greek wine.  Neither Minski, nor de Sade, ever contemplated the notion that less is sometimes more.
Juliette was published anonymously in separate volumes between 1797 and 1801.  Napoleon ordered that the author of this outrageous text be imprisoned, and de Sade’s anonymity was insufficient to protect him.  He spent the last thirteen years of his life incarcerated, first in prison, then in the insane asylum at Cherenton
Incarceration was not an entirely new experience for him.  He’d already spent fourteen years in prison, first in Vincennes, then in the Bastille, before the Revolution freed him.  He’d found the regime in Vincennes more or less tolerable, but in the Bastille he found much to complain about, not least the food.  And you can’t help thinking he complained a little too much. 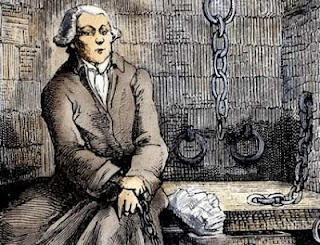 According to Neil Schaeffer’s The Marquis de Sade: a life, meals were served in the Bastille at seven and eleven in the morning and then at six in the evening.  “The midday meal,” Schaeffer writes “might consist of a soup, an entrée and a meat dish of mutton, salt pork, sausage, or veal, plus one pound of bread, and a bottle of wine.  Supper consisted of two dishes, including a meat dish, perhaps of roast chicken or calf’s liver. “Clearly they are starving me to death here,” de Sade wrote to his wife.
Vincennes was different from the Bastille in that the former allowed prisoners to receive parcels from home, the Bastille did not, but after much protesting De Sade got his way, and before long his wife was sending him pates. terrines, chocolate, special jams, marrons glace, and what not.  He doesn’t seem to have been quite as grateful as he might have been.  Schaeffer tells us that prison records from June 1784 show he was provided, at least for a time, with cut flowers once a week, and fresh strawberries every day.
There were a couple of occasions in the late 1990s when I went to a place in New York, named La Maison de Sade; it closed in 2001.  It was, I think you’d have to say, a theme restaurant, that billed itself as an “S&M supper club.” 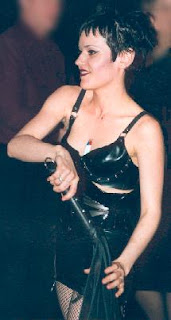 One surprising thing about the place was that it was right there on 23rd Street in Manhattan, close to the Chelsea Hotel, and anybody with enough nerve could walk right in off the street.  Even more surprising was that although there was a stage show that involved some willing slave being stripped and paddled, and various people wandering around in leather corsets, jock straps and dog collars, there were also a surprising number of what appeared to be just plain folk sitting at tables (that weren’t made of human bodies) eating perfectly ordinary three course meals.  In fact some of the people in corsets, jock straps and dog collars would turn out to be waiters and waitresses.
I seem to remember I just had a couple of drinks and some bar snacks, although unless I’m completely imagining it, there was a guy there celebrating his birthday and he got a birthday cake rubbed into his naked torso.  The marquis, I’m sure, would have found it all a bit vanilla. 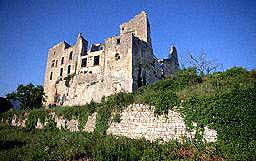 One of the de Sade ancestral homes was at Lacoste in Provence, a grim edifice in all the extant images, and poverty forced him to sell the place in 1796.  Since then, after much plundering, looting and neglect it’s been sliding steadily into ruin, with only occasional, not quite convincing, attempts at restoration.   But now I discover, a little belatedly, that the old de Sade pad has been bought and partly restored by Pierre Cardin, a man whose name appears inside my own overcoat. 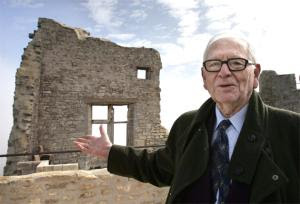 Cardin owns the Maxim’s restaurant chain, along with their range of food products, and in 2009 he was nominated as Goodwill Ambassador of the Food and Agriculture Organization of the United Nations, so clearly he has some interest in food. How much of a connection he makes between food and sex, I can’t say, but I do know what he’s done with the dining room in Lacoste, see below.  It really doesn’t look like a place where you could comfortably eat virgins-blood sausages. 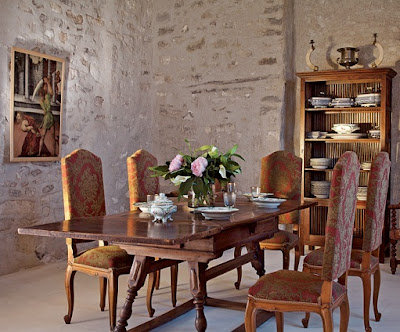