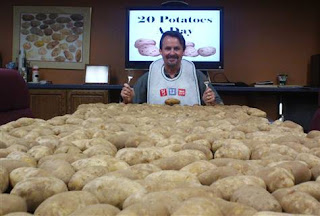 A man by the name of Chris Voigt (above) has spent two months eating nothing but potatoes.  This was, frankly, a rather cheap publicity stunt.  Voigt is head of the Washington State Potato Commission and he was protesting about the US Department of Agriculture rules that don’t allow recipients of food vouchers under the Women, Infants and Children (WIC) program to use those vouchers to buy “white potatoes.”  Sweet potatoes and yams they CAN buy.

As protests go it was pretty self-serving.  He just wants people to be able to use the vouchers to buy his spuds.  The WIC voucher program is intended to encourage recipients to eat a more varied set of healthy vegetables.  By and large they don’t seem to need any federal encouragement to eat a lot of potatoes.
Still, Voigt proved, what many of us have never doubted, that it’s possible to live on an all-potato diet.  Potatoes contain proteins as well as starch, and with their skins on they’re a source of vitamins, minerals and fiber.  The problem is that these things are only present in small quantities and therefore you need to eat a heck of a lot of potatoes to get your daily doses.  Of course, not everybody would regard this as a problem.  Voigt ate 400 pounds of potatoes in two months, call it six and a half pounds a day, and if the reports are to be believed, he lost weight and reduced his blood sugar and cholesterol. 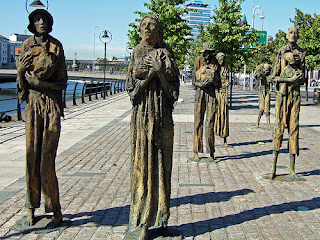 By some accounts that level of potato consumption is pretty much what the peasants were eating in pre-famine Ireland.  The historian Austin Bourke says that in farming communities each person ate a ton of potatoes a year (2240 pounds), which is a little more than six pounds a day; though in fact I’ve seen estimates of double that.  Bourke also reckoned that 40 per cent of the Irish population weren’t eating anything other than potatoes.
My own Irish ancestry ensured that as I was growing up, potatoes were eaten at every main meal, and my dad would go to a local farm and buy potatoes in hundredweight bags.  Old habits and cultural associations die hard.  Yes, I eat rice and pasta, but they don’t seem like real food in the way that potatoes do.  A part of me still thinks a “proper” meal has to involve potatoes.
I’ve found it very hard to find rock solid data on contemporary potato consumption in Ireland, but I’ve found one source that gives a figure or 300 pounds per person per year.  That’s considerably higher than the US or Britain (120 and 225 pounds respectively), but it’s a good way behind the worlds’ number one potato-consuming country, which is – wait for it – Belarus: 399 pounds.  Here are some Belarus potatoes being harvested. 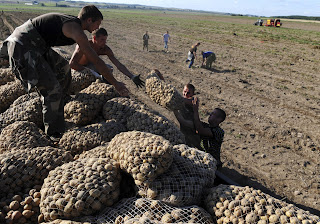 Most of what I know about Belarus comes from my friends Steve who’s involved with a charity that takes children from Belarus over to England for a few weeks at a time, to show them (I guess) the advantages of late period capitalism.  Steve tells me that one of the girls started every meal (regardless of its size and content) with two slices of bread covered in tomato ketchup.  Her motto was, "If you eat bread, you are never hungry."  Although surely the same would apply to potatoes.
I don’t know if you’re familiar with the American Potato Journal.  I can’t say that I am especially, but I did track down a copy from 1928 containing an article by John Harvey Kellogg, the Medical Director of the Battle Creek Sanitarium (yep, that's how he spelled it), the begetter of the cornflake, and subject of the novel and movie, The Road to Wellville.  That's him below talking to George Bernard Shaw. 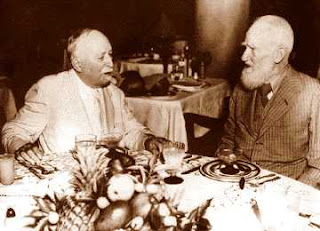 You might assume that Kellogg would champion cereals above all else, and yet here he is in the journal, author of an article titled "Why We Should Eat More Potatoes."  “In this country we have not yet begun to appreciate the value of the potato as an article of food,” he writes. Apparently what’s so great about the potato is that it’s acidic and this counteracts the body’s alkalinity, making life easier for the kidneys; and this is a a very good thing.
His evidence, he says, is right there for all to see.  In 1928 America centenarians were rapidly disappearing, whereas “Potato-eating Ireland furnishes more examples of great longevity than any other European country except Hungary.”  QED.
Posted by GeoffNIcholson at 10:48 AM