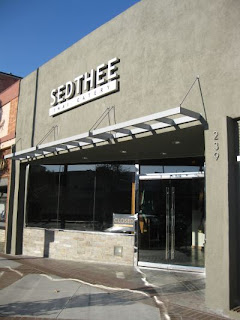 And speaking of the madness of the mouth, I went to a Thai restaurant in Glendale, name of Sedthee, which in fact calls itself an “eatery.”  I was there for lunch.  They claim to do a six dollar lunch, but the menu is so hard to understand that I think very few people know exactly what they’re ordering and it’s absolutely guaranteed to be more than six dollars.  Then again, who really thinks they’re going to get a restaurant lunch for six dollars?
The place is very modern and airy and designed, and absolutely cavernous, though you don’t realize that at first.  And on the menu was something called “fried nut case.” Who could resist? 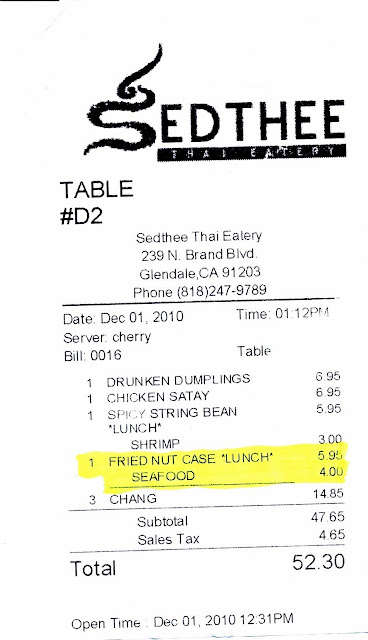 I did worry I might end up with a plate of fried peanut shells, but when the mystery ingredient turned up it looked like, and I think actually was, cashew nuts, and they weren’t in their shells.  It also turned out that, more or less unknowingly, I’d ordered them mixed in with seafood.  They looked like this: 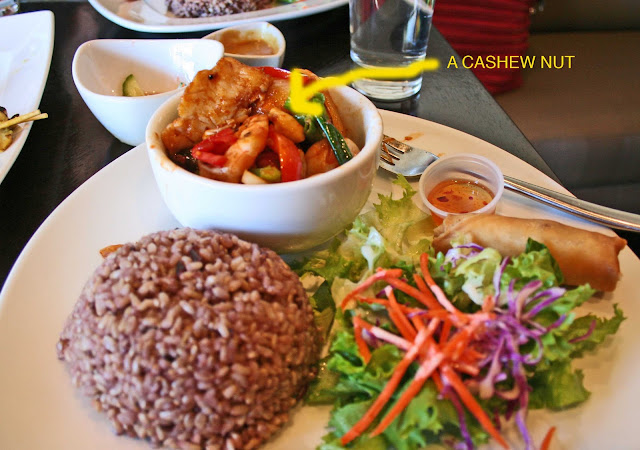 They were perfectly good, in a Thai lunch kind of way, but the best part was they allowed me to say afterwards that I’d had a nut case lunch: a small but real pleasure.
Oh, and another curiosity of the Sadthee, after we’d ordered, without actually specifying what kind of rice we wanted, the waitress came back to say they’d run out of white rice, and would brown rice be OK?  Of course, it was fine, but a Thai restaurant that runs out of white rice, seems a very odd one indeed.
Posted by GeoffNIcholson at 4:18 PM