THE COOL AND THE COOKED 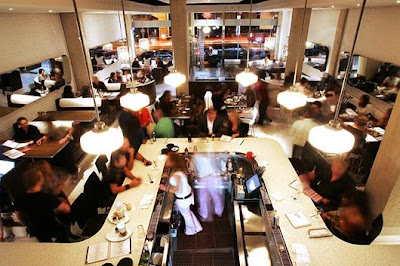 Isn’t it weird when you go to some restaurant, knowing nothing about it, and you have a perfectly pleasant but quite ordinary time, and then later you discover it’s one the hippest and hottest places in town?

This happened to me a couple of nights ago at Kitchen 24, here in Los Angeles.

The Loved One and I were walking along (rare enough in LA) looking for somewhere to eat and we went into this somewhat cool-looking diner-ish place on Cahuenga Boulevard.

I had meat loaf wrapped in pastry with mashed potatoes – comfort food I guess and it doesn’t get much more comforting than that, but then again if food doesn’t comfort you, why eat it? The Loved One had a steak salad. The steak was way overdone, but then she didn’t specify (and the waitress didn’t ask) how she wanted the steak cooked, so what could you expect?

But overall it was just fine.

Then I got home, looked up Kitchen 24 online and I see, according to Instyle magazine that it’s a hangout for the likes of Lauren Conrad, Scott Speedman, Megan Fox, Gisele Bundchen, Danny Masterson, Lindsay Lohan, Samantha Ronson, Brody Jenner, Paula Abdul and Audrina Patridge.

Ok I admit I’ve never heard of some of these people, and certainly don’t know what they look like so it’s possible some of them were there that night, but somehow I doubt it.

I also hear we should have ordered the “Smac and cheese” and the vodka- infused milk shakes; but I had no idea I was in such a cool place, so we didn’t.

It’s also the only restaurant I’ve ever been that has two – count ‘em two - happy hours.

Below: Lindsay Lohan eating, though not at Kitchen 24 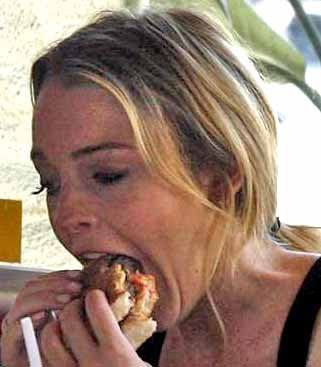 Posted by GeoffNIcholson at 12:26 PM