I guess my title Psycho-Gourmet also has something in common with psychogeography.

A psychogeographer according to Guy Debord is someone who studies "the precise laws and specific effects of the geographical environment, consciously organized or not, on the emotions and behavior of individuals."

So I suppose the psychogourmet would be someone who studies “the precise laws and specific effects of the eating environment, consciously organized or not, on the emotions and behavior of individuals.”

You may argue that these “laws” aren’t in fact very specific, and I would agree with you.

I think we’d also have to say that we’re nudging up against the notion of “terroir,” how the geography of a region (including its geology, climate, soil composition, cultural history and so on) creates specific qualities in the food produced there.

Psychogeographers are great lovers and manipulators of maps. And so am I. I especially love “food maps." There might be those who'd say that the Leafy Green Vegetable maze at the top of this post isn't an absolutely accurate depiction of food distribution networks, but what the hey.

I also like those maps that show an area and dot various foodstuffs around it, as if they were geographical features.

Here are a couple I’ve found.

First a map of United States represented by its beer labels, nice in its way but unless you were in the know you'd have a tricky time identifying either the states or the beers. 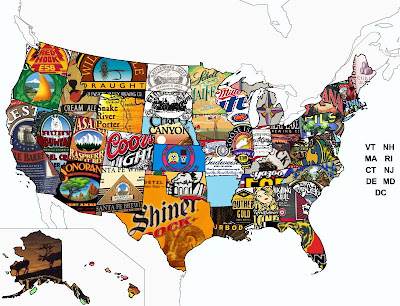 Naturally the Germans, are more orderly, and you could actually use this map to find your way around: turn left at the Bavarian pretzel and you’ll soon find yourself in Stuttgart. 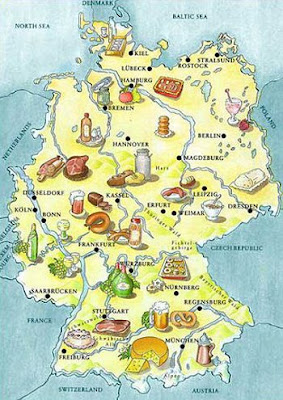 But if you’re looking for true orderliness, here’s a food map of my native city of Sheffield. It sure manages to make finding a seem restaurant a rigorous and foursquare business. Who knew there so many Italian-sounding restaurants in Sheffield? And who’d have guessed there was one called Yankees?

Posted by GeoffNIcholson at 4:39 PM