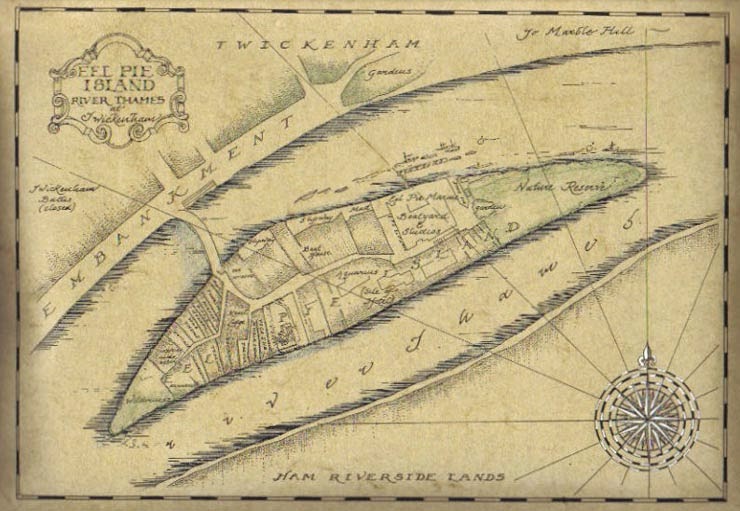 When I first moved to London I was aware there were establishments called “eel and pie shops,” though I didn’t really know what they were.  I liked pies and I thought I probably liked eels, though I’d never had any (my childhood was both sheltered and deprived). 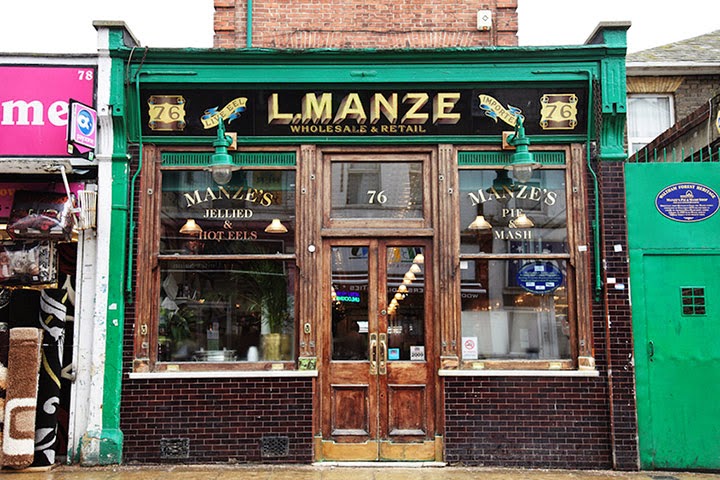 So I went along to an eel and pie shop: I think it was Manze’s in Islington, but I could be wrong about that; it was a long time ago.  And I imagined that I’d be ordering a pie filled with eel.  This wasn’t the case.  You could buy jellied eels, but I didn’t, and instead I ordered what turned out to be a fairly standard meat pie with mashed potatoes on the side.

The unique selling point however was the intense green parsley sauce that accompanied the pie and mash, the liquor as the man behind the counter called it, and in fact, traditionally the name is eel liquor, because it's made from the liquid the eels have been cooked in, though I had no idea about that at the time.  The pie, mash and liquor was good, but not quite the brand new experience I’d been hoping for.  I had, after all, eaten plenty of meat pies in my life. 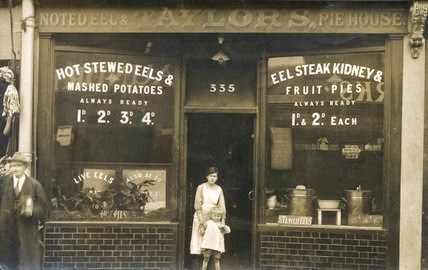 Now, reading a bit of history, I discover that in their Victorian beginnings eel and pie shops really did sell eel pies, but over the years eels have become ever more of a rare and expensive delicacy.  These days not all the surviving pie and mash shops even make authentic eel liquor, but one that does is Goddard’s of Greenwich and it so happens that I was recently at a launch/party/exhibition (for Bleeding London - go look it up) at the Cave in Greenwich, where Goddard’s pies were served. 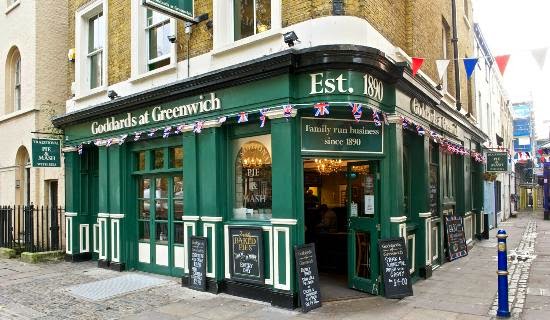 Now you and I might think that this (below) is the way to serve and eat a pie: 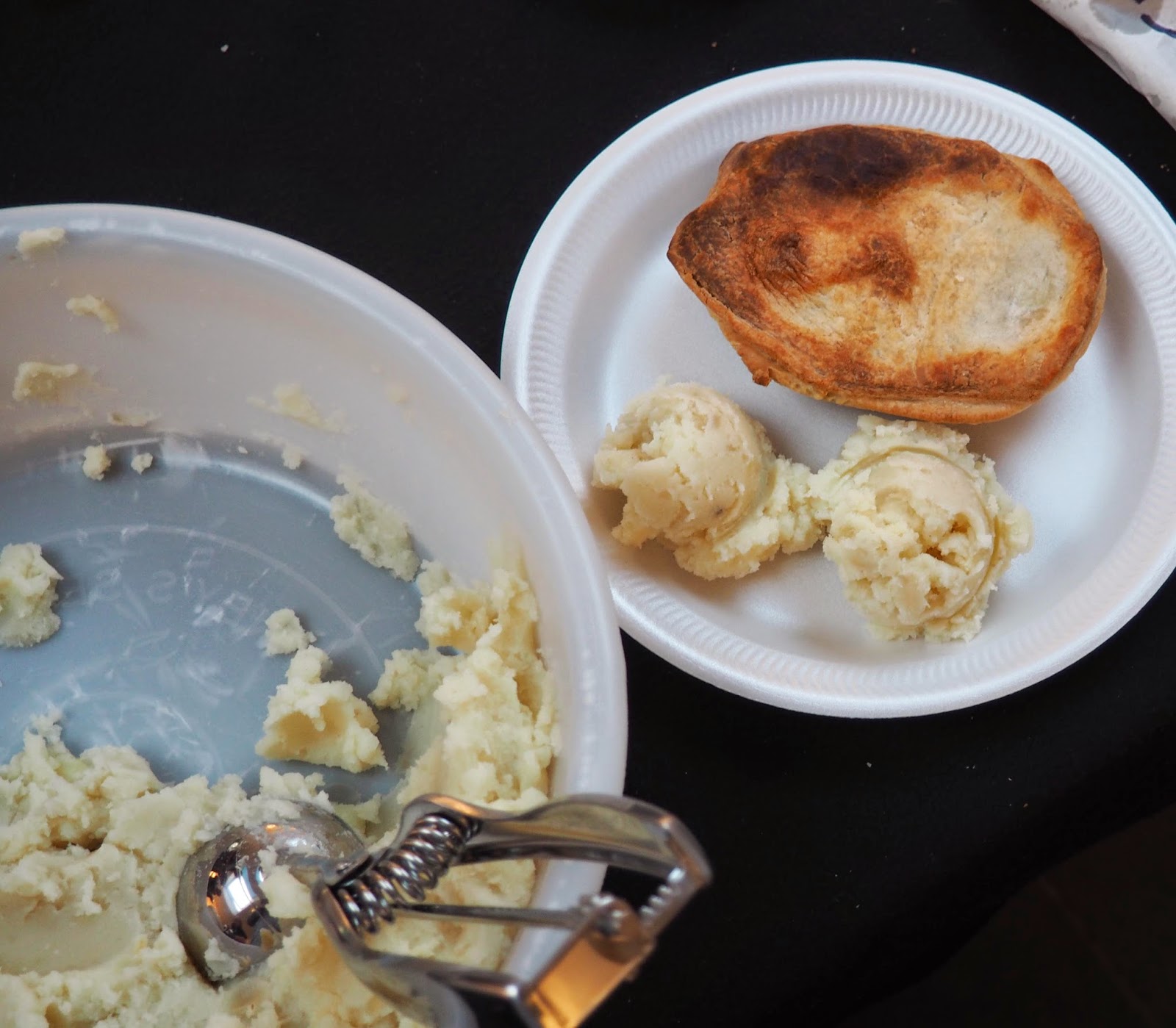 But in this case we’d be quite wrong, apparently.  According to tradition and custom, the pie has to be inverted, pierced with a fork to open up the insides, and then vinegar is shaken into the crevices along with the liquor. So that it looks like this: 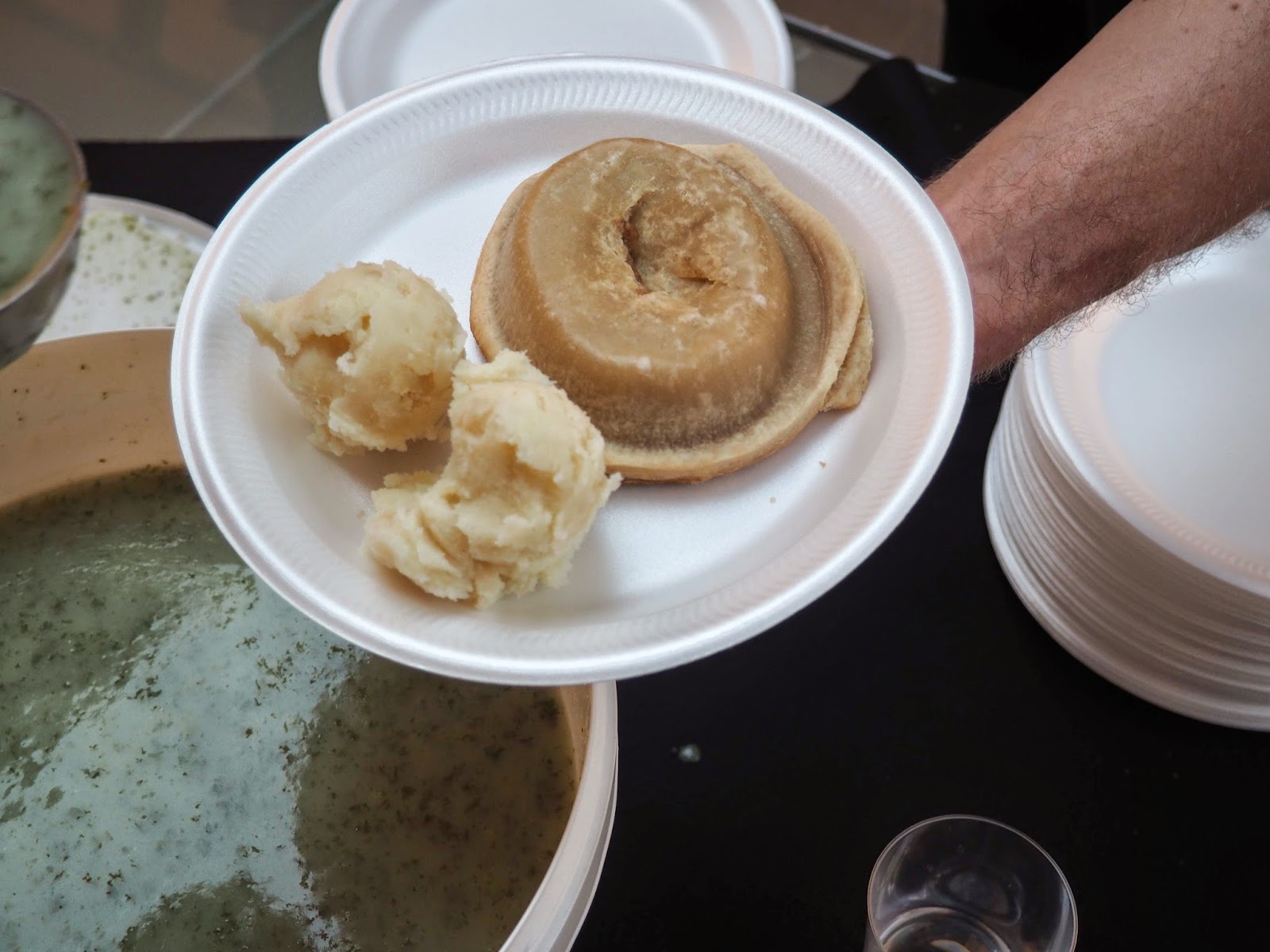 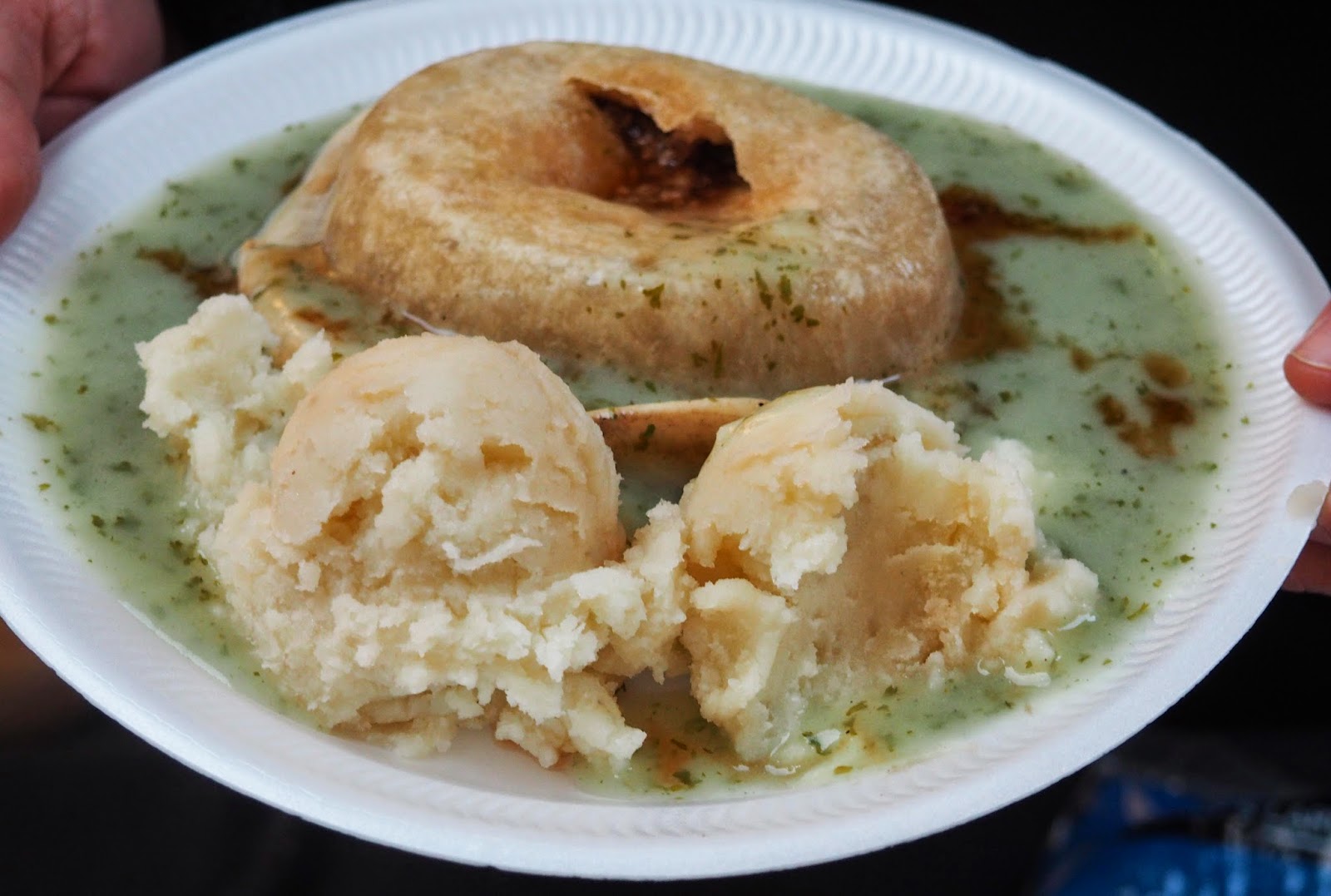 The shrewd observer may also note that two kinds of pastry are involved in the pie: the top is short crust, the bottom is made with suet.  Suet pastry – hallelujah!

I’m not sure this is a dish that would convert many Americans to the joys of British food, but I thought it was just tremendous.  There was liquor galore (which might almost be an Ealing comedy) both authentic eel, and vegetarian. 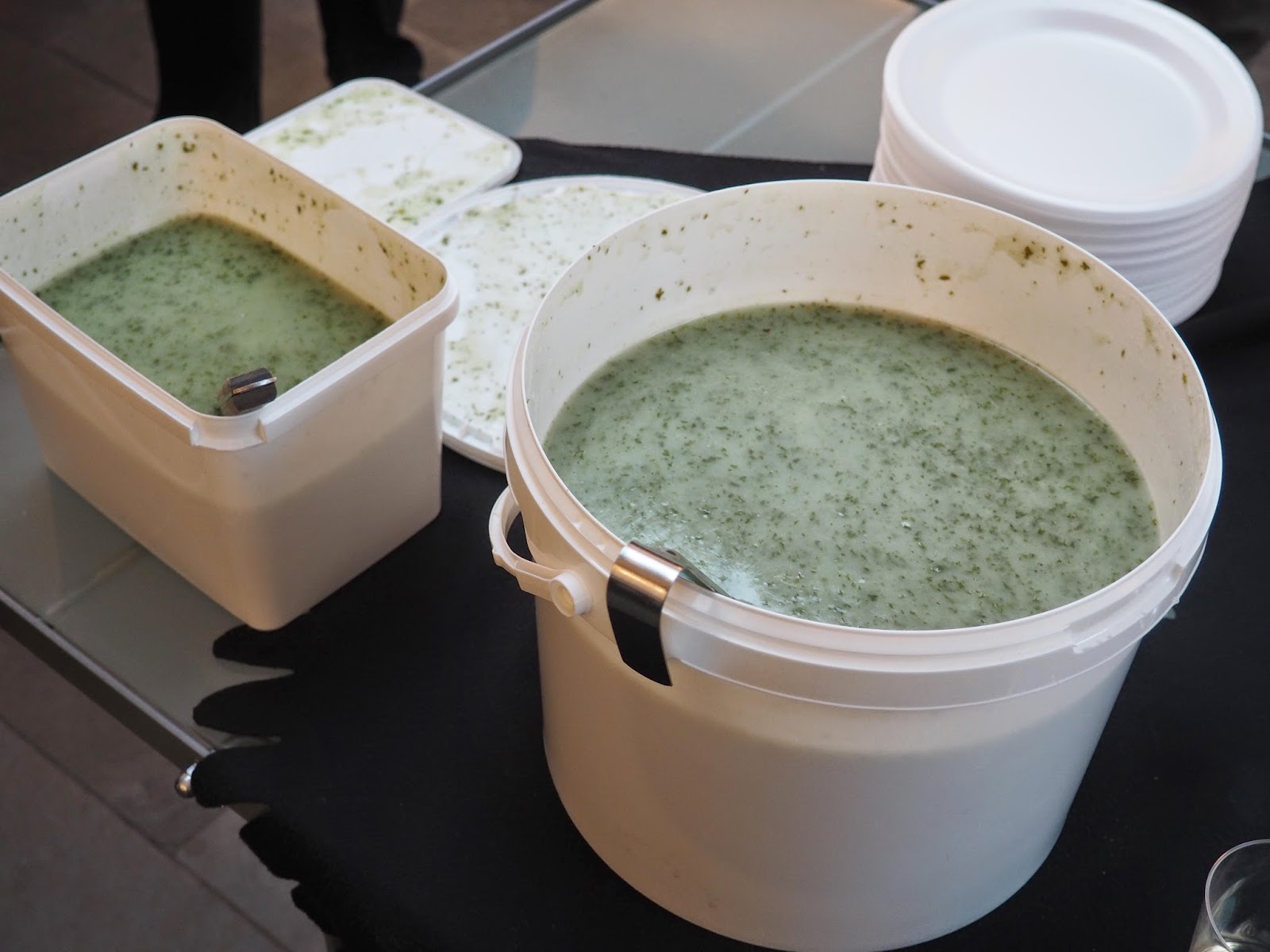 I suppose this was “low” food, though when you consider the Rex Whistler Restaurant is serving faggots, and Fergus Henderson is serving potted meat, who knows if that term means anything anymore?  The meal I had in London that best covered the high/low spectrum, was the Plateau de Fruits de Mer at the Bibendum Oyster Bar, though there was nothing low about the setting. 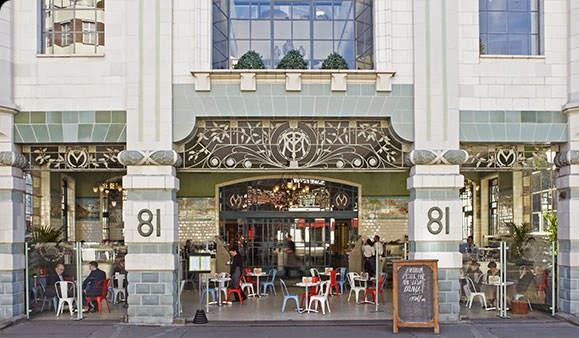 Up at the top end were langoustines and crab and oysters, in the middle were Atlantic prawns and brown shrimps, and at the “bottom” were winkles and whelks.  Photo by Del Barrett (who also, most generously, bought the meal): 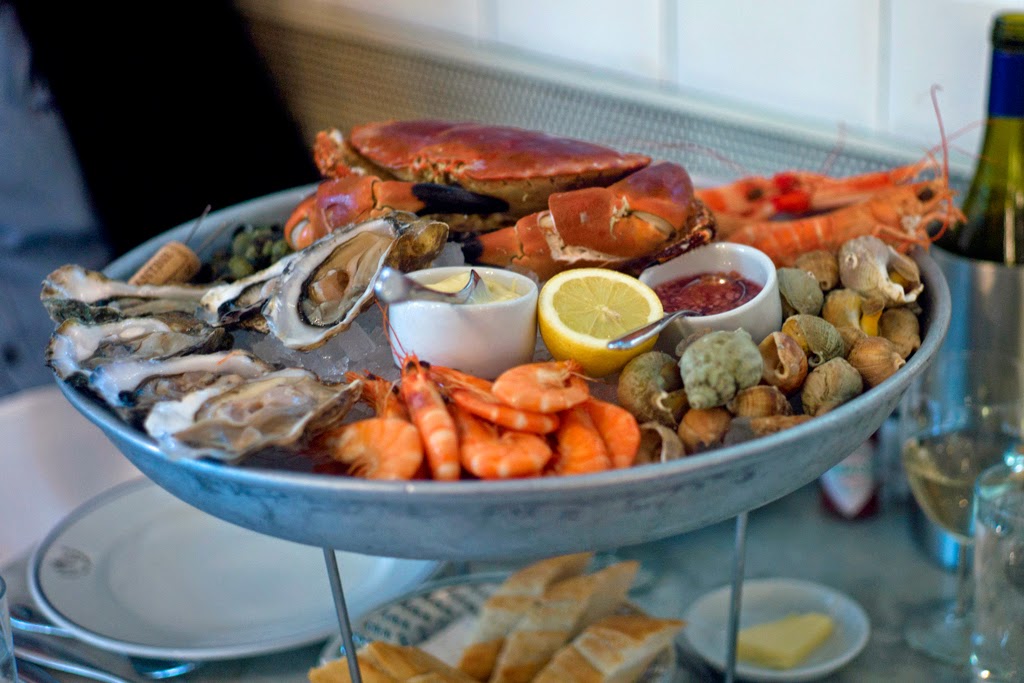 I’ve written elsewhere about the role of whelks as a signifier of masculinity in northern England in the late 20th century.  As I was growing up, my dad was the whelk-eater, and as the lad I only ate cockles.  I can’t say I was craving whelks all through my boyhood - they looked vaguely unpleasant and had the texture of rubber - but I could see that eating them was somehow synonymous with passing through the portal of manhood. 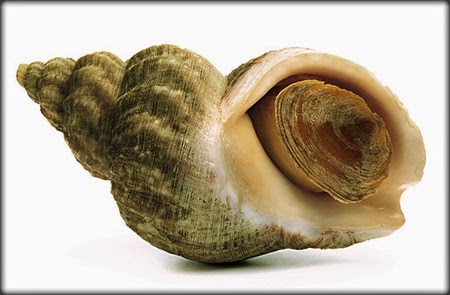 The Bibendum whelks came in their shells, unheard of in the Sheffield fish market where I used to see my dad eat them, and here they were accompanied by lemon wedges, again unheard of: in Sheffield it was vinegar or nowt.  There at Bibendum, squeezing my lemon wedge, I felt secure in my manhood, while still aware that there might be certain old school northerners who’d think I’d turned into an effete southern softy.  They don’t eat many jellied eels up north either.
Posted by GeoffNIcholson at 6:55 PM