And of course while in England I ate what the English would call potato crisps, and what my American neighbors would call potato chips.  I selected these two as a couple of interestingly similar examples - both sausage and mustard flavour. 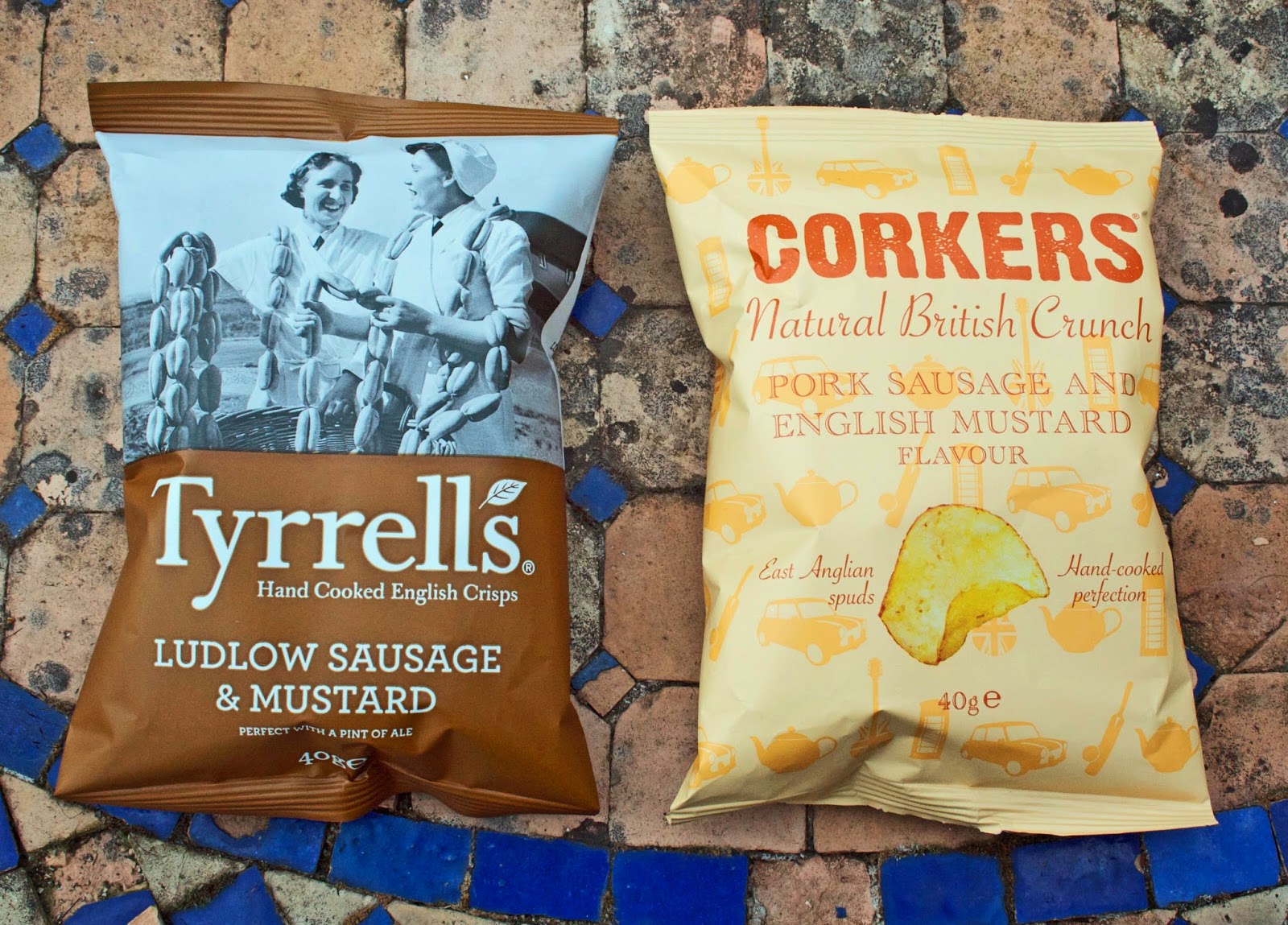 You’ll notice that Corkers don’t immediately declare themselves to be either crisps OR chips, but rather “Natural British Crunch” which sounded to me like a euphemism for some sort of chemical construct, although the promise of East Anglian spuds on the packet was vaguely reassuring, and indeed potato crisps is what they are.

Both varieties definitely seem to be peddling some dubious version of British nostalgia.  Corkers have silhouettes of phone boxes, Minis, cricket bats and whatnot.   Tyrell’s have happy girls, perhaps from the farm, perhaps from the factory, and they tell us, just in case we’ve been living in a bunker for the last 30 years, that crisps go well with a pint of ”ale.”

I can’t say I’d ever heard of Ludlow sausage – there’s no mention in Antony and Araminta Hippisley Coxe’s Book of Sausages  (which is my bible in these matters) but of course it’s declared online that they’re part of a long and noble tradition.  This may just possibly be true. 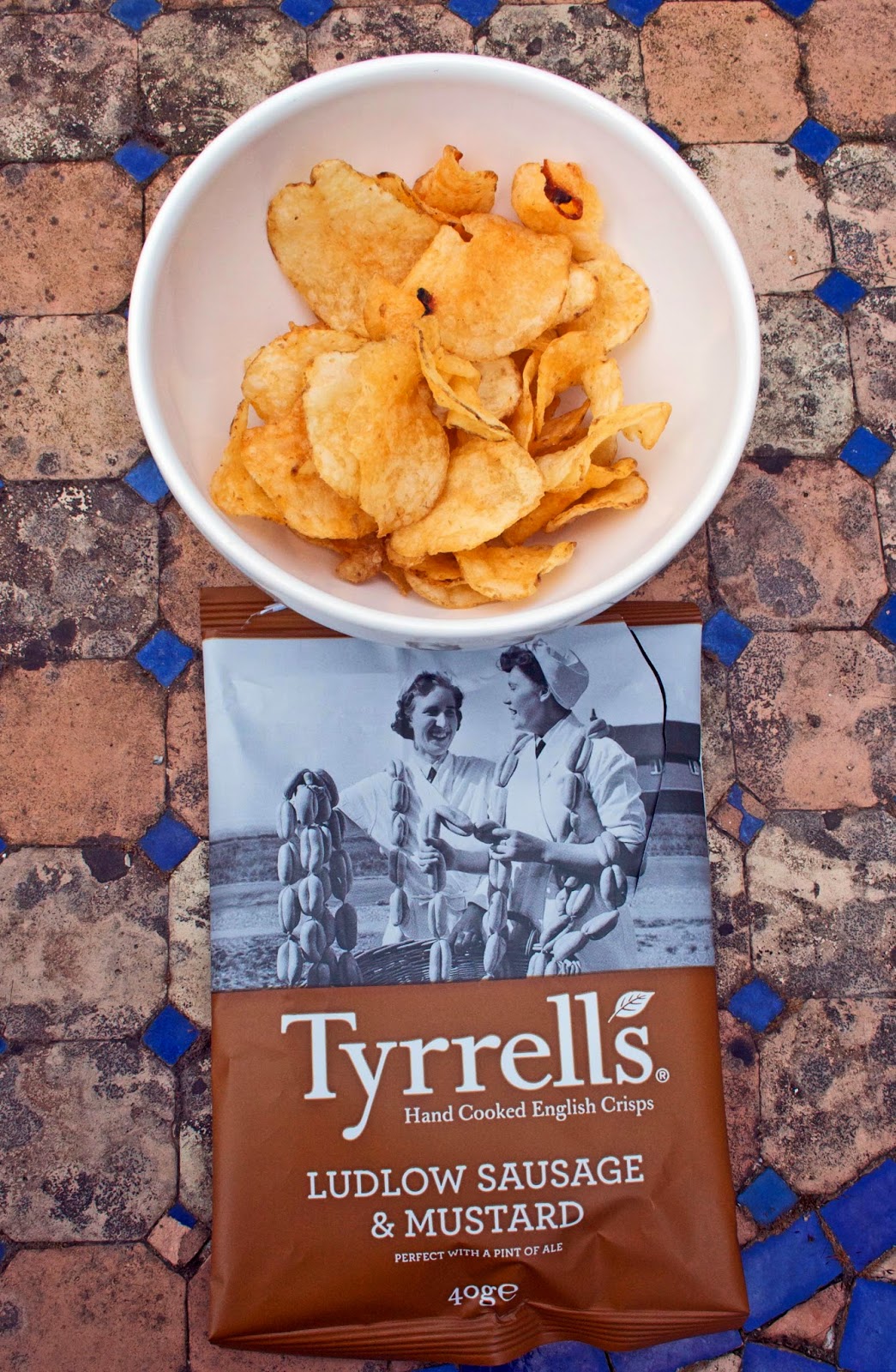 In any case I didn’t get a strong sausage taste from the Tyrell’s, more of an all-purpose savory flavor, and they were perfectly fine, and no doubt better still with ale (perhaps in a flagon for old time’s sake).  The list of ingredients runs as follows, “Potatoes, Sunflower Oil, Sausage and Wholegrain Mustard Flavour (Lactose, Sugar, Salt, Mustard Powder, Yeast Extract Powder, Onion Powder, Sage, Spice Extract, Pork Powder, Citric Acid, White Pepper, Garlic Powder, Flavouring, Colour: Paprika Extract)” which leaves me wondering whether there’s any actual meat or sausage in the mix.  Again, I had never heard of pork powder, but I now know it’s a pork-free seasoning, containing hickory smoke, dried jalapeno and a bunch of other things. 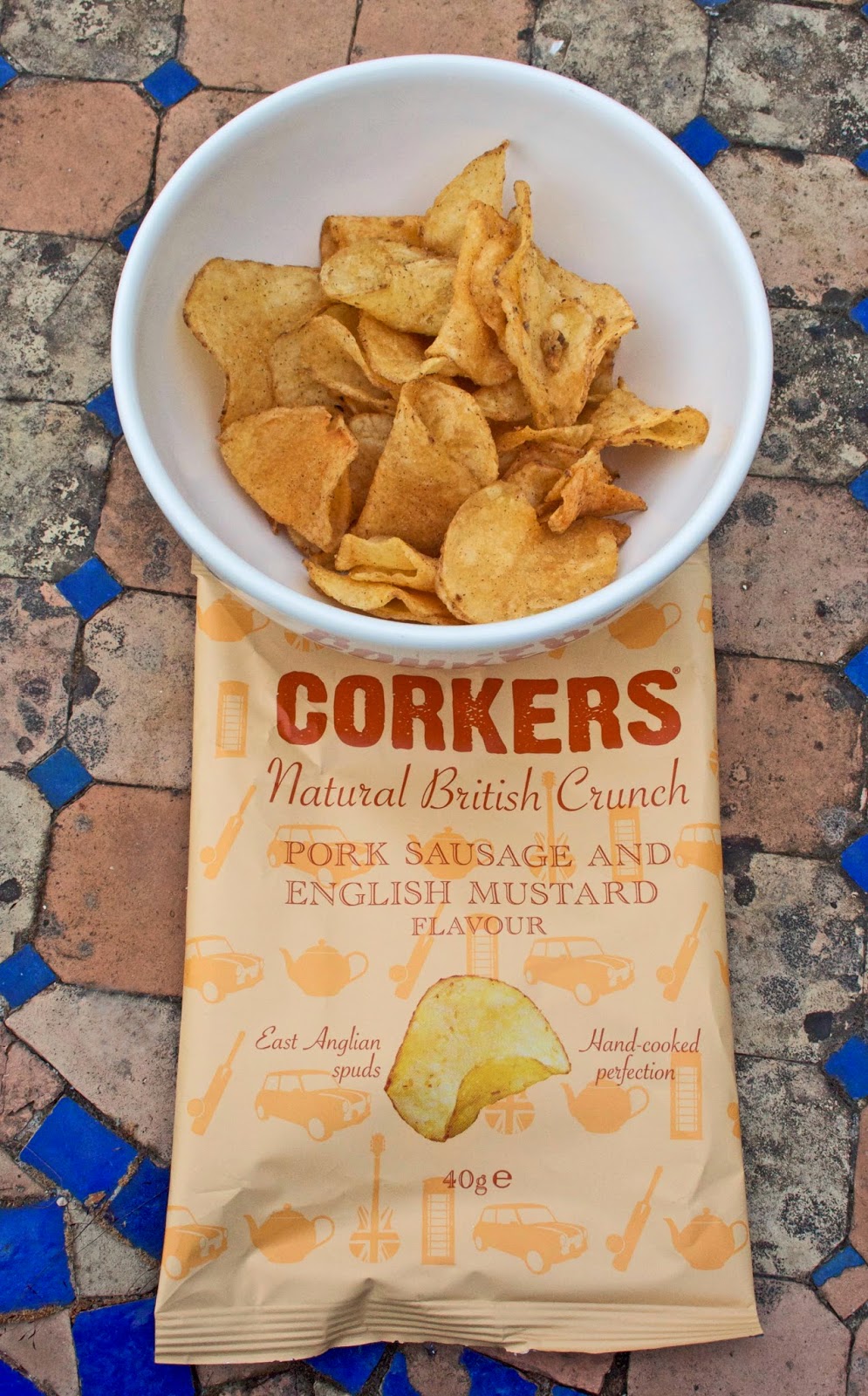 Corkers tasted far more like the real deal.  There was a big tangy burst up front, which I suppose was the mustard, though if I’d had to guess I might have said it was vinegar, and then at the end there really was a genuine, intense, lingering pork taste.  How they managed that, I’m still not sure.  The pack lists as the ingredients as “Potatoes, Sunflower Oil, Yeast Extract Powder, Potato Starch, Whey Powder (from Milk), Salt, Wheatflour, Sugar, Spices (including Mustard), Natural Flavourings, Herbs, Onion Powder, Natural Colour: Paprika.”  So again no obvious presence of meat or sausage, unless sausage can be construed as a “natural flavouring.”

And finally, for those who want to believe that British food is a series of unnatural shocks that flesh is heir to, may I present the Very Peculiar Marmite chocolate bar.

Now, I think anyone who goes out of their way to proclaim peculiarity is already trying too hard, and so it was here.  It really wasn’t very peculiar at all.  It tasted fine, rather like one of those bars of chocolate with sea salt.  I got the savoriness, and once you know it’s Marmite then you can taste it quite clearly, but really I’m not sure I’d have got it in a blind tasting. 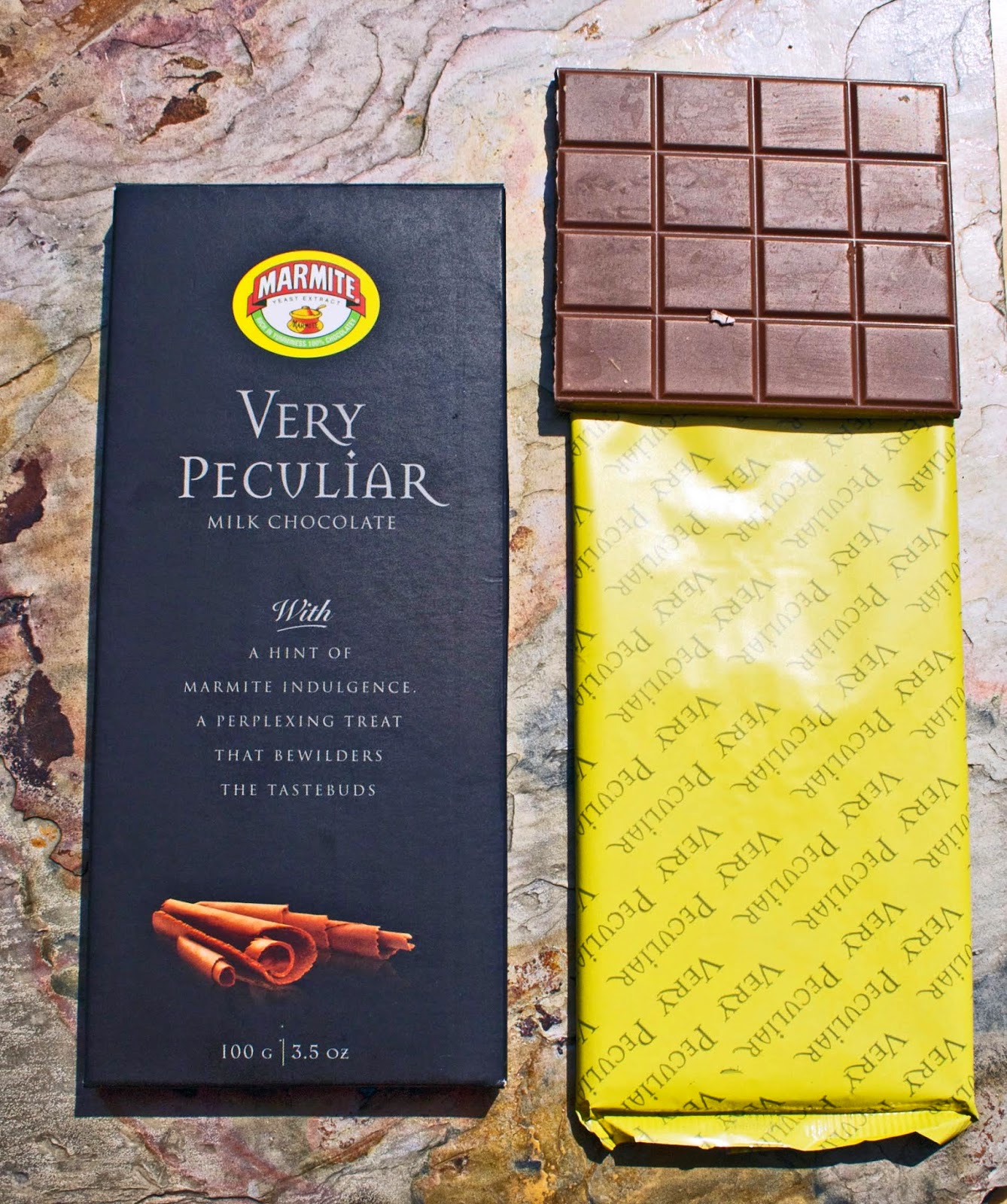 The problem I think is that it’s 98% chocolate and only 2% Marmite, and I reckon 2% is way too low.  As a man who tends to have both chocolate and Marmite in the house I shall be doing some experimenting – 3 per cent, 5 per cent, spreading Marmite thickly across a chocolate bar as though it were a slice of toast.  Hey – don’t judge me!

Posted by GeoffNIcholson at 5:07 PM