OUT VILE JELLY (I MEAN NOT VILE AT ALL REALLY, BUT WHO CAN RESIST A SHAKESPEAREAN PUN?) 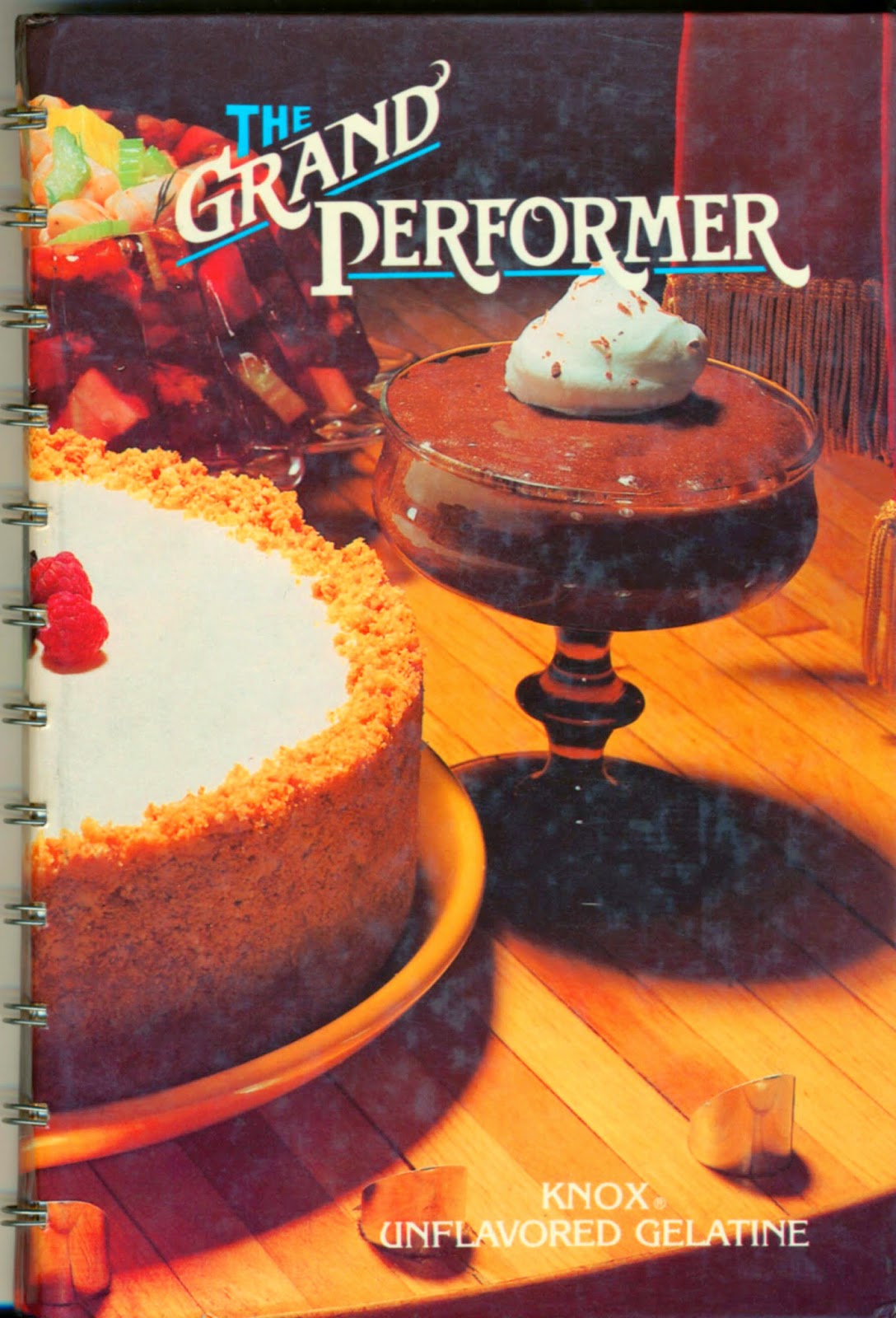 Here in the Psycho-gourmet test kitchen we’re not great rule-followers, which is to say we’re especially bad when it comes to following a recipe.  But having discovered a book titled The Grand Performer, by which they mean Knox Unflavored Gelatine, I decided I’d try to obey the instructions and make a New England Clam Chowder Pie – “slightly unconventional” indeed. 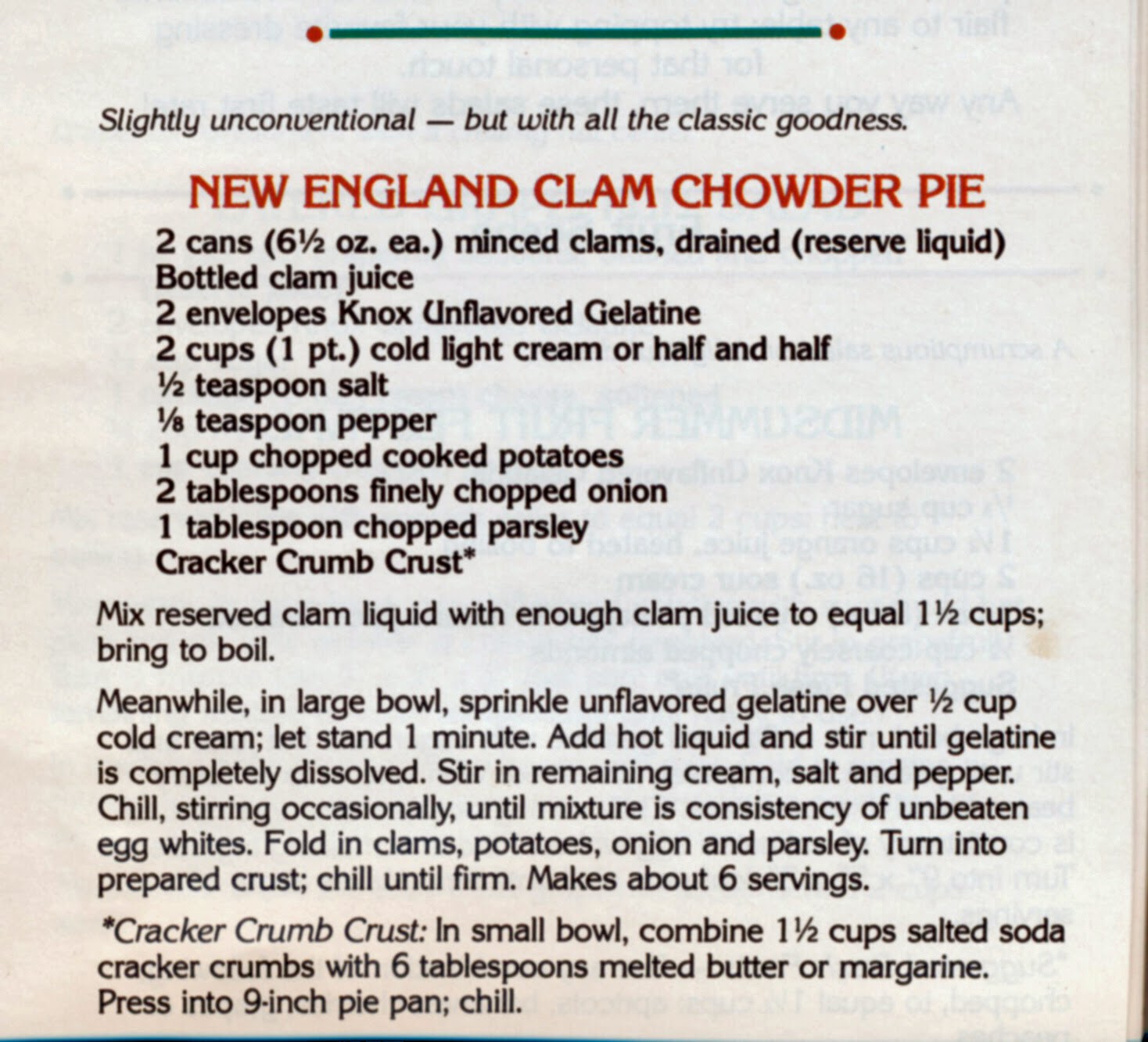 The book has no date on it, but it seems to be from the 1980s.  The Knox Gelatine Company was founded in 1889 and the introduction says, “For almost 100 years creative cooks have relied on Knox.” 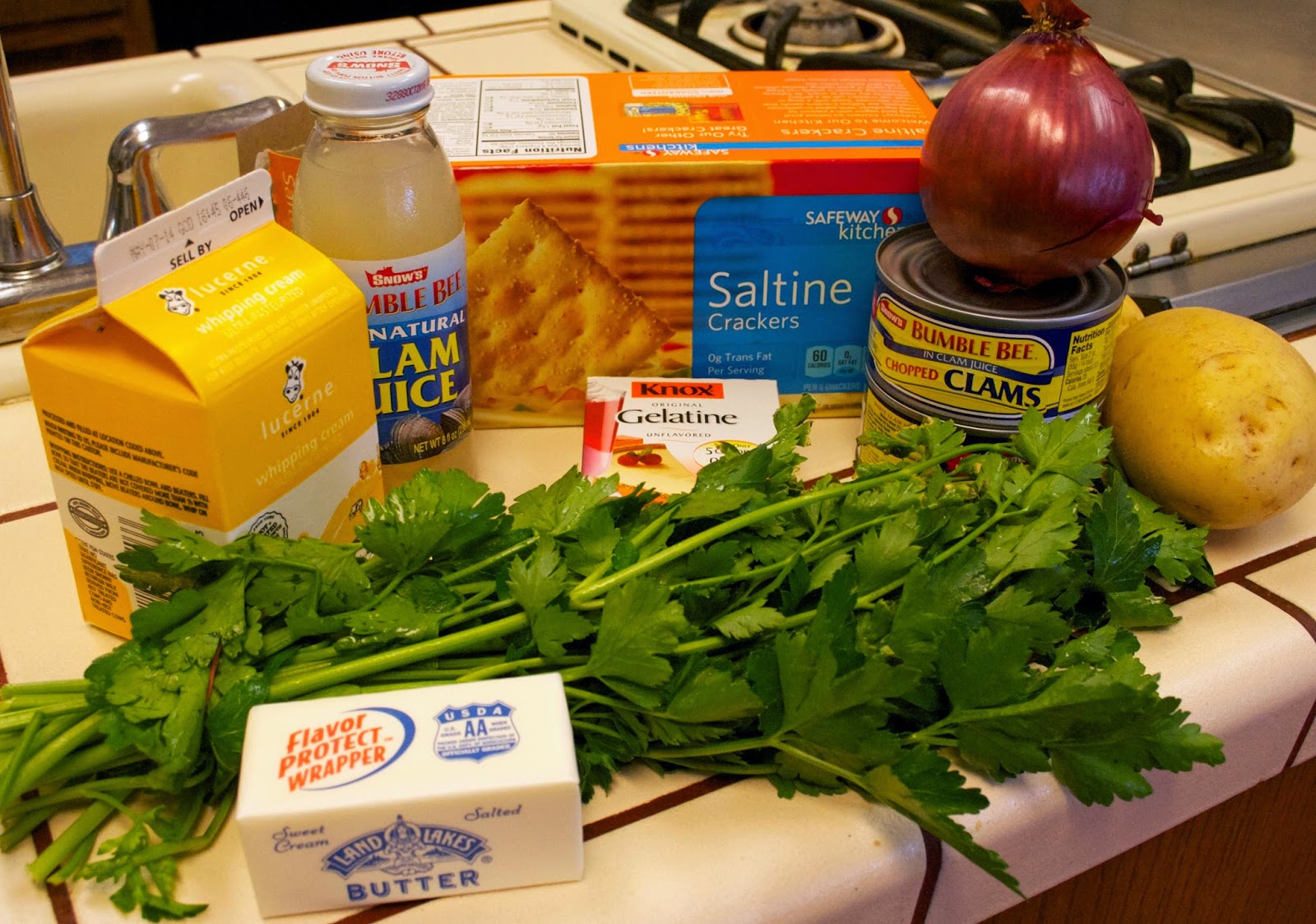 I gathered the ingredients (above) though in the end I didn’t use the bottled clam juice since there was plenty in the cans of clams, and I topped it up with a little sherry instead: otherwise I did what the recipe told me to do.  It also seemed to me, just from reading the quantities, that 6 tablespoons of melted butter wasn’t enough to combine with one and a half cups of soda crackers to create a crust, but again I followed orders.  And it looked like this when it was done: 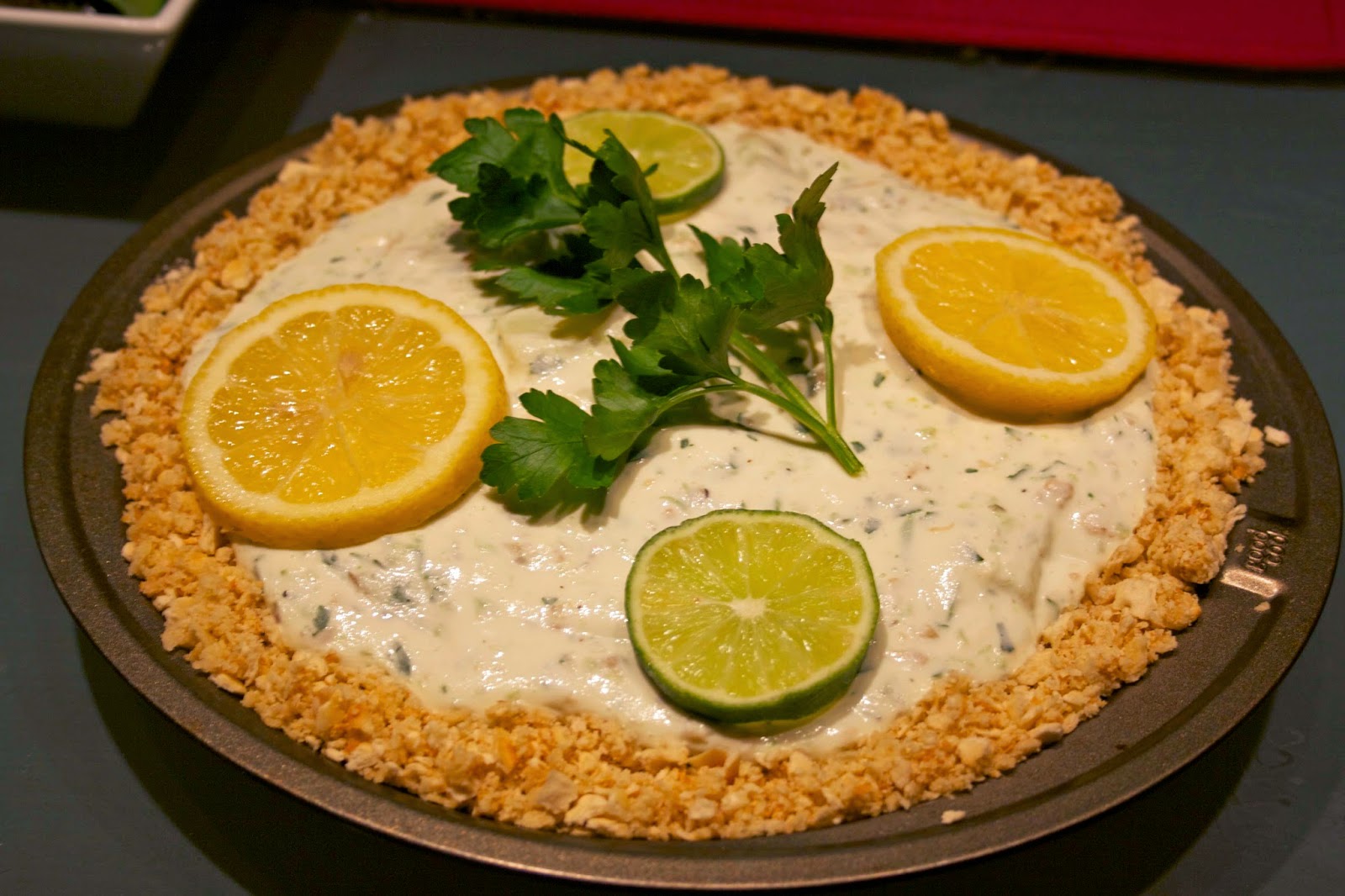 And it looked like this when it was sliced: 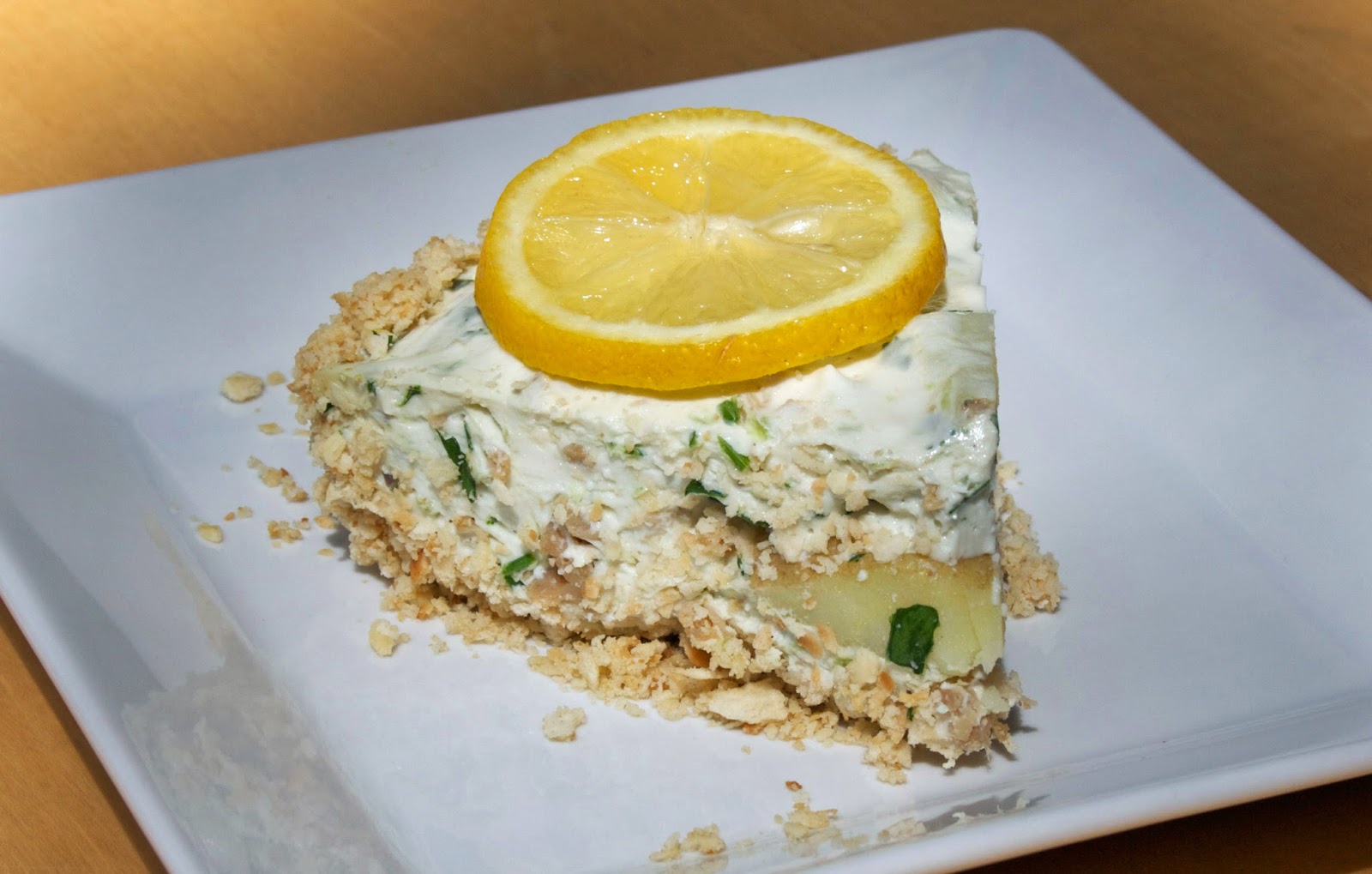 You see I was right about the crust.  And how did it taste?  Well, a bit bland, frankly.  Did it need some lemon juice? Yes it did: I thought it would.  It also needed some salt.  Both these things were easily added, but it still tasted a bit bland.  And it occurred to me that if you took a can of clam chowder soup and threw in some gelatine you’d get a very similar result, though I don’t think that would actually constitute a recipe.

The Grand Performer is reasonably well illustrated: by the 1980s the era of truly garish food photography was in decline.  It contains no picture of New England Clam Chowder Pie, but there is this bad boy: 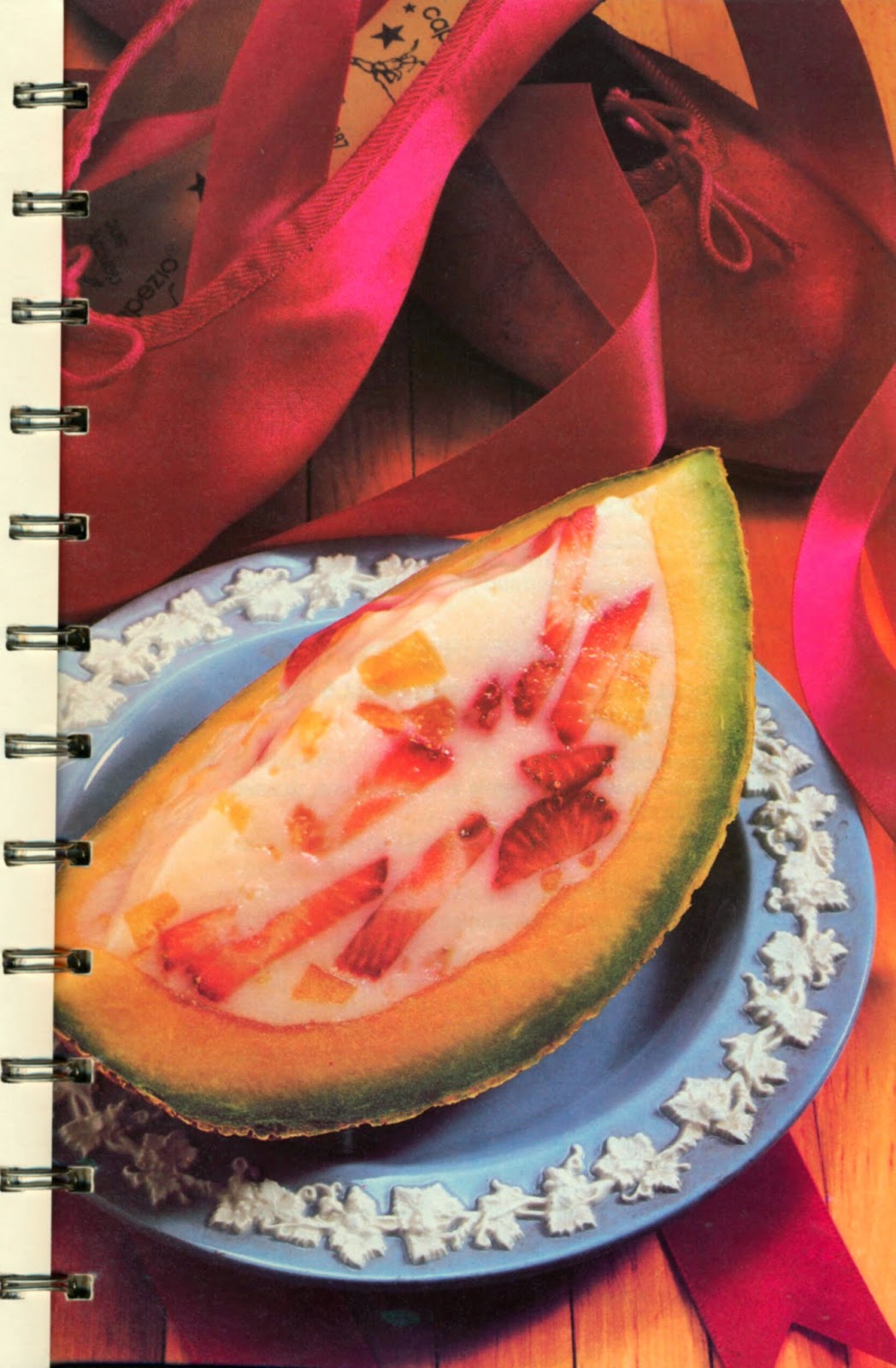 Melon Magnifique.  Honest, that’s what they call it.  It’s a scooped out cantaloupe filled with sliced grapes and strawberries set in jellied yoghurt.  Goes especially well with ballet shoes, evidently.
Posted by GeoffNIcholson at 6:22 PM