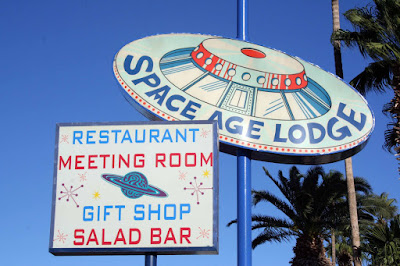 The Loved One and I have been on a road trip through Arizona and New Mexico, indulging our taste for (among other things) deserts, Americana and road food.

We did our best to avoid eating in chains, heading for the quirky, the eccentric, the soulful; but it was harder than it sounds. 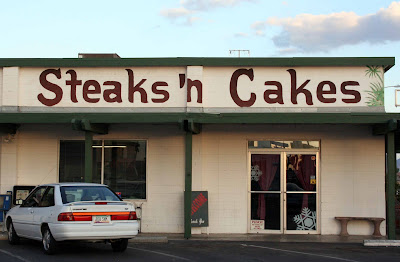 Of course if you’re a restaurant trying to draw the attention of people driving by in cars it pays to have a quirky sign, a quirky building, or maybe just a quirky name.

We were suitably drawn, but once you get inside these places, the food is often quiet ordinary: burgers, patty melts, all day breakfasts. And this being the desert southwest there’s also plenty of Mexican influence: carne asada, tacos, breakfast burritos. 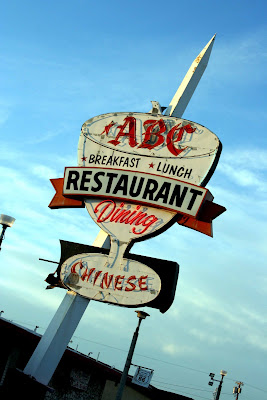 I can’t tell you exactly where these restaurants buy their ingredients, but there wasn’t much that suggested “local sourcing.”

My dream was that we’d be driving along the highway and turn off to discover a perfect
French-Mexican-American bistro/cantina tucked into a mini mall on the outskirts of Los Cruces. But it was not to be.

We did however find a couple of great places in Bisbee, Arizona. 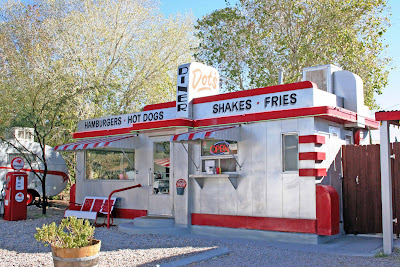 The first (above )was Dot’s Diner attached to the Shady Dell Trailer Park – where the food was as good as the architecture. I liked it so much I bought the mug.

And then there was Jimmy’s Hot Dog Company: 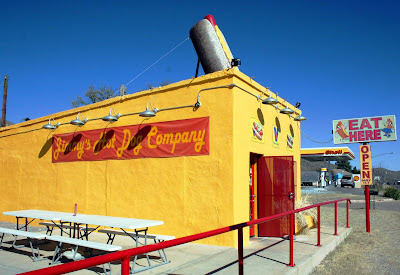 There’s nothing like a stucco hot dog on the roof to draw the eye. We saw it one evening as we drove past, then decided we had to make a detour the next day and go back.

The hot dogs looked very good, but since I have a rule of ordering things I’ve never seen on menus before, I went for something called the Sea Dog. This is a fishy version of a hot dog (so not really a hot dog at all), actually a long thin tube of cod in beer batter served in a bun. 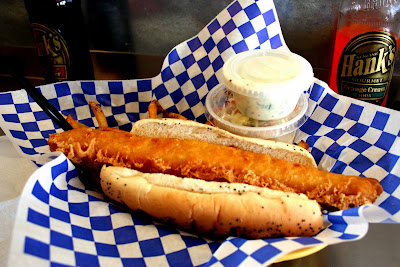 I admit I was a little disappointed later when I looked it up and found that the Sea Dog is a national product made by Icelandic USA Inc, but it was still new to me, and wildly inventive by the standards we’d encountered on the road.

Still, Jimmy’s Hot Dog Company was quirky, fun, different, very friendly, and what road food should be all about. Apparently the place even got a good review from Gourmet magazine.

We also stayed a couple of nights in Alamagardo, and went to the Museum of Space History where we saw some American space food that looked like this: 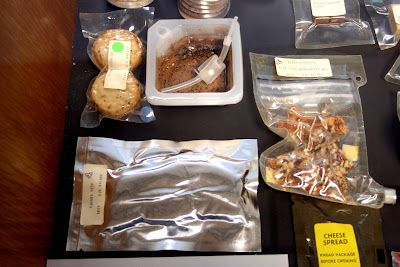 And then we saw some Russian space food that looked like this: 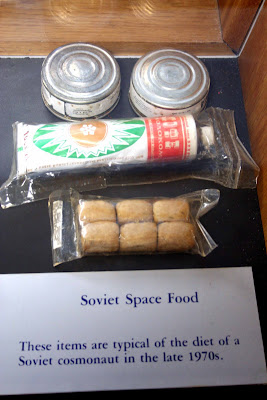 Is it just me or does the Russian version look far more quirky, eccentric and soulful?
Posted by GeoffNIcholson at 4:36 PM