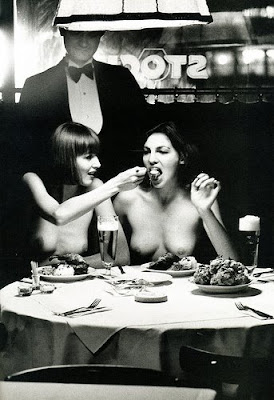 Of course we know that models are famous for having eating disorders, and of course that’s terribly sad, but it’s also why we’re so fond of them. Would we love a podgy Kate Moss quite as much as we love an elegantly wasted Kate Moss? Would we feel the same about Agyness Deyn if she had love handles and a taste for pork pies? Oh yes, yes, sure, of course, I’m sure we would. 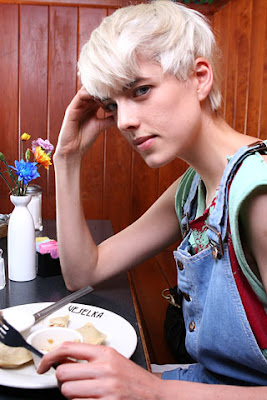 At least many of the models photographed by Helmut Newton had a certain amount of meat on their bones, they looked like they could devour a good piece of meat, which was Newton’s preference and apparently a cause of conflict between him and various magazine editors.

One of my very favorite Helmut Newton photographs features not a fashion model but his wife, June. Thus: 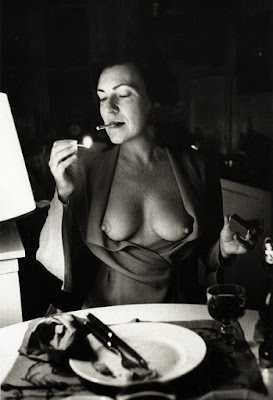 The photograph may well have been a big set up, or at least something that Newton had had in mind and visualized long before he took the picture, and yet it strikes me as wonderfully spontaneous: photographer and model sitting together after dinner, a little drunk, a little sexy, she lights a cigarette, he says get your tits out, he reaches for his camera; and thus great art is made.

My own wife was once photographed by Helmut Newton. To everyone’s amazement, not least mine, her tits stayed in, but she did have lunch with Newton before the shoot. He ate steak tartar, no bread, no fries, and two diet Cokes. No wonder he kept his figure.
Posted by GeoffNIcholson at 6:56 PM