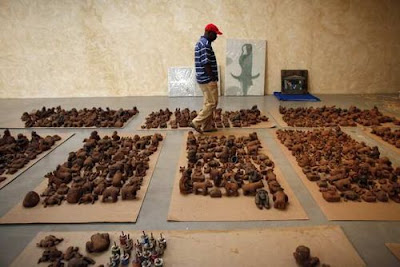 The other day, at the Santa Monica Museum of Art, I went to exhibition or work by Elia Simé. He’s regularly described as one of Ethiopia’s greatest contemporary artists, although I admit I’d be hard pressed to name another.

Simé did just fine under the old, repressive Stalinist-style Derg regime in Ethiopia, and he’s doing even better now. His art is craft based, uses found and recycled materials, and sewing is one of his important techniques. He makes thrones, sculptures made from mud and straw, decorated animal skins, as well as works on canvas.

He gets a lot of his raw materials from markets around Adidas Ababa, the Addis Merkato, one of the largest markets in Africa. The merchants there know Simé and the kind of thing he’s looking for, and they put items aside for him.

A few years back he worked in the market as a day laborer, lived on the street and ate in the market’s makeshift restaurants, eating something called boole; and that’s why he’s in this blog.

I’d never heard of boole, but according to the exhibition notes by co-curator Meskerem Assegued but it seems to be common in Addis Ababa. Homeless people go from door to door in the area, to actual restaurants and to private homes asking for leftovers, which they collect and take back to the market.

Anything that looks good enough is reheated and served on a plate. The rest becomes boole. The less appetizing leftovers are spread out on a plastic bag and left out in the sun until they’re dehydrated. The dry residue is then pounded in a mortar to make a powder, which is then boiled, or friend with onions and served.

This seems to be recycling taken to its logical conclusion. We know that half the world could live on what the other half throws away. But here in Addis Ababa absolutely nothing is allowed to go to waste. 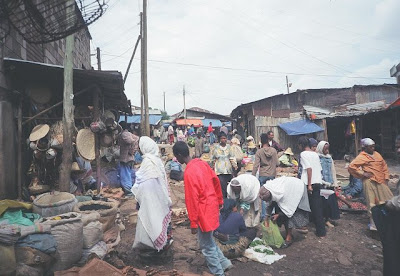 I’m not sure that the idea of eating dried reconstituted leftovers is in itself very appealing - this is surely as low on the human food chain as we can go - but all the same I can’t help admiring the people conceived of, who make and eat boole.
Posted by GeoffNIcholson at 5:32 PM