THE HAGGIS AND US

It being that time of year, more or less, four of us celebrated Burns Night at the Tam O’Shanter, Los Angeles’s best stab at a British (ish) restaurant.  Walt Disney was a big fan. 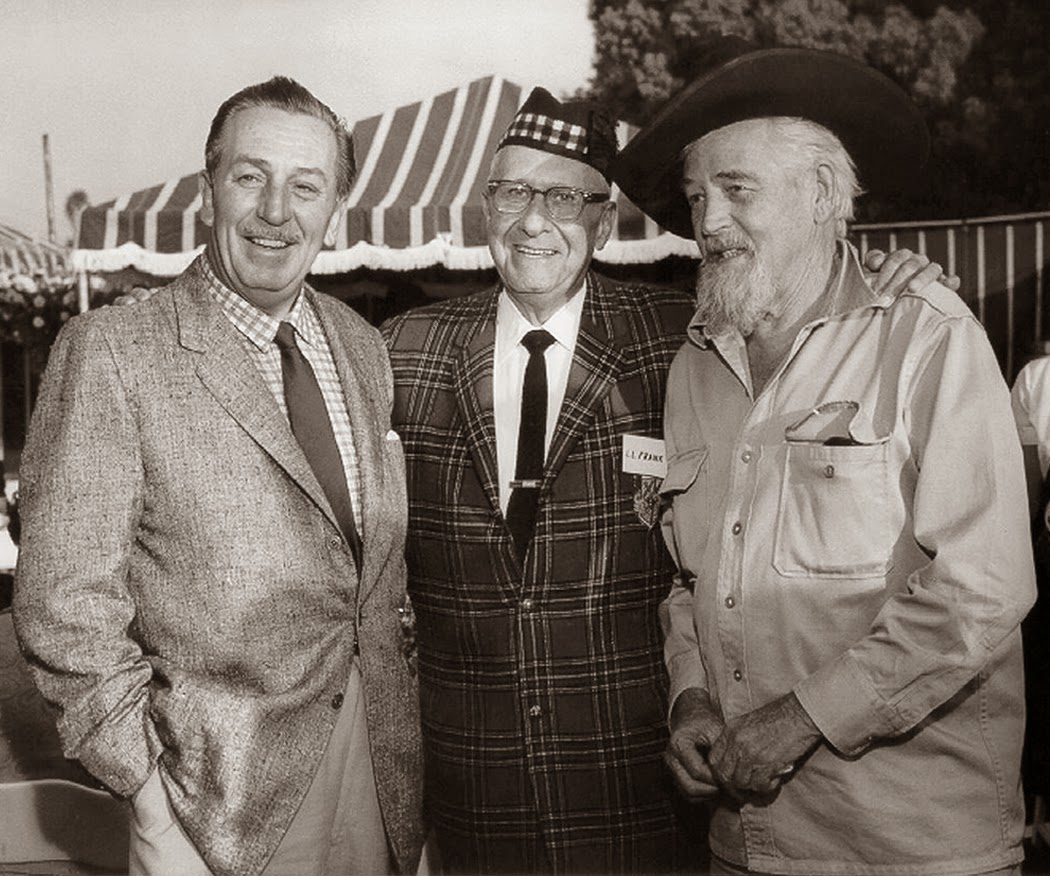 Although it was a Burns Night special, the menu was pretty much as usual, heavy on the prime rib, though with the seasonal (not Burns-related) addition of goose, which I ordered, and it was very good, actually even better than the goose cooked at Nicholson Acres at Christmas.  Everybody else had the prime rib. 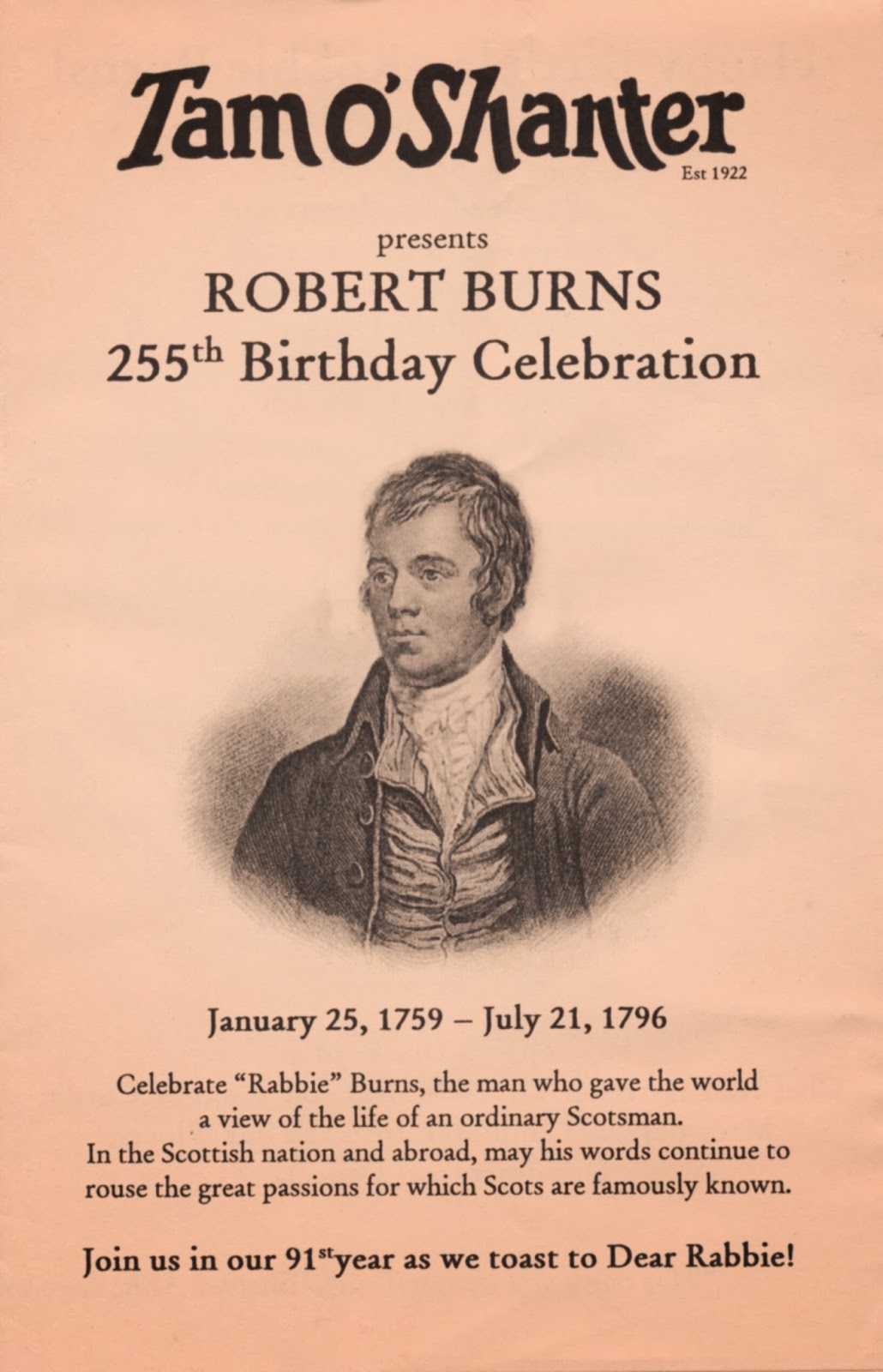 But of course we were really there for the haggis, and to a lesser extent the reading of the Burns poem, and to a greater extent the playing of the bagpipes.  I’ve always enjoyed the sound of bagpipes and I know a lot of people say they sound like a cat being strangled, but I always wonder how many of these people have ever actually heard a cat being strangled.   Up here in the hills I occasionally here a feral cat being torn apart by a coyote and it don’t sound much like bagpipes, believe me.

The only problem haggis-wise: the good folk at the Tam seemed to think haggis was an appetizer or even an amuse bouche, so it came in a small portion on a wee saucer to be shared among the four of us.  It was OK as far as it went but it didn’t go very far, and I’ve certainly had more intensely flavored haggis. 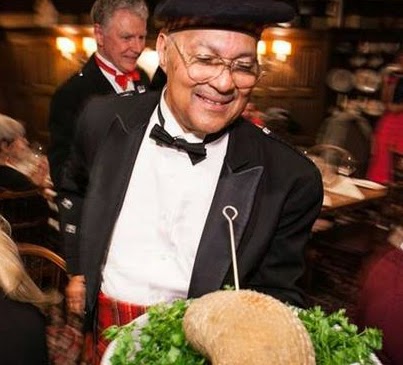 There was, of course, the “ceremonial slaying of the haggis” (above and below) and if you think that outer casing looks like tripe rather than a sheep’s stomach, I think you’re absolutely right.

So when the end of the meal came, after the sticky toffee pudding and so forth. we asked our bus boy, who was of course Mexican, if there was any haggis going begging, and he seemed to find this idea very entertaining, and indeed there was, and he delivered a box of it to go, actually about twice as much as we’d been given at the start the meal.

So what do you do with left over haggis?  Well I made a pie.  This second batch of haggis was significantly different from our starter portion – tastier and way more livery – and all the better for that.  I made my pie in a slapdash sort of way, and zested it up with a bit of balsamic vinegar, Worcestershire sauce, sherry and some gravy we had in the fridge.  And let me tell you – it was a taste sensation!  I wish you could have been there.  It looked like this: 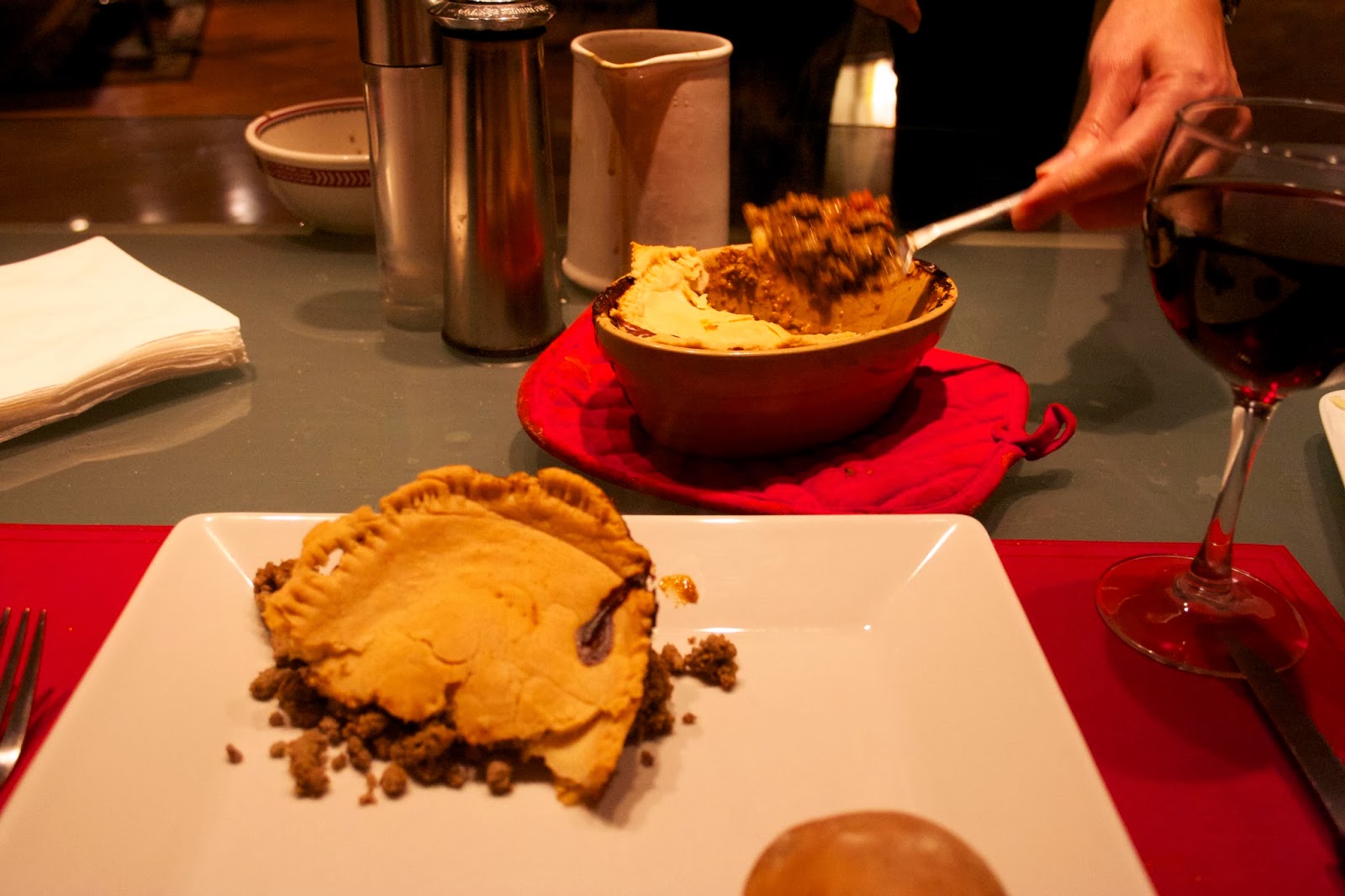 But now wait on, Watson.  If you zoom in on the picture – blow me down, isn’t there a cat’s face looming there in amid the haggis in the pie dish?  Personally I might have preferred the face of Robbie Burns or Elvis, but you have to take miracles as they come.  The fact is, no cats were strangled in the making of this haggis pie. 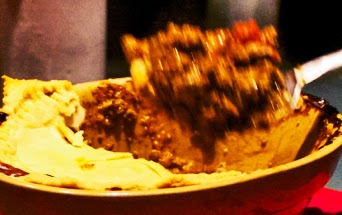 Posted by GeoffNIcholson at 10:26 AM