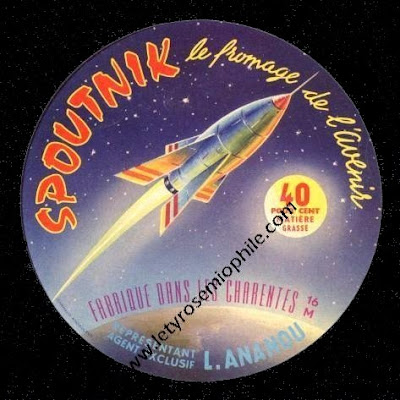 It seems that when I was a boy I was (very briefly) a tyrosemiophile, though at the time I would have said (in the unlikely event that anybody had asked) that I was a fromologist.  I mean that I collected cheese labels.  It was pretty half-hearted and short-lived, and clearly it lacked the intellectual rigor of stamp collecting, but it had the advantage that it was related to cheese.  Not that this helped me much. 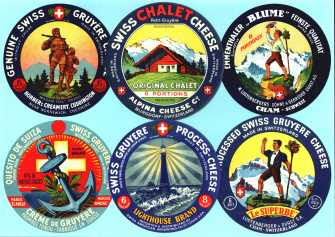 My parents, as I’ve said elsewhere, were plain eaters.  They knew what they liked and they liked what they knew, and they thought they knew what I’d like too.  So when we went to the Castle Market in Sheffield I’d gaze longingly at the cheese counter, admiring both the cheese and the labels, until my mother assured me she wasn’t buying any of that stuff because she knew I wouldn’t like it. 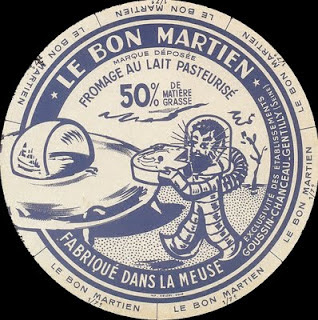 The most exotic cheese I ever got to eat was a multipack of Kraft cheese spreads.  I’d pretty much forgotten this – perhaps blotted it out – until I happened to see a collection of cheese labels online.  Dairylea was certainly our default cheese spread, so my mother didn’t find these too wild.  I can’t say I really remember the tastes, but I do recall liking the blue cheese a lot, the celery not so much.  And I remember there was one that contained tomato which was pretty awful. 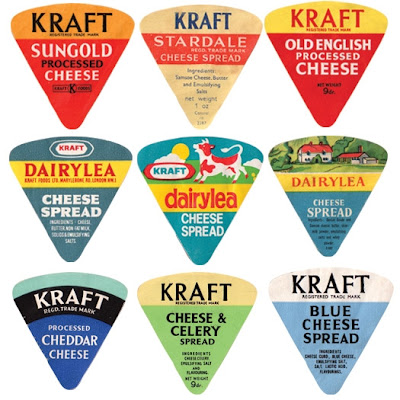 As you see, the labels weren’t really very exciting.  When I first went to France I did find some beautiful labels on camembert boxes, but by then I’d moved on from my tyrosemiophilia.  And now I find there is indeed a thriving cheese label collecting community, and why not, given some of these amazing labels?  They’d make a collector out of any of us.   Of course in some cases you know the cheese inside couldn’t possibly live up to the label, but I could accept that. 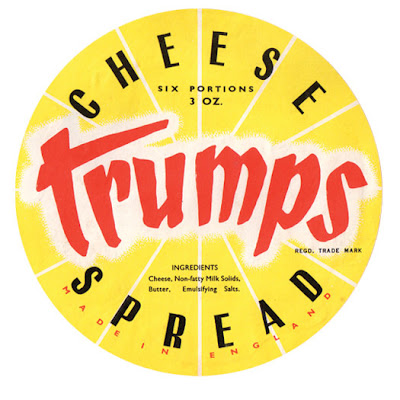 I’ve also found this label for Trumps cheese, made in England, but I’d never seen it before.  In my bit of Yorkshire “trump” was a widely used, slightly childish, euphemism for “fart,” so maybe the Trumps company thought they’d be wasting their time trying to sell us their cheese.
Cheese has been on my mind again, still, because I’ve been trying to imagine a Venn diagram of cheese lovers compared with fans of free jazz. Most cheese lovers hate free jazz I’m sure (as do most people, full stop), but I think most free jazzers aren’t averse to cheese, so I think it would look like this: 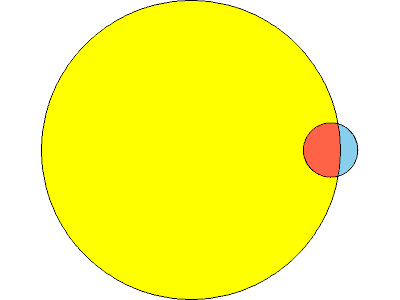 I’m right there in the overlap, but I mention free jazz in relation to cheese, only because of the blessed Dutch free jazz drummer Han Bennink who once, famously, played a set of drums made from cheese. In fact he was playing an art installation titled, Cheese Kit Diptych by Walter Willems, featuring two drum kits, one made of plastic display replicas, the other made of real cheese.  Willems said the piece was incomplete until Bennink had played both drum sets. 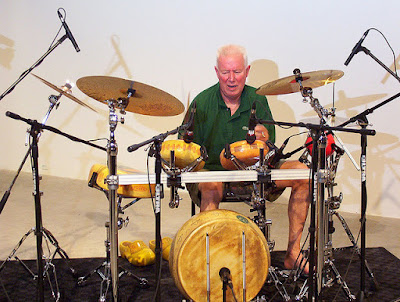 In fact in the world of free jazz drumming, using cheese as a percussion instrument isn’t really all that outré.  Avant-garde drummers will beat on just about anything.  On Scott Walker’s song “Clara” from The Drift percussionist Alasdair Malloy is credited with “meat punching” though the picture below is Scott rather that Alasdair. 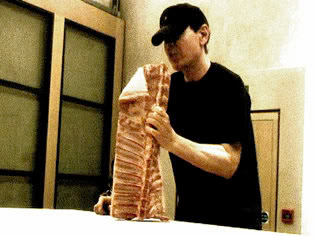 A playable trombone made of cheese – that would be really impressive, and although there are plenty of cheesy guitars in the world, even this one is only made of faux cheese. 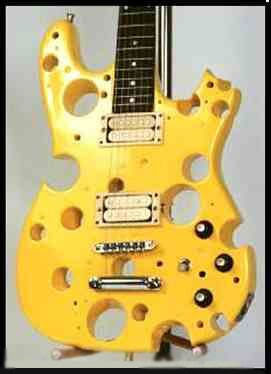 And finally a cheese that’s about as faux as a cheese can get.  I was in Trader Joe’s supermarket t’other day when they were giving out samples of Trader Joe’s Chocolate Cheddar Cheese, “a creamy mature English cheddar with rich dark chocolate curls.”  Now by and large I don’t like things in my cheese – some sage is OK in Sage Derby, a bit of red wine in Red Windsor is acceptable, but those cheeses that have cranberries or lemon or apricot in them, they seem to be missing the point.
But chocolate and cheese go well enough together in a chocolate cheesecake, and the sample I got in Trader Joe’s came with a slice of strawberry and a little sweet jelly.  I ate them together, enjoyed them well enough, bought a slab of the cheese, brought it home, opened it up, thought it looked pretty good, tried some, and it was absolutely foul. 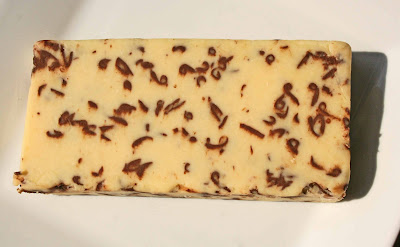 I think now that they gave customers the strawberry and the jelly in order to disguise the taste, and boy does it need some disguising.  It’s not very good cheese, and not very good chocolate and you put them together and the taste is vaguely, though not completely, nauseating.  You know that line in Douglas Adams about the Nutri-Matic machine that served “a liquid that was almost, but not quite, entirely unlike tea.”  This stuff is almost, but not quite, entirely unlike both cheese and chocolate.  Quite an achievement in its way.   So now I’m trying to think of some creative, possibly free jazz, use for it.  Perhaps I could smash it with mallets until it’s dead.  It doesn’t even have a collectable label. 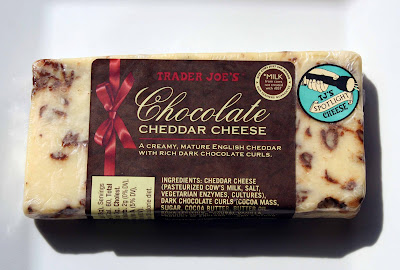 Posted by GeoffNIcholson at 6:45 PM