I went to the Red O restaurant on Melrose Boulevard last night, Rick Bayless’s  Los Angeles outpost, though scholars differ on how involved Bayless actually is with things there - not very is the received wisdom. 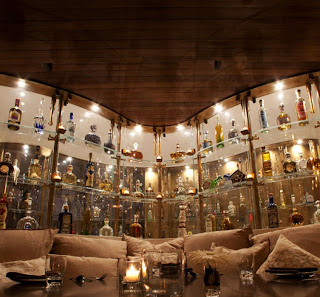 It’s a good looking room: that's the "tequila tunnel" you see above, the service was friendly if sometimes a bit fussy. the food was fine, the starters better than the main courses: the pork belly sopes were excellent, and the tamales with fresh corn, goat cheese and poblano chiles weren’t bad at all, though give me some goat cheese and poblano chiles on a square of carpet underlay and I probably wouldn’t complain too much.
The sopes looked like this: 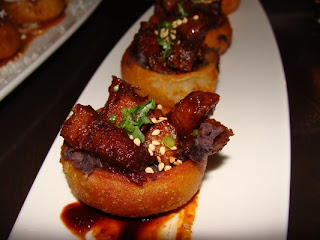 And the drinks were better than the food.  I had the La Dama Margarita “tres agaves reposada tequila, Serrano chile, mango grenade, lime juice and pomengrate liqueur.”  It was great: sweet and sour, soft and aggressive, fruity and fiercely  alcoholic, all at the same time.  I see that the drinks menu (which I just looked up online) also says the drink comes “garnished with pomegranate seeds” which may or may not have been there, but if they were I didn’t notice, and if they weren’t I didn’t miss them.
Somehow I managed to resist the $100 Red O margarita which some people (one or two of them employed by Rick Bayless) will tell you is actually cheap at the price.  It contains three kinds of fancy extra-aged tequila and some top shelf Grand Marnier, though as discussed elsewhere in this blog I have my doubts about putting really expensive booze in a margarita, in much the same way that, for instance, I’d have doubts about making a brandy and Babycham with Remy Martin Louis XIII Black Pearl Limited Edition.   But since I’m never going to be in a position to do it that who’s to say I’m right?  Maybe if I was rich and stupid enough I’d be washing my feet (or someone else’s) in Krug. 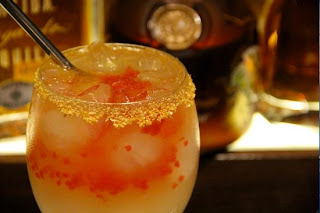 Something else that ups the price of the Red O $100 margarita is that the rim is coated in kosher salt and gold leaf. Ah me.  I’m always fascinated by the “most expensive” this and that – like the world’s priciest hamburger or the world’s most luxurious sandwich.  It seems kind of ludicrous to me.  I mean if you want to up the price or any food dish, all you have to do is slap on an extra dollop of caviar, or add another layer of gold leaf, or for that matter.  Where’s the sport in that? 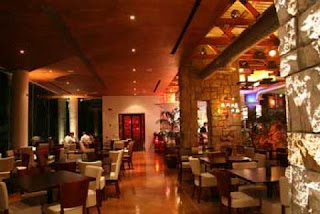 When I was staying in Guadalajara a couple of years back, the hotel bar (the hotel was the Victoria Express, the bar was the Bistro Garden, very Mexican-sounding, right? - that's it above) served a nice line in beer-based margaritas.  I’d never heard of such a thing till then, but I know I don’t get out much.  They were really (perhaps surprisingly) very good.
Of course nobody is ever likely to pay $100 for a cocktail containing beer. But then again some of us aren’t all that keen to pay $100 for a drink that has gold leaf round the rim.
I just dug out my copy of Rick Bayless’s “Mexican Kitchen: Capturing the Vibrant Flavors of a World Class Cuisine.”  It contains just three margarita recipes, none of them involving gold leaf, nor pomegranate seeds for that matter.  But it does contain some of Bayless’s “philosophy.”  He writes, “It’s my conviction that good wine and good food … are natural allies.”  Gee Rick, you’re really courting controversy there, ain’t ya? 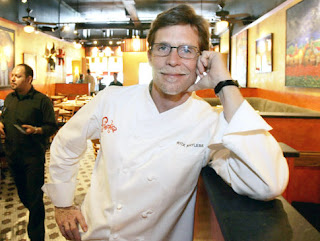 Posted by GeoffNIcholson at 9:06 AM