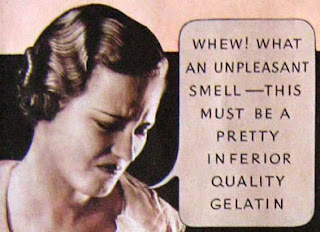 Not all gelatin or gelatine (those are the US and the UK spelling variants) is made from pigs: there’s kosher gelatin and halal gelatin, but much of it is. There’s no such thing as vegetarian or vegan gelatin, but there are non-animal thickening agents which get the job done; agar and carrageen among them.  Bompas and Parr, the Jellymongers, are resolutely carnivorous in their jelly making, there’s a famous interview in the Guardian in which they’re asked “Vegetarians: genius or madness?” Bompas replies, “Madness! Totally rubbish! Why would you deny yourself something so delicious?” Parr adds. “AND they can't eat our jelly.” 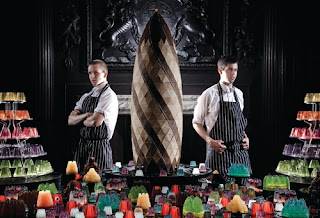 Sam Bompas and Harry Parr, since we’re on first name terms, get called various things, from architectural foodsmiths to the future of British gastronomy.  I assume somebody somewhere has called them charlatans, but I’ve ever actually seen a bad review for them. They operate on the borders of art and food, between food as event and as chemical experiment, somewhere between Damien Hirst and the Galloping Gourmet. They’re deeply involved with the history, science and technology of food and taste, but they make it a lot more fun than that sounds. 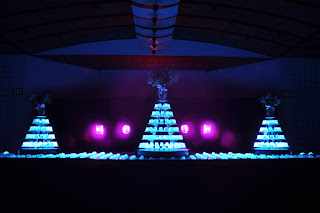 To date they’ve been responsible for various projects including a “History of Food” banquet, which began by analyzing the guests’ “humors.”  They did a scratch and sniff showing of Peter Greenaway’s The Cook the Thief his Wife and her Lover (bad meat, old books etc), an exhibition of glow in the dark jellies at MOMA in San Francisco, a model of Richard Rogers “gherkin” building made of gingerbread, and they’ve attempted to reproduce, or perhaps reinvent, the shield of Minerva (sans lampreys alas).
I’ve just written about them for Gourmet Live, and that should be coming out soon, so I’ll try not to repeat myself.  But I was keen to meet up with them, since the Venn diagrams of their interests and those of Psycho-gourmet seem to have a certain amount of overlap. 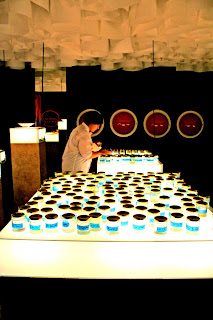 I met them at their “artisanal chewing gum factory,” a pop-up operation they’d set up in Whiteleys in London.  It was a sell out event, in which you paid your money then got to make your own gum, and flavor it with 2 from a choice of 200 flavors.  I went for Hendricks’s gin and ambergris, but much wilder options were possible: wormwood and wasabi, myrrh and hotdog, sea urchin and beer.  Mine looked like this; yes, of course it's strange and misshapen, that's what we mean by "artisanal." 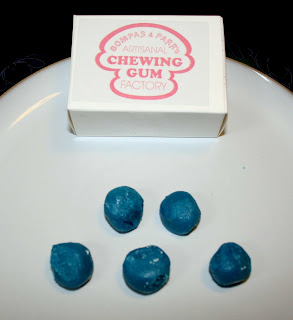 A couple of days later I watched them doing an in-store demonstration at Fortnum and Mason’s food emporium.  They handled the event with great aplomb, but I think I wasn’t really seeing them at their best.  And the fact is, the process of making jelly isn’t much of a spectator sport, since there’s usually a gap of a couple of hours wait while the jelly sets.  The phrase “here’s one we made earlier” comes in handy. 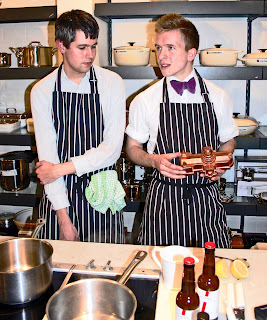 What interested me was that although Bompas and Parr are very concerned with the mystery and mythology of food, they’re also in the business of demystification.   Everything is possible: nothing is too difficult.  So they insisted to the in-store punters that there was no great trick to making jelly, you just pick your liquid, add your gelatin, wait a while and that’s pretty much it.  Of course it helps if you have strange and interesting flavors and it’s even better if you’ve got a few quirky jelly molds such as the one of St Paul's Cathedral that Sam Bompas is holding in the picture above, but in the end it’s food, not rocket, science.  Below are some typical jelly lovers at the event. 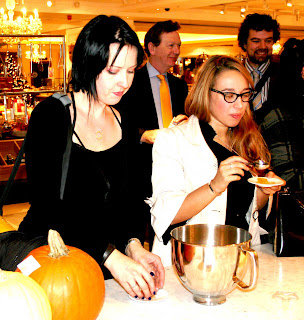 So, back in California, over the weekend, in honor of Bompas and Parr, and with a few tips from their rather wonderful book called simply Jelly, I made myself a couple of jellied vodka and tonics.  The lads use leaf gelatin but I used the powdered stuff I got at the local supermarket.  As I understand it, leaf gelatin has to be chopped up and melted in a double boiler, but I just mixed mine in to a cup or so of quickly boiled tonic, made sure it had dissolved, added the vodka, then topped it up with cold tonic, dropped in a slice of lemon, put it in the freezer and in about 90 minutes I had it, though I didn’t have it very long. 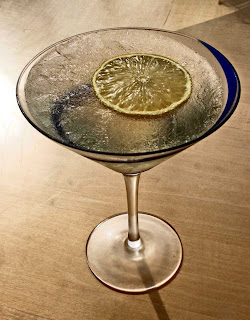 I suppose this really isn’t a million miles away from being a Jell-O shot, which isn’t exactly sophisticated, but I liked that it still looked very much like a glass of vodka and tonic, and it tasted not entirely unlike one too, and in some ways it tasted better.  The jelly retained and intensified some of the effervescence of the tonic, so that as the jelly touched the very front of the tongue there was a strange fizzing sensation, quite different from the fizz of an actual mouthful of tonic water, and in many ways far more mysterious and exciting.  I’m not sure if this was what the Jellymongers had in mind, but for a psychogourmet it was just perfect. 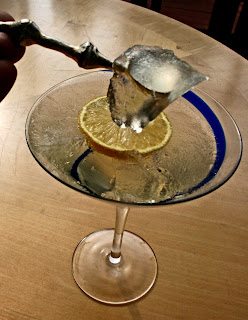 Posted by GeoffNIcholson at 12:39 PM