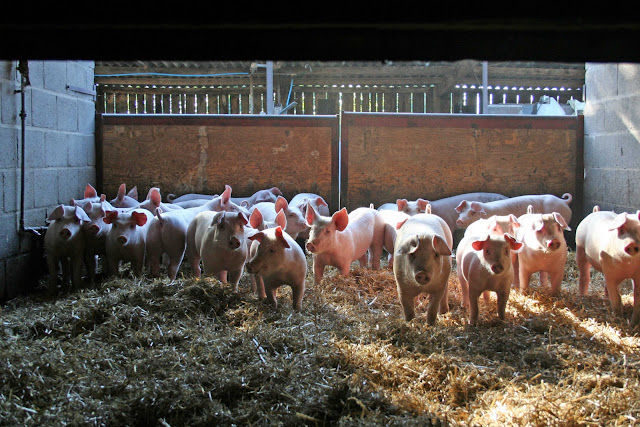 When I told my friend and British publisher Jeremy Beale (who lives in more or less rural Essex) about my pig experiences in America, he said he knew a couple of people in adjacent parishes who kept pigs, and it would be easy enough to arrange a tour next time I was in England. It sounded like a good idea, though I had to ask whether I’d be visiting some Empress of Blandings style idyll or a factory farm of death.
Jeremy said they’d be neither factory farms of death nor back to the land rare breed fetishists (his term) but fairly middle of the road, responsibly housed pig units where, other than when farrowing, pigs had a bit of space to move around in. He reckoned a visit would give me a pretty good idea of a well managed English pig unit.  When I was in England I took him up on it. 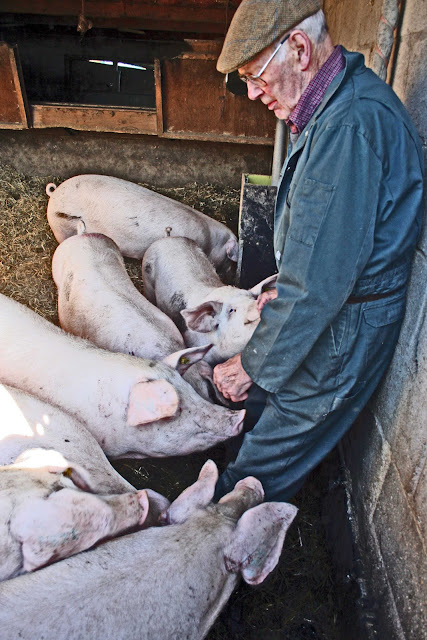 Our first host and tour guide was Tom Pitt from the village of Good Easter. He, along with his sons, keep pigs in three locations around the area, in slightly old fashioned but perfectly respectable facilities, mostly barns of one sort and another. The Pitts are essentially in the business of producing sows.  They first get their sows, Landraces, from a company called Rattlerow Farms, whose website while insisting that they’re family owned, also says they “employ a team of world class geneticists to run and monitor the breeding programs and guide research projects.”  Why did that make me think of Dr Moreau? 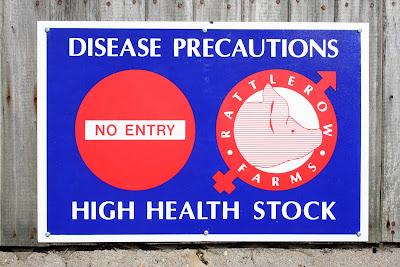 Anyway, the Landrace sows arrive and are artificially inseminated with Duroc semen (Durocs are big brown, solid Canadian beasts), they get pregnant, deliver a litter and the resulting Landroc sows (called gilts if you want to be precise) are kept for a while then shipped back to Rattlerow for further breeding. But, of course, nature produces males and females in more or less equal numbers so all the males born on the farm, plus a few imperfect females, become bacon pigs, but Tom and his sons are only in bacon production by default. 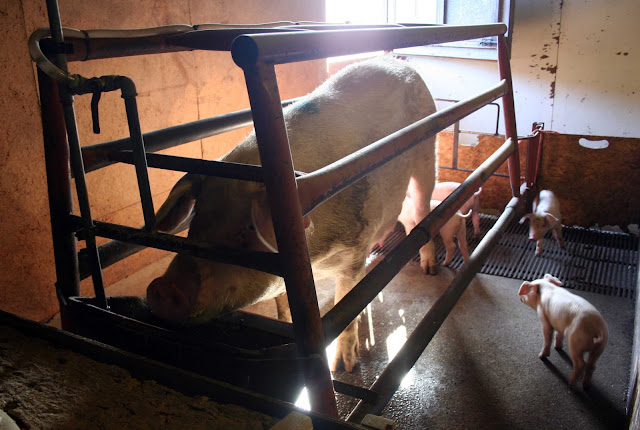 I understood Tom to say we’d be looking at about 2000 pigs but it seemed far more than that to me.  Tom reckoned there was no great mystery to keeping pigs but you did have to be scrupulous about mucking them out.  A couple of hours, three days a week with a power hose was what was needed to keep things clean and sanitary.  And certainly his pigs looked clean enough and were as free from smell as any farmyard animals are likely to be.

Tom obviously cared about his pigs, constantly touching them in a friendly reassuring manner, though he kept his fingers well out of the way of their mouths, and he kept an eye out for the ones who were being bullied and not managing to get enough food.  Of course this wasn’t simple altruism: sickly, undersized pigs were a financial liability. Even so his concern seemed genuine.  The pigs in their turn, and maybe I’m projecting here, seemed very reassured by his presence.  They certainly came running across the pens to see him.  In my own case they immediately ran away when they saw me, but then their curiosity got the better of them and they came running back. 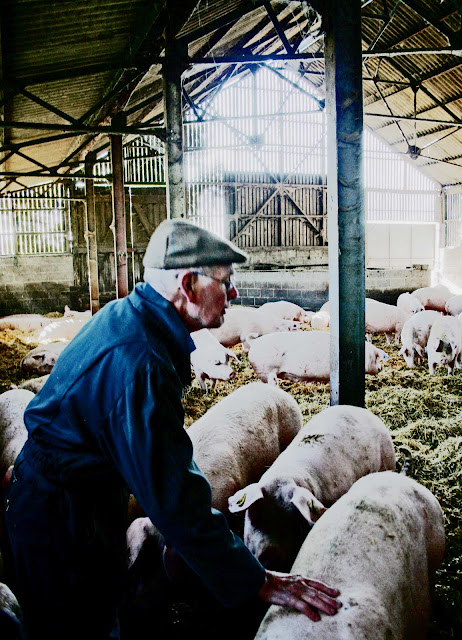 As a matter of fact, a mature, pregnant sow is quite the force of nature, and when we went into the sow barn (seen in the picture below) the prospect of being trampled under trotter seemed quite likely. Tom did indeed get knocked over by one of his sows, but I think it was because she was so pleased to see him.

These pigs were neither free range nor organic. The story is that in an Essex winter the clay soil which freezes very hard, and free range pigs damage their feet as they dig around.  These pigs lived largely on concrete and straw and since most of their feed came from local farmers that don’t produce organic crops, inevitably their pig feed wasn’t organic either.  Even so, Tom reckoned his pigs had a pretty good life and it was hard to disagree.  He told us he’d had requests to supply suckling pigs to a local butcher, but he wouldn’t do it.  He wanted his pigs to have some life before they were slaughtered. 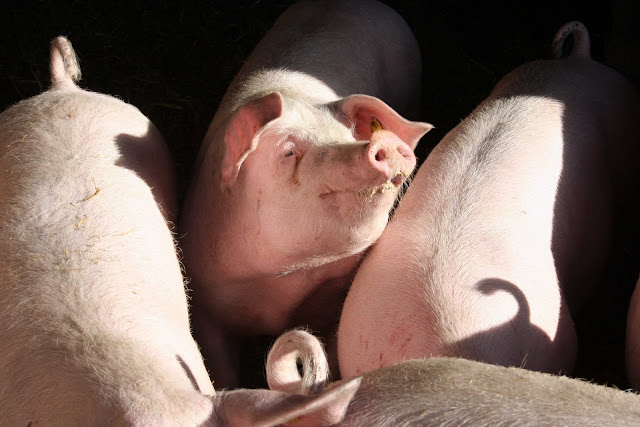 Of course it’s all too easy to read character into the faces of dumb animals but I was struck by the extent to which there was great variation in the pigs’ faces, and some looked far more alert, intelligent and endearing than others. The appeal of keeping a pig in the back yard certainly reasserted itself.

Later that afternoon, after Tom had completed his tour, we walked round the local area and went to view a mature Gloucester Old Spot being kept as a pet at a place called Yew Tree Farm.  This pig was undoubtedly free range, he had a ton of room, living in a veritable porcine Xanada.  I also wondered if a lone pig might be rather lonely, since pigs do seem to be social creatures and great snugglers, but apparently there was another companion pig lurking out of sight in the barn. Then we went to see another half a dozen Old Spots being kept quite literally in the garden of a house belonging to couple called Nicky and Andy.  As you see, there wasn’t much garden left by the time the pigs had made themselves at home.  If pigs ruled the earth, the whole place would be a quagmire.

Like Tom, Nicky and Andy also made pig-keeping sound a pretty straightforward activity, though they admitted for them it was less a business than a hobby, but as hobbies go it definitely beats stamp collecting.  They hadn’t been raising pigs long and so far had barely made a profit, but the demands for their pigs was high: all the ones we were looking at had been presold.  You paid 300 quid, staked your claim, then waited while the pig grew up, and in due course it came to you slaughtered, butchered, cut into portions and plastic-wrapped.  The biggest problem they said was loading the pigs onto the trailer before you took them to the slaughterhouse.  Maybe they didn’t want to go. 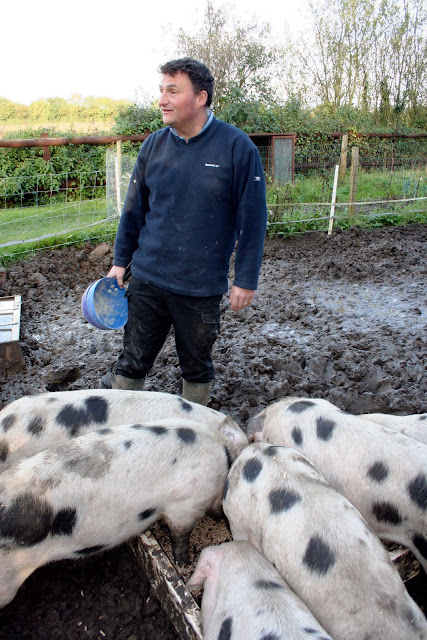 We had roast pork for dinner that evening, though obviously it wasn’t from any of the pigs we’d seen (I was going to use the word “met”) that day.  The link between the pig on the farm and the pork on the plate doesn’t strike me as a particularly problematic one, though of course the actual process of slaughtering remains unseen and mysterious, and we’d much prefer it that way. Needless to say, I don’t do my own slaughtering, and I don’t want to, but you know, I don’t do my own plumbing or oil changes either.  Of course we don’t want to make pets of the animals we eat, that are killed in our name, but it’s not bad to be able to look your pig in the eye and be assured that if his death is inevitable, and for your benefit, his life was pretty good, at least up to the moment he got loaded onto the trailer. 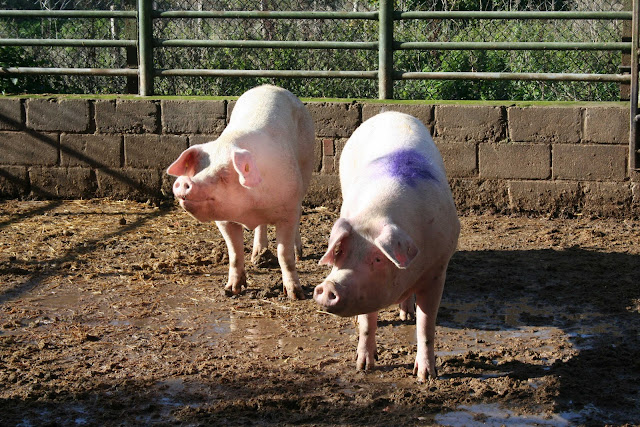