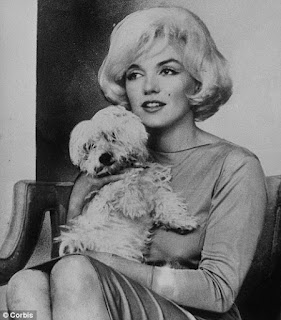 Apparently there’s something in the air about Marilyn Monroe right now; or maybe there always is.  I just got sent a copy of a novel by Andrew O’Hagan, called The Life and Opinions of Maf the Dog, And of His Friend Marilyn Monroe. The book is, as it were, a fictionalized “memoir” by Marilyn’s dog, Maf, (short for Mafia Honey), a mutt given to her by Frank Sinatra.

Marilyn doesn’t do a whole lot of eating in the book – mostly she drinks champagne – but she does do some.  There’s a meal eaten in her car in the parking lot of a “Jack-in-the-Box chicken joint,” and there’s a terrific scene at Musso and Frank where she’s with Sinatra, Natalie Wood and a “hoodlum chum” of Sinatra’s called Frank DeSimone.  Sinatra keeps telling Marilyn to have the Shrimp Louie, the zucchini, the spaghetti with meat sauce, but all she wants is rice pudding.  Incidentally all these items are on the current menu at Musso and Frank.  I assume O’Hagan is a smart enough novelist to have checked that they were also there in the early 60s; and given the restaurant’s resistance to change, it seems entirely likely that they were. 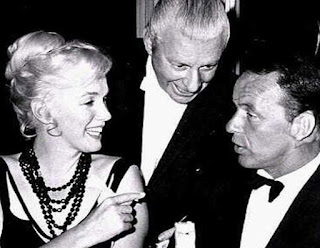 Maf meanwhile, being a dog, eats whatever he can get: cakes, “small casseroles,” Twinkies, pretzels, nachos, sausages, Friskies and a “plate of morsels” at the Plaza Hotel in New York.  I don’t know if a dog would consider this good food or not, though Maf certainly doesn’t complain. 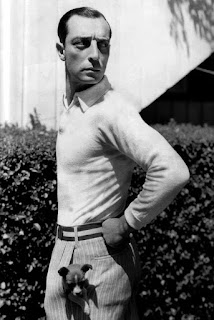 Canine eating habits have been on my mind somewhat lately since I’ve been pursuing my intermittent Buster Keaton obsession.  Keaton was one of the few actors who seemed to enjoy performing on screen with animals, and in his real life he had all kinds of pets including a number of St. Bernard dogs, all of them called Elmer, which was the name of a character he played in some of his movies.

Keaton said, “Elmer did his own shopping.  HE would look a butcher in the face until the guy couldn’t stand it and would throw him a steak, the best in the house, and then charge it to Keaton.  Elmer ate three lunches at MGM – the original expense account dog.  He lunched at my bungalow at noon, with Marion Davies at one, and with the executives at two.” 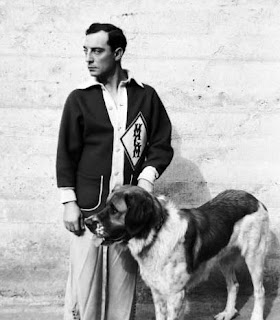 Few dogs, even in America, eat as well as Elmer did.  For that matter few people eat so well either.  And of course we know that even the average American mutt eats better than a great many people in the world.  I’m always simultaneously amused and outraged by those “premium” dog foods, all natural this and organic that.

At the same time, of course, there are cultures that are happy to eat dog. And I started to wonder what these dog eaters feed to the dogs that they’re going to eat.  A lot more research is required on that one, but I did find an intriguing reference in Calvin W. Schwabe’s Unmentionable Cuisine.

He writes that when early British and American explorers arrived in Hawaii, the locals couldn’t understand the westerners’ attitude toward dogs and pigs, why one was to be a faithful companion and one was to be food.  The Hawaiians kept both as pets, and they also ate both of them.  What did they feed the dogs on?   Well, I don’t have a complete answer, but according to Schwabe, the Hawaiian women suckled both piglets and puppies, which I’d have thought was taking even the pet thing a bit far. 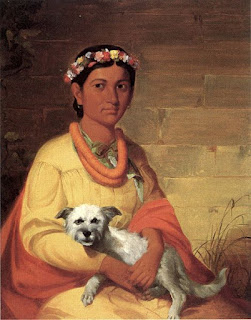 Safe to say that Buster Keaton didn’t eat his dogs, but he was a great lover of gadgets and machines, and at his ranch in the Woodland Hills, he had a model  railroad.  According to Eleanor Keaton, “The toy train came out of the kitchen on a track that ran the length of the pool alongside the fence, and curved over a trestle to a round table.  We used to deliver soft drinks and hot dogs to guests.” 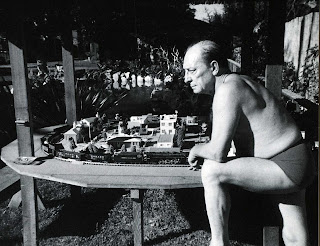 There are a thousand and one reasons to love Buster Keaton, but this isn’t the least of them.
Posted by GeoffNIcholson at 9:29 AM