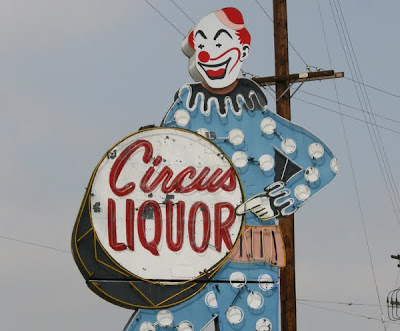 One of my regular readers, name of Lydia, points out that Conan O'Brien has been twitting about Circus Liquor, in North Hollywood, at the corner of Burbank and Vinleand Boulevards. I know it well, and drive by it once in a while, and I had thought of including it in my post about clown-related consumption.

The reason I didn't was that I don't have a my own picture of the sign, and although there are many fine ones online, most of them are very recognizably the work of particular photographers and I'm being careful about just filching things off the web.

Howeevr, since Conan's giving it away for free on twitter, here it is.

Conan's caption reads, "This is down the street from where we're rehearsing. I guess nothing sells liquor like a maniacal circus clown."

By the standards of some of the clowns on cereal boxes, it seems to me this this guy looks amazingly benign.
Posted by GeoffNIcholson at 4:48 PM