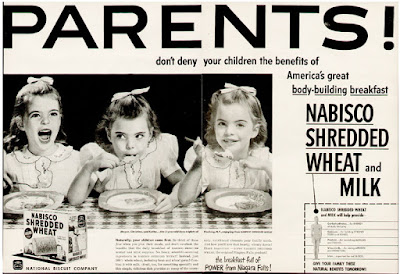 A more worldly set of kids would have realized that the Top Cat theme would have been unlikely to celebrate the joys of dripping. Hanna-Barbera were the go-to guys when it came to providing cartoon characters for sugar-rich, child-targeted cereal. I admit I fell under the spell. 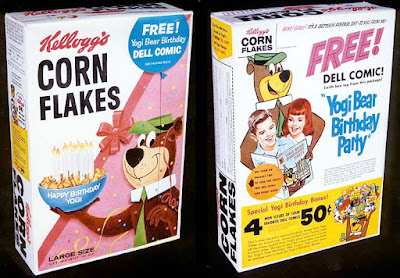 My memories are imperfect. I do recall various cereal boxes with Yogi Bear, Huckleberry Hound and Quickdraw MacGraw on them, but I have no memory of which character went with which cereal. I’d have said Yogi Bear was associated with Sugar Smacks, but it seems I’m just conflating bears and honey-eating. He was actually on the Cornflakes box, but we never ate cornflakes in our house: not sweet enough. 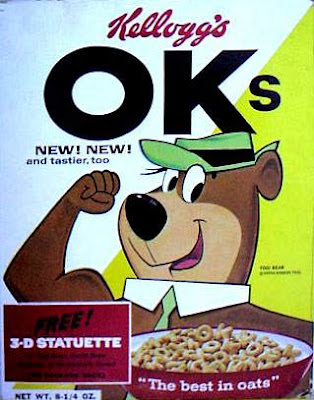 However, he was also on the OK cereal box, which I think we did have in the house, but I have no idea what it tasted like. Apparently it was Quickdraw MacGraw who was on the Sugar Smacks box. The association between children and any kind of “smack” of course now seems blissfully decadent. 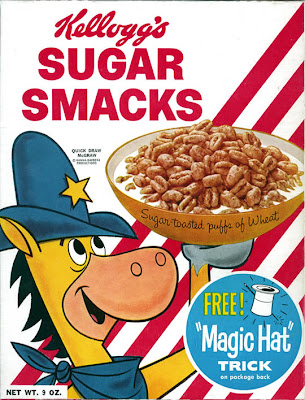 I can’t really understand why I ate this stuff with such enthusiasm, because I wasn’t a big fan of Hanna-Barbera cartoons. Even as a kid I could tell there was something a bit crappy about those repeating backgrounds and the canned laughter. When I got to know Jay Ward’s Rocky and Bullwinkle, it was obvious that here was something far smarter and more grown up. 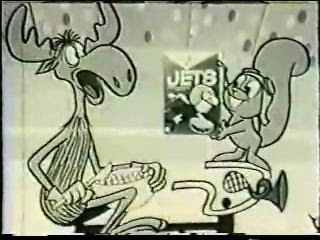 Rocky and Bullwinkle, I discover, appeared on packs of Cocoa Puffs, Cheerios, Trix and the alarmingly named Sugar Jets. I’m pretty sure Cocoa Puffs and Trix were available in the UK though I don’t recall seeing any Rockie and Bullwinkle packs, the rest may not even have been available there. Boris and Natasha appeared on Lucky Charms from 1950 to 1962, Sherman and Mr. Peabody shilled for Wheat Hearts. Again, these were unknown quantities in my childhoods, and possibly only sold in America. If I’d known about them I’d definitely have wanted them. 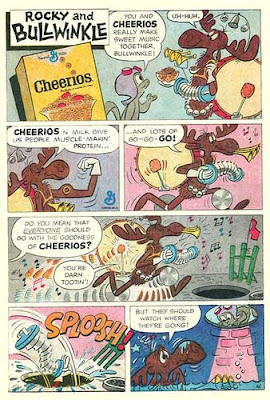 Visiting my local supermarket here in LA the other day I discovered no sign of Rockie and Bullwinkle but Cap’n Crunch (another of Ward’s creations) is still very much with us, now with added peanut butter. There were also the Flintstones, Tony the Tiger and the Snap, Crackle and Pop kids. 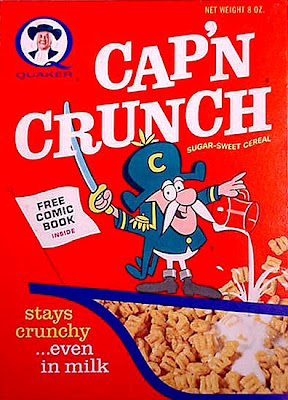 The amazing thing is that these characters are about 50 years old. Where are the modern replacements? Sure the Simpsons have appeared on Butterfinger, and Sponge Bob seems to have some special relationship with Burger King, but when it comes to cereal it’s all very old school.

Partly, I’m sure, it’s because cereal companies have decided that trying to fill the kiddies with sugar isn’t the most caring, health-conscious marketing strategy right now. Life cereal (which I confess I’d never heard of) makes some claims for healthiness and has real live children on the box rather than cartoon characters – I can’t work out if that’s more or less exploitative. 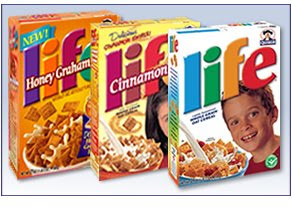 But my great discovery in the cereal aisle, and I now know that this has been much mocked elsewhere, was the kashi-based cereal called Good Friends. Again the boxes feature real live humans, and they seem to be promising racial harmony and (very possibly) miscegenation. What kid wouldn’t want that? 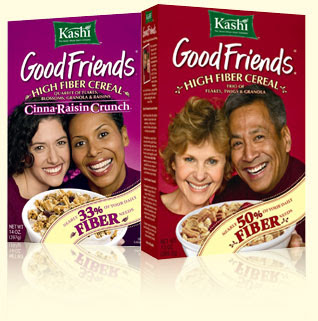 Posted by GeoffNIcholson at 11:41 AM