“So, what did you have for lunch?” It’s a common enough question, but how often do you get to say, “Oh, I had the goat nayama choma served with kachumbari and ugali and collard greens.” 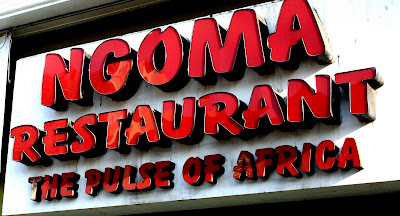 Well if you go to Ngoma, a pan African restaurant at 5358 Wilshire Boulevard here in LA, that’s exactly the kind of thing you can say. You might also add, “My companion had the beef ugalini sukuma wiki. 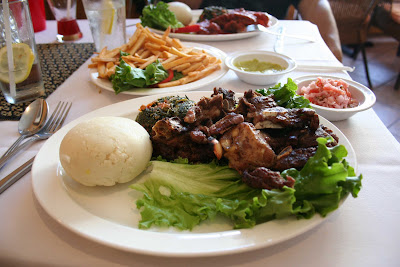 And the food was really good. Ugali is that white sphere on the left of the plate, made from white cornmeal.

As far as I can tell (my source here is www.congocookbook.com) nayama choma just means roasted meat, and my goat had been rubbed with spices and probably marinated; and it was delicious with something quite bacon-like about it.

Sukuma wiki I discover is a Swahili phrase meaning literally “push the week,” a way of combing leftovers. Ours came with a huge quantity of tender stewed beef. And I guess if you wanted to question the restaurant’s authenticity you might say that surely nobody in Africa ever eats a fraction of the meat we were served. Still, they obviously know their meat-loving American market.

The list of appetizers included Dodo, and you can imagine my excitement, but this turned out to be African for fried plantain. 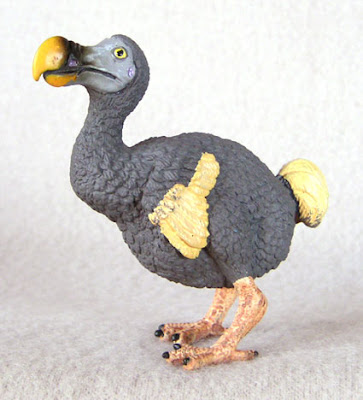 The food was all very good. It was the rest of the experience that was so peculiar. We got there at one pm, and the restaurant was completely empty with no sign of any staff, but after a while a very shy, polite African woman appeared, took our order and then disappeared again. We were prepared to move slowly; we knew we might be working to “African time,” and we also suspected that our waitress might also be the cook, which would slow things down further. But as the meal went on things slowed down more and more.

Two more tables filled up, and our girl came and went to take orders and deliver food, but her appearances were ever fewer and farther between. But after a while our food arrived, and we had no cause for complaint.

Then after we’d been in there about an hour, and had finished eating, a rather annoyed-seeming black guy in a wheelchair bustled in, and waited for the waitress to appear; and she never did.

We waited for twenty more minutes or so. She didn’t come to offer the guy a table, didn’t come to ask us if we wanted anything else or to leave our check, didn’t serve any of the other tables. It did cross our minds that she’d had some terrible accident in the kitchen or perhaps that she wasn’t the cook, and was in the back getting up to lord knows what with someone who was.

We’ll never know. By then we’d had enough and we left some cash on the table and went on our way; not unhappy but a little confused. The wheelchair guy had had enough by then too and followed us out.

As we were leaving we noticed the banner mounted above the door. 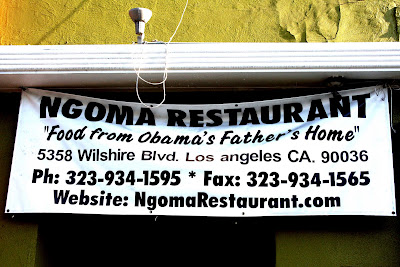 We couldn't understand why that wasn't packing them in.
Posted by GeoffNIcholson at 3:43 PM