Still on the subject of what a sago fork actually looks like, correspondent Matt D draws my attention to a book entitled “The Mafulu People of British New Guinea” by Robert W. Williamson, first published in 1912.

Part of the text reads, “Their (The Mafulu’s) only eating utensils are wooden dishes and small pieces of wood, or sometimes of cassowary or kangaroo bone, which are used as forks, and pieces of split bamboo, which are used for cutting meat; but these latter are used for other purposes, and rather come within the list of ordinary implements, and will be there described. They also use prepared pig-bones as forks;”

And then there’s this photograph: 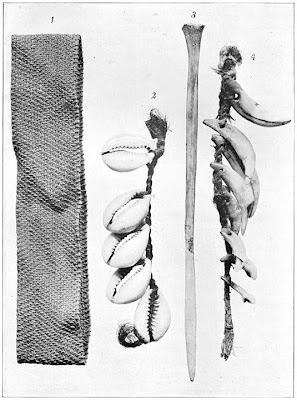 The caption for item number 3 reads “Bone implement used (as a fork) for eating.” Now only a fool would argue with a text of early 20th century anthropology but it looks more like a skewer than a fork if you ask me.

There are quite a few other plates in the book including this one captioned “Types of Men:” 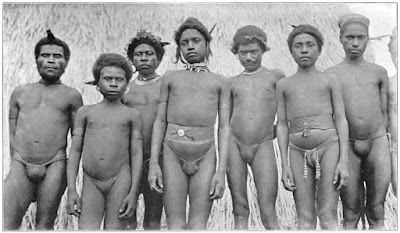 I studied these hoping to find a picture of a man with a fork in his hair, as per Richard Wrangham, and they certainly seem to have some odd things in their hair, but nothing that I'd swear was a fork. The mystery remains unsolved as far as I can see.

The book can be found at Gutenberg.org


Also someone sent me this image of a Star Trek titanium spork: those guys sure did have some cool collectibles. 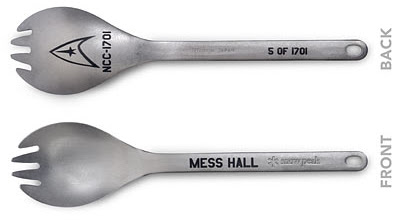 Posted by GeoffNIcholson at 4:16 PM